These past month had been fully in the name of performance improvements, feature adding and especially documentation. I don't go into much text here since the documentation part is where the big huge text is located for those interested in both the inner engine workings and especially how to developer with this game engine. This produced lots of documentation especially for the DragonScript language in form of API documentation and Wiki documentation. Now included is also the first demo application for the new features. More will follow to get you started with the game engine. But from the technical point of view what ate the majority of time had been a tremendous performance improvement workover that touched many engine areas. Various performance improvements including Parallel Processing and an advanced OpenGL render thread system consumed more time than expected but the result is a total performance boost of up to 150% over nominal this spring. There is still some room left especially in foreign code not that much under my control. And if this would be not enough already the Drag[en]gine has now also a whole new Canvas System. So before the Links to all the information a little view across some of the parts touched during the past time. 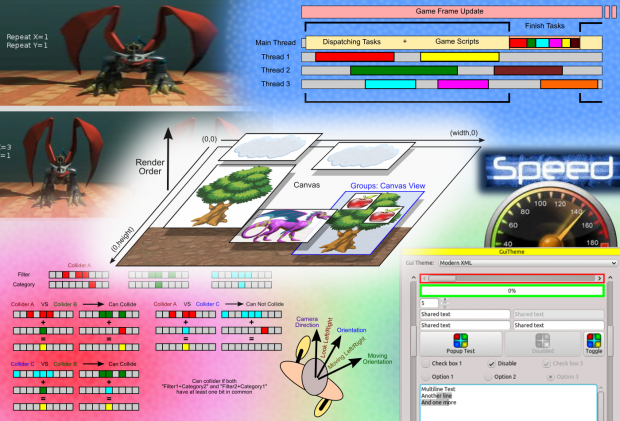 Show it to me!

As you noticed there is no big content update. Since I had been all occupied with all the tech and documentation and I still have no helping hand except myself I could not also deal with content. So if you are from the artistic domain and you want to do something else than what is usually around you are welcome to step forward. No portfolio fillers. I had enough bad experiences with those.

So happy game-deving until the next time.

Still loving your engine! So much work and planning you put into all this - it is remarkable. What would help you contentwise? Perhaps I can help? I'm not looking to expand my portfolio. 3D is more or less just a hobby to me now. Kind of a shame, but I am writing movie scripts as an alternative ^^

There is actually quite a bit of movie scripting going on but without the 3d models and animations to back it up it's too early to go into details there. That kind of stuff has to come first.