Get a Life was released Apr 25, 2008 by a french development team. Its stock full of new weapons and enemies and is easily the longest source mod next to the various SMOD's. Yet do these pro's hold up against all its cons?

NOTE: Get a Life is extremely hard to find on the mod list because the word "Life" makes it disappear in all the various HL1 and HL2 mods, along with its incredibly subtle avatar. There is also a big chance youve never heard of it, so heres a link:

Anyway, lets get started :) First of all, I have extremely mixed feelings about this mod; some things I love, yet other things I despize. As stated in the description, it is probably the longest HL2 singleplayer mod next to the SMOD's, which dont really count. It also has good custom content, and some very well-made maps. Yet flashy maps and interesting models dont make a mod, and in many other areas, this mod quite frankly falls on its face. To start, the mapping: 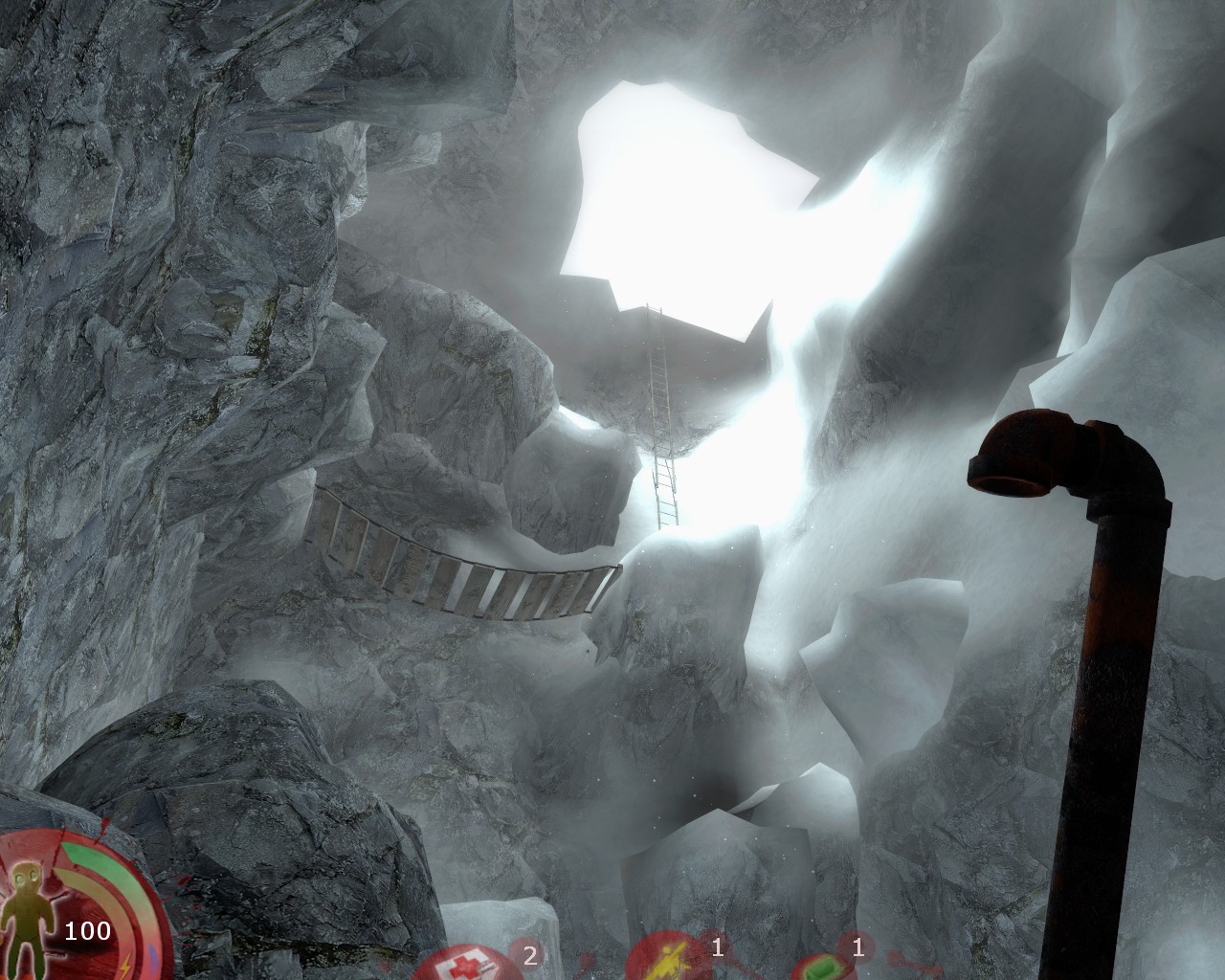 The mapping for this mod, especially for one made in 2008, is excellent. Its well detailed, has relatively good layouts, and pretty good lighting. Various new props have been included (many of which from CSS...) that make it have a special touch. The locations are interesting, ranging from icy secret bases to underground caves to wrecked tankers. The atmosphere is great: There is one part where you journey through a sunbathed town of happy people, only to go back through it at night when it has turned into a zombie-infested hellhole. To say in short, its a well-made series of maps that just ooze atmosphere and look simply fantastic. Unfortunately, some seem a bit better made than others, looking a lot more detailed. This is probably a result of the massive amount of different mappers; I just wish it were evened out a bit more. 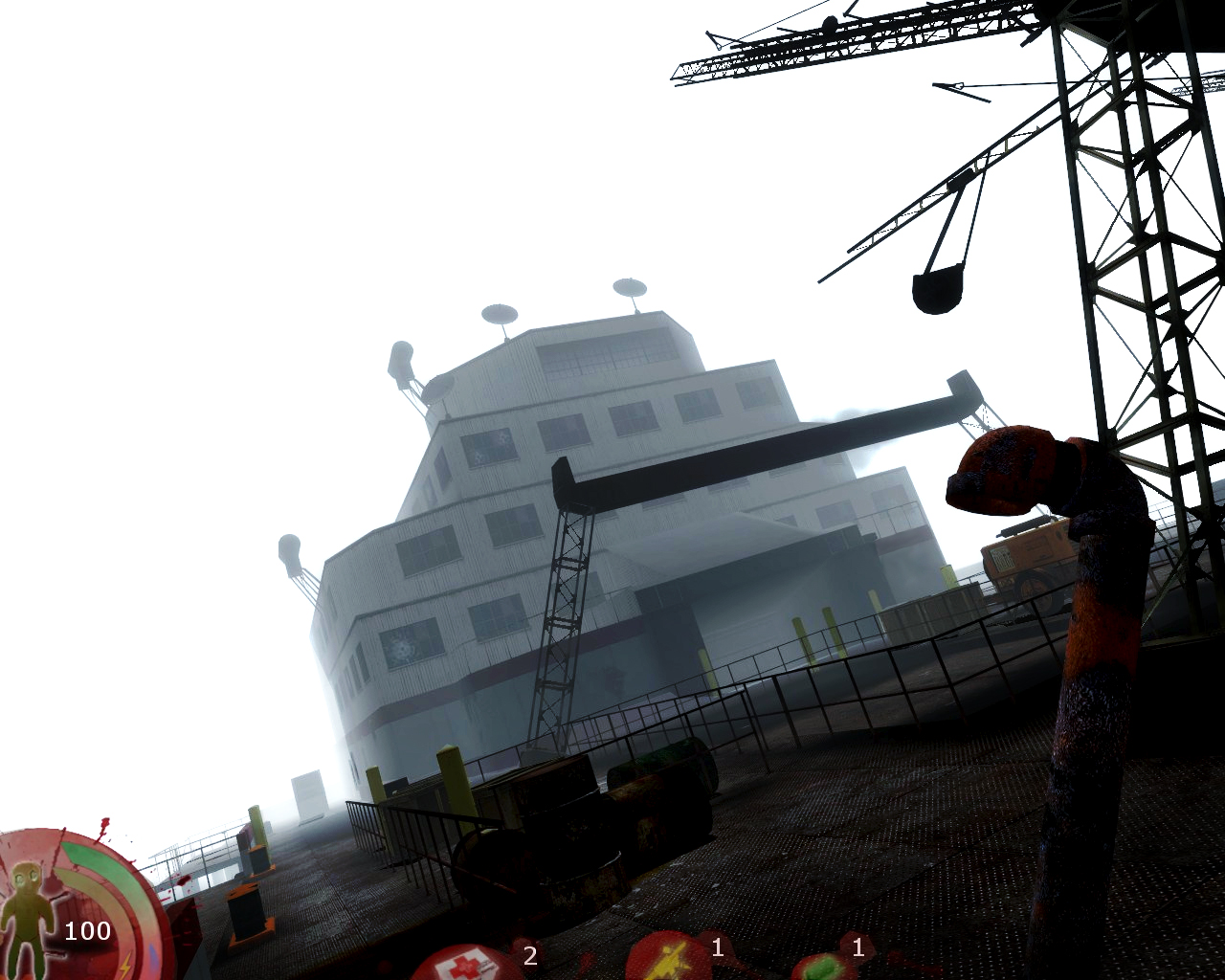 Gameplay in GaL is in some ways new to mods, and is in some ways so old and overused you practically couldnt get anymore generic. The unique bits are mainly in the menu: The medkits can be saved for later, proving useful in a firefight. There is also a "max payne" styled drug that slows time down, but their bullet-time isnt anything to get too excited about. They have an incredibly annoying bleeding mechanic that is just there to be... annoying? It also has a system where your body parts have seperate health stats, and the more these vary the more the game changes. When shot in the head, you get dizzy, when shot in the arms, you get less accurate, and when shot in the legs, you slow down. Its pretty generic, and I would usually say "at least they have it", but I wont. The whole new system feels rather needless and annoying, but at least its different. Some people may love this, some people may hate it. 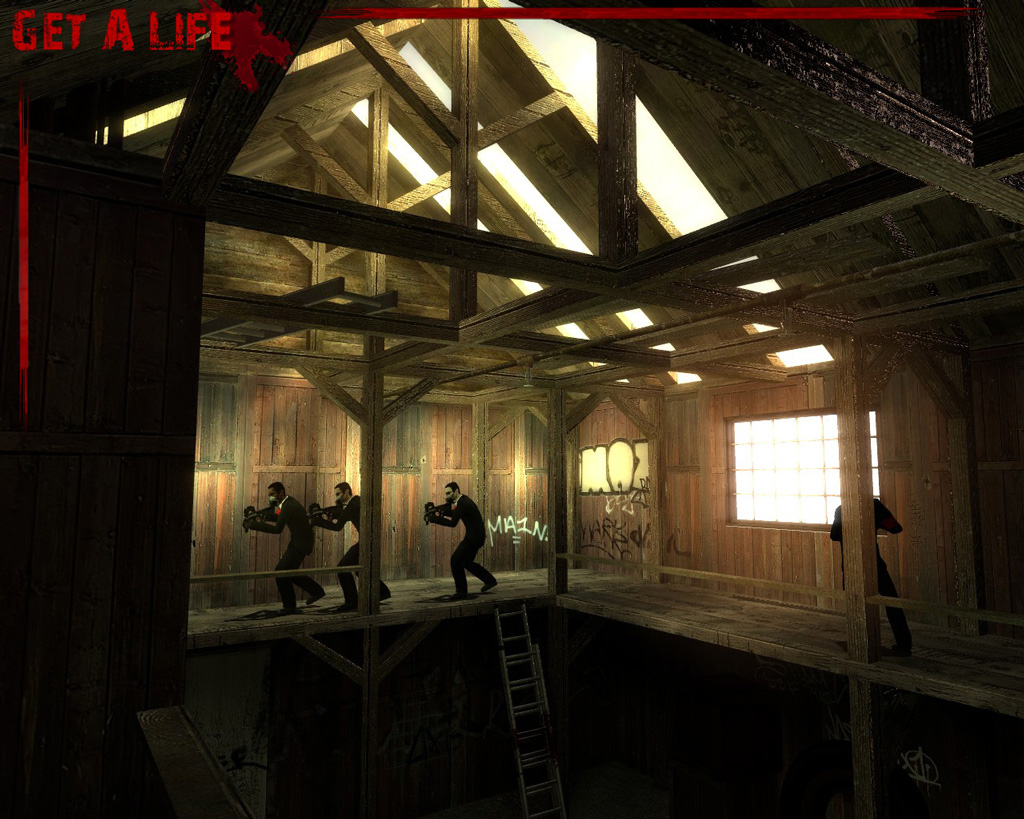 But hey, who cares about a wacky new health system if the rest of the gameplay is great? Well... This is pretty much that, and only that. The combat is nothing new. You fire until the enemy stops moving, and you really dont do much else. I do admit that the weapons do make it very satisfying to take down enemies, but it still doesnt remove the fact that there are really no puzzles, and the few that exist are an annoying pain in the ass. They also have these messages scrawled here and there you can read; they are usually very long, boring, and put in relatively small print surrounded by wear and tear making it incredibly hard to read. These are purely made to move the story along, and while that is understandable, perhaps they couldve been shortened and made more interesting. 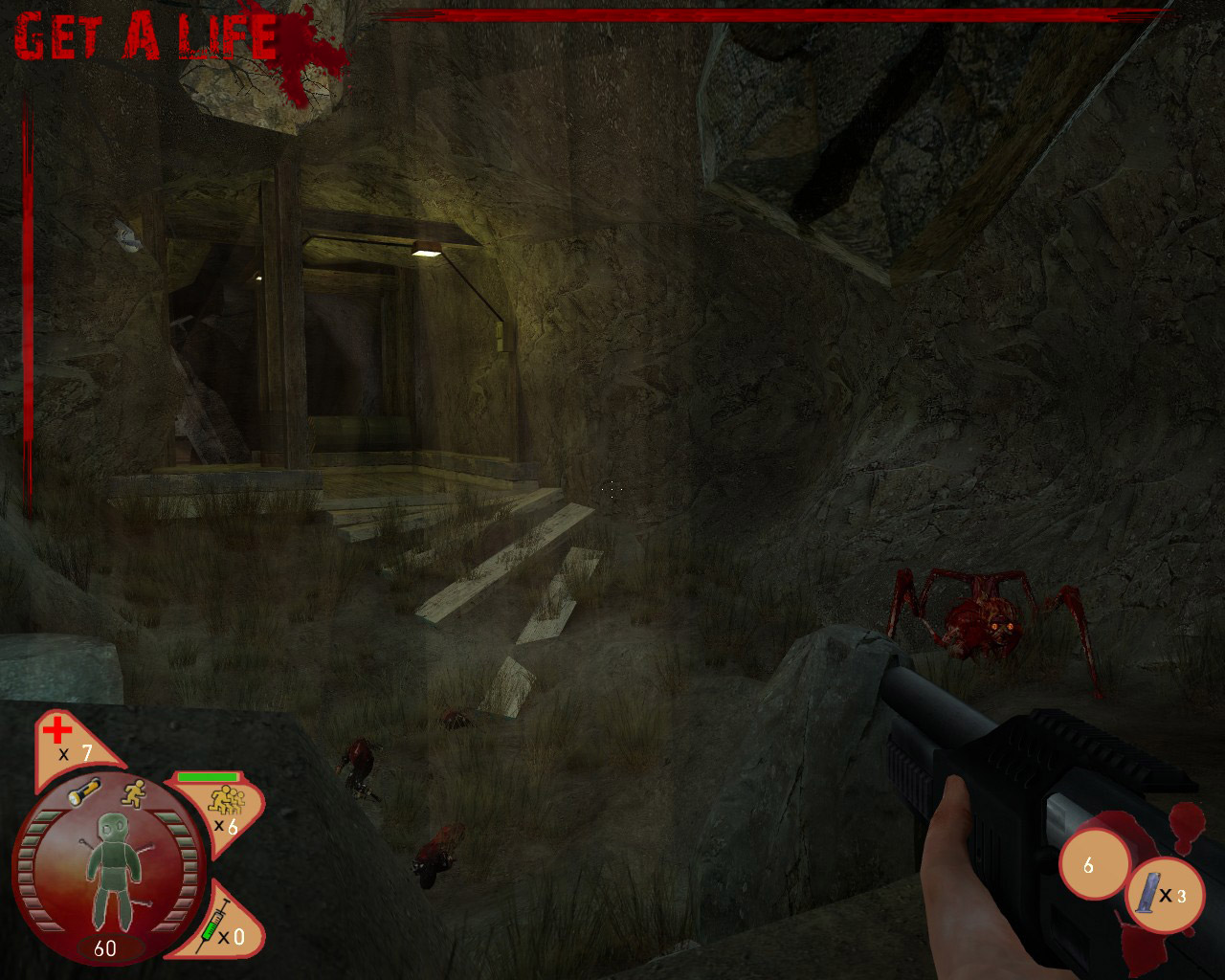 Now on to the models. Unlike most of the rest of the gameplay, these models are excellent. They are well polished and are visually appealing in many ways; they are also given good sound effects, and as mentioned before, make taking down the bad guys very satisfying. Both the guns and the enemies look great. If you just love new models in mods, then youve hit the jackpot. 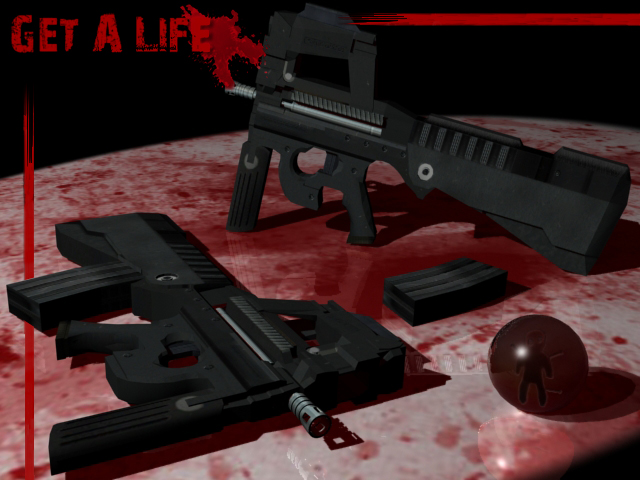 Gameplay has a few good areas, but a lot of them need improvement. It wouldnt have taken much to make the mod a whole lot more engaging and interesting. Though to be fair, as far as most mods go, they arent too bad.

This is where the mod really bombs. They tried to make a story, but failed horribly at it. It may partially be because I didnt pay too much attention to the scripts scattered around the mod, but you cant expect a whole story to be driven by a bunch of boring notes you dont even have to read. It involves some sort of orginization trying to exterminate a zombie threat but for some reason trying to kill all the people as well, and some weird thing where you are being cloned and somehow producing zombies or something. It makes little sense, doesnt come to a clear conclusion, and isnt very well told. Sorry GaL, but for a mod that is 7 to 10 hours long, that doesnt cut it. It may be language problems, but I dont think so. At least they tried, but I would expect more out of a huge mod like this.

Overall, its an interesting mod, but could use a lot of improvement. The one thing I can say about it is this though: It doesnt feel like most mods. It has a cerain... shape to it that I cant really describe. It may be the strange enemies, the confusing storyline, the semi-surreal maps, or a combination of all of those, but it definately feels "different". This is a mod that is very long, but can also be taken as overstaying its welcome. So I'd say you try it out, its just worth playing for the atmosphere and mapping. Just dont expect a totally well-rounded mod. 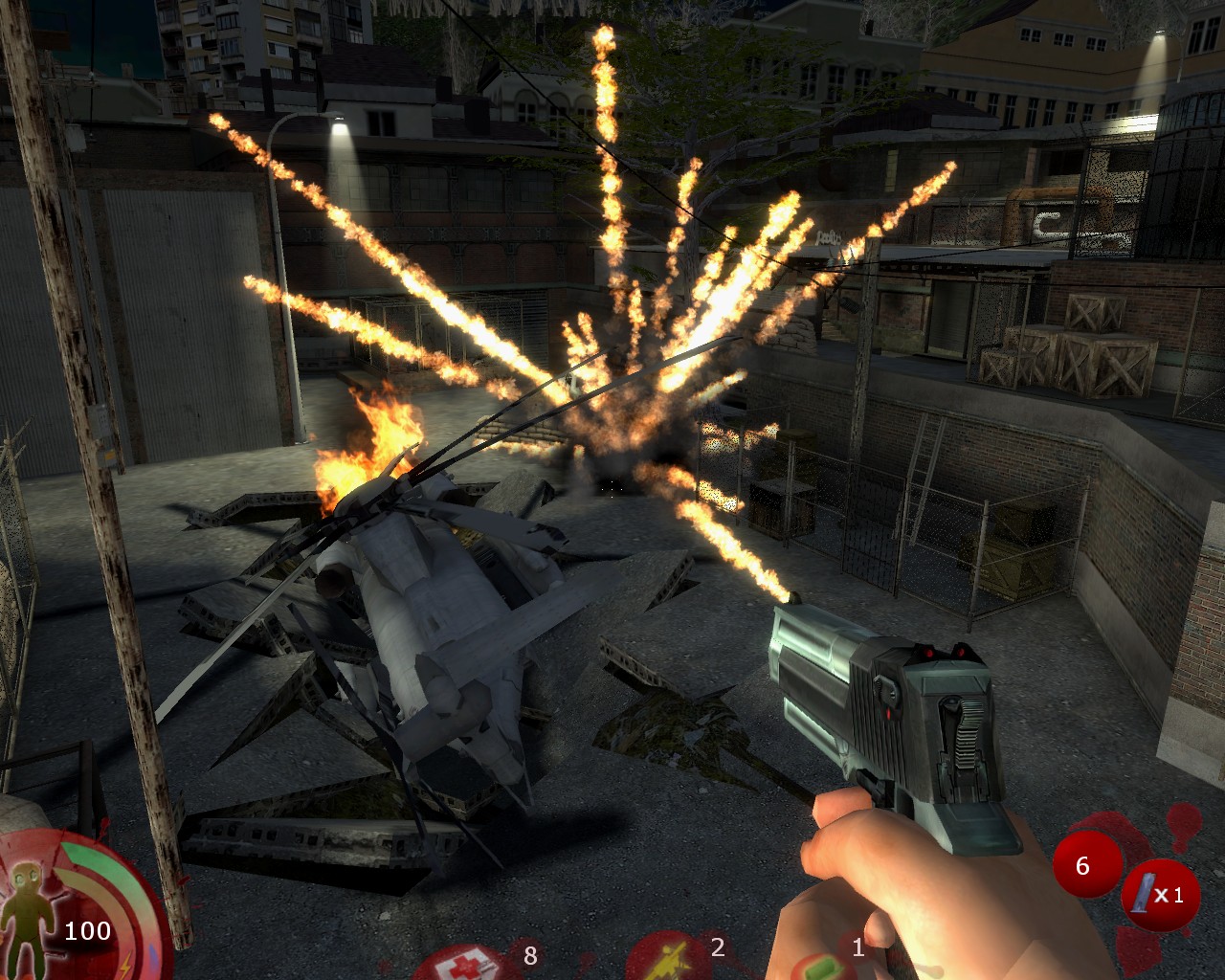 Get a life is so awesome! I really enjoyed playing it but i played it somewhere in 2009 and too bad this mod is not so popular anymore cause its old. :( 9/10

All animations are default/CSS. The origins of the deagle fails massivly (just look up), but I liked the fuckups they did with the guns (pickup lazer, silencer etc.)

Waste of time, but kinda worth it.

Exactly how I felt lol.

I really want to play through this mod but for some reason it always quits on some engine error or graphics error (or whatever) and it's really annoying. :(

Yeah, that happened a few times. Try reinstalling it.

That fixes it?
I was desperating for some months and this is what to do to fix this??
C'mon..^^

It was just a suggestion, I dont know if it works.

Well I played it and boy, I wouldn't give it a 7. (contains minor spoilers)

- The mapping was pretty good, strong at some points, weak at others but some of it really didn't make much sense, like how they connect to each other. Seriously, How much more catacombs and underground system does this town has? I didn't feel like I was going anywhere like (unlike HL2 where I had missions or Nightmare House 2 where I had to escape)
- Custom content is also in the pros expect from the shotgun model, it's a bit cheap to me. The grenade not having a sound was new yeah, but also annoying. The g-man squad shouldn't be equipped with those.
- Custom monsters is a so-so. They are mainly HL2 ones reskined like the cookie-cutter, different haircolour g-man squad. Given a new model and +500 (See hell annoying Flesh zombie-antlion) But the fact that they are original is a definite plus. Also I HATE SPIDERS!!! WHY THE F#&@ DID THEY HAVE TO RESKIN HEADCRABS AS SPIDERS?!!! GAAAAAAAAAHHHH *khmm* sorry about that.
- They have almost invisible soldiers and they the most stupidest infantry in the game. What invisible soldier would stand in front of a firefight? -_-
- Voice acting = horrible. But at least they have voice acting and subtitles too, which is always a plus and they didn't do it with a text reader (yes, I'm looking at you Portal: Prelude)
- As Raider said, the story doesn't make sense. Like you have a sister in the story, why didn't you searched for it when you are in the evil guys base? Why does the evil guys have a base in the (Ant)Arctic when the story takes place in a town in France or Spain? Also what is with the spiders? Where do they come in the picture?
- Well at least the horror parts where scary, but that flare gun was annoying. At least it could have light enemies on fire. I mean come on, that's the most fun thing to do with an in-game flare gun.

- The healing system was fun, but also annoying a bit sometimes, bleeding didn't happen too much so I was always full of bandages, and I really almost never used the bullettime. I just didn't get used to it in HL2 games, it was way to slow and short to make any sense for me, but it was well executed. Also the weapons could have used module system instead of 2-3 weapons of the same kind with different attachments, or just simply make it delete the old one. And why did we lose it twice on the ship? Like when the ship went sideways and our weapons supposedly had to fall into the sea. I had to reload the game around 5-6 times for like getting stuck and what not. -_-
- Death animation where long. I want to load there quickly and not wait for 2-3 seconds to see while seeing my stupid slowmotion death.
- Totally unsatisfying final boss battle. It was so dull, that it was really a let down.

...And then the protagonist dies. Great. Really worth it -_-
And why the freakin' hell they want to nuke the **** out of everything as we see in the ending? Haven't they ever read this article? Cracked.com (Yes, I know they couldn't have read it back then in 2008.)

So all in all, it was an... well above average mod and I really tried to enjoy it, but once when I got to the surface for the 156th time (before the exploding train part) I realized that "Hey, this mod is too long, and I still playing it although it doesn't worth it"
It was much better then "Go and shoot mountain" (Or was it "Strider mountain"? Whatever) and it had somewhat better story and better content, and I would recommend it over "You didn't collect portal data? Then f*ck you Mountain" at any time as a time waster, but only as a time waster because it's not a really serious mod. It would needed much more work and some puzzle elements.

I agree with most of your points, its just that it had a very special, different, and interesting style. Btw, for you information, its not strider mountain. Its "Strider Anthill", mainly because of the lack of being able to TELL YOURE ON A ******* MOUNTAIN.

Hmmm, even if mods don't deserve it, I feel that you should at least try to pay attention to all the details of the game to make sure that no hidden elements undermine your review.
But at the same time I feel pretty much the same way for the mod. Excellent mapping, screwy story. 7/10 fits the bill.

Ive played it twice, and there arent any "hidden elements".