It's been a long time coming, but here's the fourth in our alien reveals...the Lerk! 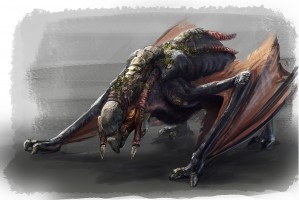 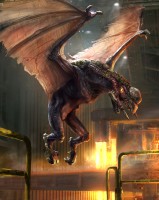 We thought it would be cool to imbue the new Lerk with a wildness or craziness, which we thought would fit with his sudden movements and fast changes in direction (we rejected this concept). We also though his drooping, hanging form would give him a unique silhouette and allow him to be expressive when landing and taking off.

Final Render
Here's a shot showing the high-detail model before it's been textured: 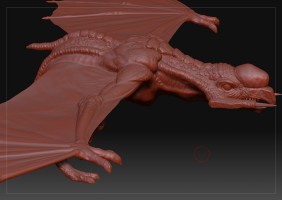 ...and here's the final textured version: 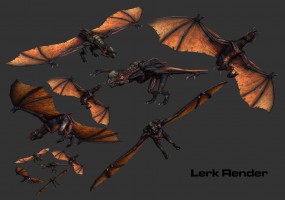 You can see in this render of the finished Lerk model how closely he matches the concept. We still need to make his wings translucent (one of the last features left in our engine).

Gameplay
As the primary ranged and support fighter on the alien team, he's able to shoot spikes or clouds of spores. He is the most nimble alien with the ability to fly, glide and roost.

The biggest change for the Lerk in NS2 is the switch back to spikes instead of bite (as in NS v1.0). We wanted to keep him as differentiated as possible and this seemed the easiest way to do it. It also doesn't seem very Lerk-like to have him fly up to a structure and then sit on the ground and bite it. He should be hiding in the rafters and in vents and attacking from range.

Spikes So his main attack is a rapid-fire spike attack. These don't have the super-long range as they did in NS v1.0 which means the Lerk must be in medium range to do damage to its target. The spikes fall with gravity and have some spread to them. They are good against marines and structures alike, although Skulks are more effective at bringing structures down quickly.

The alt-fire for spikes is new, although many community members will recognize it as an ongoing feature request. Alt-fire zooms his view and changes his spike attack into more of a sniper attack. This will let him hide in dark places and pick off marines. We also plan on adding a cool bit of flavor with this - if the sniper spike kills a marine standing near a wall, the spike will impale him up against it.

Spores The spore attack works like NS1 - it shoots a spore projectile that becomes a lingering spore cloud where it hits. Any marines in this spore cloud take damage over time. This is a great area control weapon and should allow Lerks to try to force marines out of an area, or prevent them from entering an area. We will probably still have heavy armor marines (info coming) be immune to this spore damage. We currently don't have an alt-fire attack for spores but are open to suggestions!

Roost We plan on allowing the Lerk to hold his crouch key when near a ceiling to flip upside down and roost there. When roosting, his view is upside-down and he's able to spike and spore from above. This is something I really wanted in NS1 and I can't wait to see it in NS2!

There are a couple upgrades planned for the Lerk as well, including Adrenaline, which increases his energy recuperation and Piercing which adds extra damage (and a satisfying "crack" sound) to the spike alt-fire.

Here's a video showing the completed Lerk in action:

It looks like it would be a challenge to combat...
Great work.

I saw this hours ago, I was wondering when it would show up on ModDB!

Perhaps, an alternate for the spore could be a "normal" cloud that covers a large area for a while that doesn't harm and only aliens can see through, to make it fair, you could make it with a long cool down.

Isn't it better for the worker alien to release a smog for it to run away or plan a attack? Smogs are basically smoke screen...

Yeah I also like the idea of a visual obstruction cloud like smoke or smog. Or even some rapid shroom growth on the ground that would slow down anyone who walked through them. Or maybe the shrooms would be explosive and cause any marines to get dazed if caught in the blast. Although the marines can shoot them to bust them prematurely. As long as the cool down period was long enough and the range wasn't too long this would add some tactical benefits to the class. Just some of my goofy ideas that may not be properly balanced ;)

Either way this looks great, keep up the great work!

How much poly have this model?

Lerk was always my favourite, good to see him back in action all pimped up XD

Very nice as always.
Keep it up!

would there be a demo for this indie game??

Your trailers are so cinematic i love them.

Don't take this comment the wrong way or anything, coz i adore what UW has done to the Lerk and most of my comments have been negative, but I'm not too impressed with the model , I'm not one to expect anything just would expect something a little more.... aggressive.

As someone who played Lerk a LOT in NS1, I love what you guys are doing with him. Although I do have to say, I expected the model to look a little better, other than that though... :D

Alternate fire for Spore idea - Fire a small blob onto the ground that releases the normal spore cloud when things walk near it at the cost of a large cooldown time.