Imperial tech split and a new way to make your frigates and cruisers valuable.

Before reading on, keep in mind everything discussed here is still in development, and will likely change to some extent before release.

One of our biggest focuses with this release has been on trying to alter the economy and the way people value their ships and infrastructure. We've been chipping away at this with each release, and 1.1 has a few more steps in that direction. A key part of the changes we're trying in that direction this release is the new Veterancy system for non-capital ships. Leveling has always been a feature of Capital ships and Titans, making them feel more valuable and giving a reason to try to keep them alive, but if anything, this has only ever made frigates and cruisers feel weaker, as the levels added more and more distance between their performance and that of the high-leveled capital ships. Frigates and cruisers essentially end up expendable.

Veterancy in Ascendancy works differently for Frigates than it does for Capitals. Capitals work exactly as they always have, of course (though we'll likely take another look at their stat bonuses for leveling up). This has nothing to do with the abilities, so you don't need to worry about the same micromanaging as you do for capitals; just make sure they're in the fight, and survive it. Essentially, every ship recently involved in attacking a target (right now we've got it at 60 seconds) has a chance to get a permanent stat boost when that ship dies. The numbers are still in flux so I won't give anything too specific, but for now this means after enough engagements, you can get a ship at roughly twice the damage dealt and half the damage taken as when it started, indicated on the unit card. This means that in some cases you can get, for example, a Victory II-Star Destroyer full of battle-hardened, experienced vets able to take on the green crew of an Imperial-class straight off the line. We're trying to reduce the overall number of ships you'll usually have on the map by a bit (with the Small-Medium-Large fleet sizes being more meaningful, for those who still feel the need for lag), and this is one the many changes we're trying to do to make those ships individually more manageable and valuable, alongside the supply changes we've mentioned before (pay-per-ship vs flat maintenance cost) and some other income-related changes (essentially, higher early game and much, much lower late game).

More on that later. 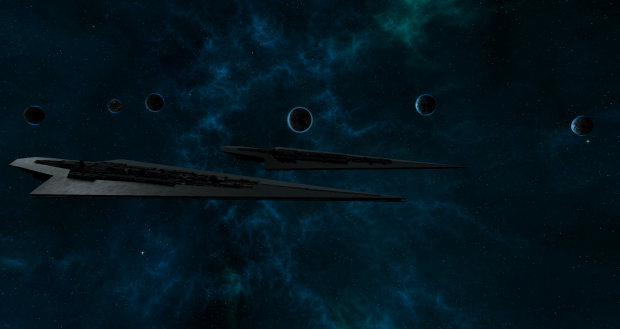 After Endor, the Empire was anything but one big happy family, and the leadership and its values were always in flux. In Imperial Civil War (ourFoC mod) this has always been a bit more obvious than in Ascendancy. Beore we split the original Remnant faction and its tech tree into the Remnant and the Pentastar Alignment in Ascendancy, there were a few more obvious branches and styles in how you could play the Remnant, but we had essentially shoehorned the Empire into a superweapon-centric playstyle without too many other options. We still want that to be an option for our more destruction-loving fans, however we want to represent the internal turmoil of the Empire a bit more as well. As a result, we've rejiggered their diplomatic tech (which, sidenote, every faction is having expanded a lot more in 1.1) and turned that particular page of the tech tree into the Regime page.

This page allows you to side with one of three sets of Imperial leaders and doctrines, each with their own unique advantages, disadvantages, techs, and heroes. This won't be an exhaustive list of what's available (we're aiming for about 10-15 unique techs per leader), but I've picked out some of the bigger ones to give a sense of what they do. We mostly won't say who the heroes are yet (we'll have a separate update for that), but you can probably figure most of it out. Our feedback from testers has been especially positive on this so far, so we're feeling pretty good about the direction this is going in. We tried to pick the three ways to divide this up that offered the best representations of different aspects or periods of the Empire. Sorry Isard. 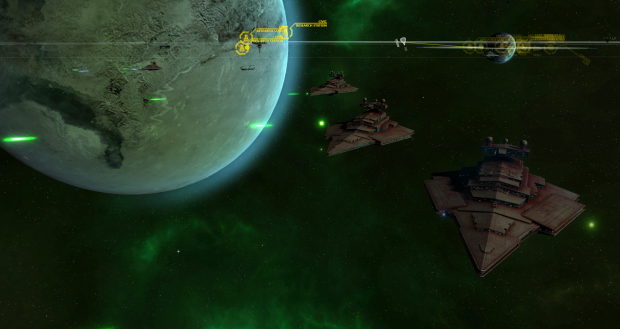 1. Admiral Natasi Daala
Daala is best known as the leader responsible for finally unifying the Empire. Although she lacked the tactical genius of Thrawn, she is highly determined and possesses a certain level of politically savvy, having convinced the likes of Gilad Pellaeon and Ivan Cronus to support her in the unification of the warring Imperial splinter factions.

Unique Techs/Units:
- Crimson Command VSDII: A more powerful and, most importantly, red version of the Victory II-class Star Destroyer. This can be available to her earlier in the campaign, allowing for a more powerful start for the Empire if you side with her.
- Maw Installation: This formerly-universal Imperial tech improving research speed is now available only to Daala.
- Metal-Crystal Phase Shifter: A unique weapon designed at the Maw which breaks apart the hulls of its target on the molecular level. Increases the damage output of your ships.
- Knight Hammer: Siding with Daala gives you only one hero; Daala herself, in the Knight Hammer. If you already have an Executor-class built, recruiting Daala allows you to have a second (however, if you already have Daala you're not able to build a second in the conventional way). Daala is also unique in that she is the only hero able to be recruited again after her death, as she escaped it herself so many times in the lore.

2. Grand Admirals Thrawn & Pellaeon
Grand Admiral Thrawn and his protege, Grand Admiral Pellaeon are arguably the finest strategic minds the Empire ever produced, and certainly the most level headed. They each had their own style, with the innovative Thrawn and the more traditional mind of Pellaeon, however each possessed a special talent to see the bigger picture of a given situation (even when that meant recognizing defeat). They shared a military philosophy that placed an emphasis on the ships of the line, detesting the large resource sinks of the Emperor and various Warlords. This branch tends to draw equally on each of their periods of leadership, since trying to make them each their own branch would be like splitting hairs and not including either of them would feel wrong.

Unique Techs/Units:
- Scimitar Assault Bomber: One of the more powerful fighters in the Imperial arsenal not named "TIE Defender," the Scimitar Assault Bomber is a versatile craft designed during Thrawn's campaign to retake the core which functions similarly to how it always has in Ascendancy.
- Mole Miners: An ability available to Star Destroyers, which deploys mole miners to enable the capture of enemy ships (with the cooperation of troop landers).
- Several techs available to Thrawn and Pellaeon related to opening of the Empire, giving them a cultural, diplomatic and economic leg-up over their counterparts (ie Mixed-Race Military and Pellaeon-Gavrisom Treaty).

3. Emperor Palpatine - Dark Empire
Emperor Palpatine's return marked the use of several different types of superweapon, and siding with him will be how you gain access to those for yourself. Palpatine's Dark Empire has a large capacity for destruction, but because it is so focused on a few key points of power, it also has the possibility of crumbling upon itself if they're taken out, as their use can help turn the galaxy and its citizens against you.

Unique Techs/Units:
-Superweapons: World Devastators. Sovereigns. The Galaxy Gun. The Eclipse (unique Hero; you asked for it).
-TIE Droids: An automated fighter around the same power as a conventional TIE Fighter, but which does not cost any fighter supply to create.
-Fortress Worlds: Two levels of tech which increase both tactical slots and the number of starbases you can build in a gravity well.

That about covers it. As always, if you have feedback or suggestions on anything we've talked about here or anything else related to the mod, feel free to leave it in the comments or post it on our forums.

looking forward to the new changes!

Love these ideas. I just hope veterancy will not be unlimited in power gain but has a cap somewhere, i dont want to end up with a victory that is as strong as a SSD. :D

Always a pleasure seeing what you come up with! :)

The limit is currently 20 stacks for 2x power/defense max

Gonna be weird playing as or against the EotH if someone chooses Thrawn to lead the Imperial Remnant.

Thrawn vs Thrawn, that would be a very interesting military campaign, wonder how it would turn out.

I don't think Thrawn will be a hero for the Empire of the Hand, because he never led it did he? He only founded it, so its more likely someone else will be the leader.

I think that is true, but even so, thrawn fighting against his own empire would still be somewhat odd don't you think? :D
If he should be somewhere is should be with the empire of the hand.

He founded it and led it until he returned to the Empire, so there's three years after Endor in which he was the leader.

At long last the Eclipse has cometh!

Will the AI choose at random what regime to pick or is it predetermined in some way?

Loving all the new ideas guys.

is there gonna be something like the malachor V ?

I always pictured and hoped a small fleet of some frigates, cruisers and a star destroyer with their fighters being a "threat". The amount of ships this game has required so far is really tiring, not to mention its effect on performance. Nice to see emphasis being on "meaningful smaller scale".

Agreed. In a lot of the books, and the Thrawn trilogy, emphasis was placed on support craft as much as ships of the line. The Rogue Squadron books showcased this extraordinarily well, where twelve X-Wing pilots with little to no support often pulled off unbelievable feats against impossible odds. Maybe now we can have games that bring a bit more of that special something. Thanks devs!

Please,for the love of Emperor, give Palpatine the Eclipse I, not the second model.The first (black) Eclipse is much more menacing and, in a way, more iconic (as in, more people, especially those who played the FoC campaign, will recognise it). I know it's all up to you, but please, just think about it.