Hello again commun. Just want to keep you guys updated of what's been happening this month. I've got some content and gameplay to showcase. And I also have announced a to-do list to get done by new-years.

Once again I encourage people to take a look at or join our site. Fpsterminator.userboard.net

HK mini:
Many people recommended to nerf the t800s to make the game more newbie friendly. but doing so would kill the feel of combating a T800 which have been known to be tough as hell. so one of my solutions is to create a cannon fodder enemy type and that is the HK mini. The HK mini are very small, fast, and aggressive targets, but can be taken down with just a couple shots of a standard plasma assault rifle. 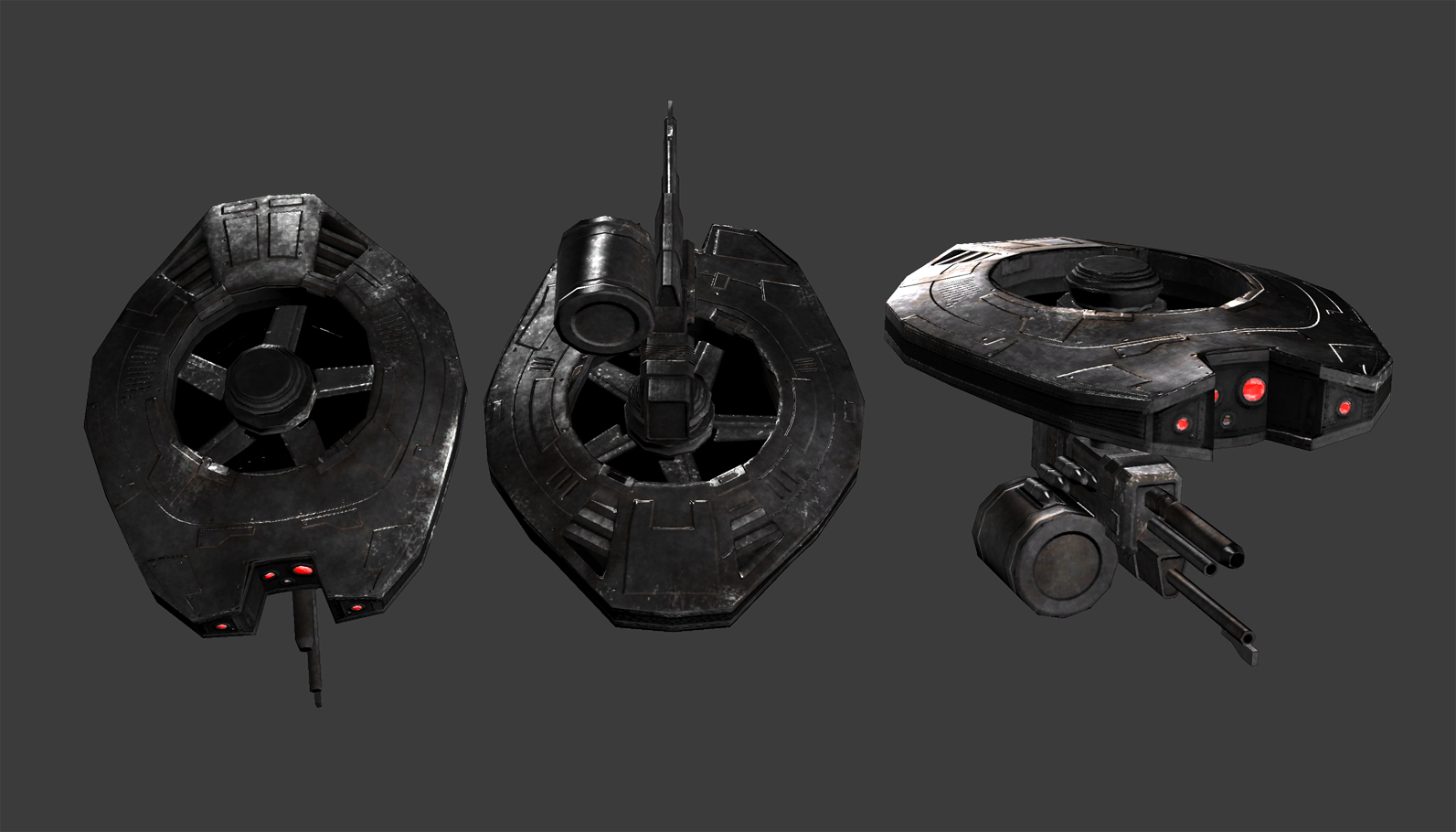 
This is an early combat test just to make sure the things work. and does not represent the intended difficulty of the enemy type.

HK Tank:
The HK tank Currently has no gameplay mechanics but is now render-able in game. the lowpoly with normals and textures. 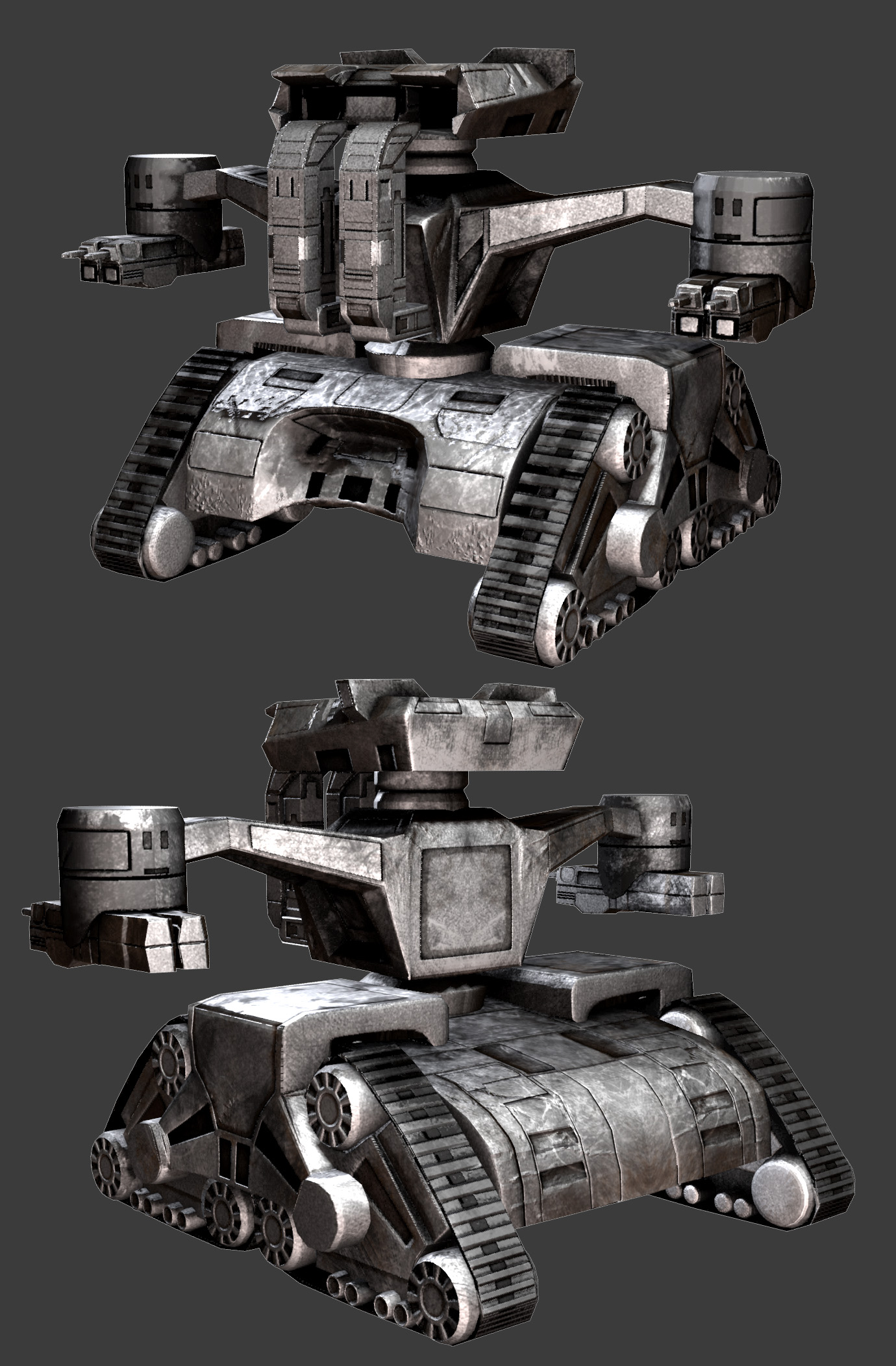 This is a render of the lowpoly but not in-engine. It's been rendered with 3ds max. 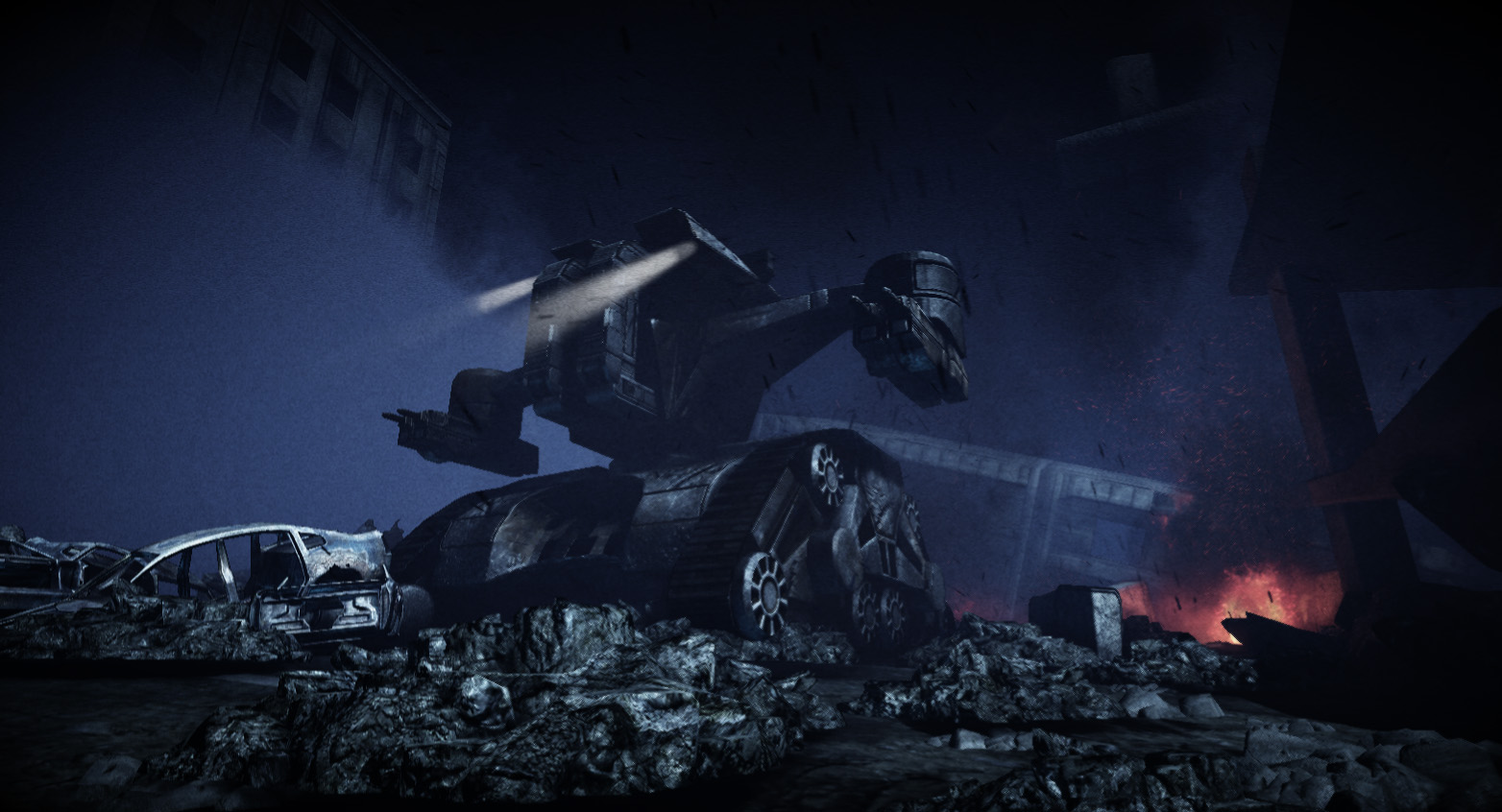 This is an in-engine render of the model.

Sinkholes:
One environment elements that will be seen in the LA level are transitions between the surface and underground holes of the earth that have been blown out. these sinkholes offer potential for vertical gameplay. 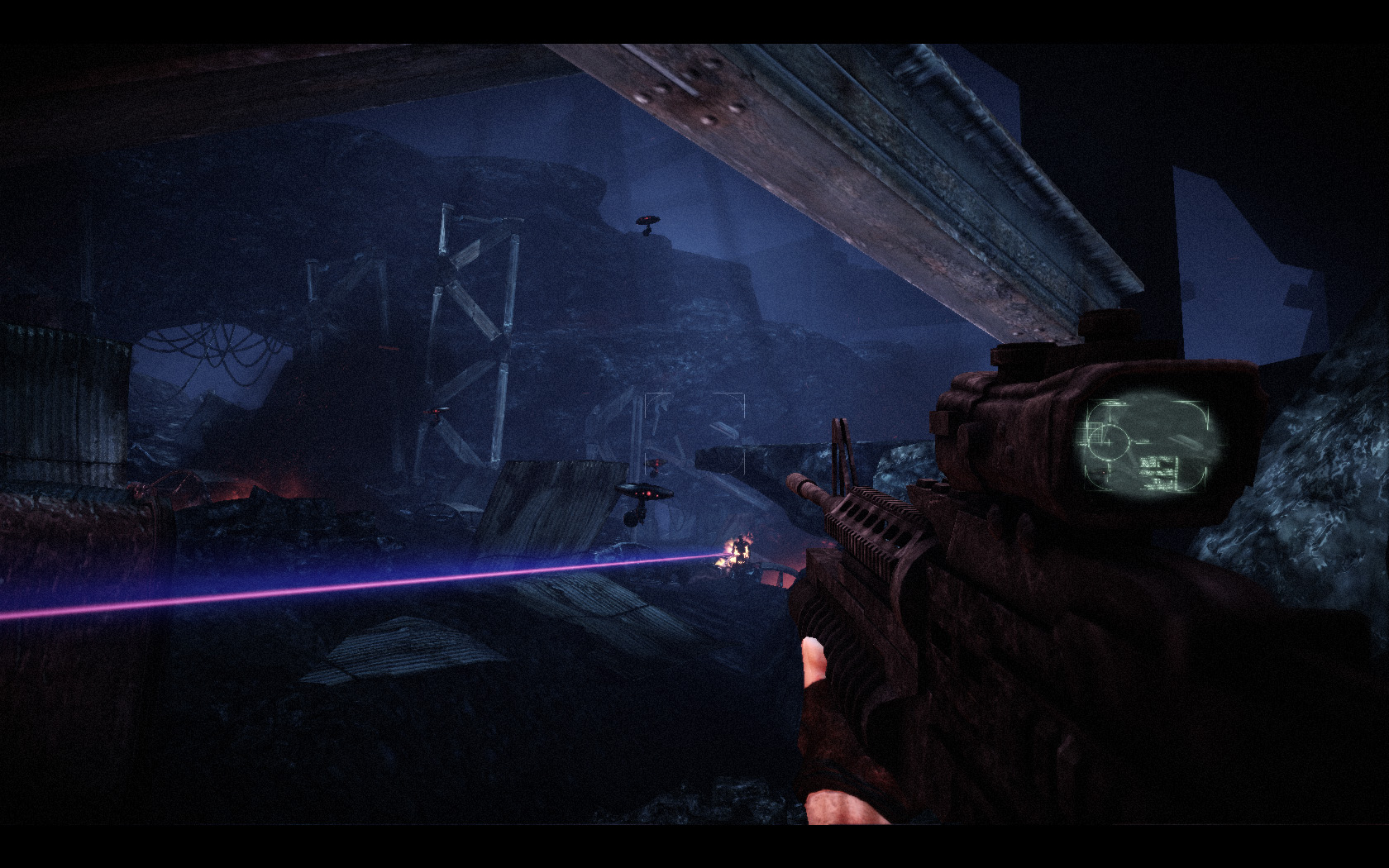 Screenshot of the player combating HK minis in a sinkhole.


Sinkhole Gameplay. this video has a better representation of the HK-minis in combat over the earlier video.

What's there still to do?:
I still have things that I want to get done by the end of the year. Production is a bit slow at the moment. but will speed up when I have more spare time from school work during the holiday break. Here is a brief list of things that I plan to check off by 2011

So that's all I have to say for this month. I once again thank you guys for the support. enjoy the rest of the year

Im waiting for this :)

J.S.F, we've already had this argument a good few weeks back and he's already changed the first gun (which I preferred but oh well).

Also if you want to give more feedback towards the mod you can always join the forum :)

I too am waiting for this :) but I have one criticism:

This game has already had enough of the whole 'That gun looks like the rifle from Killzone 2' comments. Now the comment itself has lost all meaning. Now if you didn't know about those threads, then I am just warning you about them. But if you know about them, then please stop with the whole thing. It is really getting old and the developer/s are doing the best they can.

From what I've seen of it, the current rifle looks a lot like the old British EM-2 rifle, which is awesome (if not, then don't tell me, I want to keep my fantasy of a futuristic EM-2 :P).

By the way, and I do apologise if this has been answered before and I've missed it, but how are the optimisations going? Is the game more playable of lower spec computers now?

I love how frantic the gameplay feels. It's really really cinematic.

Looks great - the progress has been pretty amazing. From the latest video, I'd still have bring up the same old gripe about the firing recoil. It's quiet honestly pretty horrible still. I know there's a certain level of realism you want to achieve, but you need to balance that better with making it easier for the player and more importantly, fun. If it's difficult to shoot, that's kind of an FPS fail.

I love the idea behind the mini HK's, but they seem rather hard to spot right now, aside from the incoming laser fire. I'd suggest increasing the emissive or bloom value of their red lights or something.

My only other gripe is with the explosion particles. They seem to lack depth in a strange way. It's like even when you're far away, the sparks are ginormous, like they're right next to you. I'm fully aware this is an alpha and WIP, but just dropping my 2c anyways.

Yeah that recoil is a bit intense, its almost pointless to use that gun if its that bad to be honest...

the recoil is not horrible it's just not your cup of tea. I know fun is more important than realism. Realism is a theme for this game, and realism can be fun, depending on the taste. Making aiming somewhat difficult, can be a different kind of fun. you know, a challenging fun. it seems people here define fun as easy gameplay rather than challenge. But I can agree that the hip fire is strangely more effective than the scope. and I believe that balance is more important than ease of play. I still find this comment very helpful and I thank you for offering your opinion. :)

The aiming and the huge amount of recoil really helps creating an athmosphere of mass destruction and insane action the game goes for, its just perfect, dont change it ;)

I'm just saying that when compared to any other FPS game that has a comparable weapon (say, the M4), your recoil is incredibly overdone. Have you by chance fired weapons in real life? Recoil is the force of the shell pressing back in the chamber from the powder ignition - it's an equal and opposite force of the round moving forward.

Recoil kicks straight back and tends to make your arm raise the weapon up, due to how your body absorbs the force. In FPS Terminator, your recoil swings wildly from side to side, which is kind of wrong. When firing rifles, my arms never move side to side like this. It's not that it's a "fun" challenge to fire in the game, it's simply aggravating and annoying at times.

I look forward to seeing any changes in the future.

It's not aggravating if you get good at it, just like any skill. I'm not having too much trouble hitting the hk mini's in the gameplay video. but not too little trouble to be effortless.

I have also fired several different types of firearms in real life and I can back up what jstubbles is saying. almost all rifles have the chamber and barrel lined up perfectly with where the stock meets your shoulder. This makes the kick push directly backward, the slight upward movement is than caused by your body absorbing the force. There is little to no sideways movement involved.

However, I also recognize that since this is a plasma weapon it would stand to reason that it does not function exactly like a modern projectile weapon.

I would personally suggest that you keep the side to side movement in your game (because it really does help with the frantic feel of the combat) the one thing that I would suggest changing is that scoping in is currently not as usefull as firing from the hip (in my opinion).

I agree that the hip fire is unrealistically more effective than the scope, and that's something I'm more concerned about. My solution is to make the hip fire not so accurate. I also want to put more color in the scope to see target through it just as easily as when firing from the hip.

The biggest problem I noticed with the scope was that I had a very difficult time seeing the enemy through it. The scope sorta seems to blur everything and there is alot of stuff that gets in the way of your view when you are using it.

By the way, That in-game render of the HK tank looks really impressive.

This is looking better and better every time it's updated. Really amazing job and I love the music in the sinkhole video. xD

Wow.. god damn this is looking better and better every month.

In Terminator : Future Shock there were enemies such as floating homing mines, and odd raptor-esque hunterkillers. Are any of the other classic enemies going to be in this game?
Terminator.wikia.com

It would be awesome if you could get a license from the studio that made Terminator so you can sell this :)

Great stuff as always, but in my opinion people would not compare the gun in the game to killzone if you used some of the guns from the film, here is a good example

The gun kyle uses in T1

Or the one the resistance uses in T2.

the weapon from the screens and vids on this article is the one from T2. but the barrel has been modified to look like an M4.

That killzone problem has been resolved months ago.

I f***ing s***ed in my pants when I first saw this, it's so brilliant I reckon use could probably sell this for $100 (I'm being serious).

Idk why everyone was all crazy about the old one. Especially with this new design. It's just that the old one was fine, but this one is so much more ACCURATE to the one in the movie :/

Plus the sight is awesome.

There is just no pleasing some people.

That HK is dripping with awesomesauce. Want.

I wrote a piece about this here. Already notified my subscribers about the game. Looking forward to it :)

Is anyone besides me wishing that a more traditional healthpack system would be implemented here, at least as an option?
Would you try some mechanic that makes you stand out from the crowd more? I mean, I feel like recharging health is getting old now, as are many of the features from CoD & Halo.