Today we bring you a render of the Marder III Ausf. M.

As some of you might have noticed there wasn't an official news update in quite some time. This was mostly due to a period of inactivity, a period which is now luckily over. We hope the wait wasn't that hard to bear!

Today we have a render of a new light tank destroyer for the western and eastern fronts: 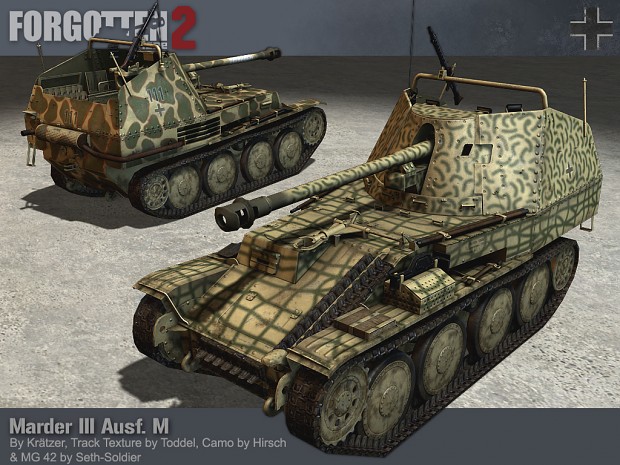 After the German 3.7cm and 5cm proved too weak to defeat more modern Soviet tanks it was decided to create a self-propelled tank destroyer to counter these threats. The result was the Marder (marten) series of tank destroyers, which served as a stop gap measure on all fronts, starting in 1942.

The Marder III version was based on the Panzer 38(t) chassis and mounted either a captured Russian 7.62 cm gun or the German 7.5cm Pak40. The Ausf. M used the Pak40 and was produced from November 1942 to May 1943. It was later replaced in its role by the Hetzer tank destroyer, which was also based on the Panzer 38(t) chassis. Surviving examples served until the end of the war.

The Marder IIIM was made by Kraetzer, Toddel and Hirsch and uses the MG42 model by Seth_Soldier. It is the fourth model of Marder available in FH2.

Our winners for this week's screenshot competition is Neo82. You can view the winning submission here.

We are now accepting entries for the week of December 3rd. If you think you have the best FH2 screenshot, post them href="http://fhpubforum.warumdarum.de/index.php?topic=16835.0">here.

great model for a great veichal.

Very nice indeed! Good job! I specially like the part where it says 'Eastern Front' :-D

Finally! Feared this mod was going under, looks like we'll have the Eastern Front update after all :D

FH2 Will Never Die!.
And i love marders :) Gonna be fun hiding this tank in the bushes looking for T34s to slay.

Are you going to add the Panzer 38(t) itself- the germans considered it to be a grest tank and it was widely used in the early war years and well into 1942. It would make a great counterpart for soviet light tanks!
And keep up the good work! Best mod ever!

Where in the world do they get the reference images to these vehicles? Its almost like some historian just gave the FH2 developers the building schematics to all of the vehicles of WW2.

The historical advisor of this mod has access to the tank museum Kublinka.