Thank you for subscribing to the NatSel media-packet network. The following article features a 95% match on your keywords "TSA," "Frontiersman," and "Kharaa." The distributor exceeds your credible-index threshold of 7.5. [..routed from Cassiopeia Node, your account has been charged..]

First Peek At the New Frontiersman!!

Our sources at TSA headquarters have leaked us these images and the accompanying brief for Frontiersmen field personnel. They are broadcasting it next week -- our readers see it first! As we understand it, this is only the beginning of a wave of new equipment and armaments, part of a major shift in the entire structure and focus of the TSA. We'll keep on that story, but for now, we give you: the New Frontiersman!

In these photos, we can see a shape and design similar to the current model -- but there are notable additions. Small armor plates have been added, while the torso is actually more narrow. The undersuit seems slimmer -- the release below refers to "Titanium Denim." We can only assume some kind of alloy-woven cloth. The different vantages reveal a whole host of technologies that remain unexplained. The spinal assembly ... nano-delivery for bio-enhancements? Or just variable support for extreme lifting and stress positions? The breast plate assembly is clearly housing something -- the light suggests network connection, but we'll just have to wait and see. 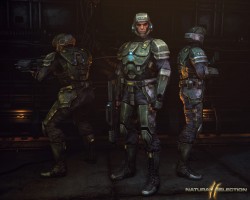 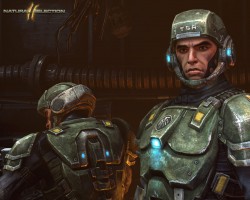 This close up shows the improved neck padding, and the clasp-and-strap system that allows all pieces to be donned, or removed, quickly. And note the helmet! Where is the visor, you ask? Those two blue lights tell the tale -- read on!

For the rest of the details, we now present the official Frontiersman release-packet, unedited. Some have accused the TSA public-relations department of being "irreverent" and "not professional" enough. We suggest those detractors suit up and fight the Kharaa themselves before criticizing. Save a few worlds from the alien infestation, and then get back to us.

This news packet is an all-points distribution to the Frontiersmen network. It affects all soldiers and field personal, and should be reviewed at your earliest opportunity. It is also rated for media and civilian distribution.

The TSA and Frontiersman Command are pleased to present to you the first in a wave of upgrades and enhancements to standard field gear.

Based on TSA infometrics, and already tested by brave men and women in the field, the new Frontiersman armor has been designed to operate at specs far and above the previous design.

These "specs" aren't just numbers -- each digit is stamped in the blood of those who have come before you. After years of fighting the Kharaa, we have far more data than we would ever want on how the aliens kill humans -- armed or defenseless. This has allowed us to fine tune the design, shaving away unneeded weight, reinforcing key regions, and adding protection to areas the Kharaa were bypassing entirely. These failings of the previous armor were to be expected -- they had been crafted with human opponents in mind, after all. The undersuit has also been changed from the heavy (and sweaty) "Double Khaki" material to a much lighter and more flexible Titanium Denim cloth that can respond to environmental conditions.

The result -- the new Frontiersman is better armored, and even more mobile than their predecessor. Like the old design, the new system is modular -- in fact, improved clasps and strapping considerably reduce the time to suit up, or remove pieces damaged beyond repair. In combat, reconstructive nanos can be routed to significantly damaged areas through the undersuit's nano-capillaries -- performing spot-repairs quickly and efficiently. Just as crucially -- this design has been optimized for construction. With only a few upgrades, most standard nano-factories can produce complete suits. Finally, and most impressively, the armor no longer chafes one's thighs and in freezing temperatures does not ... stick ... in places both embarrassing and painful.

The helmet redesign may be one of the more drastic changes. The HUD was formerly displayed on a solid visor -- which impaired vision, and could be broken. The new HUD strip is a holographic band of light generated from two simple-state projectors on either side. Compromising them would require total helmet failure. The information load displayed to the marine is also much reduced, in favor of more intuitive, distributed data.

The open-face design will be surprising to some, but represents a subtle yet vital shift in combat mentality. Ask any marine and they will tell you -- the best way to kill Kharaa is to know where they are. The aliens are deadly and sneaky -- but they are not the only ones with fierce instincts and sharp senses. The most potent detection gear a Frontiersman has is still his eyes and ears. The visor was a barrier between the soldier and his environment. When we removed it, we saw kill rates go up by 15%.

The new Frontiersman is more mobile, better protected, and more alert. We are not entering their world ... they are entering ours.

Media inquiries may be directed to TSA Public Relations. All other communications can be delivered by hitting "Comments" below.

awesome, i like the in-story style.. but i do wish at sometime you'd openly explain how it works in a game perspective. but i guess i can just dig around your site for that.

Wow great description of the suit design from the game world's perspective. Looking good as always!

Cool update. I'm liking their design, they remind me very vaguely of quake 4 armor and ODST, but so much better :D. Still looking nice and original this game, each update doesn't fail to impress.

-The whole face is exposed; cover the mouth and nose with a 'breathing apparatus' to improve oxygenation or something like that.
-If your character is alive long enough to use his mouth (eg. eating), he probably needs to grow some balls or... doesn't need the armour at all.
-The only real reason to expose the mouth is to show character's talking in cut scenes, I doubt this game has many of those.

-'Most needed senses are the sight and hearing', yet the ears are covered this totally contradicts 'having the eye's exposed' argument.

-Titanium Denim??? The scientists can make clothes out of metal? That not physical possible! yet for some reason they can't make a simple device that helps the troops see better?