I've been finishing up the first draft of a MAXScript to export model data into our custom format. I decided to go with an XML based format so that I could re-use a lot of the code that was already in the Framework.

I've been finishing up the first draft of a MAXScript to export model data into our custom format. I decided to go with an XML based format so that I could re-use a lot of the code that was already in the Framework. This also allowed me to export a lot more out of the scenes than just mesh data. The final version will allow us to export skeletons, animation information, lighting, as well as "dummy" objects that we can use for miscellaneous things in the game code. The details of the file format as well as the MAXScript will be made available to modders once we get some more development finished and things are less likely to change dramatically.

Here's a sample using a free model I found on TurboSquid just to throw something a bit more complicated at it to make sure it worked. This was also a good test of the initial camera angles that I set up. From the bottom shot you can tell that we'll probably have to move the camera out a bit more in order for the player to have enough information to play the game effectively. 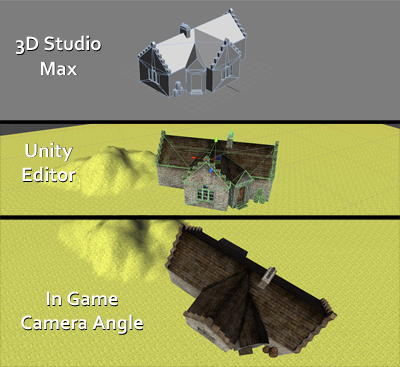 I'm anxious to get these tool related items checked off my list and get to work on more implementing more of the game's mechanics. However, that will have to wait for a bit. As you may have noticed- Todd, Ryan, and myself have (usually) been posting every third week. We wanted to use this format to give all of you a well-rounded look at our development process while also giving us some breathing room to get things done. We try and have our posts up on Friday or Saturday. My next Friday/Saturday is October 19/20. You won't see a post from me on that week because I'm getting married. (Yay!) You also won't see any posts from me for the subsequent two weeks after that since I'll be on my honeymoon which contains, among other things, a brief stop in the city of my namesake. So if you live in Scotland or Ireland (I'll be there too) feel free to find me and buy me and my new wife a drink! Until then, Ryan and Todd will hold down the fort.

As a final note - we have official social media channels for Fractured State now! Please continue to show us your love by following us on these sites!

That's interesting, you can make Unity recognize custom formats? I did not know this. Also, congratulations on the happy news! Have a good honeymoon. :)

Yeah - the best thing about Unity in my mind is that you get access to almost all of the .NET(Mono) framework as well. Without it, we wouldn't be able to implement any of the modding features we have. We've essentially thrown out Unity's entire workflow and are building our own from scratch.

Cool! I may have to look into that then. :) Thanks for bringing it to my attention. Are you guys using Unity Pro or Free?

Free. The plan is to do some Alpha Funding to get a Pro license. Among other things. Hopefully the cool folks here can help that happen! :)