For what I'm sure will be the shortest ALPHA ever, Rick has tapped out the last of the Main Quest scripts and we are moving on to the last phase of development. Come look at pictures.

WE'RE IN OUR ALPHA PHASE NOW!

Aw yeah! So what's left of our Main Quest as of right now is landing some Vertibirds, 1 of 5 NPC Faction Leaders disembark, they greet the player after they make their final choice at the end of our final boss fight, say goodbye to a fr-enemy, and off you go into the sunset. Our Ending Video plays, 1 of 11, and that is that, the mod is done. 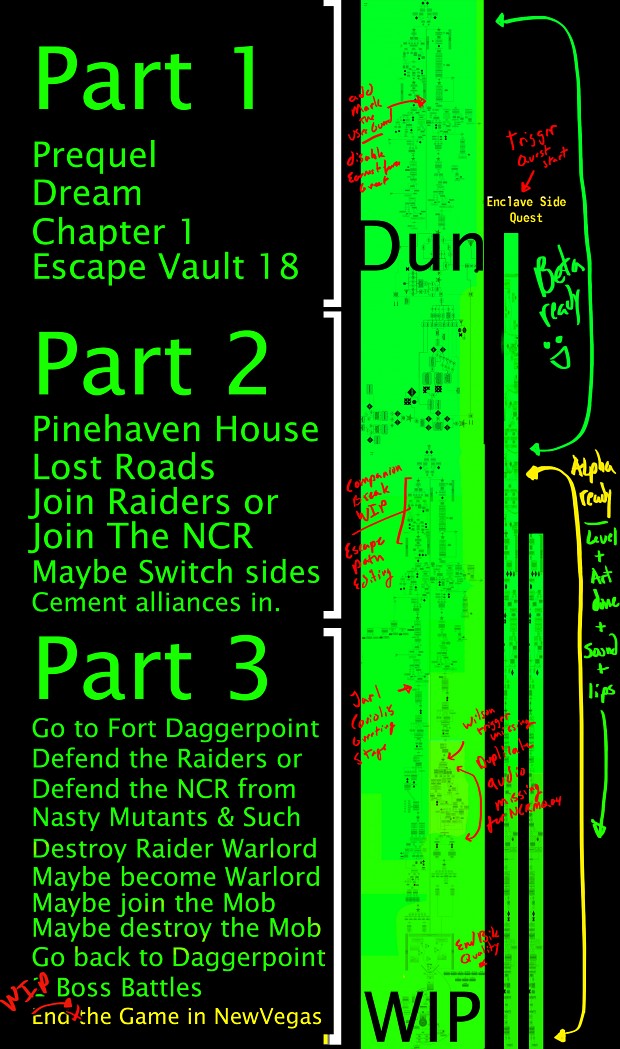 We'll then swing back to the beginning, where we have a not-insignificant list of things to do:

THIS IS WHERE MORE TEAM MATES WOULD BE NICE! :p

Developing a mod with just 2 principal members means that the lead devs are also the janitors. We have to make our own fixes and revisions, so, if you wanted to ask for a "release date when?"

We need to add the Enclave Player Path to the entire mod now, which isn't hard, just a matter of timing the greetings and radio calls you get at each major quest objective. We need the player to get the call where they can reasonably get to a private place and report on their progress to the Colonel.

It's The REST of the mod after Pinehaven and Lost Roads that is going to need the most TLC. That has not enjoyed the benefit of 5 years of playtesting and refinement. That's the "new" part of the mod that almost no one has played outside of a few people who are working on the mod.

Our goal during ALPHA is to just get it all playable. That's priority 1.

For that end, we need to go back and make the most adjustments to the raider path, I think. MQ01 has some mildly wonky elements.

Speaking of new Raiders - we have New Raider Armour from Dragbody! :D

So that taps out the Raider notes we need to address there. The NCR MQ01, just like Raider MQ02, needs a Nerd option to solve the combat problem at I-15. I'm thinking maybe the NCR have a "Static Robot with a Canon" the player can hack and repair, and it launches a Fat Man barrage against the bunker, solving their problem. I can set a pair of BOOMERS artillery pieces on its shoulders, and a terminal on its backside. They fire and boom. Problem solved.

I'll stop here for now, since past MQ04 we get spoilers. :D But there are just enough issues in MQ04 and we haven't even playtested 05, because we just now finished it! XD

BUT, once these issues turn GREEN, we are in BETA, and a Public BETA will be right around the corner!

We have yet to put a time estimate one this list. But after this list is done we can release that information and gear up for Public BETA 200. 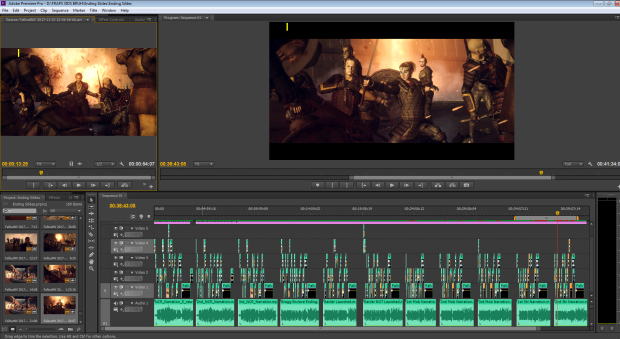 I spent the last 26 straight days working on our ending videos for about 6-8 hours every day, at least. Usually in the evening around other obligations. And they are fan-fucking-tastic. They really rewards player for getting to the end, and with 11 unique ending, all of which are part of 5 unique branches in the plot that are quite unique to each other, they are a great treat to see after all that replaying.

They all start roughly the same, and end the same, and share elements here and there, but they are all radically different stories.

Here is a selection of the different environment TrickyVein, Jack, and I put together over the last month. 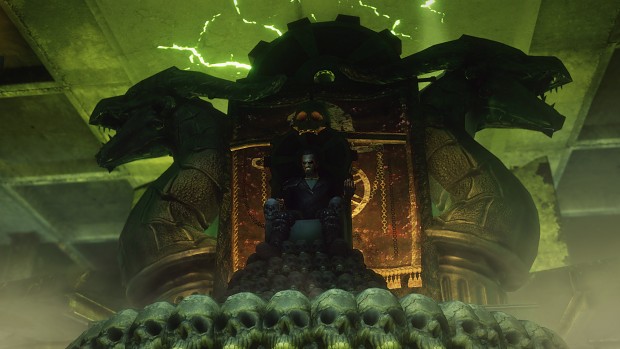 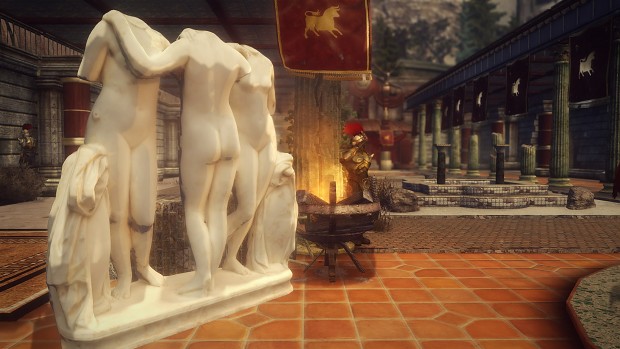 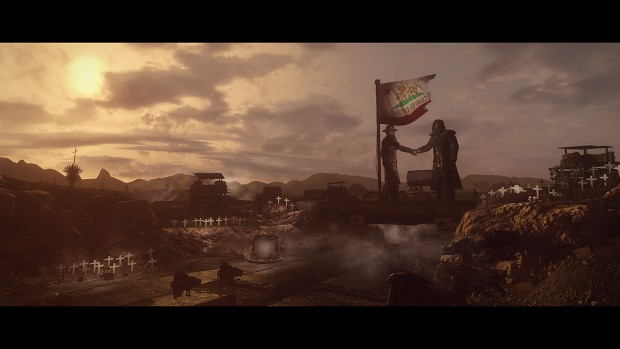 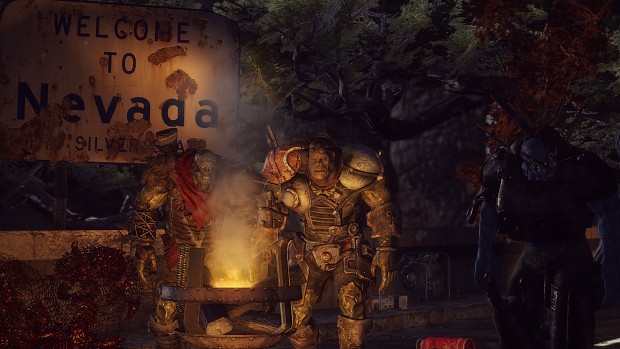 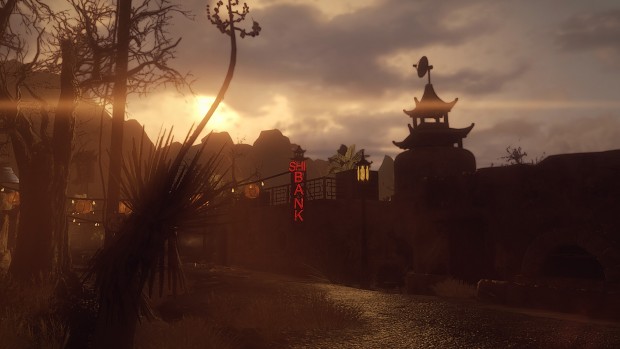 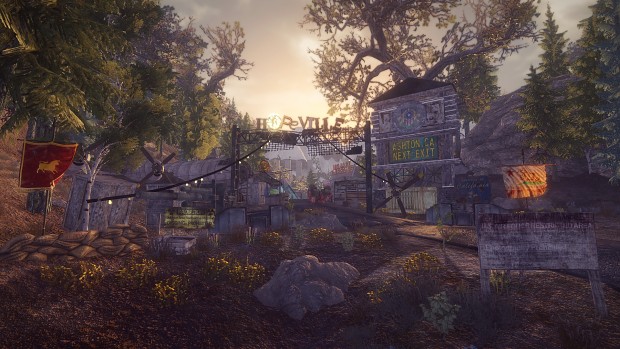 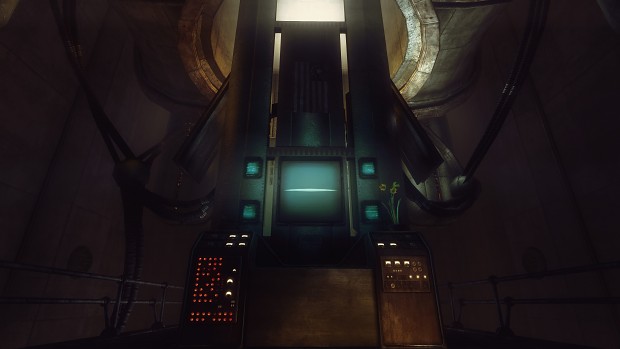 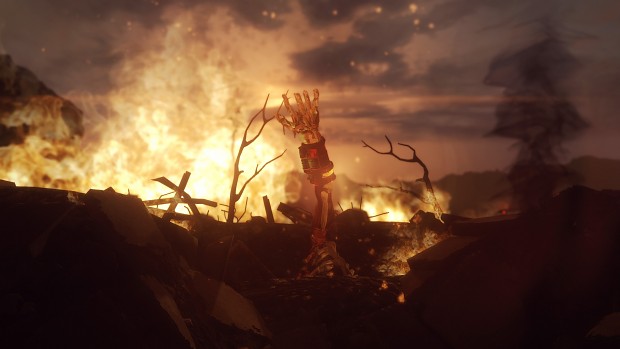 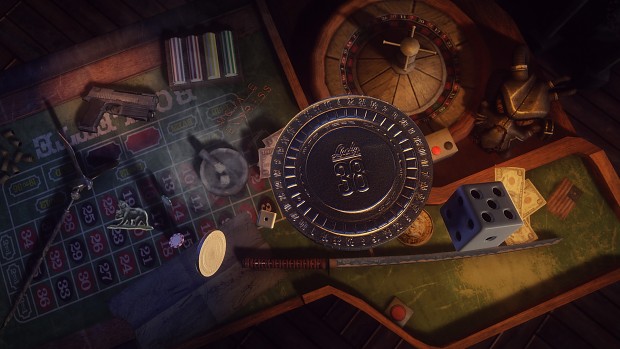 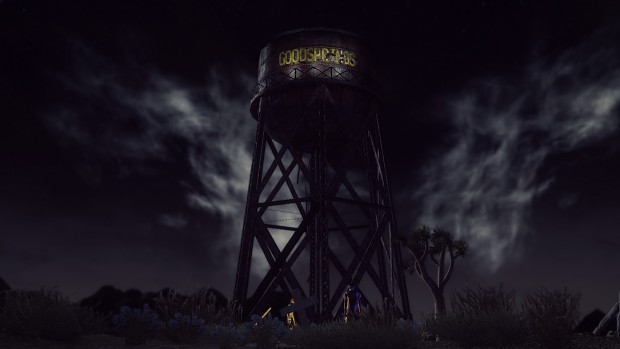 And that's just to scratch the surface. :D

How all of this fits together I'll leave up to your wild speculation! But soon, you will speculate no more, as you can just play the damn thing. :D

Man, each update gets sexier :D look at those pics, just wow.
11 Unique endings ? Bethesda should sell the franchise to you asap.

Bethesda should give the franchise for free to people like this, so they can make Fallout great again.

Cannot wait the environments and cities look epic do you think wasteland defense would work with it?

WE have a lot of big open spaces, so it absolutely would.

Most of the images on this update are just for the ending narration slides, but our game world has a lot of fun stuff to explore too. Just no real urban areas, mostly open desert wasteland.

This makes me hard.

Because they are hidden.

So, i can actually just go through vault 18 and mess everyone up by shooting/bruising/killing em as if i was a murderous psycho? That's the idea i got from reading through this! :P
I'm expecting something linear that is that bit dependent on my decisions, but it would be nice if you could mess everyone up somehow and play like you do in NV.

I'm not sure where people get this idea that everyone is killable in NV. :p You try that and the game breaks really fast. Our mod will be similar. Can you kill everything you meet? Yeah. But if you do it at the wrong time it will break quests and lead to a dead end, just because accounting for that specific variable took too much effort by that point in the story. But if you wait and play your cards right, everyone is killable, especially if you go Enclave til the end.

We had a 12th ending for a player that kills absolutely everyone they meet and breaks their game. But so far we've not implemented it. Been too busy with the actual main quest.

For some reason, i did not encounter mandrake at all until after i killed the bad guy, then he was in the main room of the cave, wiping out all of the voiceless, and I am totally stuck without a way to get past or kill him....