The first of the three major playable factions in the mod is the Imperial Remnant. Its history, playstyle and unit list are broken down in this news post.

"One Empire, one fleet-- only this will guarantee us victory."
- Natasi Daala

Without the forceful presence of the Emperor, the Galactic Empire could not survive. After the death of Emperor Palpatine at Endor, the Galactic Empire split into several distinct factions run by individual warlords, admirals, Moffs and other prominent Imperial figures who are all vying for control of the former Empire. There were often dominant figures such as Ysanne Isard, Grand Admiral Thrawn, and then the reborn Emperor himself who managed to unite large sections of the former Empire to try to re-establish its dominance in the galaxy. After the final death of the Emperor at Byss, Admiral Natasi Daala convened a meeting of the most powerful Warlords at Tsoss Beacon in the deep core and killed them all, uniting the remnants of the Empire under her rule until she passed off leadership to Gilad Pellaeon in 12 ABY, dubbed "the old man of the Empire" for his long service. He curbed some of the Empire's more repressive policies and would continue to lead the Imperial Remnant for the next 29 years. Most notably, he led through the signature of the Pellaeon-Gavrisom treaty with the New Republic and the Yuuzhan Vong War, where he negotiated the entrance of the Imperial Remnant into the Galactic Alliance to repel the extragalactic invaders. 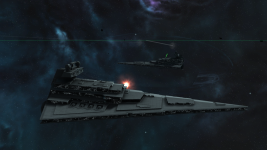 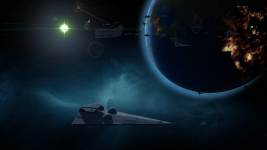 Before we get into the actual faction, we want to say a few things about how we go about developing them. The emphasis in developing the playable factions in Ascendancy has been on trying to make sure each faction has its own distinct playstyle. The base Sins had some success in this respect, but it was more in the way of one or two interesting unique techs per faction which were ultimately frustrating to play against and often involved little direct interaction with the player (for example, the TEC's insurrection tech). With regard to research in particular, we have shifted away from having each faction with the same 5/10/15% bonus to stat x types of research options, instead emphasizing the core aspects and ideologies of our factions and trying to bring them into the playstyle, along with providing some development along the lines of canonical events in Star Wars history. This means that not every tech will be a straight bonus; some techs will provide a buff to one facet, while reducing its effectiveness in another area. Research is no longer in a "research ALL the things" way, there will instead be some choices the player has to make on what they want to emphasize. 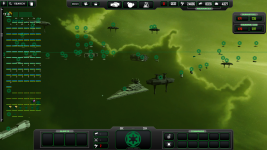 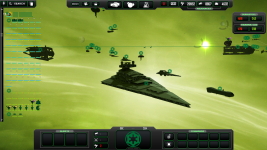 The Empire relies more on oppression and propoganda to keep its worlds in check, and as such its cultural and economic policies focus on preventing the spread of enemy culture and maintaining a strong hold on its own systems, as opposed to spreading its own culture. One of its most effective ways to spread and maintain its own culture and reduce enemy culture is to use its Star Destroyers to attack enemy systems or to maintain a military presence in that system, increasing their fear of reprisals by the Empire. It also has the means to convert some of its population into production through forced labour. As the game progresses, Imperial players will gain access to more liberal tech options in line with Pellaeon's leadership style, which, if researched, will sacrifice some of its bonuses for better relations with the other factions and the ability to spread its own culture without the need for violence.

"What the Empire would have done was build a super-colossal Yuuzhan Vong–killing battle machine."
-Han Solo

Militarily, while in the early game the Remnant's vessels can usually stand up to enemy vessels on their own, their ships lag behind the later game ships of the other factions. The Empire instead focuses on building larger fleets focused on supporting one or two superships. Many parts of their tech aim at allowing a strength-in-numbers approach, letting them field larger numbers of slightly worse vessels faster than the other factions. However, unlike in other fleets, this gives the Imperial fleet an obvious target for its enemies to focus on. 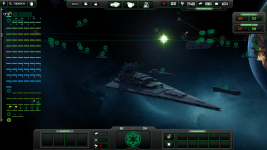 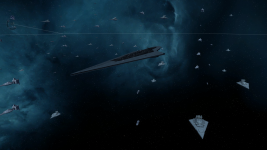 One question:Since the original Thrawn's Revenge mod did have a Reborn Emperor's faction,will this mod have him and the Eclipse ?

not the eclipse, but the Sovereign

The Eclipse was a specific flagship for one individual; because of how Sins does mirror matches, we opted for the Sovereign so there's no huge indicators to say the Remnant group is necessarily one leader's version versus the other. The Sovereign and Eclipse play more or less the same role, in any case.

To quote Corey from the forums:

"The Tector was considered, and was planned for for a long time but ultimately I decided to axe it. There's nothing inherently wrong with the Tector but the power difference between an ISDII and a Tector isn't really big enough to justify using 3 capital ship slots for such a similar range (ISDI-Tector), and there are some readability issues ingame if you're trying to micromanage. Kind of hard to know at a glance what's a Tector and what's an ISD."

The Allegiance has been added to the list for a reason. ;)

Dayum. I love me some ISDs.

What is the max amount of capital ships we can have?

We haven't decided yet, that element will be figured out when we have a more complete mod and can determine the balancing with better accuracy.

just wondering if you could enlighten me on the role of world devastators in this mod. I mean I could see them churning out frigates and stealing resources.

Pretty much this. World Devestators will probably be the seige capital ships. Blow and capture planets fast while gaining resource bonuses from doing so.

I love that idea; WD's crushing your planet for resources, but also churning out fighters and light frigates at the same time. You could make an ability similar to the Advent's "drone swarm" and the Vasari's "replicate forces".

The exact functions will be explained as we go.

That's not true at all. Look up any New Republic ship designed after Endor, and almost all of them can beat their Imperial counterparts. By 5ABY the ISD was like two and a half decades old, and the NR's ships were designed specifically to beat them. The MC80B could beat an ISDI and was only moderately worse than an ISDII, but then you get to 19ABY and you have all of the New Class Project ships which could destroy Imperials 1 on 1... It's hard to have a tech advantage when you your newest ships were developed before the opposing faction even came into existance. The last time Imperials had superior capital ships was when they only had to deal with MC80s.

um what about all the super cruisers and then you have Pellaleon Sds and other designs or am I too far in the future with that one?>

also I always decimated the rebels with imps the tector was adept at gunfighting and the isd2 even knocked out the mc90 in game I realize but ehh I believe the nebula is where they started the superiority, or vessels around that I think....

That was more of a balancing decision if anything. In reality the MC90 would destroy an ISDII or Tector.

Well then but I still don't beleive the star dreadnaughts and others would lose out just due to sheer firepower and shields...

That's all the Imperials had going for them in terms of superior capitals after the New Republic ships started rolling out, were just the large SSDs. Even then the NR rolled out Viscount Class Star Defender to counter them.

Hmm true true but they had such variety and when Pellaleon took over they turned around soo? idk maybe I'm just a Imp lover lol.

Even under Pellaeon the Imperial Remnant struggled: by 19ABY they were down to one major shipyard that couldn't even keep up with demand for new capital ships (which were predominately still those same 20-30 year old designs).

granted but in the sins game if you want to make it to where certain planets are only able to build capitol ships they would have to make a planet type and make their own maps to ensure it says true to cannon. so getting the game to follow the cannon will be a issue. the only way i actually see them getting the game to follow cannon would be make the cap yards make your caps build super slowly. even then theres an option before you start the game which would enable you to speed up ship building.