We've introduced locational damage for our vehicles, which will make tank combat more interesting and dynamic. We've also got some new destruction animations for the latest buildings. Plus some infantry teaser news!

Instead of me posting an update for APB the past couple of weekends, we had TruYuri and ChopBam both give you some pretty informative blogs on what we've been looking into, and I ended up doing a recap of the TSR release last week. If you haven't read them, take a look, there's good stuff there.

We've been talking about some rather ambitious plans to overhaul infantry and tank combat for A Path Beyond, which have actually been coming together quite well. I've alluded to being able to hide better with infantry, and ambush passing tanks. I'd like to explain how some of that works, now. A recent change Saberhawk made exposed tanks to the existing damage scaling subsystem, and a proof of concept was made shortly after. We then posted the following video to our ModDB and YouTube pages:

In the above example video, the Heavy Tank is set up to need just over four shots to destroy it. However, the tank has specific weak points. These numbers aren't final and are just there to illustrate the concept, and we're going to be conducting testing to find the right balance to reward ambushes and superior maneuvering/positioning -- without making tank battles end before they can really begin. The areas that take damage on the Heavy Tank are pretty well defined, however, and are about the same for Medium Tanks as well. 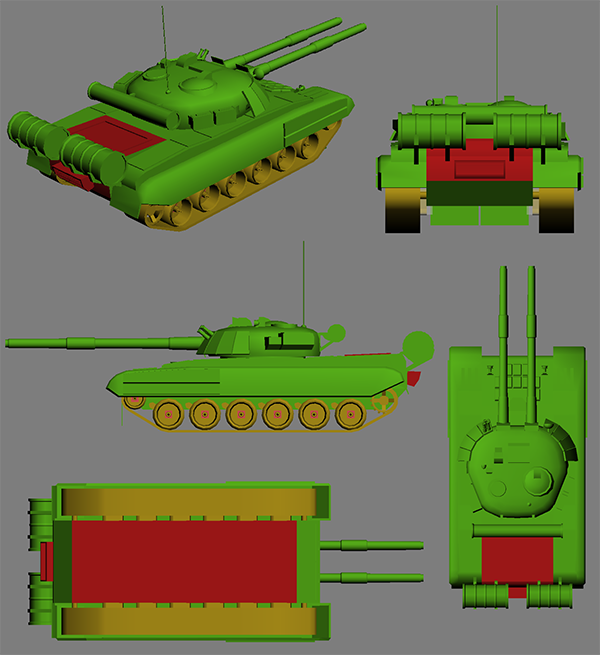 For the demonstration, the damage settings were as follows:

The fuel barrels on the back themselves do not have any damage bonus, and actually partially obscure the main weakpoint of the tank. Splash damage is basically unaffected by this, so it does not matter whether your tank has its front or back facing a V2 explosion. This also means that you cannot simply multiply the damage a tank takes from a head-on shot by 3x to find the damage that would be dealt to its back, because some portion of the damage the front took was from splash damage; it will be a little bit less than 3x, therefore, in practice.
Last blog, we showed off the new helicopter refill pads. Bases will often have extra service depots and helicopter refill stations, to help you get ready for your next attack faster instead of spending time waiting in line. Cuddling, who's totally back now and it's awesome to have him around, has also made destruction animations for these. Have a look, they come complete with Cuddling's usual taste in music:

Keep in mind there will be sparks, fire, smoke, sounds, and the works when you see them in-game.So that's news on tanks and buildings, but we've also got some exciting changes that were successfully tested for the infantry aspect of the game. I won't go into it all right now, but hints are fun! If anybody was hoping for snipers to return, there is now a chance for a marksman sort of unit if it fits into the balance scheme well, although the days of "kiting" other soldiers while banging off easy headshots will remain a thing of the past. If anybody was hoping for an end to bunnyhopping as the dominant strategy, you're going to be pleasantly surprised at what we're testing. We'll have more on soldiers next week.

Dislikes for having an opinion? ModDB in a nutshell.

This is typically how agree vs disagree systems work. These votes are for a critical standpoint. If "C&C shouldn't have hitboxes" had garnered significant support, the devs would be encouraged to look at it and possibly reevaluate the decision.

I for one think it's a move in the right direction as tank battles will no longer consist solely of two tanks revving back and forth constantly in a futile attempt to not get hit. There's more /strategy/ to a game derived from a strategy franchise. Now I just wish there was something done with infantry so they weren't just bunnyhopping healthbars with different flavored guns.

People who love to bunnyhop are going to be very, very disappointed and will probably slam the "disagree" button hard when they see next week's update :)

It's OK for people to agree/disagree, but unfortunately the ModDB system hides posts by default if they are disagreed with enough. Since not everybody wants to make a post to say they agree/disagree they just use the +/- buttons.

It's not a "dislike"

It's just how these things work.

this makes it more interesting

Destroying a Heavy in two hits...

Looks nice. Should be interesting to see how quickly I can down those Reddies now.

Yes, quite refreshing that light tanks now stand a better chance when going head to head.

Although, I don't know if two hits is that great, I think the fire rate doesn't allow the tank the opportunity to turn away in time.

I think the firing rate might come down a little more for Medium/Heavy tanks compared to what you see in the video. It is pretty important to let people retaliate when attacked, after all. Don't worry about the numbers given in this update, they're just to illustrate the system. We're working with the testers to get a good balance on it right now.

damn i have to play this sometime again :D used to play it few years ago -_- nice news!

What's the point in the green if its not going to shave off at least 10% from full damage? Doesn't this just mean that all weapon damage has to be toned down to accommodate such wild percentages? Or are all the vehicles made out of aluminium?

I always imagined the vehicles in red alert being made of putty.

i liked the weakspots they did in Star Wars battlefront 2 they were usually in hard locations often making them trickshots and hard for other vehicles to exploit, gave a good fighter with a missile a chance though