Hey guys, The Europe in Ruins team has released a new patch! This patch has some new game content and allows for Steam compatibility. Download the mod here or at www.Europeinruins.com

Hey guys,
The Europe in Ruins team has released a new patch! This patch has some new game content and allows for Steam compatibility.
For those new players who need to install a new version of the mod, the mod must now be installed into your steam directory.

Our current installer does not automatically put the auto updater into your steam version of COH and this must be done manually.

Just install the auto updater into your steam folder COH, which should look like this:
C:\programfiles\steam\steamapps\common\companyofheroesRelaunch
When you put the autoupdater here, it will work and automatically download the mod to your steam COH.

All Europe In Ruins games will be launched from the launcher that is installed along with the mod.

Following these steps above will keep the installer from calling you ugly names. (our coder has a sense of humor)

Thanks and stay tune for our future PR release where the EIRR team will be showcasing our new war card system and fully working warmap. 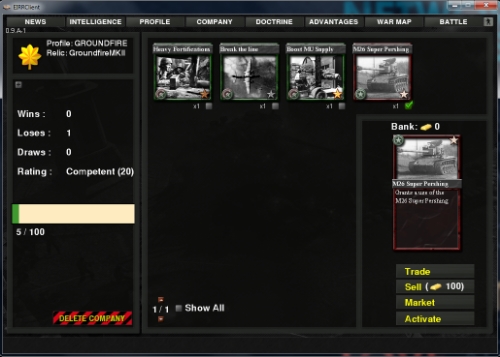 Such as shame that this game is completely centered around a few guys making the only "valid" feedback, and that exploits is considered part of the gameplay -_- love the concept

Could you please elaborate? There are strong units and builds in every RTS. Considering that we are making completely new content it takes a bit to weed out the overpowered stuff, but there are not any "Exploits" that do not already exist in normal COH.

Why not fixing the exploits that did already exist in the normal coh then?

That was one of the reasons I stopped played seeing some light armored vehicles killing heavy stuff and cycling around numerous squads of at infantry and other at units ruined the fun. While coh was never much into realism compared to games like men of war which also lacks in that resort it was still x5 better than coh.

Never the less it's fantastic to see that you folks are still so dedicated in improving your mod. It's most likely one of the best coh mods that ever existed and I wish your mod only the best I may give it another try soon. Back in the good old days I used to play your mod a lot and I did enjoy it very much. Download it people.

Well, we've actually fixed numerous exploits. One which comes to mind being the "Semi-auto ATG" exploit. Which is why I asked him to elaborate.

Exploits we want to know about and will correct. Balance issues are however very subjective and we take careful consideration on each subject before digging into the unit itself.

Is there a problem here? Does it need to be fixed? Is this an isolated problem? We don't really want to change something because someone had a bad day, if you know what i'm saying.

I thank you for your kind words and thanks for the feedback. :)

whenever I try to run the auto updater it says " Auto Updater Installed to the wrong location please reinstall to your Company of Heroes Directory" I have the steam version so I installed to my steam folder location, can anyone help me because without updating it, it wont allow me to play the mod