Today we provide an official insight into Enderal´s ingame music. Our composers Marvin Kopp and Simon Autenrieth, who has contributed largely to the Nehrim soundtrack, prepared new pieces of music for you. Enjoy listening!

Today we provide an official insight into Enderal´s ingame music. Our composers Marvin Kopp and Simon Autenrieth, who has contributed largely to the Nehrim soundtrack, prepared new pieces of music for you. Enjoy listening!


Empire by the Sea, Sacred Roads, Sacred Roads Fight, Home of the Blessed, Traveller's Path, Ocean of Sand, Blood and Iron, In the Sunlight

Only seven strokes of a quill – yet is there another word that countless tyrants just as rebels have raised as a banner for their bloodthirstiness?

You speak of an inner change that you – that we, the Order, have gone through; a higher goal that we pursue and a graver threat that must be fended off. But I ask myself – what is it that you really want?

For generations I have ruled over this land, at Malphas’ side. I have witnessed wars raging on Nehrim and Qyra, I have seen power-hungry men and women craving more and more while their soldiers, submissive and fanatical, ran into the next rain of arrows for hollow words.

I have grown old, Tealor, and I would never claim that my hands are free of blood. Indeed, during the many years of my rule, I had to make decisions that even now haunt me deep into the night. Yet everything that I did in the name of the Order, I did to maintain the greatest good: stability – and with it, peace.

I do not know how many of the words that the priests proclaim every third moon are indeed the result of Malphas’ own reflections, and which words are merely spoken to preserve the people from spiritual chaos. But even now, looking upon the dark alleys of the Lower Town, I feel that my way – our way – was not wrong. For the Enderalians are happy. They believe in the Path that gives meaning to their lives, they believe in rebirth after a path-following life. And even we, who have understood how to utilize nature’s secrets for ourselves, do not know the answers to all questions. Even we can only calculate with probabilities and hope to be right.

To answer the question that you have asked in your letter: Yes, I am convinced that it was the right decision to withhold the news of the events on Nehrim. I do not dare to imagine what kind of chaos the loss of everything that one believed in can unleash.

More than two months have passed since our last update. The development is going well, even though the Creation Engine turns out to be quite a challenge, especially when in terms of implementing quests. But nonetheless, we're making noticeable progress - Parts of the new gameplay elements have been integrated, and we'll present them as soon as they're ready to be shown.

As it can hopefully be seen in the above letter from the character Natara Dal'Veram to Tealor Arantheal, we're investing a lot of time into writing a multi-faceted, elaborated lore. There won't be only new creatures and factions - Due to its remote position in Vyn, Enderal will have an entirely new culture, with its own ways of thought, myths, legends and problems.

We also decided to rework the Lightborn Malphas visually and mentally. How might an empire, which was reigned by a Lightborn for thousands of years, have looked like? What did the people believe in, and what had to be done to maintain stability and peace?

The answers to those questions lie all in the world of Enderal! 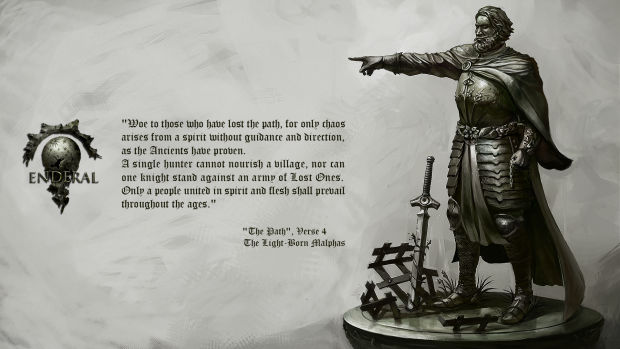 oh yeah. this is gonna be legit

Music really reminds me of Secret of Mana. Love it.