Catapults were in Empires in Ruins since the far away days of our first official demo, that means almost two years ago. But at that time, they were static sprites, with no animation whatsoever....

Catapults were in Empires in Ruins since the far away days of our first official demo, that means almost two years ago. But at that time, they were static sprites, with no animation whatsoever, positioned on top of a tower. The scale was off, was at least we had a placeholder, and it stood there, static and waiting till today. 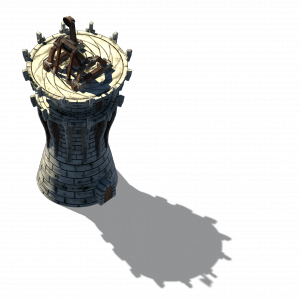 Now, after the remaking of all the archery towers models, the time had come to reboot the artilleries as well. We drew a new artillery development tree (long story short, catapult, ballista, repeating ballista, cannon, bombard) and started sketching the towers themselves. The first idea was of having a sort of bunker, surrounded by a ditch, with the machines on top. Awesome idea, beautiful models, but looked absolutely weird on map. Due to the fake simil-perspective used in EiR, the model looked very bad next to the towers, and moreover the turquoise top (color of the player's army) gave it the look of a birthday cake. 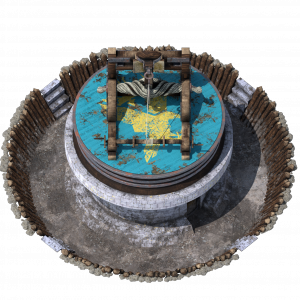 2) New version of the Catapult tower, with rotating platform

We then started an experimental process of iterations over iterations in order to figure out the best way to present them to the map. The first attempts were catastrophic, till the third of the ones presented below appeared. It still had some issues, but it looked much better than all the other ones. Time to elaborate on that same direction. 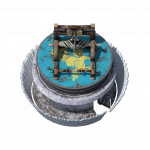 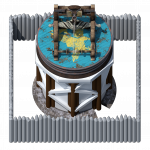 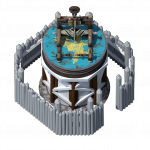 Less fancy colors, with the player's colors replaced by a side banner, more wood to stick more easily to the rough look of the game buildings, and still the use of a separate rotating platform on top of the tower. And at that point is where George's work ended, and our programmer's, Emiliano, one began. 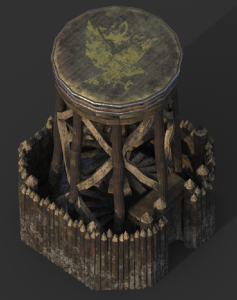 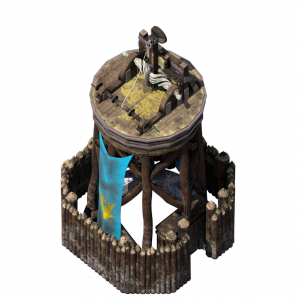 We built up 9 spritesheets for the catapult. One for each of the main 8 direction, to be split into Reload and Shoot, and one containing a discretized version of the 360 degrees rotation. We wanted our catapult to lock on a target, rotate till aimed, shoot and then reload. Slow but with large and heavy area damage is the basic idea behind this tower. One of these days, when we are less under pressure with assets production, we will probably post the code for the catapult engine, for now let us just say it was a two days of hardcore coding, but in the end it worked, damn if it worked!

And once all the minor glitches were fixed as well, they did undergo some heavy stress testing, that they passed very well. So here we are, and the first artillery tower is now in game. Production already moved to the ballistas and cannons, that means we are gonna have them ready soon!

Thanks Angel! We are crunching of getting a new demo ready, will let you know for sure when it is! (as you see, it is taking quite some time, but we are adding quite some things ;) )

I guess I will have to wait abit more ;p

I bet I wont be disapointed :)