Empires 2.4 patch has been released, as development has been started up fully again. Now with an improved user interface, updated models and maps, entirely new maps, additional gameplay elements and much much more!

Empires 2.4 has been released!

After a long period of development, Empires has finally been patched with a whole host of new additions. A conversion to an improved Steam delivery system will now allow us to patch much more frequently, making development of the game much easier from this point onwards. Released for 2013, we're looking forward to a great year of progressing this Award Winning Mod even further, showing how unique the RTS/FPS Hybrid genre really is.

In other news, our main website has been revamped, and is currently undergoing improvements. Head over there now to see how it's progressing. It's also worth mentioning that since Team Fortress 2 became Free to Play, Empires is actually free for everyone, with no prior source games required!

A battle with the new Brenodi Heavy Tank, taking place on the revamped version of the map: "Money" 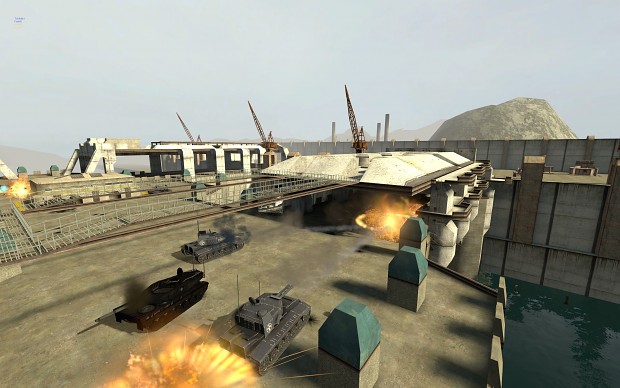 Brenodi APCs engaging the fortification on the new map "Bush". 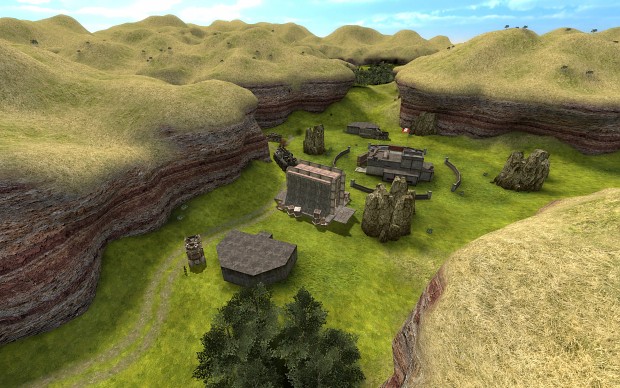 The updated interface as visible from Commander mode, showing combat on the updated version of "Crossroads". 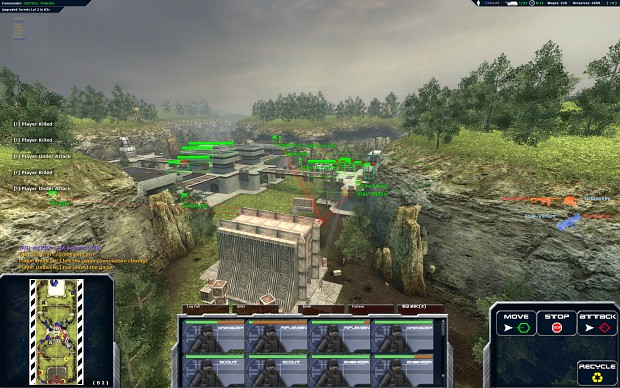 Fighting over the centre flag on the new Conquest map, "Eastborough". 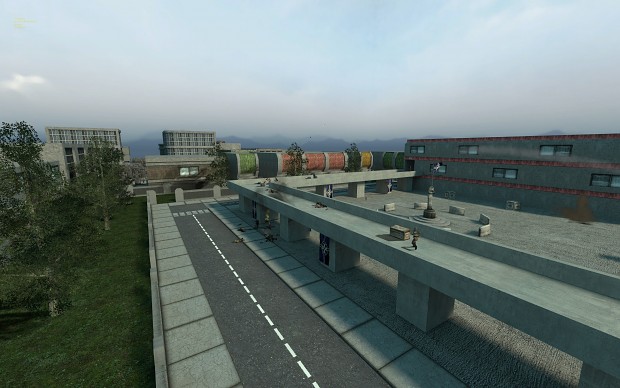 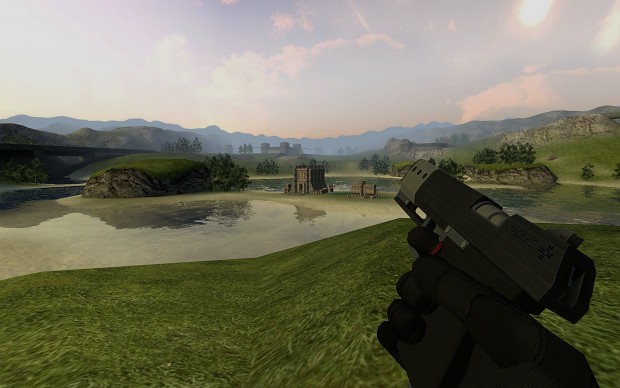 Contesting the beachfront on the new map, "Palmbay". 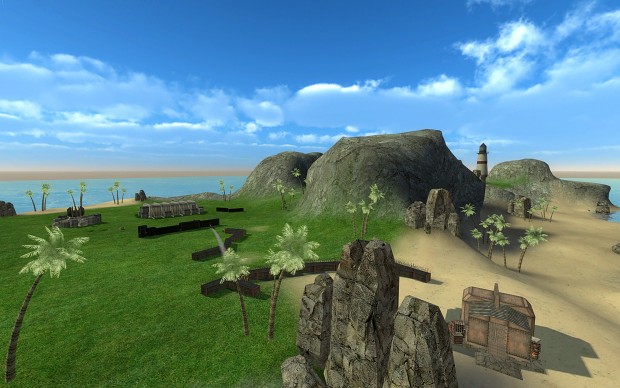 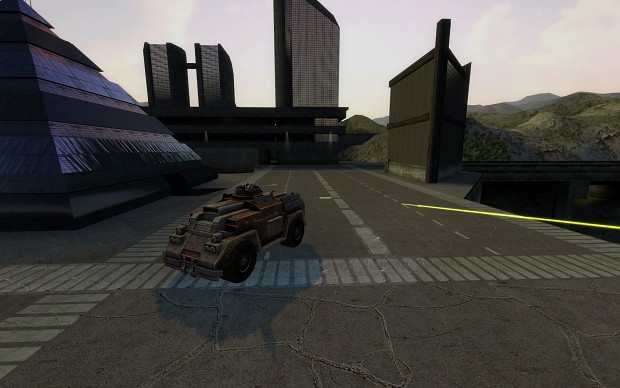 Pushing the high road on "Midbridge". 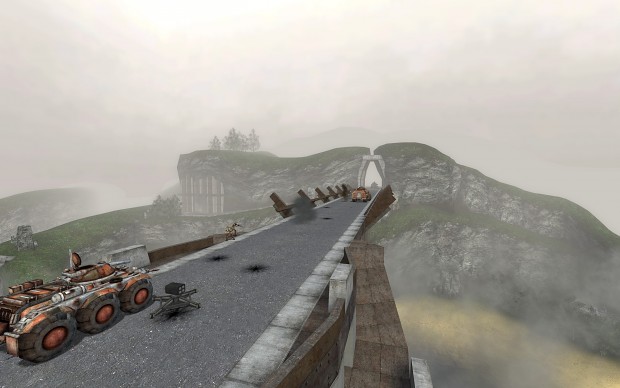 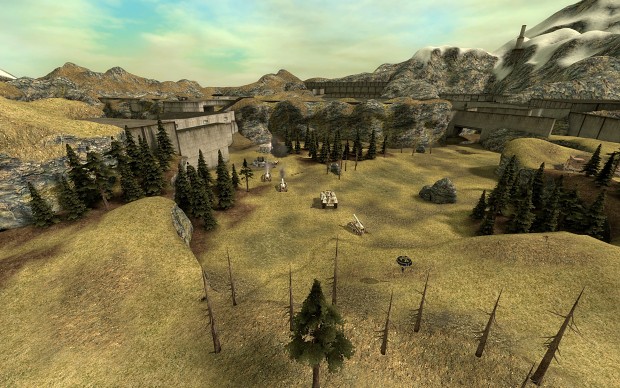 * Respawning in APC didn't fully change the loadout.
* Enemy units sometimes appear in the wrong area of the mini-map.
* emp_force_kill no longer prevents revive after respawning.
* Buggy cancellation of attack orders on infantry.
* Multiple selection for attack orders. (A box attack order now only selects one unit from the box for the order.)
* Client-side mortar collisions.
* Flag GUI not displaying on the first flag capture zone entered.
* Health/stamina panel not appearing when in command vehicle.
* Missiles no longer explode in NF light tank when fired to the right of the vehicle.
* Fixed incorrect implementation of scout vehicle speed upgrade skill.
* Designing a BE APC in the Vehicle Factory now shows correct side model view (AFV was shown before).
* Lost Coast models and materials will now work correctly (instead of Error boxes).
* Sudden death text at top of GUI no longer draws over number of tanks.
* BE wall now spawns at same height as NF wall (allows them to be fired over by infantry).
* Sabotaged turrets will no longer shoot at its hidden saboteur after being repaired.
* Scouts hide skill will no longer hide them from their own teams minimap.
* Smoke grenades in a vehicle factories build area no longer prevents the construction of vehicles.
* Health upgrade skill can no longer upgrade health to max health + 1.
* Vehicle camouflage textures now use significantly less video memory.
* When an enemy changed sides their corpse could be revived and they would remain on your side.
* Armour in vehicle factory build menu was the wrong length on some models.
* Engineer build menu no longer has title "Class/Weapon selection".
* When scout rifle was zoomed and weapon was changed with 'Q' there would be a strange zoom out effect each time you changed weapon as scout.
* Target display has been raised so targets on players are no longer at their feet.
* Skill bugs where skills could sometimes be selected but not working.
* Commanders no longer get stuck in command view if they open the servers message of the day.
* Can no longer see your name when looking directly up in spectator.
* Several exploits that could be used to crash servers.
* Armour no longer overlaps the vehicle factory vehicle customisation image for certain vehicles.
* Can now pick up mines after being revived.
* Can now enter command vehicle while its sliding down a hill.
* Crosshair could disappear when playing as scout when looking at certain distances.
* Vehicle heating could be applied by holding handbrake and forward or reverse buttons simultaneously.

/ Instant Heal removes bio damage.
/ Health crates don't give health in commanderless map Sudden Death.
/ Players can't be revived in commanderless map Sudden Death.
/ Players are moved to Spectator when dying in commanderless map Sudden Death.
/ The green crosshair when pointing at friendlies now extends across further distances.
/ Attack orders now expire depending on the position of the targeted unit.
/ Autospotting by buildings modified to spot only after an enemy unit attacks the building.
/ Changing emp_sv_commander_freeze_time now requires cheats to be enabled.
/ If a player with less than 100 health gets health upgrade skill their health isn't automatically increased to 130HP.
/ No longer need to join squads in order.
/ Research is now free.
/ Skill boundaries are now: 0/10/30/60.
/ Players now have hard collisions.
/ Reduced damage modifiers against map buildables for seismics and Depleted Uranium.
/ Increased Engineer tool healing distance by 50%.
/ Minimum value for spawn protection is now 0 seconds (server variable).
/ Increased vehicle costs.
/ Updated floor texture for Brenodi Empire Barracks.
/ Show squad menu when joining a team.
/ Minimum ammo box placement interval is now 60 seconds.
/ Building sabotage Damage Over Time reduced by 75%.
/ Vehicle weapons now have limited ammo again.
/ Updated emp_canyon.
/ Updated emp_glycencity.
/ Updated emp_crossroads.
/ Updated emp_urbanchaos.
/ Updated emp_escort.
/ Updated emp_slaughtered.
/ Updated emp_money.
/ Many balance changes. (These include, vehicle hull armour, engines and weapons, player weapons and walls among others) - These are far, far too numerous to write down individually. They'd end up with their own changelog if we did, so you'll just have to take our word for it that a lot has been done.
/ Updated NF Jeep model to improve visibility

Sounds great, thanks for your work!!

Great work guys, you really bring out the best in large scale combat in source!

I can only apologise for taking a little while with posting it to ModDB. The patch actually went live on the 27th of December, but I've just been so busy since then. I hope you guys all enjoy the new version. Expect more frequent updates from this point onwards.

And for anyone who checks the main site, I haven't actually posted this up there yet, only on the forums, so I'll be doing that in the next 48 hours.

I believe the term is REinstall, god damn I haven't played in the longest time, looks like my weekend is filled.

I need to get back playing this!

Extremely fun game. There is nothing like playing in a balanced 50+ players game of empires.

Downloading ASAP. You got yourself a new player O:

"It's also worth mentioning that since Team Fortress 2 became Free to Play, Empires is actually free for everyone, with no prior source games required!"

I have Team Fortress 2, and yet I can't play this game, it keeps telling me that hl2.exe in Source SDK 2007 wasn't found, tells me to click OK to start Source SDK 2007 to generate it, then close and restart Empires. This is the fourth time I have done this, and I have also restarted Steam twice, and checked where they were installed, and everything seems to be correct, so I can't figure out what the problem is.

Do you have more than one Steam account in your Steamapps folder, both (or more than 2) with SDK Base 2007 installed? If so, there is a bug regarding that, and we aim to have it patched within a week.

If not, then try re-validating SDK Base 2007. If all else fails, add me on Steam @ Trickster9012, and I'll try to put you in contact with our coder who should be able to help you work this out.

Ah, yes I do have more than one account, glad to hear you're solving the issue! :3

Only thing i dont like is new interface for skills. Everything else gg.

Every update since 2.0 I've always scanned a looked under 'added' for aircraft, alas tis not the day for aircraft once again BUT! Coolios.

Now if we you can remove all the insecure raging brits from the game. Not complaining, just saying it would help insure Empires doesn't turn into "******* elite n00b" mod.

Awesome! Empires is my favorite mod. I am very happy to see it being developed again.

The downside of half life 2 not having built-in bots like games such as Unreal Tournament is that fantastic mods like these remain unplayed.

back from the fing dead!!!!