As is probably now a yearly thing, last weekend some Traction Wars developers descended upon the Earls Court Exhibition centre in London for a huge showcase of the latest games, technology and queue control. The event saw four of our devs manage to come together for the first time: Interaction Designer [TWDEV] hannibaldinski, Lead Artist [TWDEV] volcol, Modeller & Texture Artist [TWDEV] brrr, and Lead Composer/Sound Artist [TWDEV] calgoblin. We spent the weekend playing games, meeting developers, and of course pointing the world in the direction of Traction Wars! 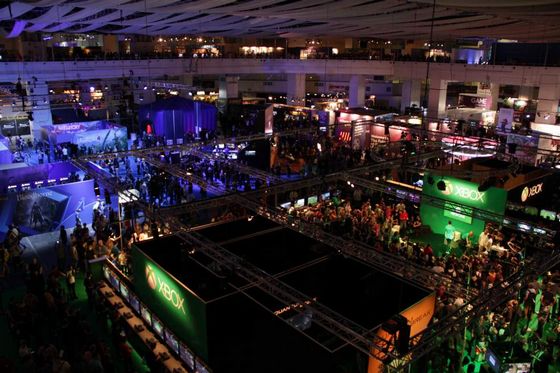 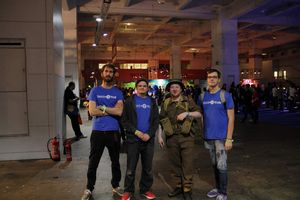 The EGX 2014 show floor. Don't be fooled by the green and blue, there were smaller and less shouty marketing elsewhere! 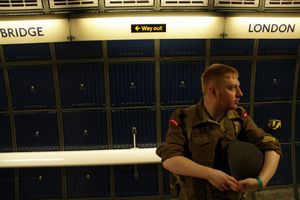 [TWDEV] volcol wore this WW2 British uniform to promote TWs. It was an incredibly warm day, but it worked!


Last year I said that the Oculus Rift was like having your head pressed up against an old CRT television. But having tried out the second iteration of the virtual reality headset, I can gladly confirm the Oculus has improved. Dramatically. During the 3 minute demo of EVE: Valkyrie the increased resolution was apparent, and incredibly engaging. Though the game was only in an Alpha stage, it felt immersive, and for those 3 minutes we were fighter pilots. Looking around the cockpit (now with depth support!) was exactly what VR should feel like. The resolution could still be improved, as it now feels like your face is pressed up against a PC monitor, but the future of VR seems strong. Especially for vehicle based simulator games like EVE: Valkyrie.

Elsewhere we played some more traditional games including starting with Far Cry 4. The demo started hijacking a nearby Elephant, using it to crash into an enemy base and then going Rambo on the local militia with an MG42, it seems Far Cry 4 will be as enjoyable as the last. (It must be known that [TWDEV] hannibaldinski shot his Elephant straight away. He's a bad man.) We also got a chance to demo Alien: Isolation, an incredibly atmospheric and horrifying game that may have finally captured the setting of the original series for the first time ever.

Dying Light, the next zombie game from Dead Island developers Techland was promising, especially if you have a violent, bloody, zombie shaped hole in your Steam library. (Or PS4 or Xbox One of course - but we played on both Xbox One and PC and... well, you can guess which was better.) We also attended a developer session preview for EVOLVE, which looks set to be an enjoyable and frantic multiplayer monster 'boss fight' game, where four humans team up to fight one massive monster. It got me excited for the upcoming alpha we were given codes for. 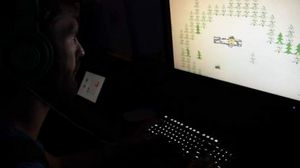 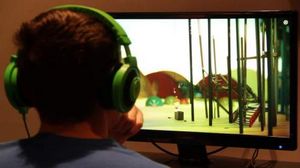 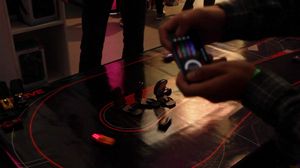 [TWDEV] hannibaldinski plays the visually fantastic A Light In Chorus.

The most enjoyable part of events like this is meeting fellow developers and exchanging discussions about projects. We were very impressed by a number of indie games, and having the chance to speak to their developers was a much needed release from the large scale marketing seen elsewhere in the expo. [TWDEV] hannibaldinski absolutely loved the art style of A Light In Chorus, and with its particle based visuals it's hard to argue with him. [TWDEV] volcol spent time at the Verdun stand (which we can forgive him for as he worked on it!) and seemed incredibly happy with the response from the expo visitors. [TWDEV] calgoblin was mesmerised by Mushroom 11, a 2D platformer with a difference, and the PSVita game Velocity 2X. (But that may have been more to do with it being the only PSVita game he found in the whole show!) We were also pleased to learn about something called Anki Drive, a remote control car battle game using an incredibly advanced camera system and smart phone controllers. Think of it as an advanced Scalextric, but with more freedom and lasers.. 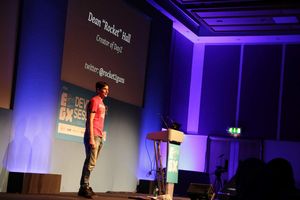 One of the developer sessions we attended was a talk from DayZ creator Dean Hall about the challenged of an online multiplayer game. Very relevant! 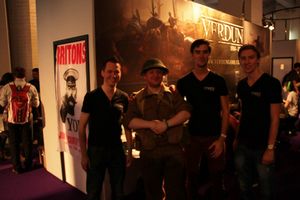 [TWDEV] volcol poses with fellow team mates from Verdun. Maybe he should have worn a WW1 uniform as well!

We had great fun at the expo this year, met some interesting people and played some exciting games. But really the best part is meeting up with fellow Traction Wars developers, and being able to talk about the game in person. Making a game is an incredibly involved process, and the only thing we really suffer from is only being able to work on it in our free time. This means it takes longer, but it is still incredibly rewarding for us. One year we may well be at a show like this, but just being here without exhibiting is inspirational and cements our reasons for taking on the mammoth task of creating Traction Wars. So please, be patient with us. I understand it has been a long time coming and, although we try to minimise hype, expectations and excitement will inevitably occur. But just like the satisfaction we get from talking to people in the real world, an online community complimenting and admiring our work is rewarding and motivational. So I'll leave you with a few remaining photos from the weekend, including the obligatory pub shot, and the very first TWs LAN match! 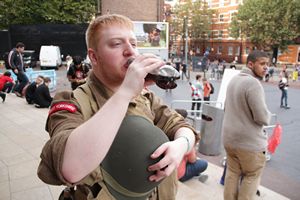 [TWDEV] volcol drinks like the soldiers during the war, from a bottle of Coke Zero! 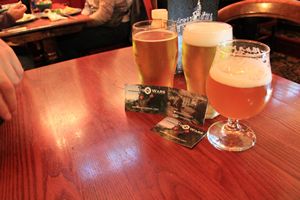 The best Traction Wars discussions happen in the pub, with the help of our beautiful new promotional card! 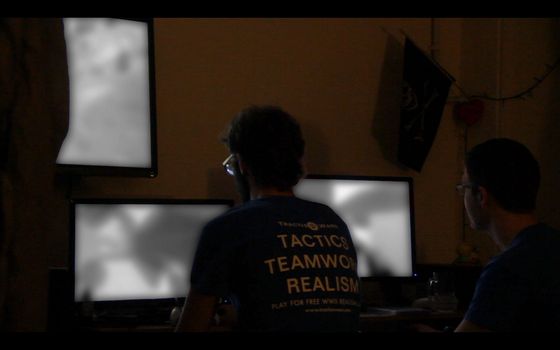 Sounds you guys had great event :)

Just curious, maybe its already been addressed, but why don't you guys do a kickstarter? I mean all the red orchestra players are guaranteed sales, and a good chunk would probably back it. If it doesn't feel like you guys will make enough money to support yourself, and the project then I understand. However, you deserve to be paid for the work you do in your off hours. So maybe you just ask for a small number just to give you, and your team a little bonus. I know that I, and many others would love to support you guys monetarily even if it's just enough to help pay a few bills, and give your team more motivation to keep up the good work. Just a thought.