We have released our second bug fix update for the Edain 4.0 Demo.

Patch 4.02 for the Edain 4.0 Demo is now available. You can download it by updating the mod via the launcher.

If you encounter any problems, visit our support forums for help!

With this update, we not only squashed numerous bugs, we also expanded and refined the core gameplay introduced with version 4.0. There is no new faction yet, but Dwarf fans can look forward to a new custom hero, the Wanderer: 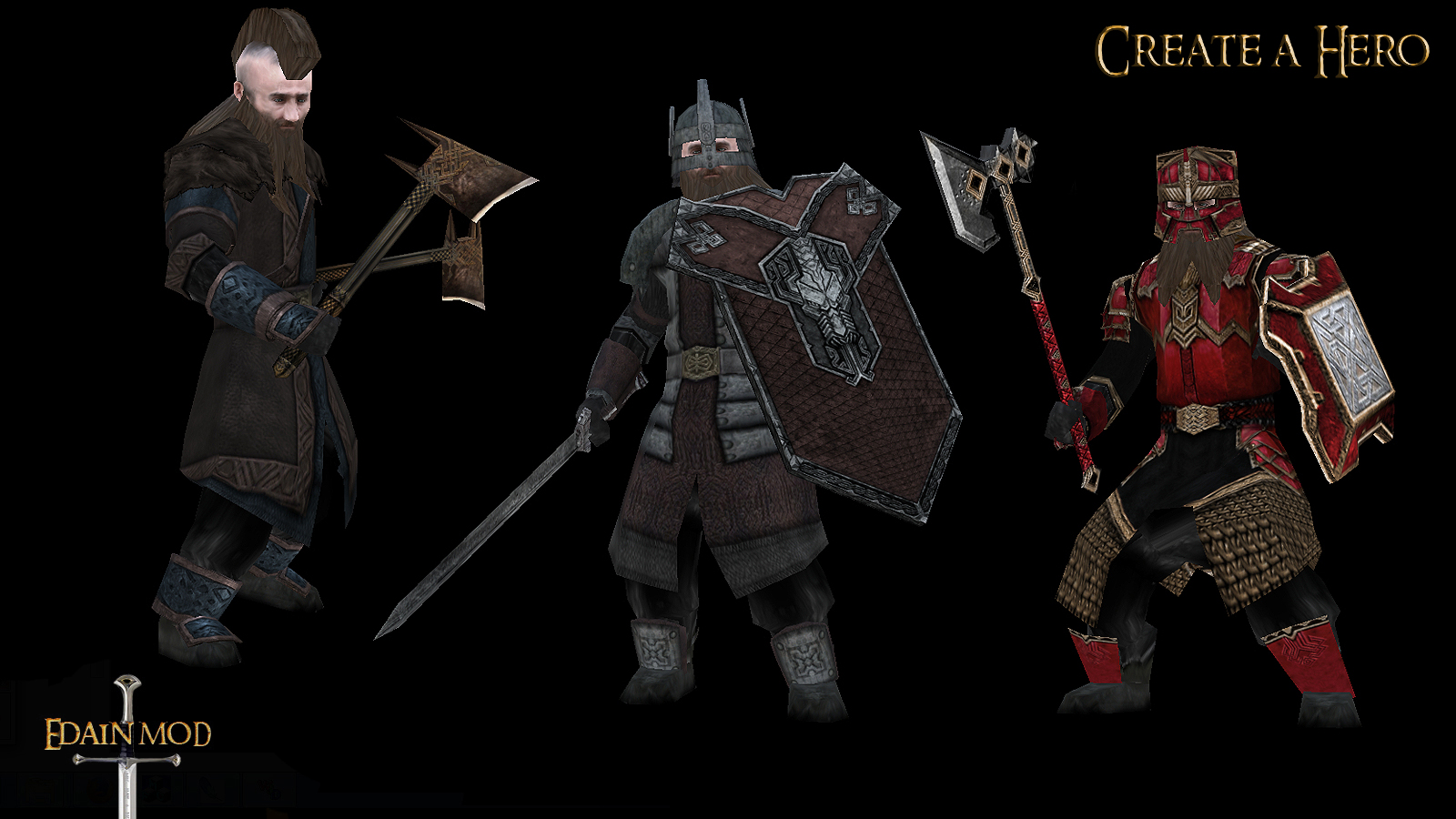 - Most maps now offer a larger number of settlements and in some cases outposts. This allows new paths for attack, grants players more money and enables more strategy that rely heavily on outpost structures. For example, Fords of Isen now features 14 settlements instead of the previous 8.

- Every faction now improves its recruitment structures in a different and unique way. We wanted to add more diversity and give players more control over their strategy by allowing them to tech towards specific upgrades and units more specifically.

* Mordor is the only faction that still upgrades its structures the old way: They gain experience by recruiting units.

* Gondor is going back to the original 3.8.1 scheme. Each recruitment structure can be upgrades to rank 2 and 3 individually by purchasing upgrades. That way, they can unlock things like Tower Guards or Fire Arrows more quickly, but have to spend money on that in return.

* Rohan improves its structures using a different version of that scheme. Each recruitment structure has two distinct upgrades: The weapon chamber unlocks advanced units and technologies such as mounted archers and flaming arrows, while the recruits' chamber increases recruitment speed by 50%. These upgrades can be researched in any order, giving Rohan more flexibility in terms of strategy.

* Isengard upgrades all its structures at once using global upgrades that bring the Uruk Pit, Warg Pit and Siegeworks to rank 2 and then 3. However, these are more expensive than Gondor's individual upgrades, so Isengard can't tech towards a single unit or technology quite as fast.

- Unit upgrades like forged blades are now researched twice as fast and grant additional bonus effects on top of their previous bonuses. These are meant to be effective against specific strategies and open up new ones in return:

* All units at rank 2 (including all units with banner carriers) become fearless and therefore immune to abilities like Boromir's Horn and the Nazgûls' Screech.

- In turn, upgrades are now only half as effective against heroes and structures.

- Note that heroic units like the Citadel Guard are equipped with every upgrade from the start, so all these changes apply to them by default.

- There are no longer any unusable camps and castle plots on War of the Ring maps. Instead, they are all replaced with fully usable outposts. This was our intention from the start, but the replacement was bugged and simply rendered the plots unusable instead. The idea is that you can only build smaller bases in War of the Ring, making individual battles shorter and the army you bring more important. Of course, you can still fight for huge fortresses when you attack maps like Helm's Deep, but the normal War of the Ring battle will have less base building than a Skirmish - though still more than in the previous version where most plots where entirely unusable. We feel this is a good compromise. Additionally, you can now garrison your territories with armies that can take up twice as many command points.

- A new game mode replaces exploration: In "Massacre", you can only have up to 600 command points, heroes have 25% less armor and units have half the armor. This makes for smaller, but also much faster battles. In addition, we have fixed the command point bug with the Legendary Heroes mode so that it should now be playable normally.

A full list of balance-changes can be found here.

Enjoy the update!
Your Edain Team

Really nice work guy!!You just continue to make this wonderfull mod eve better and better every time,but for me it always wil lbe the BEST ONE THERES IS!! :)

The Dwarven Samurai will rule the all !!!

Thank you for the great work and the time you invest in this. But I am not sure about something: wouldn't making units at rank 2 fearless render a good number of stuns and fear abilities useless (Gothmog's aura of fearlessness would be useless once all orcs reach level 2 with Sauron's influence, and Boromir will become less desirable early on due to one of his signature abilities being so limited, Nazguls will not be scary). While it is understandable that in some cases it is ridiculous to see everybody running around like chickens or cowering in front of the enemy, about everybody will try to get level 2 units at least due to the renforcement bonus to squads. Would it not be a better approach to apply reduced effects to stuns and fears as units gain levels (level1- 100% duration, level2-75% duration,...level 5,completely fearless). Another option would be to try and apply special effects to certain fear abilities, such as Aragon's elendil to remove war cry effects, or boromir's horn to inspire friendly units momentarily?

I agree. Increasing the stun/fear resistance slowly as troops gain levels seems like a much more balanced solution, rather than granting complete fearlessness upon reaching rank 2.

Thanks. elves units needed? When will?

Keep up the awesome work, guys!

Thanks for the new update, as always I appreciate the work you guys do!

What do I use to open it after download. My computer does not have anything on it that will open it.

it's an exe file which should open itself. after clicking the file, wait a couple of minutes as the installer will be loading files (about 2GB) then it will show you in the installation interface.
if it's not opening at all then you probably got a damaged file during the download. best solution is to download it again from another mirror (when you click "download" on moddb, a pop-up shows; in it click "mirrors" and choose the closest one to your region or the one you find to be the least busy).

Do you have enough command points? since the reinforcements are permanent units, they take up command points, so make sure you have at least 120CP free.

Thanks for the latest update, Edain-team. I really like the upgrade additions to barracks, stables etc; these make play more enjoyable!

Is it possible to change the Spear throwers of Rohan to normal Spearmen, i.e. they don't throw their spears but use them like Gondor and Uruk pikemen?
Because they don't seem to attack things successfully unless you specifically point out an enemy (building) they have to attack.

I mean no offence when I make this suggestion , but is there anyway you could make forged blades only glow on the banner carrier?

We want them to be visible all the time - what happens when the banner carrier is dead or your troups haven't reached level 2 yet?

Especially for MP it's really frustrating when you can't see if a unit is upgraded or not.

I get that I suppose, it just seems a bit lore breaking with the look if light sabers running around. I know sting and first age forged eleven blades would glow near orcs and the like but still haha.

I like the upgrade system for buildings! I very much like deciding whether or not to pay for an upgrade in particular buildings and not having to crank out and pay for 30 gondor archers to get fire arrows lol. Good stuff guys!

If U prefer I-Rangers, that is good stuff :D Gj
In this patch i find some bug, Rohirrim dont decrase cost with Stud farms. Am i only1 who have that bug or not?

Thank you so much! The new dwarven heroes are just AWESOME

Hi edain team, only a question, if you can answer it, i will apreciate it, can you update it with the spanish language, please?

Unfortunately the team lacks the language skills and the time to translate it to other languages than German or English.
However, anyone if welcomed to translate it to his own language if he can.
Before the english version, a guy made a simple google translated patch for Edain which many used until the english 4.0 came out.
You're free to do the same. all the files that contain the texts are in the Lang folder in the game directory.

can you make elven sword men in costum heroes plese??

sounds good so far, you guys never seem to cease to impress. one question though, must one uninstall the whole thing every time he wants to switch back to 3.8.1? I ask because the people I play with are too attached to free-build and I can't keep uninstalling/reinstalling every time we decide to play.

There're two solutions for your problem:
1. get a second PC with RotWK + Edain 3.8.1 :P
2. Try to make a second copy of the game and see if it can run together with the original.

unfortunately the latter proved to be impossible, I had tried to have two separate versions of the game earlier (I hate 1.06 bitterly, profusely and immeasureably from the bottom of my heart) where it wouldn't work, and neither did it this time.... sigh... guess I should start saving up for a new computer....

The custom heroes is unbalanced with other heroes coz they have low basic hit dmg, and Archers have so much range(but low dmg), and dmg of them dont show in game when u spawn them(when u put ur cursor on picture). It's that bugs or my Edain core is ruined and only I have that bugs? :)
Thanks for answers :)

Custom heroes can't be made to show you the values of attacks due to technical reasons.
Archer are powerful because they have long range. They dont need more damage (otherwise they will be even more op than it was in 3.8)

Custom heroes can be configured in your CaH without making them 2OP. f.e if you gave a hero too strong attack he will have low health and vice versa. They can however have very powerful spells that can help you alot.

Custom hero, f.e. Warrior Capitan of Gondor, he most 4 times hit Orc Warrior to kill him with basic attacks. Gondor soldiers have more dmg than custom hero.
Archer when I max his Perspicacity, he have double range of Faramir.
Yeah U have right about spells, they are powerfull, and U can decrase cooldown maxing Will power, and u still get 2OP. This Custom Heroes most be balanced.

here's the thing: they can't be balanced!
they're meant to be your own cool awesome team of heroes which you customize yourself. you can make them balanced or OP as hell. it all comes down to you.

The voice of the King of the Dead is still in German in the English version :-)

Is the WOTR fixed as well? please say yes!!!

The installer crashes whenever I click update. Is it just the size of the update that's causing this or should I uninstall it and start from scratch please?

Bfme 2 and Bfme 1 transition? wall and not wall?

I can't update. It says can't connect to the server. Please help me because I don't get help on the forum.