We're happy to present the new spellbook for the Misty Mountains in the upcoming version 4.6.

If you've followed our updates over the last days and weeks, you know that we were quite busy and the development of 4.6 steadily continues. Today, we'd like to share another big element of the upcoming version: The new spellbook of the Misty Mountains. 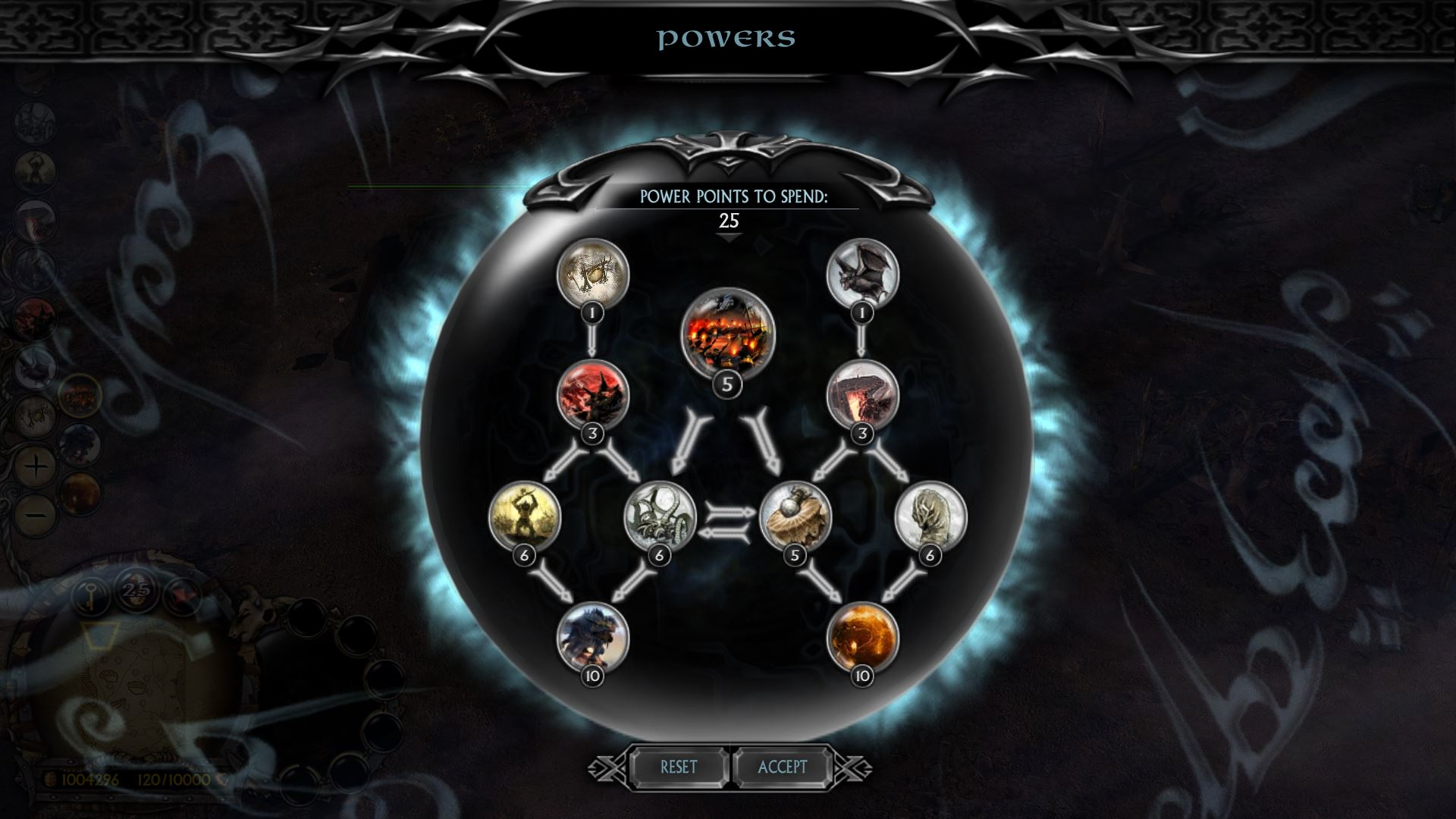 As you can see... things have changed.

Starting off the long term spelltree is the Drum of the Misty Mountains. Upon summoning, it buffs allies in a large radius by +10% damage and +20% movement speed. Compared to similar spells, it may not be as useful to straight up win a fight by giving you strong bonuses, but the speed advantage more than makes up for it, allowing you to use your superior numbers to easily flank and encircle enemies. On the right side of the spellbook, the Cave Bats have remained on their spot.

Following the Drum in the left spelltree is another classic spell, Untamed Allegiance. Here you can unlock two spells simultaneously: One summons a wild lair, the other can bring any wild den on the map under your command. Since both spells can become useless without the other, you now get access to both of them at once. We also improved the summon in a way that reduces randomness, so you no longer need to fear summoning five Warg Lairs in a row when you just wanted that Trollcave. The second spell on the right side is Onslaught from below, initially developed back in 2013. It allows you to reinforce your position with a considerable number of Goblins from all three realms through a summoned tunnel - but pay attention to your tunnel! If it gets destroyed before your reinforcements have made it through, the stream of orcs ends prematurely!

Untamed Allegiance and Pact of Hatred

The third row has seen some exciting changes due to our new spellbook structure. The offensive right spelltree offers you the Wyrm. It remains unchanged as a classic destructive spell able to burn hordes of enemies. Its companion spell in this row is Drums in the Deep. Inspired by the iconic scene of the Fellowship waking evil in Moria, all your units on the entire map move faster and do more damage for a medium duration upon activating this power.

The Watcher in the Water has been moved to the left spelltree. This only seemed logical considering its role in the lore. Unlike other summons, it is no longer on a timer, meaning that it will stay on the battlefield until it is destroyed. This way, the Watcher offers the Misty Mountains a means to defend key locations, something that can sometimes be quite difficult to do with nothing but Orcs and Goblins. Enemies shouldn't feel too safe by staying out of its range, though, because it has access to a new ability: After considerable time has passed, the Watcher may retreat back underground where it heals, only to emerge again at a different location. If the enemy doesn't come to the Watcher, the Watcher comes to your enemies - or something along those lines.

The second spell on the left side is a completely new one and focuses on the three Orc Realms, allowing you to give strong advantages to one of the three.

Eternal Strife: The goblins are forever fighting amongst themselves for power and only rarely unify under a single banner. Choose one Orc Realm to temporarily grant it a position of surpremacy. It gains strong advantages and can additionally recruit all of its specialized units from settlement buildings for a medium duration.
Using this new spell on one of your tunnels gives its corresponding realm two advantages. The first is specifically designed for each realm: For Moria, all poison damage is tripled; for Goblin-Town, all units streal three times as many resources and buildings earn additional income; for Gundabad, newly recruited units already come equipped with upgrades. The second advantage is that it allows you to recruit units of the selected realm on settlements. This power is very versatile and can cause all kinds of problems for your enemies by either swarming him, stealing all his money or creating an unusually powerful army. It is also just the right choice if you always wanted that vast Gundabad army and never had enough buildplots to spare.

This spellpower is representative of the barbaric nature of the orcs, who are divided into many clans and tribes and are often fighting amongst themselves. Upon activating this spell, one of the three big realms gains a significant advantage, giving it access to all the best loot and expanding its influence over all wild pits and caverns who will now follow this realm. Since buildplots are limited, this gives you the opportunity to build vast armies of your preferred realm without sacrificing too many other buildings, which is especially important for Gundabad and Goblin-Town. The spell isn't permanent, however, and has to be cast again after running out. That seemed much more fitting to the Orcs than the alternative of being a permanent choice, considering only Bolg is known to unite all creatures under his banner for an extended period of time. We also think it creates more interesting gameplay. 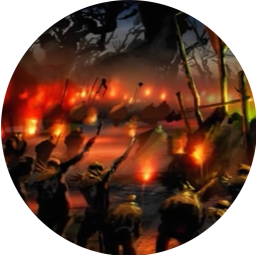 Most of you will not be surprised to find the Scavenger spell in this spot. As fitting with the theme of orcish raids as it is powerful, no spellpower suits the Misty Mountains more than this.

This leads us to the two ultimate spells of the Misty Mountains. In the past, two powerful destructive spells could be found in this row which were both quite popular - but there was no doubt that the Balrog was going to take the spot as the ultimate offensive spell. Since the original BfME I, the Demon of the Ancient World brings nothing but devastation to the poor souls that didn't run for their lives.

The counterpart in the left spelltree implements the other famous monsters, whose potential for destruction can rarely be rivaled in the Third Age. Beasts of the Ered Mithrin summons a Dragon Lair guarded by several uncontrollable Dragons. The lair constantly generates resources, offers bonuses to nearby dragons and recruits Fire Drakes. These start as vulnerable earth-bound creatures, but can develop into fully grown dragons able to take flight.
Our initial plan for dragons saw them as one of the options for outpost buildings. Several reasons made us change those plans. First of all, it seemed inappropriate for dragons to just march into battle alongside all of the other creatures of the Misty Mountains, almost like ordinary soldiers. Dragons are well known to follow their own agendas, as seen with Smaug or Glaurung, and it is highly unlikely that they never thought about even a single Goblin as their equal. This makes the spellbook a great place for them - only when the battles of Orcs and Goblins pick up pace and turn into great campaigns does it catch the attention of dragons. At that point, they also throw themselves into the fray on the hunt for the best loot for their Lair, driven by their greed for riches.

The Dragon Lair also has access to the Dragon Strike as a powerful defensive ability, summoning an adult dragon to burn friend and foe alike in the target area. The range of this ability is however greatly reduced and can no longer be used across the map, leaving you with a choice: Do you summon your Lair in the safety of your own base and force your dragons to fight far away from it, where they are more vulnerable? Or do you risk the destruction of the Lair to place it more towards the front, where I can make use of his incredible defensive capabilities?

We hope you liked this update and are as always looking forward to your feedback.

Such an awesome spellbook with so many great and unique concepts. Really well done!

Merry Christmas to you as well Edain Team. Hope you're staying safe and healthy.

An amazing job Edain Team Absolutely well done, the fact that you kept the Dragon Strike, the earth-bound Dragons who evolve to full-grown dragons just like I wanted, same for Untamed Allegiance.

And your Watcher in the Water, amazing idea to make it without time (Never seen it in the other mods), the fact that it can disappear, healed etc... Good job

Merry Christmas to all of you Edaim Team

Wow amazing! My 4.6 stoke has never been so high. Merry Christmas ET! You guys are studs!

That's a maniac spellbook! I can't wait to play with MM! :D

This looks great.
Why Untamed Allegiance is not split to 3 separate spells for each lair like Minions of the White Hand spell?

I think Goblins Lair, Warg Lair and Troll Lair should be separate spells. I don't like idea to summon random building.

It's not random, the summon cycles through all different lairs so you'll know which one is next and can plan accordingly.
You can also choose not to tame your summoned lair, but one that is already present on the map. In that case, you could then use your summon for experience/gold or slow down your enemy with it. Lots of opportunities.

Since I didn't play Goblins in the 3.8, what are the spells unchanged (central and Onslaught from below) ? :)

The central spell Scavenger gives you money for every enemy you kill.
Onslaught from below steadily summons up to batallions of orcs from a tunnel. Destroying the tunnel stops it from spawning more orcs. You can see a preview image if you follow the link in the article and scroll down a bit.

Cool stuff guys. So is Smaug not going to be in the game then? Just wondering.

IM SO HYPED I CHECK THIS PAGE DAILY! GOD BLESS THIS TEAM AND THIER AMAZING WORK

I love your team. You are doing great things.

So uh, I'm actually super late, but I just wanted to say how awesome you guys are and how much joy this mod has brought me and so many others (no doubt something you've already heard....read?)

Anyway, the MM spellbook seems awesome, and I can't wait to try it out. To tell the honest truth, I'm a little bit worried about the amount of work you guys are taking on, but I'm sure you won't have a problem this time, you guys know whats too much and too little, so its probably nothing to worry about.

Anyway, let me cut my rant off, and just say thank you again for the great mod. Hope you guys are doing well, bye :)