Showcasing the buildings, units and heroes of the first of the three orc realms that make up the Misty Mountains faction in Edain 4.6.

Posted by ElendilsCousin on Mar 3rd, 2021

After a quiet start into the new year, we want to show you the first big orc realm of the Misty Mountains in Edain 4.6. We had presented our general faction plans a few years back, and much of it has remained unchanged - but several adjustments have also been made, and so we decided to share them with you. The changes to Gundabad and Goblin-Town are a lot more significant, so we'll start with Moria: You will still begin each battle with a Moria encampment and then use pioneers to construct tunnels to expand your base. Here is an updated look at the buildings, units and heroes of the inhabitants of the ancient dwarven realm. 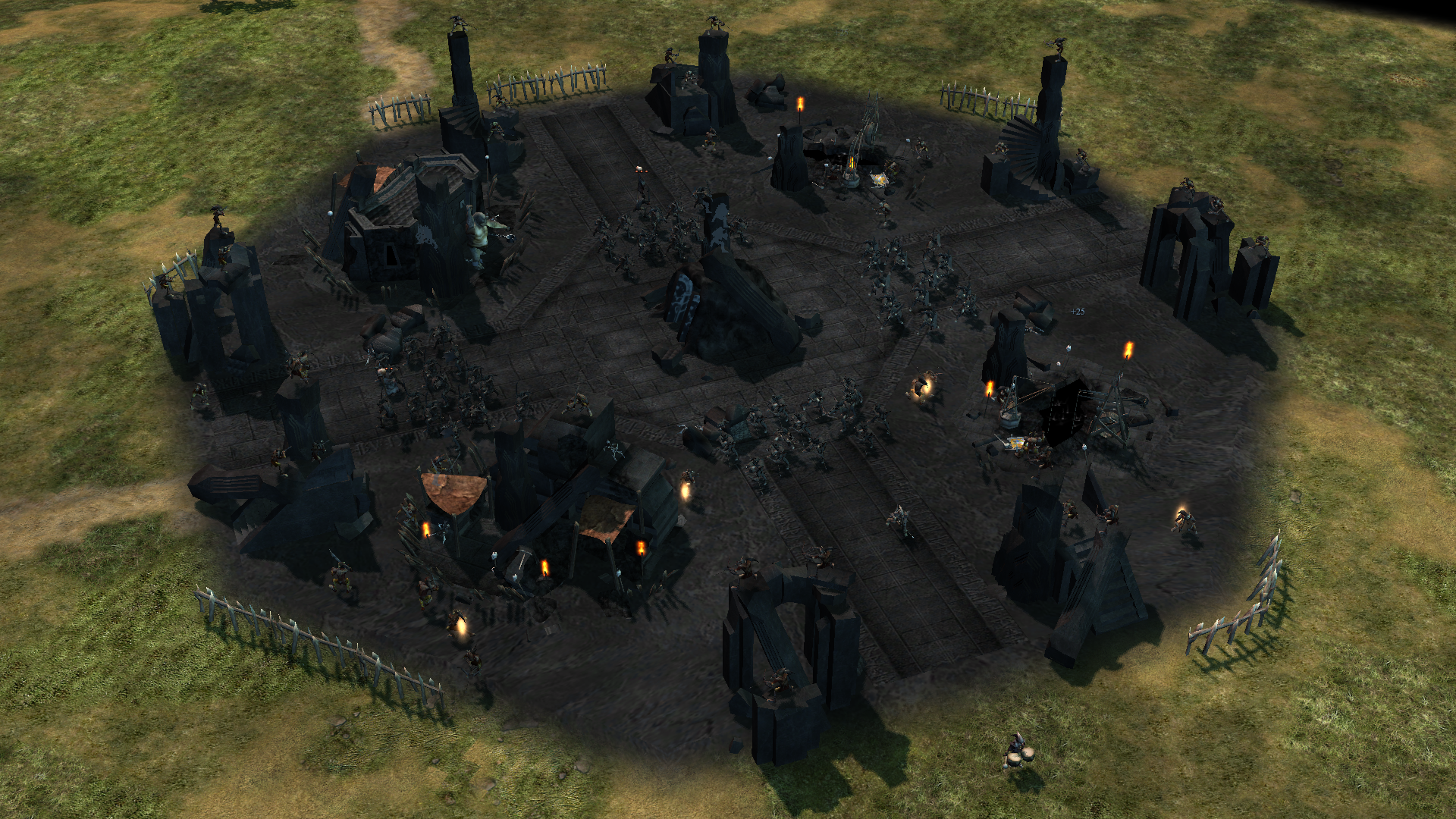 Moria gives you access to the Ransacked Mine, an economy building that reduces the cost of other buildings. Since you will always start with a Moria tunnel, the reduction in building cost is most notable here: The earlier you get it, the faster you can expand your territory.

The Ruin recruits the numerous hordes of weak and devious goblins that the Fellowship of the Ring encountered during their travels. Both Warriors and Archers are quite weak, but they can drag enemies with them to their death through their poison attacks. At level two, it can recruit Moria Drummers.

The Monster Cage recruits powerful beasts that provide much needed combat power. The battle in the Chamber of Mazarbul showed us that Moria wasn't just populated by Orcs, but other, deadlier creatures as well. Like the other two buildings, the model of the Monster Cage is based on old dwarven structures from Moria's glory days. The goblins defiled and took control of them after their previous owners were driven out of Moria by the Balrog. 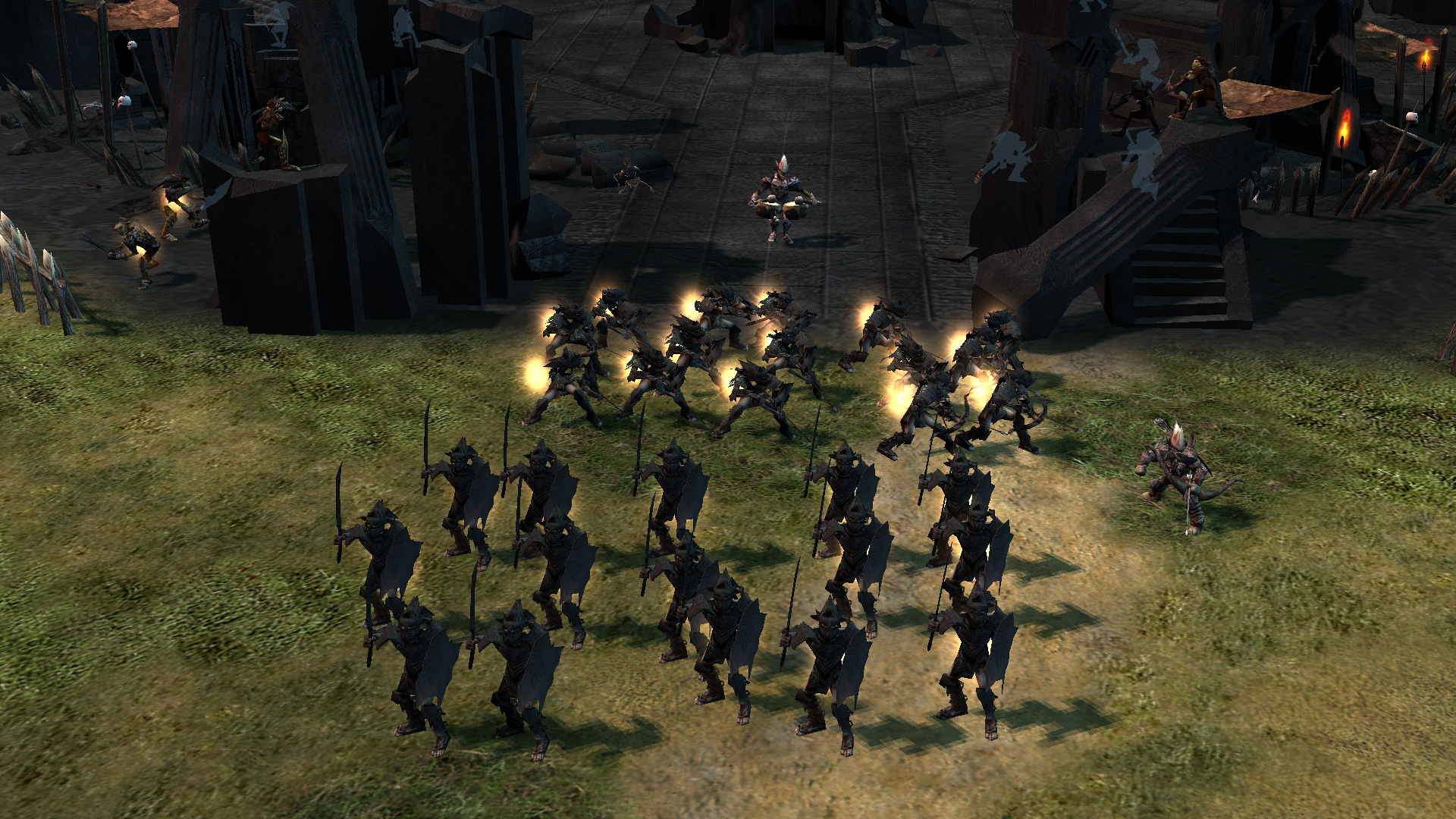 Moria Warriors are available in the Ruin and serve as the starting unit of the Misty Mountains. Although they are rather weak in direct confrontations, they can quickly swarm and flank enemies due to their low cost and fast recruitment. They can activate their poisonous weapons to inflict damage over time to enemies, making them dangerous even from the grave. They use a darker and more intimidating armor than their counterparts from the settlements who don't have access to poison.

Moria Archers are the best archers of the Misty Mountains - but that isn't saying much, because they'll get the short end of the stick against most archers of the other factions. That being said, they also have access to poison to increase their damage for a short time, and their strength lies in numbers, so underestimate them at your own peril!

Ork Drummers are available at level two in the Ruin. They incorporate the theme of drums into the actual army of Moria and provide valuable mobile support, perfect for the swarmy nature of the faction. Goblins near a Drummer gain increased armor, deal more damage and are resistant to fear. 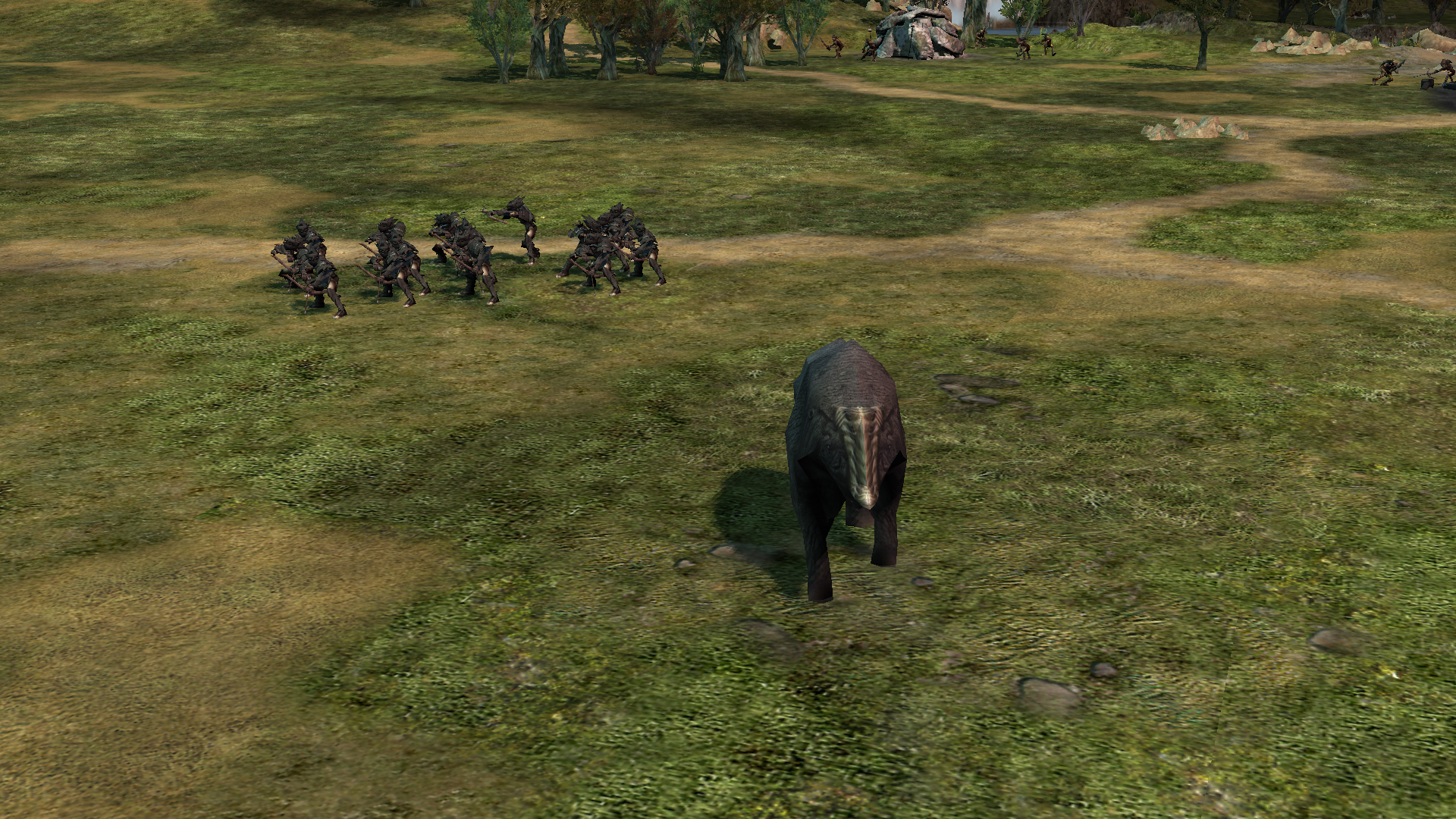 Great Beasts are bred in the Monster Cage. Not quite as intelligent as Trolls (if that's even possible), they are used to attack fortified positions. Even the gates of an enemy fortress can't withstand their assault. Their thick skin makes them practically impervious to arrows, but they are vulnerable to melee fighters getting close and targeting the weak spots on their lower body. Opposed to Trolls, who possess great mobility and a dangerous ranged attack, these beasts are the prime choice against strong defenses with towers and archers, similar to Battering Rams of other factions.

Cave Trolls can be recruited at level two in the Monster Cage. Unlike their relatives, they can't benefit from Mordor's gigantic war machine and don't have access to any armor or weapon upgrades. To make up for this, they deal high damage with their rock throws from a safe distance. Enemy archers will have to be careful, because these trolls aren't easy prey!

As showcased in the past, the design of Gorkil will be used for a new hero in 4.6: The Moria Chieftain who attacked Frodo in the Chamber of Mazarbul. He embodies the style of Moria, where quantity always beats quality, by summoning reinforcements straight into the battlefield. As a ranged hero, he is also hugely important for dealing with opposing monsters. His abilities have largely stayed the same:

- Rank 2 (with sword) "Skull Totem": Plants a skull totem that empowers nearby Orcs.

- While using the bow, Skull Totem is replaced by:
"Trollslaying Arrow": The Moria Chieftain shoots a gruesome arrow at any monster, causing it to deal 90% less damage for a time. Can also be used on your own monsters.

- Rank 7 "Call for reinforcements": New warriors are awakened in the pits and sent out. A chosen tunnel temporarily replaces fallen units of nearby hordes.

- Rank 10 "Vast Legions": Temporarily doubles the chance of summoning Goblins through attacks. While the ability is active, the Moria Chieftain will summon stronger warriors that are already equipped with heavy armor.

That's amazing guys! I wish you all the best! I can't wait to play! :D

EDIT: Wow those Goblin Warriors looks like touched up a little...XD

Uhhh la laaaa, making the hidden gate -now broken- as citadel is such a nice touch!

Looks interesting! Couple of questions though:
1. What are these "Great Beasts", are they an OC or is there lore on them?
2. Also, can Cave Trolls still attack in melee (weapon toggle) as they could in vanilla?

1. They are the same beasts that were used in the Slaughterhouses and the old dwarven battlewagons in BfME. Possibly they also pulled Grond in the movie, but I'm not sure about that one.
2. Cave Trolls can attack in melee.

Ah, I had completely forgotten about those. I always figured that the melee/ranged toggle would be sufficient for the Mountain Troll as Misty Mountains' early siege/monster unit, but this take is interesting as well. Glad to hear that they remain largely untouched, since they are on of my personal favourites.

VERY cool update! To be honest, I don't like the look of the fence structures around the citadel. My first impression was that they were made by men and not by goblins.

Great write-up! Moria looks like a lot of fun. Looking forward to those Stone Giants!

You guys are so amazing!!!! XD

I'll admit, the Great Beasts threw me off a bit there, but I can see them in the faction. But I think it would be cool if you implemented the untainted version into the Dwarves somehow (just to give an idea of where they came from, unless they're something like Nameless things? Very curious creatures).

I've been dying to ask this since way before I joined moddb, and its not really related to this article (or update), but would it be possible for you to give Erebor Dain his old BfME voice? I think its more fitting for the older, wiser Dain, and since Dain was kind of young in The Hobbit, it wouldn't be unbelievable that his voice changed. The two voices actually sound quite similar.

Sorry for the long message. Keep up the great work :)

Giving Dain his movie voice over his old BfME voice was a community request.

Hmm, although thematically the Great Beasts should fit well with Mordor, I can see them having an important role in the Misty Mountains. I was wondering if you'd make a showcase video with the pioneers. I can't quite grasp how this will work. What about outposts and settlements?

Outposts and settlements still work the same.
We might showcase the pioneers in a video once all bases are done.

So there can be three lairs? I mean 1) you can summon lair 2) build lair on settlement 3) and neutral lairs which you can control via spell
I dont know isnt it too many lairs?

1) and 3) are the same - the spell lairs give you something special compared to the ones that are buildable.

No Moria Orc Spearman like the previous version of the mod (3.8.1)?

No, instead the player will have to rely on warg packs from the settlements to defend against enemy cavalry.

Well, no spearmen in the Ruin.

Shame, in 3.8.1 I loved spamming them along with swordsmen and archers to overwhelm the AI, it was so fun to see the weak goblins got slaughtered if they failed to win.

Would it be possible for us to add them by doing some modifications in the commandset file?

I didn't say they're not available at all. ;)

Seems a bit strange to remove Spiders from the faction for thematic reasons to end up giving them the great beasts. Especially when the Spiders are closer to their lands and largely more independent from Mordor / Dol Guldur but hey.

Spiders aren't completely removed, they just didn't fit either of the three orc realms of Moria, Gundabad or Goblin-Town. You'll still have access to them via Untamed Allegiance.

Just the Spiderlings, or the Spider-Riders .... ?

we are already fed up with images. finish soon. with the pandemic you should be at home producing more.

Not all truths are for all ears.

Great Beasts do not look like something that would live in the mountains, even less so in the caves - so I'm not convinced they fit with Moria thematically. I understand the need for unit variety, but why not make a heavier Moria troll for example?

We are discussing some small changes to make them fit better.

What do you recommend to run Edain smoothly? I can download it and play, but it lags quite a bit, and I don't get that with the vanilla BFME games.

Enable the experiment boost and 4GB patch in the launcher, lower/turn off shadows, lower other settings as need be.

I have a question about Angmar:

I know the team created some heroes to give Angmar more depth, since they lack in that area, but did the team ever consider creating Agandaur or Mordirith as potential hero units?

I know they aren't canon, but since other heroes were created, I figured it would make more sense to use characters that have been used in other LOTR works, plus they are really badass and more consistent with the faction. Just a thought!

Most of our 'own' Angmar heroes were created on the basis of an Angmar RPG that several team members took part in over ten years ago. We're really happy with their design, so no need to change anything.