Today we start a tale of sound integration and a voice that will mumble, fumble, scream and shout, while you’re ruining completely everything.

Time for our inconsistent and accidental weekly blog post! Today we are going to tackle audio-related problems with sound and voice integration. The twist is that there will be no examples, not even one second of audio. Yeah, we know we should show you SOMETHING, but… next time. Or the time after that. See you in 2018, folks! (okay, that joke is not funny anymore)

No more stupid jokes or stretched smiles, it’s time for this text to roll! But first, here's a little reminder: the game is on the Steam Store and you can add it to your wishlist if you so desire!

Remind me - why do we need the Voice?

The initial demo was short, sweet and cute. Simple music, a few sounds and absolutely no narration. But then SOMEONE (not pointing any fingers) decided to make a trailer with a Voice Actor! “It’s gonna be funny!” he said, “Everybody’s gonna love it” he said. And now players are demanding the same Narration in the game even though actual implementation of this feature is going to take months of work. Just listen to our old trailer once again, and then we’ll explain why it’s so hard to implement:

We should write a blog about it

All of the problems and their solutions would take a lot of time to write about, that’s why right now we will start with a brief explanation and expand on it afterwards in some other blog post. That’s assuming we make it right…

What’s the fuss all about? The trailer is about a person getting angry on the player because of his/her actions. Now imagine the same person telling some important information regarding the plot of the game: “Hello, player, the answer to life, the universe and everything is…” – and then the player does something that should interrupt the voiceover. What should be the reaction?

Our current choice is to combine all of these tricks, depending on the level, phrase length, player actions, how important the line is, and so on. It’s a complex system, but so far it’s working. -ish.

For audio related stuff our composer suggested that we use FMOD and after weeks and weeks of denial, anger, bargaining and depression, the Stockholm syndrome eventually kicked in and we finally accepted it. Turns out, it’s quite a good tool, especially for setting and controlling voice lines with all the interrupts, transitions, additional sound effects and all the other things we can imagine. Here’s how it looks for one level:

Two tracks on the bottom contain Voice Lines and Sounds (blue regions) while all the messy marks and triggers on the top are for us to manage narrator reaction to player actions depending on the line or on what was done. Now you can imagine why it takes so long to add.

Taking the job away from the Voice Actor

Look, we have a microphone! 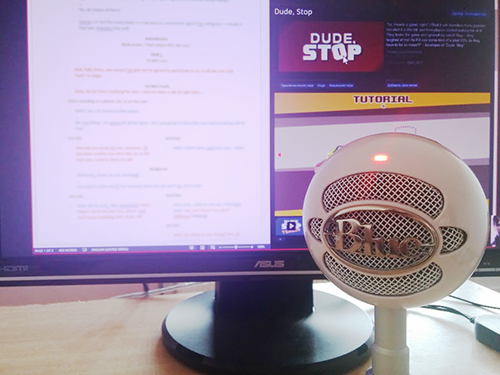 We decided it would be faster to record all the lines ourself, just so we have something for testing reasons. That's’ why the game is currently filled with screams with a weird accent and echo. That is also the reason we don’t have any voice samples for you. We know you’re eager to finally hear someone blabbering and cursing and screaming, etc., but we assure you – this temporary stuff is nothing to write home about. Just wait a little bit until the script is finished/approved and a Real Voice Actor starts doing his magic. B)

That’ll be all for this week. We’ll go back to work – screaming gibberish in the microphone, writing and rewriting the script five times a day, making weird noises with our armpits, crying ourselves to sleep every night, and promising that the game is actually Coming Soon…

Good work on trying to update more guys!
All jokes aside so excited.