Doom Exp 2.1 is a big update and a lot of things have been reworked. Weapon upgrade tokens (Power Nodes) are now used to install weapon upgrades, making the progression more dynamic since you will be able to grind towards your desired weapon upgrades. Power nodes will randomly drop from monsters, will be given with rank up's, can be bought in the buy menu or are given by getting a 100% on any level. 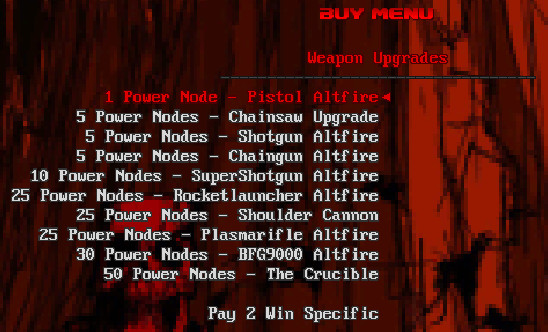 Power Up's are also handled differently than in the previous versions. The power up icons are now all listed on the left side of the HUD and are greyed out, indicating not active. Over the buy menu you will be able to exchange power up's for Xp. After buying one the assigned icon will light up and a timer will appear next to it, indicating how long the power up is active for.

A pay 2 win mode has been added. This will add an extra layer of difficulty to the game. In this mode no weapons will ever spawn. The only way to get weapons is through the Buy Menu - p2w specifics.

Health and Armor are less likely to spawn in maps. So utilizing glory kills, chainsaw alt fire and the buy menu are encouraged through this mode.

Changelog semi complete list from the 2.1 test versions on discord:

RIP & Tear ! Until It is DONE lml ! Great man . looking forward to stream Doom 2 on all episodes with the mod lml