Woot bots are in and one milestone of the development reached! Total of 8 airplanes are ingame now; 4 for both sides. Speaking of sides; development for teammatch is launched!

Development of Dogfight is going excellent and adding new features is going smoothly with no problems so far. This day is a special day for Dogfight as one of the biggest milestones before the public release is reached. Dogfight currently has total of 8 airplanes meaning both teams get 4 airplanes each. Next I will start texturing new skins for players to select ingame. 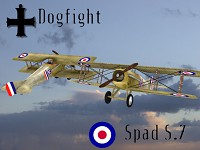 One of the France's most dangerous beasts in air. Spad S.7 was equipped with vickers machine gun and was used by many notable french aces. 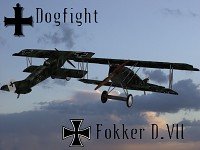 Finished up coding basic AI for Dogfight bots and I will continue to develop them to get those even smarter. It's been such fun to play with those so far and grabbing some excellent action scenes is now easier than ever. I also started coding teammatch gametype in and it's almost finished already.

Here is some action with bots. Decided to upload this because people were sceptical about the aerial combat being too hard. Hopefully this gives a better view. Please note that everything you see here is WIP material and may be changed.

Aww I love it, keep it up buddy.

can you blow up by debris because it looks like you dodge them.

this would be awesome if we could go into first person

Actually you can atm but you cant see the cockpit

This is what I call modding innovation. :) Gj

I love playing with bots!