New Moddb layout, pictures,music and MORE. Fun on a bun.

Oh hey again,it's Toadie here, bringing you up to date on For Hire. Sorry 'bout the delay on news and jazz since last time (thus deliberately lying to your face), but some awesome stuff has Transpired.
Obviously, as you can see, the ModDB page got nice new look,complete with more stuff to entice your violence-hole fetish.

First off, we've got some impressive new shots from Saxon from several maps.

As you can see, we're continuing our Forest/country night theme, at least for the first release of For Hire. Trust us though, you'll not be sick of it, and after R1, we promise it's going to get a lot more varied. We'll start talking about THAT stuff in more detail when the time comes though. 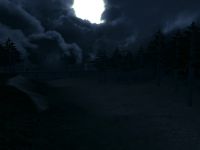 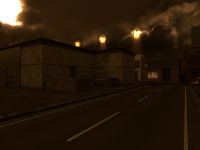 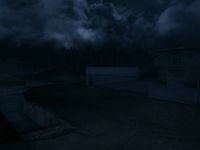 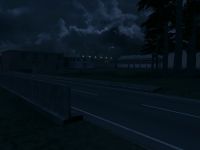 Secondly, Between Shadow Explorer,Saxon, Red Slug and myself, we've been filling out the character roster. The roster's covering literally every character, friendly enemy and neutral, and considering we're not making a clone army of Metrocops, expect to see a whole lot more on this front. 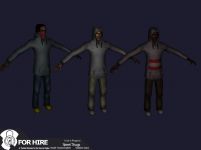 Thirdly, We've got a new programmer on board. Robert "Waffles" Walker, who's going to be running the programming in the absence of TechnoBlue, who's left to focus on his education.

Fourth, Rich Douglas has tipped his hat in to do some music scoring for us, you can catch some samples of his stuff in the Source mod "Curse" (check that out), and his portfolio site here Richdouglas.net


HELP WANTED
Lastly, we're putting out a BIG help wanted call. If you've got some interest in any of the below postions, we'd like to hear from you.

Character/NPC Riggers
We're looking for people with plenty of experience working with Valve's Skeletal animation system and facial system. Needs to be able to rig NPC and player models to the default Valve skeletons, assign vertex weights, arrange facial animation, and sort out physboxes. Prior examples of work for GMod/Other Source mods would be advantageous for application.

Skybox Artist
Have a knack for making seamless skyboxes? Have some unburned creative energy? Needs to be able to create a realistic night time skybox, without skybox creases.

Environmental Artist
We're looking to shunt out all the CSS and HL2 content as much as humanly possible, both textures and props. So we're looking for a dedicated artist who's got a good flair for creativity and the ability to create realistic Props and world textures. If either or both of those sound like you, drop us a line.

Character Artist
We're looking for both someone who can create good realistic-proportioned human characters. Ability to draw own concept art would be advantageous.

Voice Actors
Need to be 18+ and have a good mic. Americans, or people with strong "American" accents encouraged, as well and previous Voice Acting Experience

Programmers
For Hire is not a small project in programming, so we're looking for talented individuals who've got a background in C++ programming with some free time and willpower to help us and break down the task into more managable pieces. Looking for dedicated people to do a 3 month minimum tour working on this. Experience with Source Engine is advantageous, as is experience with databases (and implementing them via C++), and so is and graduate Comp Sci degree, or current students of the course.

If you've got what it takes, Drop a PM into Either SaxonSwine's or my own ModDB Profile.


I guess that's it for now, I'll drop some more stuff fro you guys sometime in the not too distant future,
In the meantime, stay frosty, we're Oscar Mike.