We have recently reworked our project decription. Imagine that you land in a world 20 years after chaotic and bloody events have swept across the entire continent in a wave of wars, crusades and unexplained murders. You are a pivot in the middle of the conflict between the descendants of the world's first makers!

Imagine that you land in a world 20 years after chaotic and bloody events have swept across the entire continent in a wave of wars, crusades and unexplained murders. You are a pivot in the middle of the conflict between the descendants of the world's first makers.

You can take one of the sides, join a guild, family or order and in their name retake sacred grounds that other families are trying to claim. You can join with your friends and follow the trail of missing artifacts surrounded by legends. You can delve into the mysteries of unnerving events, learn the history and take possession of the wisdom and glory it holds.

Beware though, for your every step will be watched by enemies who will lie in wait for a your moment of weakness. When the time is right for them, they shall take away what is dearest to you. 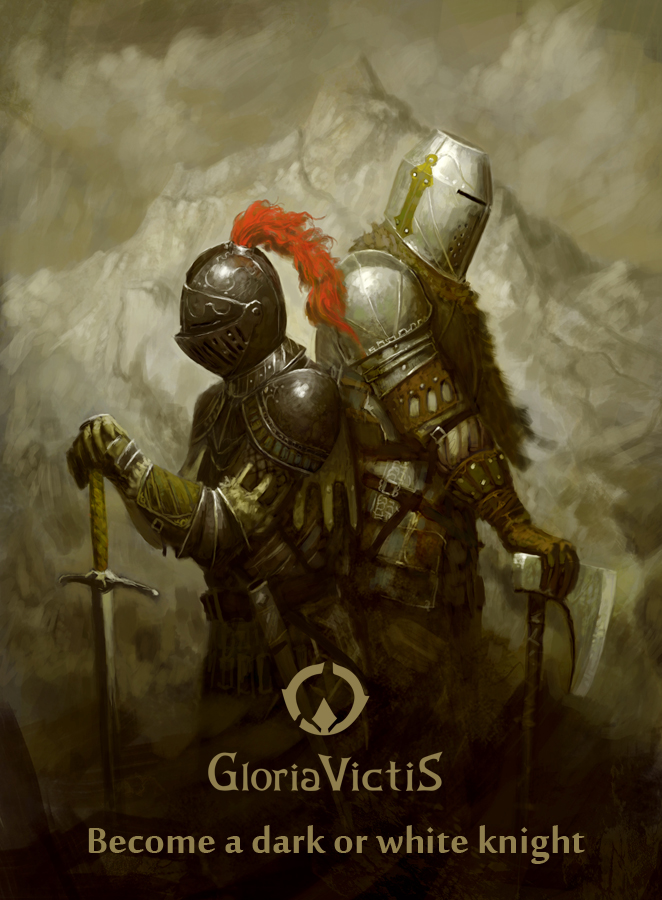 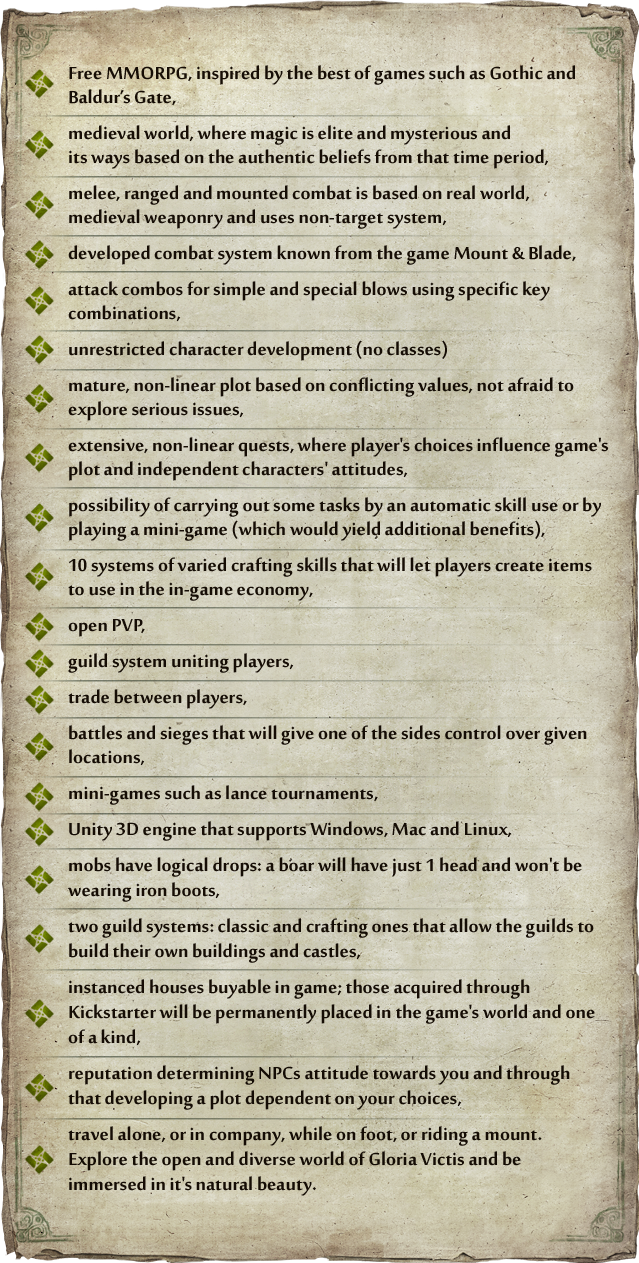 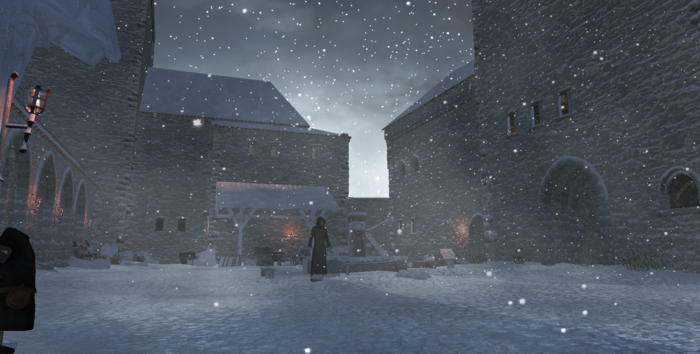 Crafting in Gloria Victis is divided into 10 crafts and player will be able to use only two of them simultaneously. This limit is introduced to stimulate trading among craftsmen and encourage them to join craftsmanship guilds.What benefits you will gain after joining craftsmanship guild ?

First, you will establish and maintain relations with people, whose craft items of the same category. Together, they can perform “crafting” tasks and gain achievements that will influence on crafting skills of craftsmanship guild's members as well as enable them to build instantiated abodes, where highest quality items can be manufactured.

Our game strongly involves the aspect of equipment manufacturing, thus we have decided to incorporate innovative solutions that are less popular in other MMO games, however in this way we came across players' demands.

Second, all items that players are able to acquire during playing Gloria Victis will be dependent on enemy, which you will be fighting against. For example, if you will kill boar, don't expect to find armor that he could swallow before, rather expect of learning the skill how to skin boar and craft the armor yourself.

Third, we emphasize realism in Gloria Victis therefore we contact and consult people whose every-day profession is the same or similar to equivalents in our game.

We want to imitate as close as possible the process of items' manufacturing to make player familiar with medieval times, however to give players some entertainment, each stage of crafting is extended by mini-games.

As the example, I'd like to tell you about one of item included in food crafting, in detail in fermentation process. I want to familiarize you with brewing.

The beer, as you probably know, is the product of fermentation of malt mixture (most often barley), water, hop and yeast. Hmm, for sure ?

In Medieval Ages, the worst kind of the beer was a product without any addition of hop as well as yeast wasn't used at all.

If this is true, how was it obtained from ? This knowledge will be revealed to you in our game.

The player, who choose to be food specialist and is eager to manufacture beer, should visit each of three buildings located in major town, sometimes in the vicinity of cloisters or build them in cooperation with other guild's or craftsmanship’s members.

What we mention above is malt-house, mill and brewery. It'd be also nice to get some grain or sow grain fields next to owned house.

In the malt-house, the player will have to:
- soak seeds in the tubs
- fish the grain out and spread it on the threshing floor to make it sprout; player can speed up this process by putting heated stones between the seeds.
- next by shuffling and raking player will separate the sprouts from seeds and put malt up for drying. The drying itself will go much faster if we invest in a drying room.
- dried malt has to be then transported to the crushing mill, where it will be bruised.
In the brewery the malt will be soaked in water and left for a period of time for the valuable components could deeply penetrate in. We can speed up this process by equipping our brewery with a furnace that will heat up the tubs. This process is called mashing.
Then we pour everything to be filtered in grain bed itself in a process called lautering. On the canvas working as a filter appears malt that can be used to create a low quality beer such as home brew.
Now we have a high quality wort (they differ depending on the grain used) and a low quality wort.
We can pour both worts to fermentation tubs and get a low quality beer or add quality hop to the better wort along other ingredients to try and create a true masterpiece.
We cannot forget about buying or acquiring residue from a previously made beer. It contains yeast that will allow the fermentation to begin.
After the process is over, we can fill the barrels with beer and sell it to other players, inns or drink it ourselves to gain temporary attribute bonuses.

Black Eye Games is an Indie studio that unites over 30 experienced developers.
Some of us were a part of the teams that brought you 'The Witcher' or 'Neverwinter Nights'.
Among us there are also team members who are working as Software Engineers in huge corporations such as Motorola Solutions Poland.
Our team has been working together for over half of a year and the years-long experience we've gathered allows us to persistently move towards our goal, a completed Gloria Victis.

Black Eye Games is an innovative team of developers skilled in the many areas of computer game development. Our team is completely filled out with 3D artists, animators, 2D concept artists, level designers, programmers, scripters, sound engineers and security specialists, amongst many others.

We work closely with medieval enthusiasts and knight brotherhoods to offer you the souvenirs on this page; which are crafted in a medieval smithy using the same techniques that were used in ages past.