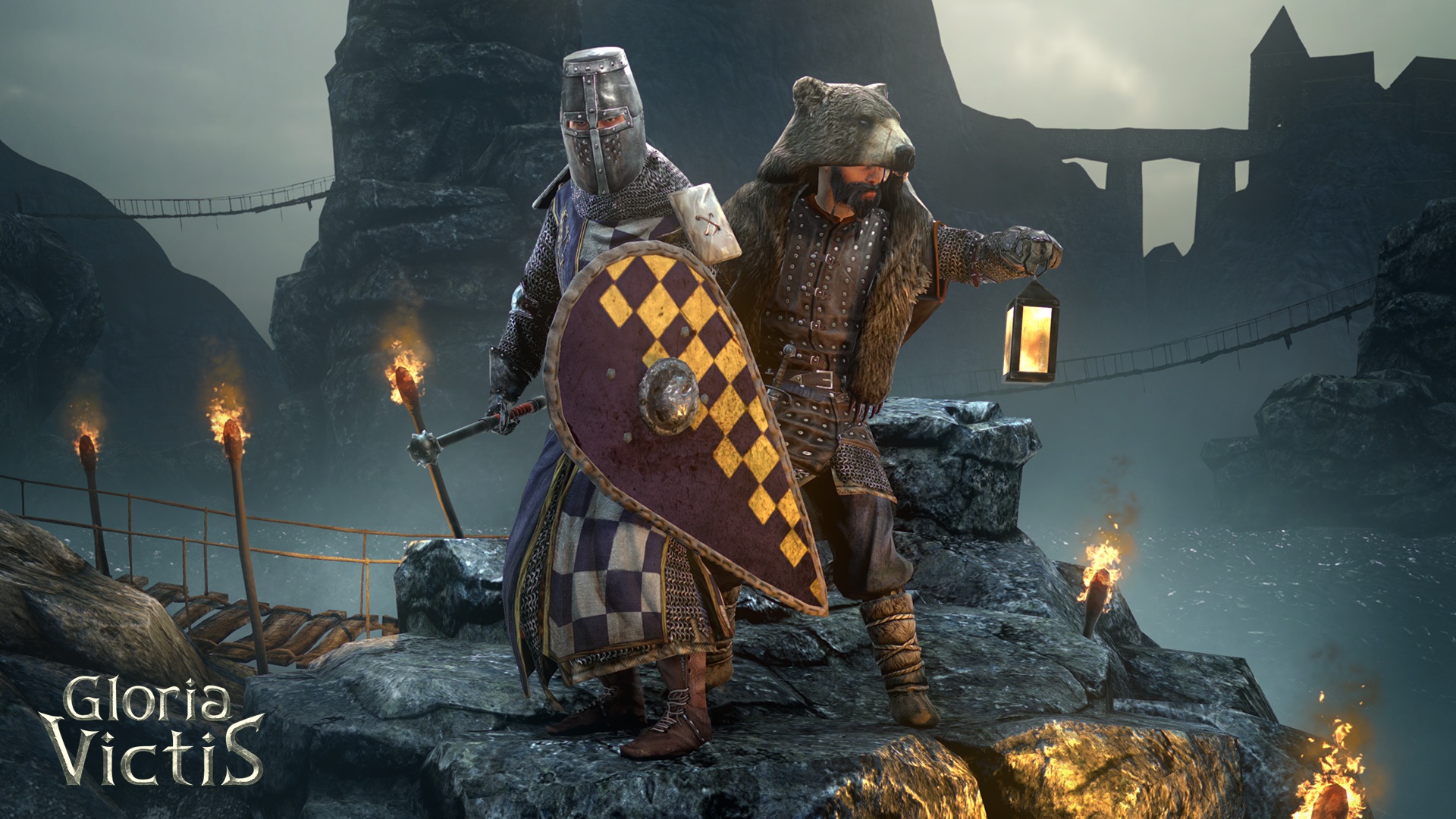 Choose one of two nations: proud Midlanders inhabiting vast green lands or vengeful Ismirs from the frosty North and join the conflict!

Get Gloria Victis on Steam and play now!

Non-Target Combat – Engage in action-based, non-target combat where your skills and tactics matter! Prove your skills and earn fame as an undefeatable duelist, eagle-eyed archer or respected commander inspiring your allies in battle!
Open PVP – Fight to the death in tournaments, towns and castles sieges and epic wars where entire armies collide!
Territory Control – Conquer the lands, siege non-instantiated towns and castles and develop fortifications to earn an advantage in the everlasting conflict of the realms!
Innovative Partial Loot System – Defeated your enemy? Take your reward, selecting which specific items you would like to loot – but hurry, the clock is ticking!
Fame and Disgrace – Be a part of a living feudal society, establish your reputation and move up the feudal hierarchy, leading your allies to victory under your guild’s banner – or run and hide as an outlaw!
Complex Crafting System – Look for the best resources and materials, use crafting workstations and co-operate with others to increase your efficiency and achieve mastery in one of 8 different realistic crafts. The economy is in your hands – swords don’t drop from wolves but are forged by the blacksmiths!
Class-less Progression – Become who you want to be, shaping your character without artificial classes and fully customizing your equipment using hundreds of available items!
Open Living World – Seamless, breathtaking, challenging, dynamically reacting to your actions – the diversified and overwhelming world of Gloria Victis awaits you!
Low-fantasy Setting – Explore the lands based upon medieval Europe and Middle-East, discover ancient secrets, seek for forgotten treasures and face creatures designed after medieval tales!

Please remember that the game is currently in alpha stage and you may experience some issues or some of the features may not be implemented yet. Read the "Early Access" section above for details!
We are continuously improving and expanding all the described features according to the Community voice, while the others are under development or on our to-do list.

Features which will come with the future updates:

Mounts – Tired of walking? Get on a horse, take your lance and charge the enemy – or prove your incomparable skills in mounted archery!
Full-scale Sieges – Rams, ballistae, trebuchets and catapults – medieval warfare in all its beauty and glory!
Sailing and Naval Combat – Build a cog to deliver goods to distant realms, lead your fleet in naval warfare or make your mark as a world-known corsair!
Housing – Build your own house, develop and decorate it – home sweet home!
Freedom and Immersion – Want to rest for a while? Enjoy numerous side-activities, such as fishing, gambling and the beer drinking contest!
Mature storyline – Choose one of three playable nations based upon the old powers from medieval Europe and the Middle-East – Midlanders, Ismirs and Azebs – and enjoy an epic adventure to discover their rich culture, history and an own beliefs system!

Check our official website for more info about Gloria Victis!

We are proud to announce that we have just revealed a brand new gameplay trailer which has been co-created with our Community, using the players’ gameplay footage. We hope you’ll love it as much as we do!

Moreover, we’ve been able to apply huge amount of updates and improvements over the last few weeks, so we would like to present a summary of the biggest recent changes:

Players can now wage war with much more smooth and responsible controller, so in effect the battles are now even more skill-based and immersive. Also, this particular update has added the First-Person view as well! 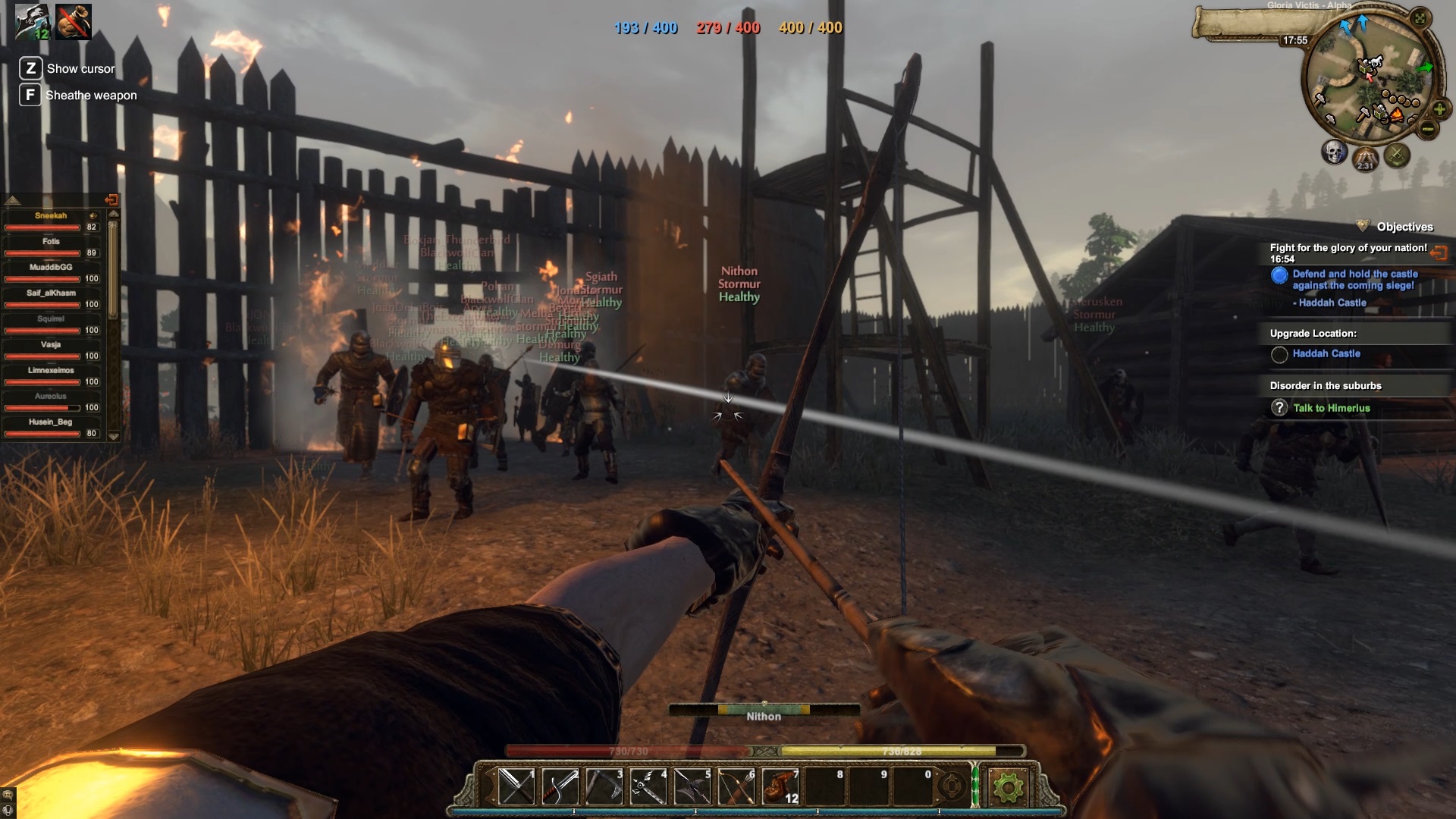 The territory control formula has been improved with the updated individual players’ ranking. Since the update, the main focus is put on the player’s activity and their contribution towards their nation in the open world PvP. Even if outnumbered by the overwhelming enemy forces, players can still gain fame for holding their ground and take their place among the legendary heroes and warlords whose names are carved in stone. 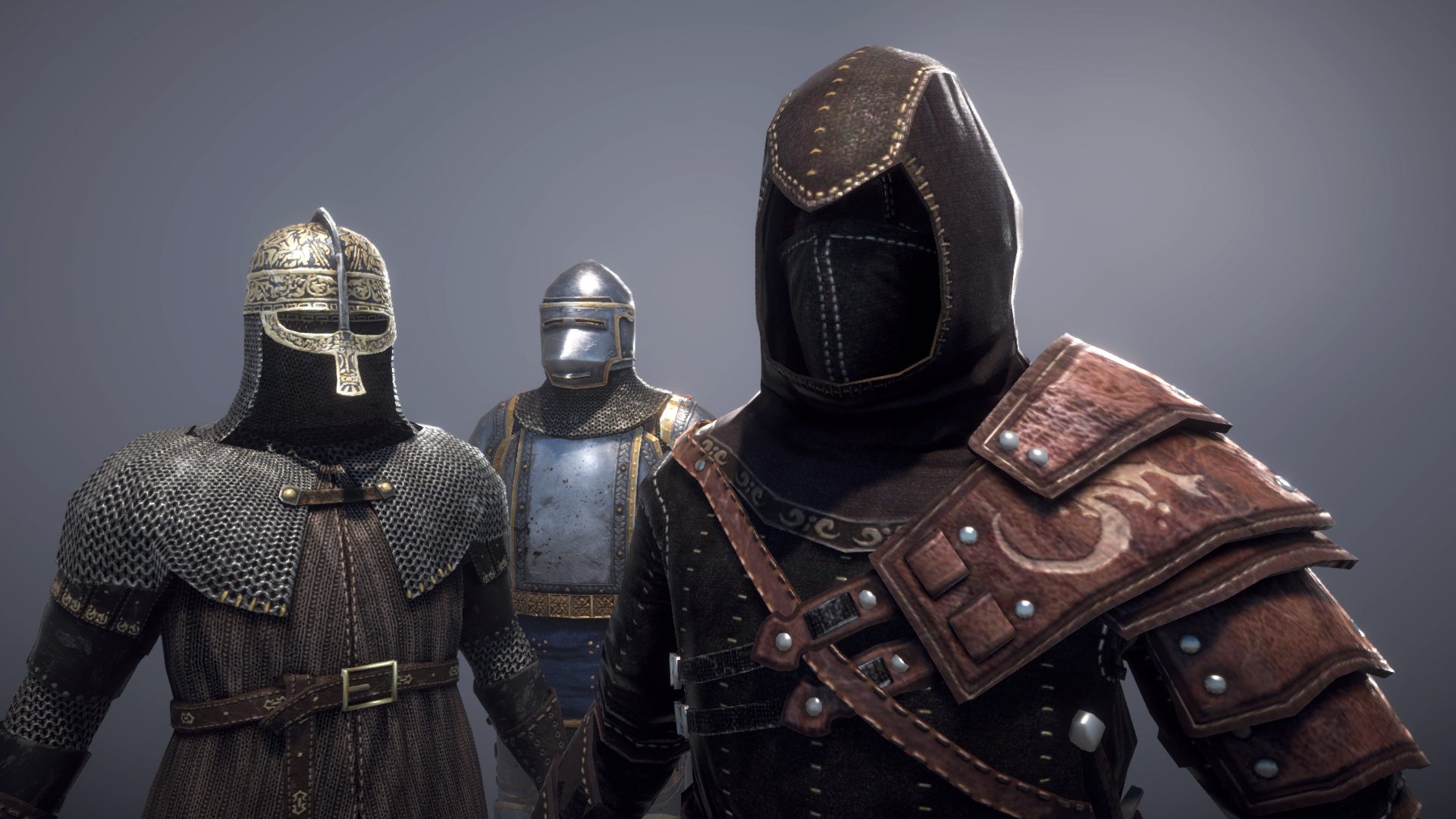 The abilities update introduced numerous changes and improvements. First of all, from now on they are grouped in a skill tree where each subsequent ability can be unlocked by investing progress points in the preceding ability. There are also triggers – abilities which initiate special actions after completing specified requirements, i.e. successfully landing 5 headshots in given time will be rewarded with a buff, and we have added 19 new abilities. In effect, players have now much more options to customize their characters and get their perfect builds. 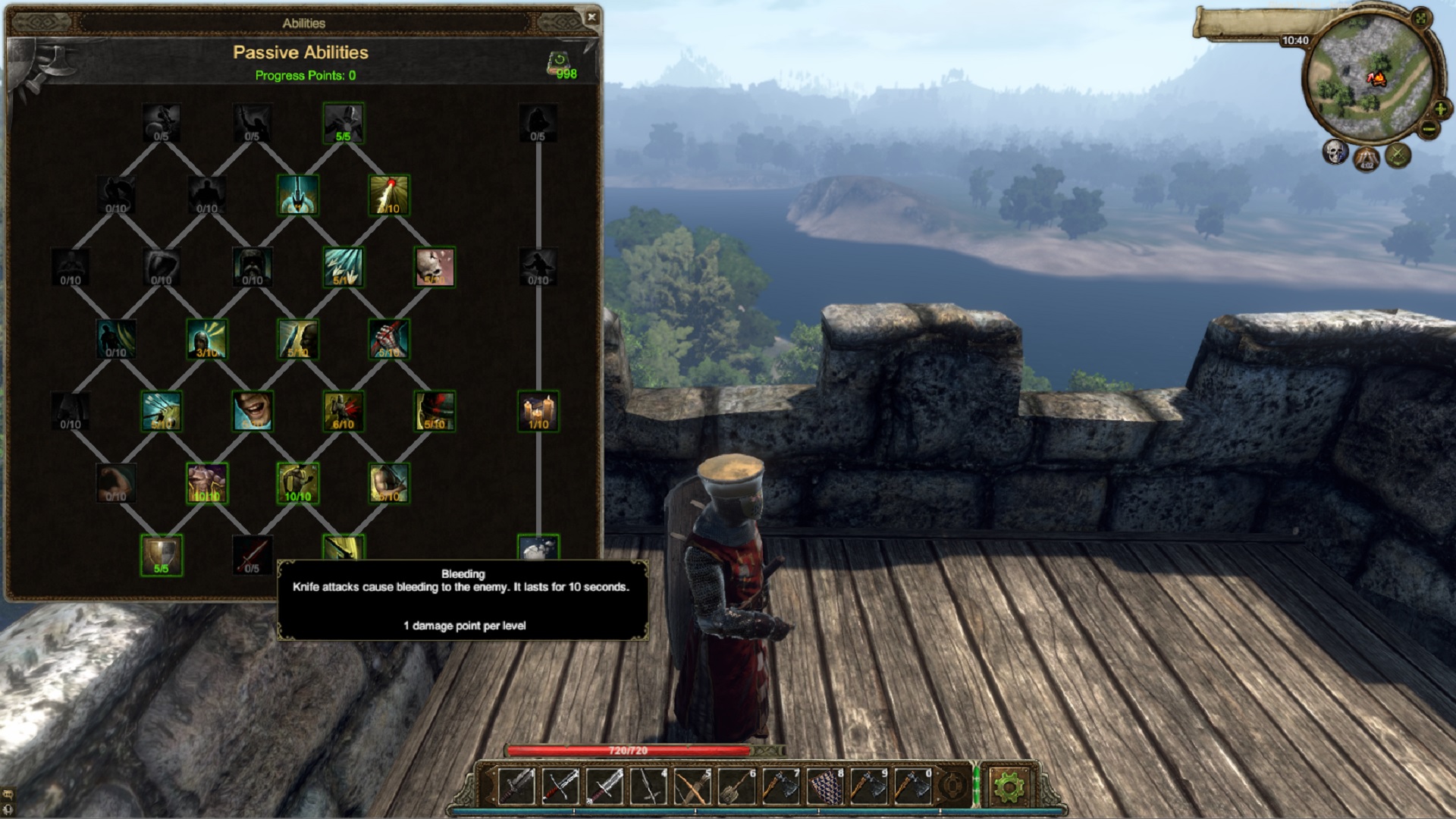 New face of the Azebian nation 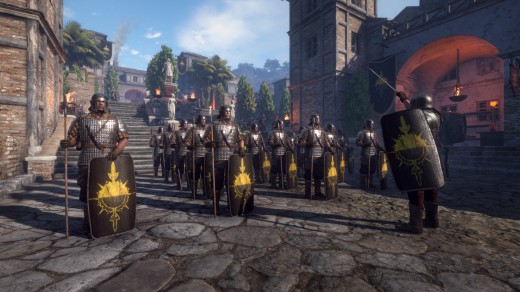 Azebs, nomadic people inhabiting vast deserts, have united with Sangmarians and countless other tribes under the banner of the Sangmar Empire. The updated faction, one of 3 available, has been designed after the Byzantine Empire, with visible Roman inspirations. It comes with a brand new breathtaking capital city of Baalhammon, new questlines and unique equipment models.

See you in battle!

In one of the latest updates we have introduced the very first guild-controlled location – Skergard Castle which is placed atop of an impressive snowy...

The Azebian Empire is here!

The Azebian Empire is finally here!This new playable nation comes with their very own city and questlines. Of course, there are also new areas to see...

The Combat Update is Live - Watch the Trailer!

It is a pleasure for Black Eye Games to announce that the long-awaited Gloria Victis combat update is finally live! Watch the latest Combat Trailer and...

50 updates deployed in less than a year!

9 months ago Gloria Victis came to Steam Early Access. Over these 9 months we were able to deploy 50 regular updates and likely 3 times more smaller fixes...

This game looks epic! how did i not see this before now! Just one question can you get NPC guards/soldiers?

Obviously not 100's of men since that would be too much if everyone had that. But more like 2-10 men and obviously only when you've achieved quite something, not just a random peasent ^^

Do you guys plan on adding VOIP at any point?