Hi, ModDB! Today, we glad to show you our mod more... detailed, than screenshot with short comment can provide. First, we want to tell you about our weapons.

Our mod is tying to not step aside too far from HL universe, so, some of our weapons are created by Combine, and others – were manufactured before The Incident. So, all non-combine weapons are simple, and not too exotic. Whole arsenal was changed and enlarged, but in fact, player dont need to carry every weapon on his back. Weapon system was changed to carry only 2-3 weapons in one time, as in Halo and FEAR games. For me, in HL2 number of weapons is too small... Guns are not interchangeable, cannot be used for special situations (except RPG, of course). When you find shotgun and AR2 – no one can stop you, then... It's sad.

9'mm pistol. Originally, it was known as H&K USP. Nice gun, with cool design, but we want something new. So, Walter P99 was chosen, as a equivalent. All characteristics were saved. 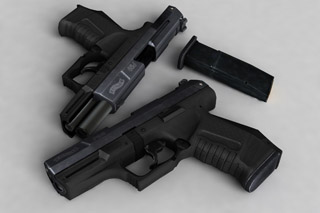 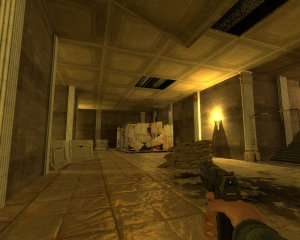 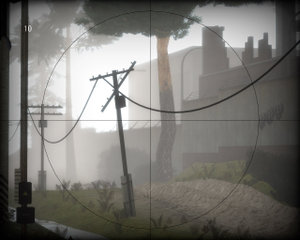 Magnum. It was changed to Desert Eagle It is very uncommon weapon, and it is totally not a fighting weapon (despite public opinion, formed by action films and games), so cartriges for it will be seriously hard to find. The only place, where player can take this gun – is a hideout of the one of the rebel commanders, in City-12. Player must highly appreciate each cartridge, because power of this gun is overwhelming(much more than Magnum have + ability to punch out a concrete/brick/wood/plaster wall 8 units of thickness (and 16 units maximum, with damage penalty. Other weapons have this penalty for 4-8 units), or 3 units of thickness for metal, with damage penalty).

SMG – stay unchanged, visually. Maybe, later, it will be remodelled, to something new. But it's not necessary for now. But technically, this weapon have changed, to be more realistic and useful. Originally, distance to target affect only on chance to strike the target. But now, distance affects the power of the bullet. This kind of weapon was created to use in close combat, in cramped interior. So, in close combat, SMG turns to hellish chainsaw. With added ricochet ability, a small room, or hall will be totally devastated by this lead storm.

Pulse rifle, AR2 – staying unchanged. But its power was slightly reduced, to compensate absense of recoil. And, absolutely new weapon – assault rifle AK-74. You have already seen this gun, in our gallery. But, technologies are not staying still, and requires much more details. Old model was made at early stage of our experience, made with lack of details, some technical and design mistakes. New one – is our attempt to meet your expectations. New model have wood elements, instead of plastic. Wood looks much more interesting, and this is a well-known symbol. Also, the scope sight was totally remade, to be more realistic. This scope is specially designed for this type of assault rifles, but not too common.

AK-74 has two modes of fire – automatic, and single shot, using scope. In automatic mode, recoil is very strong. You need to shoot 3-4 bullets per round. Like in real life. Even a highly trained professional cannot hold this monster targeted, to shoot 10 bullets per round. But in single mode, recoil doesn't bring serious problems, and this fact makes AK-74 to be a best weapon to shoot from hideouts and ambushes.

As cold arms, we have a knife – maybe not so powerful as crowbar, but very handle for silent operations. In first chapters, we would have only a knife, and shadows to hunt down the enemy.

Nearest plans for weapons – are two sniper rifles, with different properties. One was made by Combine, and the other – is a good old VAL, with some extensions(aiming computer, and nightvision). It is not that VAL, which Russian special forces using, and not that VAL, which you can find in Stalker. This weapon is an hi-tech, experimental model, which you can see in game “Chaser”. Or, in Tula's armory museum.

Shotgun is staying without any changes. For a long time we've searched an adequate variant for shotgun. And, finally, decided, that good old SPAS-12 is a best choice in this type of weapon.

Grenades – first, we delete this stupid red lights and squeaks. And next move – will be more powerful frag grenades, and single-shot powerball generators. Just throw one – and it will be turned to powerball, flying fast to the first _destructable_ object. When it reach this object – it explodes. Otherwise – bounces out from the wall, or other udestructable surface.

Also, we have some thoughts about combine weapons, but for now, I don't want, to lay all cards on a table. And make far promises. So, that's all for now. Wait patiently, and we will return with some another news... Next, I want to tell you about monsters. And other hostiles.

Thanks to Flagg_ and KLIMaka, our lead modeller and coder, for all of those weapons.

So far so good, keep up the great work bro.:D

Only a knife, to hunt down enemies? Quite ramboesque. You'll have to implement some stealth element to make this work...

OMGOMGOMG ricochet ability for the SMG? *drools*
Though, at some extent, all those combine soldiers will die of friendly fire.

And, your maps look nice.

yeah :D Thanks.
Of course, stealth AI and gameplay extensions are already up, some part of them. Very raw, but working.

Superb textures and models. Blown away by them. Nice work on the maps as well... watching...

Awesome work love the models. Looks like another insurgency :P but great work.

Eh, recoil in automatic fire is greatly over portrayed by the media and video games. In reality, once you have your berrings no weapon is too difficult to control.

orly? I see, you never hold AK in your hands? Of course, you can't... But, maybe you can shoot from M4, if you goes to army. M4 is much more gentle weapon, but shoot more than 5 bullets per round simply... useless.

Also the Makarov would be a googleplex times more common in russia than a walther P99. Just fyi.

Looks grand so far and good luck down the road.

Wow, at least two of these weapons are stolen. The Desert Eagle is Vashts1985's model with my textures (with the difference you guys ******* RUINED my work, thanks.) and the P99 looks a lot like Afterburner's & !NC!Furious's.

This weapons are real ones, so anybody can do the same model.

We don't want to proof something. Let this charge be on your own conscience.

Maybe you are a troll. So empty word doesn't interest us.

As you can probably tell, it's not totally the same because your texture artist ruined the thing and changed other things like the grip. Still, most of it my work + the model is exactly the same - you should remove it ASAP.

If you STILL want further proof I can post the texture flats and if the UV layout matches yours then you will know for sure that your artist stole it since I can't possibly have textured the same model (not to mention the fact I textured this thing before your mod was even announced!)

I don't like your style of speech.
What is your polycount?
Do you have hi-poly model, to extract normal maps?
How many materials do you use on this model?

I see, that texture is COMPLITELY distinct.
Mesh, visually is distinct too, in that way, how can be different images of the SAME real object.

I can bring to you our materials, screenshot of the mesh with polycount. But only after you show me the same.

Apparently you still refuse to face the truth so here you go:

Compare that map to your model's slide map - as I said the layout will be the same and if it is then it's the same model. As much as it is the same weapon, you can't have two pixel by pixel overlapping UVmaps without it being the same model.

AND the last and probably the most important piece of proof:

This part here doesn't exist on the real Desert Eagle - Vashts1985 made it up. It's on yours too, which means it's his model.

hmmm... Now i see... It's very strange. I need to wait Flagg, our modeller - he has all sources.
For now, i can show only uvw layout. It's strange, but they looks same...
Pics.livejournal.com

He is very experienced 3d artist, i've watched all stages of development of all characters and many other our models. He wrote some tutorials, based on our characters, with all stages - from scrath to hi-poly sculpting. You can google it - Google.com It's in russian, but there is over 800 links to his tutor. ****, parser destroed the link... ******* russian simbols...
Its very, very strange, and need more detailed investigation.

You can see the rest of the textures here for further proof if you have the .vtf plugin for Photoshop or GIMP or whatever imaging program you use:

Looks like he took Vash's model, edited the UV layout a bit (for the most part kept the original one), tweaked my textures and rendered some extra reflections into the texture from 3ds Max.

ok, i'll talk to him.
It's very... unexpectedly to see something like this from the one, who can do much more quality model. Is it laziness?
He is my teacher in all modellng stages, and i trust him... It's a surprize, huh.

****! Parser destroed the link. Here some results - Subscribe.ru
and Mirknig.com
and screenshot - Pics.livejournal.com
It's in russian, but there is over 800 links to his tutor.

Oh and sorry about acting like an *** about this, it's just really annoying to have your work stolen for the millionth time D:

I understand.
This weapon will be remodelled, anyway, after all of this strangeness would be investigated.