A short discussion on finite-state machines, menu's and of course... the voices in your head. Just a day in the life of the MASOCHISIA development.

I am not a programmer.

I can do many things in life, but I’m not "very good" at any of them. You could debate I’m not even “good” at any of them. But one tool that I have found that makes my life a bit easier is FSM’s. Or “finite-state machines”.

For those unfamiliar-- at the most basic level, a FSM allows a non-programmer like me to be able to create fairly complex systems without having to physically code it. At a more technical level, a FSM is a computational model that uses sequential logic circuits that are built using one of a finite number of states. It fires off one state at a time, traditionally initiated by a trigger of some sort. Basically, think of it as a circuit board of triggers.

An important part of what I need in Masochisia, is some sort of system to track progression of the player. This system would need to update as various events occurred throughout the game. This progress could not only save a players progress but could also allow for new areas to be explored, new dialogue options to be available, new items to become available etc if “X” has occurred. So this system is really multifaceted in it’s requirements.

Below is the first pass at this “Progression System” using a finite-state machine: 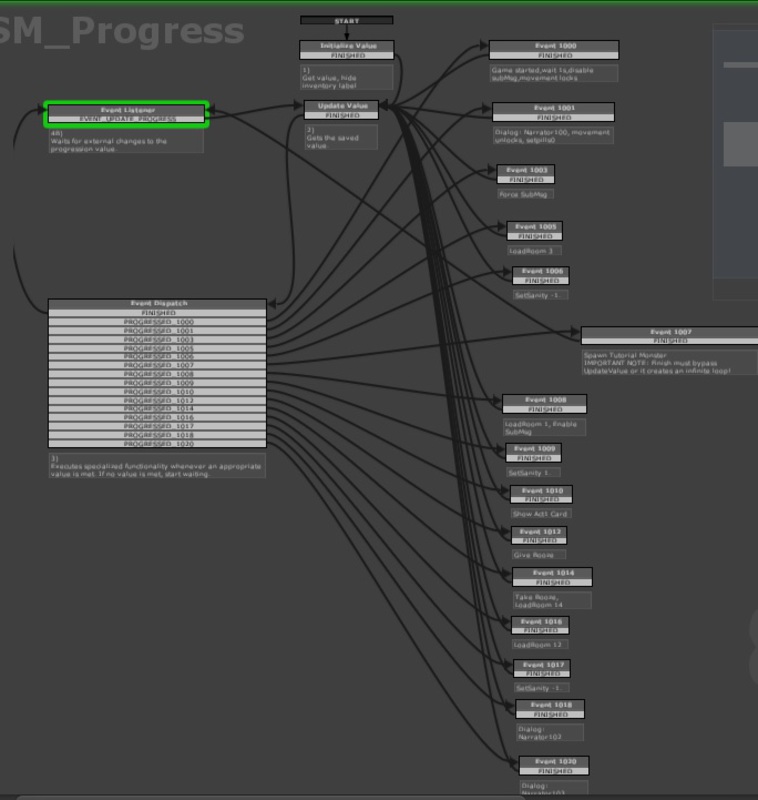 I've also implemented a WIP Menu system. A fully-functioning menu with basic options & controls/keybinding. The icons, cursor and all that are placeholder. Not sure on the background, but I thought it was a cool scene so its what's there currently. Important thing is that the menu is there, can spruce it up as we go...

See it in action below:

A lot of parts of this game have evolved over the last 2.5 months. One aspect that has evolved dramatically is the role of a NARRATOR:

● Initially, I was planning on bringing in a voice actor to be the "Narrator". In a later reveal, you would discover the narrator is actually you, but from a different time in your life. I've used voice actors in other games, and a great actor can really add a lot to a project. But (1.) I wasn't sold on this idea. (2.) The game was moving more towards being "text heavy" (3.) Everyone would need to be voiced in the Narrator was (4.) Concerns over if the voice actor would be comfortable actually saying the shit he would need to (5.) Budgetary concerns.

● Because of these concerns, the narration evolved to a "Conscience System" which would be a text-based system where the player would be questioned by their conscience. I don't think this was a bad idea, but this quickly evolved to another iteration.

● Hearing voices is a key part of this story. It would make sense that you should actually "hear" the voices in your head in the game. Even if its a text-based game with no actual voice. The challenge being, how would you differentiate normal dialogue with characters verses voices in your head? I decided to add some effects to the text to increase the feeling of "insanity" and also blurred up the background to attempt and recreate the "fog" that is often associated with hearing voices and losing sight of everything else...

Personally, it's a bit hard on the eyes-- but I don't know that this is a bad thing. Just how comfortable are you when you're hearing voices in your head? In my experience, not very.