Just an update about this game, some ideas, and a little bit about the development.

I'm writing this post as a basic forerunner for the game. I want to lay out a couple of different ideas on what I want to do with it, and lay out a little more information on just what the game is.

Napixelonic Warfare : Europe In Flames is a pixelated real time strategy based in the era of Napoleon, dates ranging from 1804-1812. As of now it is a battle simulation, requiring players to have a little more interaction with the game play than in other titles.

Per my vision, I want to develop a game that will capture both the realistic nature of warfare, with drummers, flags, the pounding of artillery, the earth-shattering noise of horsemen and the constant advance of lined infantry.

As a product of the NES and SNES generation, most of my childhood was spent playing those games which contained real depth and difficulty - and managed to capture the imagination of the player without the appeal of high quality graphics. Having said that, I have decided on a graphical style reminiscent of those times. Characters in the game (as of now) are 32x32 - I'm still able to define a bit of detail and separate the various factions from each other. 16x16 was simply too low of a resolution to develop the game with. 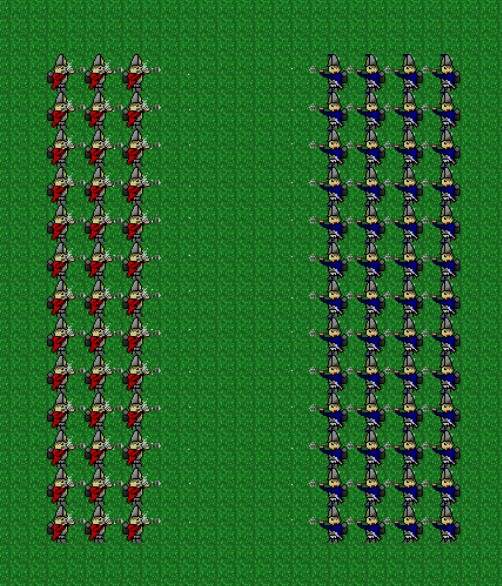 Demonstration of some very very very basic AI. (Firing on the player, France.)

As to the game itself, I am developing a regiment system for the gameplay. On launch, players will pick their nation, number of regiments, and be off (the regiment system will cap at 9 for now.) Each regiment will contain some troops, a drummer, flag bearer, and officer - i.e. the player.

Bullet flight is realistic (as I can manage) to speak to the smoothbore muskets of the time. This can be adjusted for light infantry with rifles, such as the Austrian Jaeger, or the British 95th. Bullets, as of now, will assume slight deviations on firing, and drop to the ground after a distance.

Players will be able to switch between regiments and order their troops over the field. I've developed a basic system of orders based off of four commands - Make Ready, Take Aim, Fire, and Reload.

I am still quite an amateur at most aspects of game development, and can only ask the patience of viewers while this game is developed.

Oh, and the background image in most of the images - the grassy tile? Is just a placeholder til I put the work into something for in game. :)

Having said that, please feel free to leave your comments and suggestions in the posts below. Thanks! :)