Champions! Today we’re coming with another Development Update for you. Why did we decide to make Alaloth an isometric game with 3D mechanics? How did we bring this fantasy world to life? Read the article to find out. 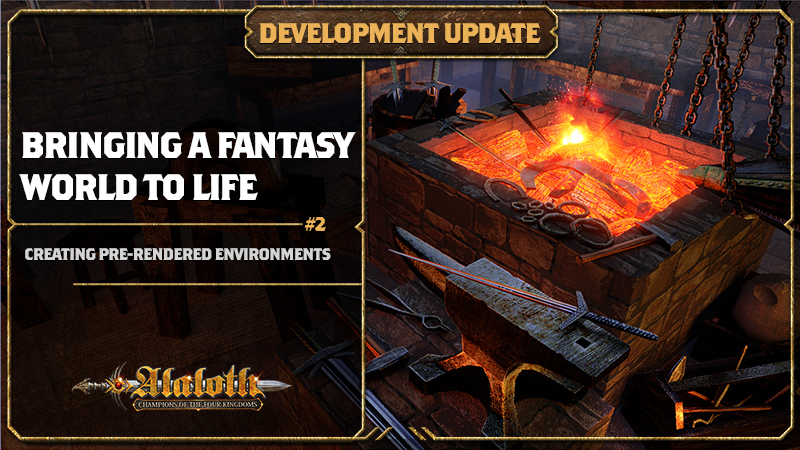 When we started Alaloth’s pre-production back in 2017, we knew we wanted to make a full 3D game. The original prototype was very cool in the end and we caught the attention of a few outlets by showing it behind closed doors at different events. In the end, we decided to announce the game early on in its timeline because we had the chance to be featured by IGN on its whole network.

That meant millions of viewers and it was the best way to get the ball rolling! Anyway, while thinking about the pros and cons of the plan we had in mind, and still busy with pre-production, we decided to change direction. Environments make up most of what you see in the screen of a game and in their complexity, they are among the most difficult things for a computer to render. To look as visually appealing as possible while still being able to run on almost all platforms, we decided Alaloth should use pre-rendered environments. Moving on using fully pre-rendered environments completely changed our work pipeline but at that time, our thought was that pushing on the art department would have been much easier than stressing coders, in a moment when we were still on the hunt for talents able to push Unity to its limits and still working on our tools. It ended up being a wise choice that allowed us to work on our idea of creating a hybrid game that was in-between a classic RPG and a modern action game, bringing 3D mechanics to an iso-view. Challenging. Unique.

Working with pre-rendered environments allows for a much faster workflow and less of a burden on our computers, with the only downside that scenes cannot be rotated while playing. Depending on the kind of scene, if combat or non-combat, we start from a concept, outlining the key parts of the experience we want to offer. For cities, the focus is almost only on the visuals, while dealing with a fighting area brings a totally different scope to the level design. No matter what scene we’re working on, the first step after the concept stage is measuring its size. It would be really bad to have extremely different sizes inside the same area family, so we essentially measure two kinds of values: the minimum distance a player will travel to reach the edge of an area and the one he needs to walk to roughly reach every spot in the area. Each kind of area, be it a city, fighting area, or anything else, is enclosed in a range of sizes that can’t be broken. 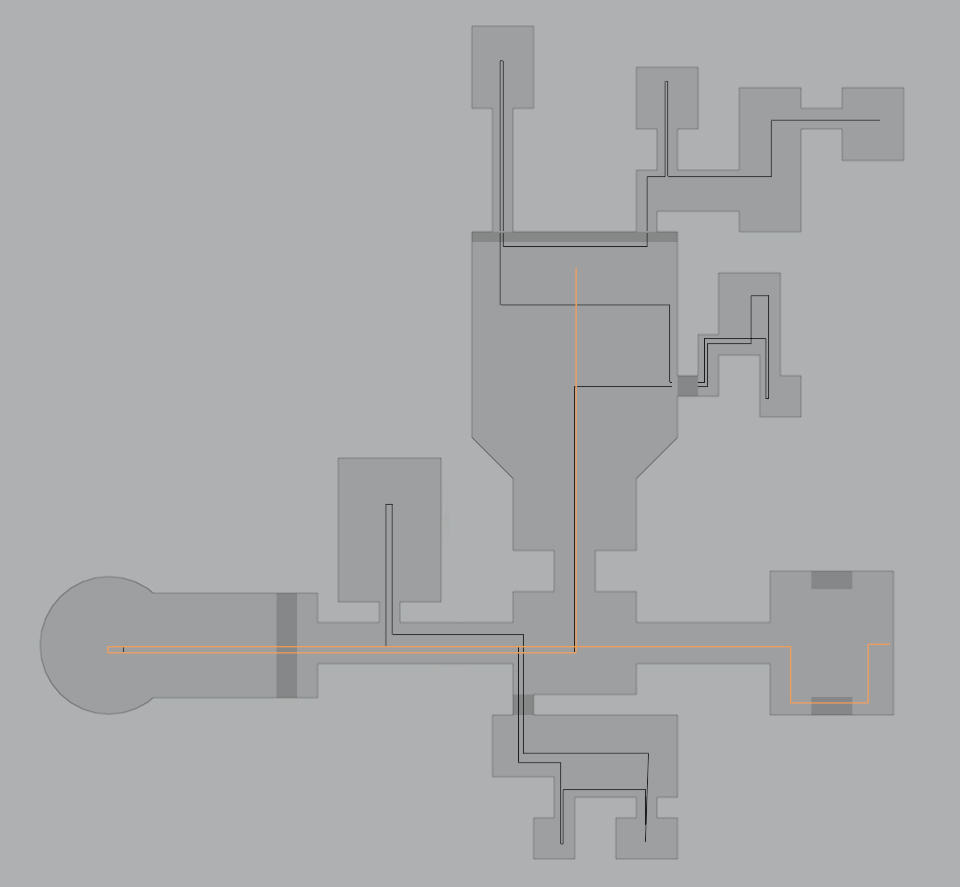 At this stage, multiple professionals work together to reach the right balance of performance, visual appeal and design elements. When all the sizes are set and the walkable blockout has been created, the Environment Artist, together with a designer, starts building the scene. 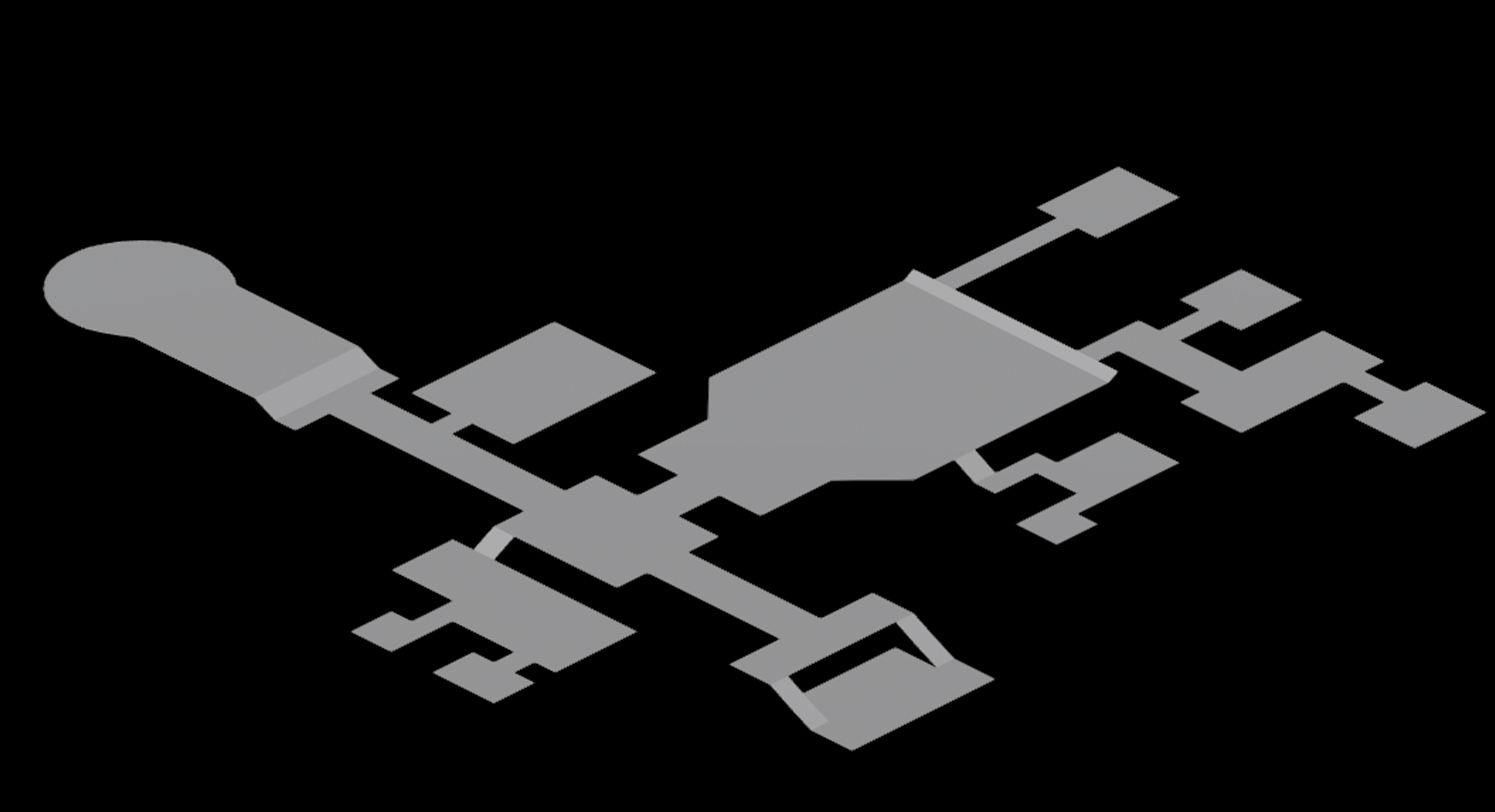 While for non-combat areas the process is more or less straight forward, for fighting scenes, we have to keep an eye on combat flow. Multiple design elements can be used to enhance a user’s experience and let the player interact with environments instead of just walking through them. However, these design mechanics are condensed in advanced stages, since we wanted to keep early scenes simpler and gradually add more challenges the farther a player goes on their journey. 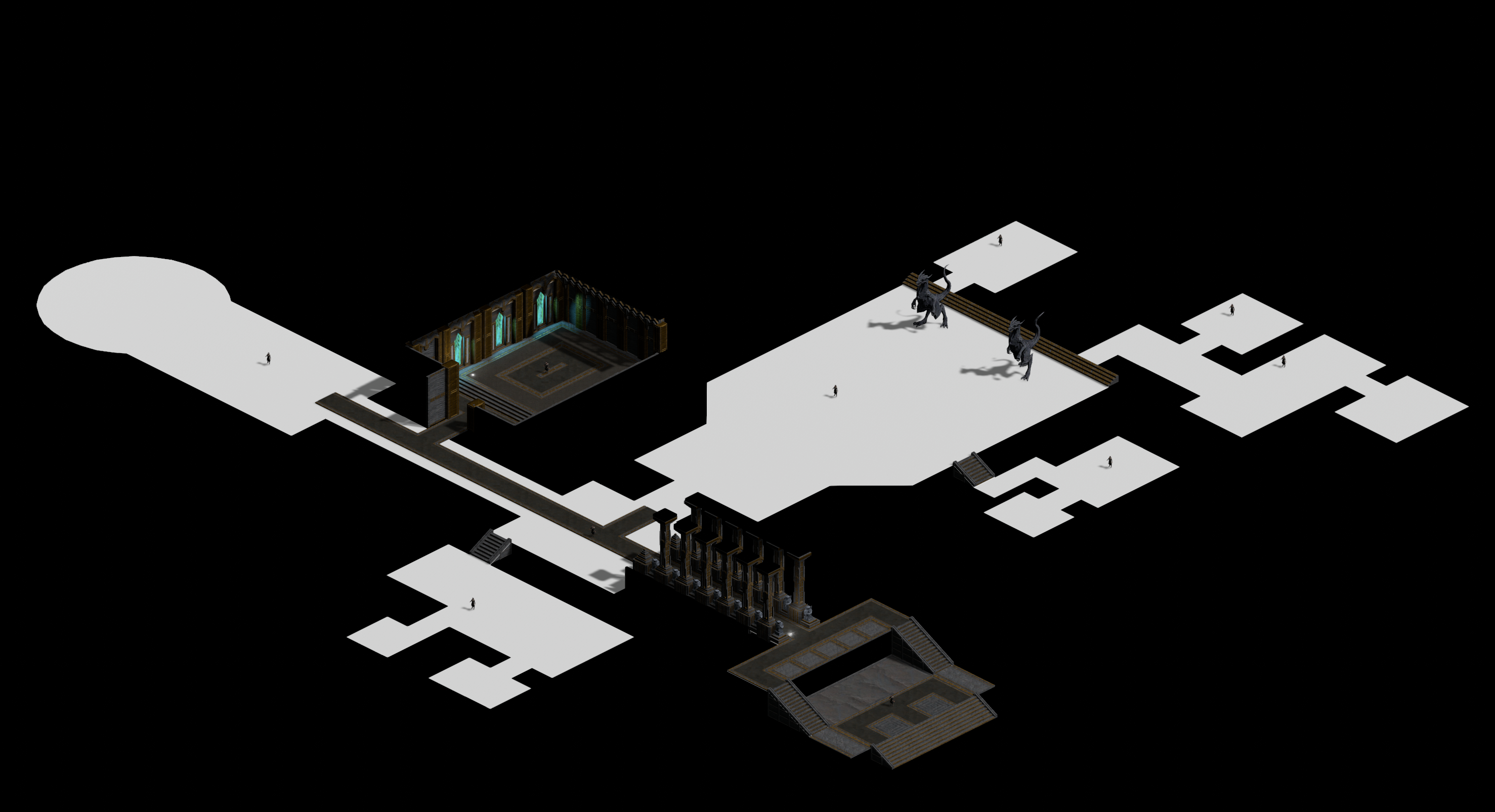 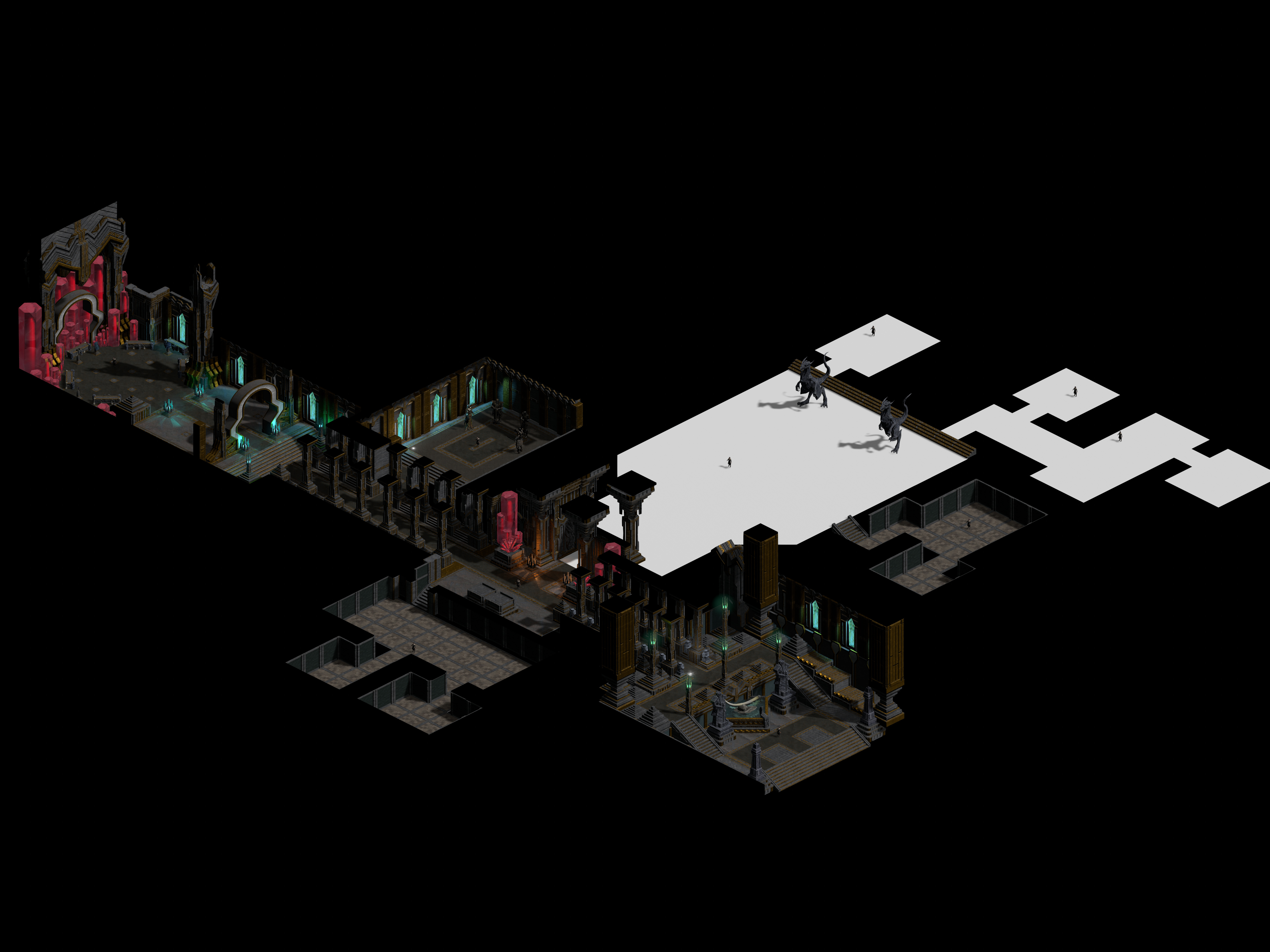 A scene is gradually built, from ground up, with a neuter light to better see all the important details. At this stage, we mostly take into account navigation and boundaries; everything must be as easy as possible to walk through, while enemies can’t remain stuck in place or block a player in a corner.

When everything is in its place, we tweak the lights according to the mood we want to achieve. 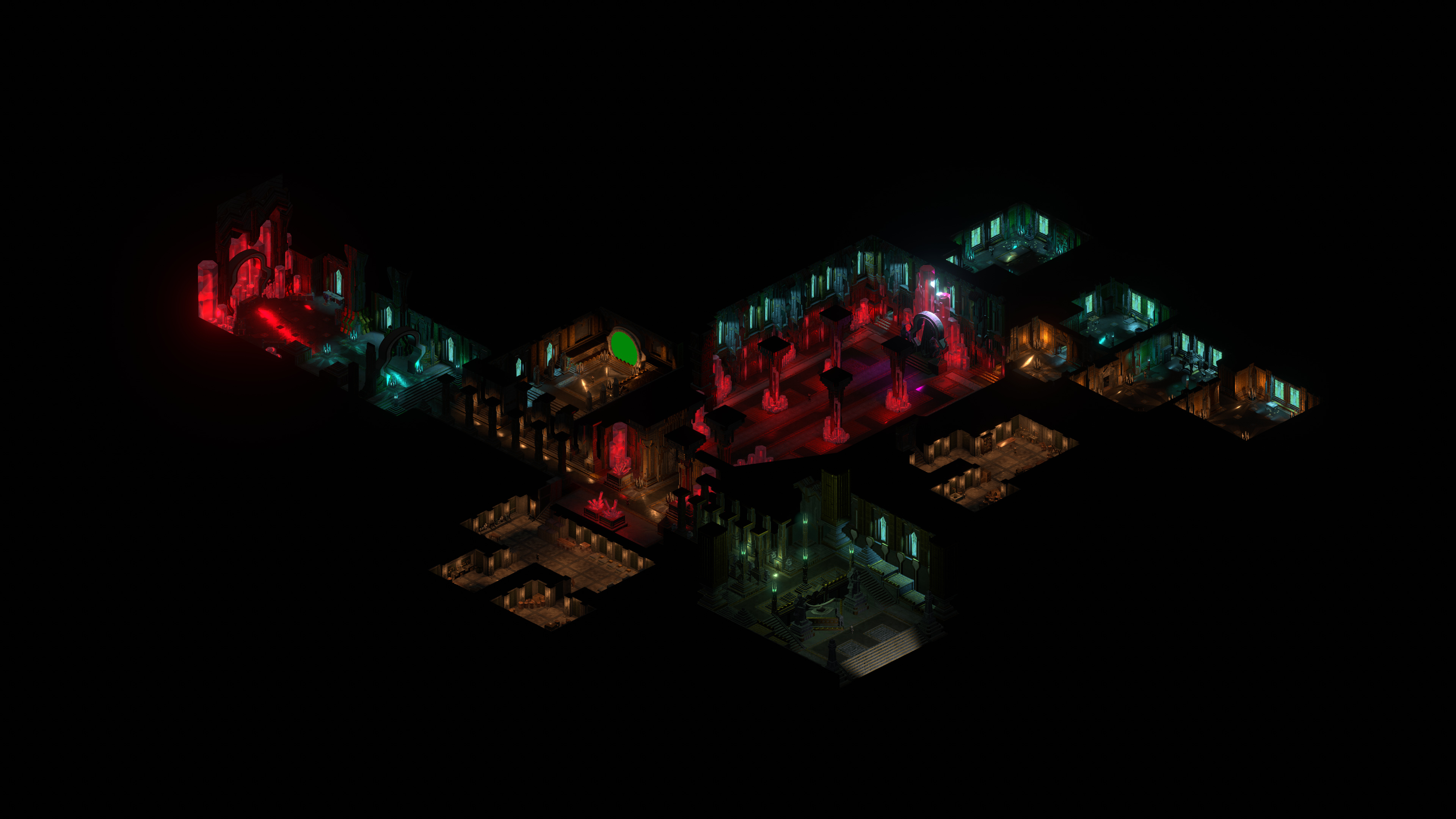 After that, we focus on VFX such as post-process, fog, and particles. Keeping in mind that everything is going to be baked onto textures, we make sure to migrate animated elements to final scenes, such as flames, water, and similar VFX. At this point, the vast majority of the work is done and we proceed to bake everything into a set of textures that our proprietary tool automatically outputs as an array of pictures. Not only is a color texture produced, but also technical elements such as depth, occlusion and geometry information, as well as navigation and real-time lights. 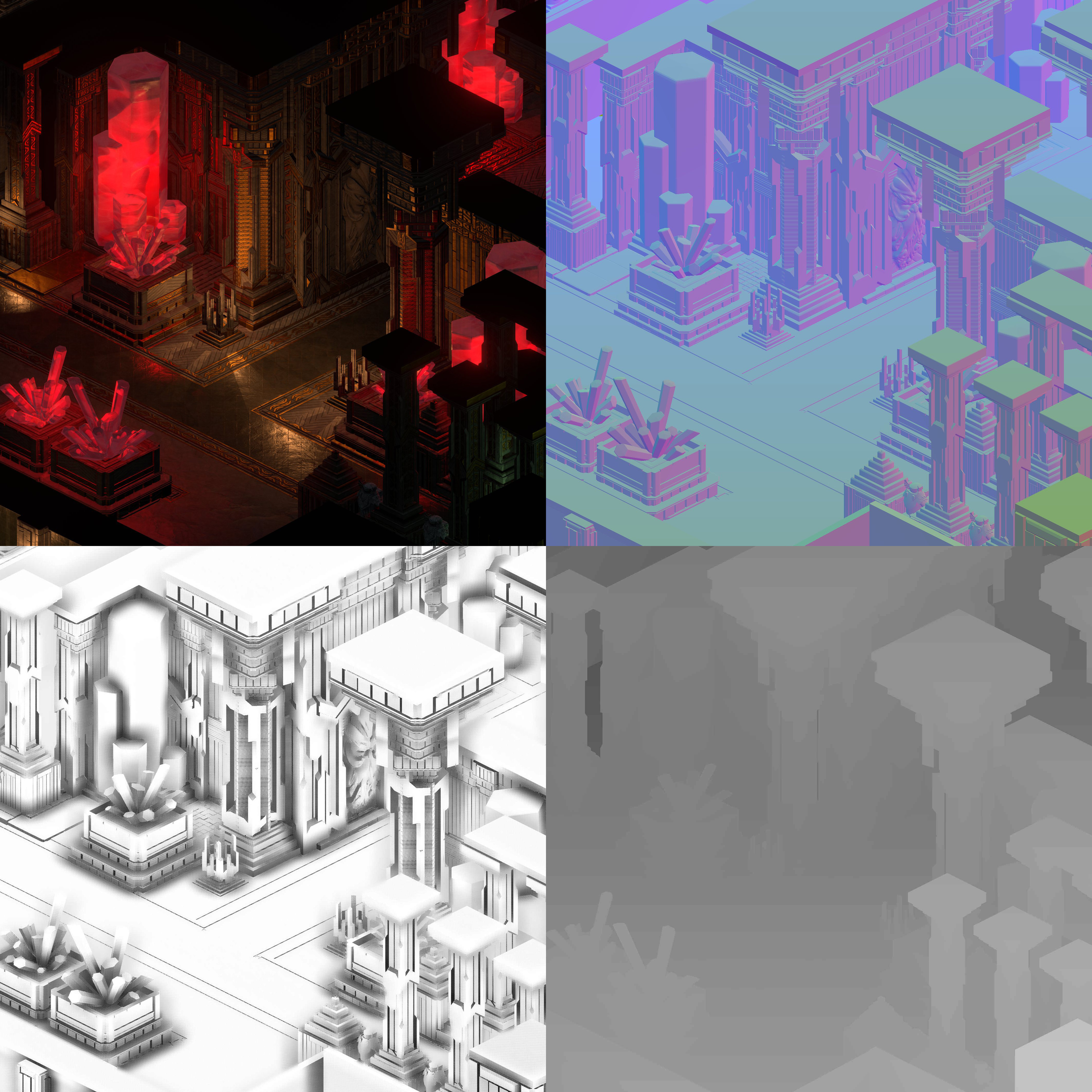 The technical stuff is being moved into the final scene to make things work, while the color bakes undergo a final step of hand painting to enhance details that would be too complex to do in 3D.

Lastly, the scene is populated with NPCs and mobs and tested over and over again to ensure that everything works as it should.

The entire process takes 3 to 5 days, depending on the size of the area. This is why we were able to create over 100+ areas with a relatively small team in less than a year. Completely 3D scenes would have needed much more time and resources to achieve similar results, with the need of a much more powerful machine to run the game.

Lore updates will be posted on Steam every Wednesday* and will introduce key characters, companions, guilds, places, monsters, stories, gods, legends, and so on, to give you the full picture of the work we’ve done to bring this epic world to life. A brand new piece of art will be available every Monday* as well!

Be sure to check Steam every other Friday* to get an update on Alaloth’s development. The updates will give a general overview of in-game content, explain gameplay features, give insight into the gaming tech we use as well as reveal other game-related content.