Hey everyone, time for the update. Got a lot to talk about so check inside!

Hello and welcome to our very late development report! Sorry this is so late but things have been crazy over here for the last couple of months and a new system build got in the way of working on stuff so I am still in the process of catching up on everything.

First I wanted to quickly recap why I wanted to add April to this development cycle. By doing so we are now on a yearly updating schedule, meaning that the last development report will now fall on Nov/Dec instead of Dec/Jan. It just makes things a bit easier for me and for you.

Now, for what did not get done. I was not able to finish the introductory video for the channel and in fact I have since decided to go a different way entirely. This was due to the size of the video. At the very least it was going to be six and a half hours long. The footage I recorded was not very good quality because of the speed I was speaking at during some of the later parts. If I slowed it down considerably then we are looking at about 7 hours to 7 hours 45 minutes. That is just far too long; that is almost as long if not longer than the Dune miniseries even and that is saying something.

So what I will be doing is a much shorter, say 25 minute, video and then breaking down the larger video into multiple videos based on the topic. So information about specific game mechanics would each get their own video for example. This will allow me to shorten times considerably and also make better quality videos.

I will have this all going by the next update.

Not much coding was done either. I did get a bit done towards the last couple of days last week but that was about all of the coding that was done. I also did not get to work on Burnt Asteroids though I did hammer our a new beta track in the last week called Shallow Dream.

So, now for what did get done:

I finally got off my butt and did the infographics though only for the races I had already had that information done for. I will get the others done for the next update. I went through and also redid all of the race icons so that they were higher quality and could be properly used. 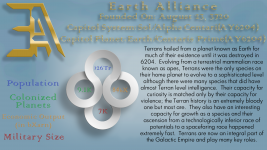 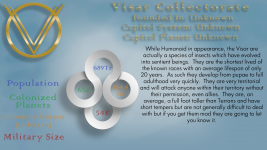 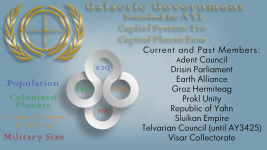 The coding I got done revolved around setting up a cache of effects that can be tied to items in the game and that can be used by modders as well. For more on that see the last developer's vlog video.

Lastly, as I mentioned earlier, I have a new beta track called Shallow Dreams. It is not completely the way I want it but I could not work on it more due to time constraints. I will try to get more work done on it and Burnt Asteroids for the next update.

Here are the videos (song and first DVlog video):

Sorry if this news article seems a bit rushed; attempting to get it done quickly so I can head into work. I may update it when I get back so if it somehow is authorized before then be sure to check back tomorrow.

Thanks for your interest in the game!