An overview of work done in the last month, bringing to light recent improvements and development issues encountered during the month of May. Will be followed by a Historical Profile on Teispes and Anshan.

Posted by Godream_Interactive on May 27th, 2015

Before I begin I would like to apologize for the long delay in my earlier statement concerning bi-weekly dev posts. I have moved recently and have had alot going on. But enough about that, work continues!

So far recent weeks have seen me focus (with help from several interested parties, {especially Witcher from the Paradox forums!}) on the Greeks, Scythians/Sarmatians, and Several Mesopotamian/Iranian cultures.

The Greeks have had several localisation updates, several cities and titles have been renamed. A quick summary of the major powers:

Sparta and Athens have been properly established as per the 653 BC start date, with Athens having a fictitious Archon in power and Sparta having it's proper dorian king, King Eurycrates in power and ruling over nearby Messene. Nearby Corinth has the tyrant Cypselus ruling over it and Thebes having a fictional ruler as I can not seem to find any historical information on that period's leadership. The cities of Chalcis, Elis, Patrae, Megara, and Elateia have all also been implemented although some of them are baronies and not actually ck2's "County" holding due to geographical limits and my map modding limitations.

I have done a complete overhaul of the Hellenic Beliefs, with the actual faith being almost 100% playable in terms of game balance. The Faith functions as such: Olympianism is the main Hellenic faith with several possible heresies such as the cult of Hera, Pandeism, and the Eleusinian mysteries implemented. Olympianism uses the autocephaly mechanics to replicate an influencial High Oracle in Delphi and allowing other historic Greek Temples to play prominent roles and have local seers and priests exercise influence within their respective domains. As a result, the Olympians do not have a centralized religious leadership and different Oracles/Priests can via for followers/power which was my intention to create a non-centralized system for the faith. Most of the localisation is complete as is the gfx files for the title, icon, and religious wear. Here's a WIP shot: 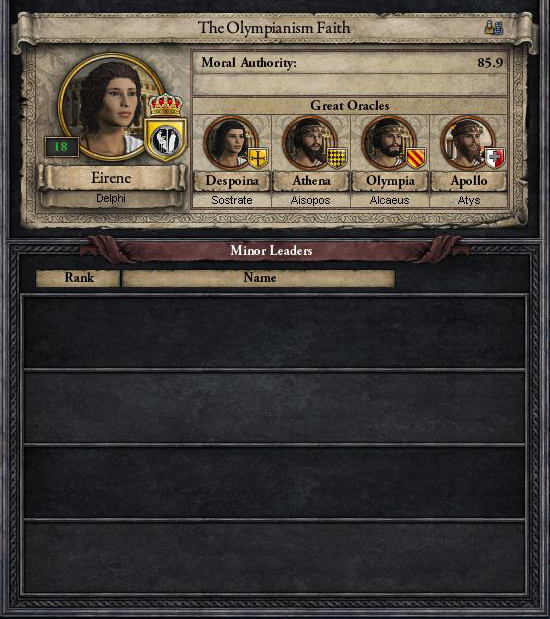 I have redone the Scythian and Sarmatian faiths as much as possible based on the scarcity of information on these religions. They are both "pagan" and I may make the Scythian faith reformable after I have completed more research on it. Both are basically "Umbrellas" for the different faiths and beliefs of the little-known Cimmerians, the Scythians, and the Sarmatians (Aorsi). Prepared Invasions may be declared by rulers and the government type is tribal for Scythia and Cimmeria, which is intended to encourage their aggression and allow raids into the southern kingdoms. Neither has a head of the faith and are quite similar overall in their mechanics to vanilla CK2 Pagan faiths. Both faiths allow raiding and promote aggressive behavior from the AI.

The extent of the territory for the Cimmerians and Scythians harrassing Lydia, Urartu, and Media this time is based on map information showing their advance into those kingdoms. Historically the Scythians and Cimmerians would eventually ally themselves with the Medes against the Assyrians and cause the collapse of the Neo-Assyrian Empire. 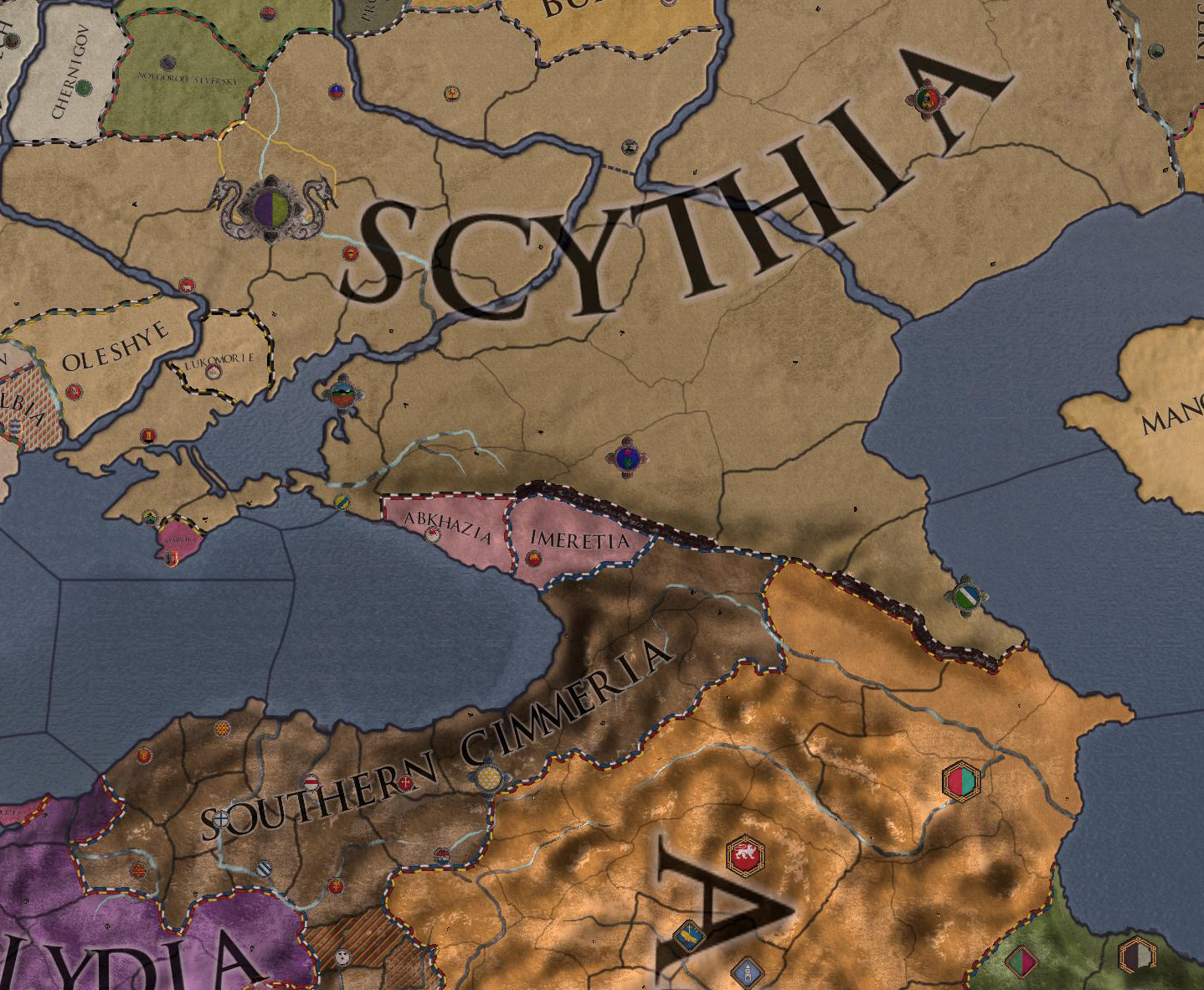 Although much information is available on the Scythians later in history, this time period does not seem to have much information on the Scythians and Cimmerians from what I could find. Although there seems to have been much political "tug-of-war" in terms of relations with the Medes from what I recall, leading to fighting and friendships between the two groups at different times.

Moving on to Eastern Mesopotamia, Elam, and Persia. I won't go into historical details too much as those will come in the "Historical Profile Post" shortly. I will post some quick information on the faith of the Elamites though, so there is no official title so I have temporarily called it Kiririshian as the Elamites most revered deity appears to be Kiririsha. As the Elamite goddess is revered greatly I enable female temple holders for their faith. The King of the Elamites is also the head of the faith and it's holy sites are centered in the lands around Elam for the most part, so the faith is highly centralized and it does have several pagan mechanics, including priests may marry and also Elamites may raid their neighbors (raids and interference with Mesopotamian politics were common activities for the Elamites according to Ashurbanipal). Localisation and the clothing GFX have been completed and just the icon and flag need to be completed. Here is a WIP screenshot of their religion overview tab: 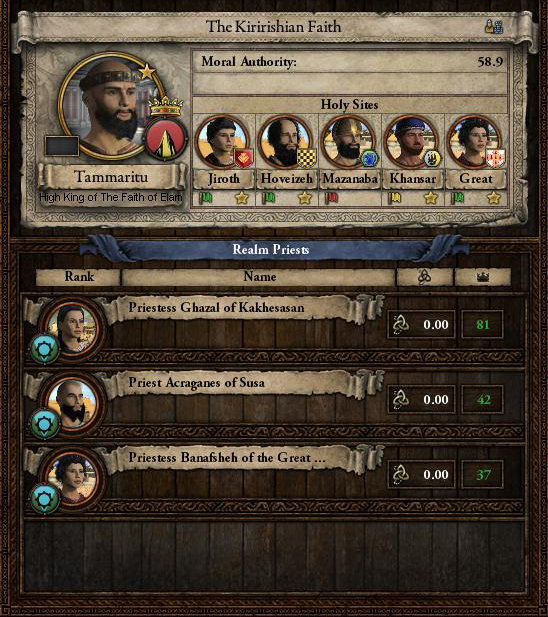 Also, I reworked the region around Susa (ancient Elamite capital) and also created a more unified patchwork of persian states around Elam to eventually follow history's plan for it. The Elamites rule over a large persian population in the north of their kingdom, one of the more prominent leaders in that part of the kingdom is the historical character Teispes of Anshan (although he does not rule Anshan in 653 BC) and he will play a prominent role in the first 25 years of gameplay. The region East and north of Elam's borders consists mostly of single counties at the moment but I am doing research into that area and trying to figure out what to implement there, so it is definitely WIP (although Sarangia, Bactria, and Sogdiana have been implemented in a basic way). I will stop here aso I can expand on this information in the Historical Profile Post and just mention that I have further work to do in order to balance the Elamites and the Persians in the region east of the Tigris.

I hope you enjoyed this Dev post. Work is continuing at a good pace, I also want to say thank you all for following the mods development and I hope you are excited as I am to be able to play with the ancient world in CK2 fashion! There is alot more content I am working on at the moment but I also would prefer not to show screenshots etc until it is of a final quality etc. I have also been following the Paradox dev posts and from I have seen so far we will soon have Geographical regions and also Forts! this is pretty exciting and I can think of several ways this new additions fit right into the time period for the mod. I will be posting a Historical Profile Post soon!

Thanks for the lengthy and in-depth update :)

My pleasure, it's about time I posted some updates for you guys! ;)