Just a little update about the recent changes in development. And asking for some help with an issue in source.

Posted by ReezeTheVampire on Nov 6th, 2016

Hello, hello, everyone. I'm doing my best to keep my updates around once every five days or so. It will probably drop to about once a week once I get a little more steady with progress. There have been some changes in development lately that I felt obligated to let you know. Namely, I have switched to using the Half-Life 2: Episode 2 engine. I mostly made this decision because of the model selection within Episode two. The silo models contain a lot of cool stuff that will really bring the mod to life with a better attention to detail. This brought on a large slew of other issues that, quite frankly, I don't have the knowledge to fix. I am still able to make maps, though. So after spending two whole days of development time, which equates to about six hours for me, I finally got the Episode 2 Version configured; thanks, 2013 steampipe update for making source hell to work with. I did manage to get it working with models and updates and all of that. In fact, the entire second map I have been showing was made in the Episode 2 version. Below is a screenshot of my progress. 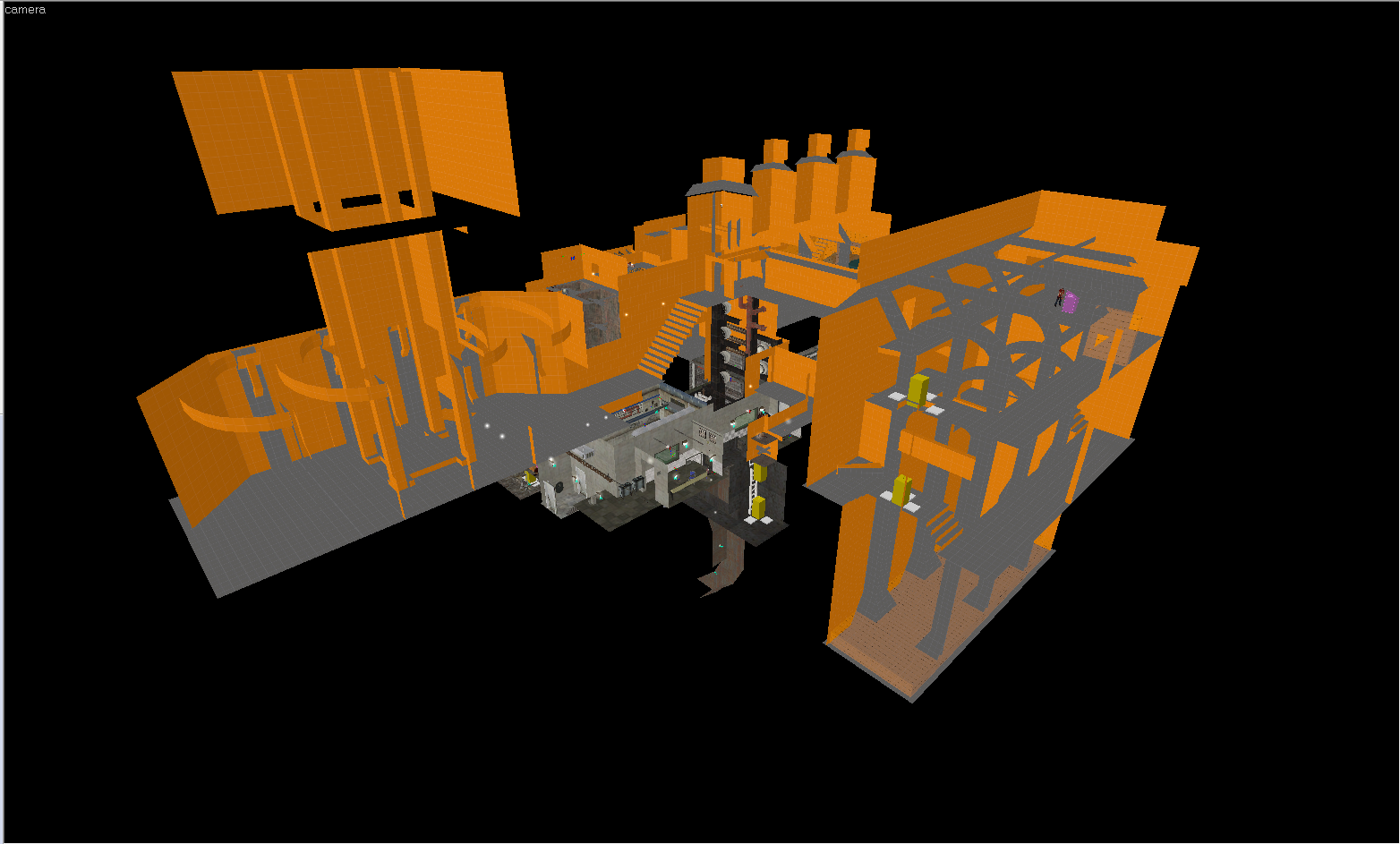 I have recently run into an issue with the compile, which I've seen before but I can't fix it this time. When I compile the map for a test play through, it no longer updates the compile, making it entirely pointless. Usually I would just copy and paste the entire map into a new Hammer map to fix that but, for some reason, that isn't working out anymore. On that note, I would really appreciate some help with this problem, so if you know anything about fixing this, please contact me here through a message. If you could, I would also like for you to look over my configurations to make sure they are set up properly; it may be working for me, but a flaw in configuration would probably lead to other issue down the line. Again, I would be more than thankful if I could get some help with this. Below are images of my configuration settings. 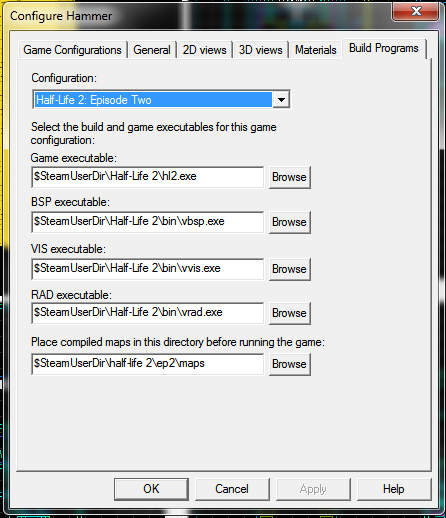 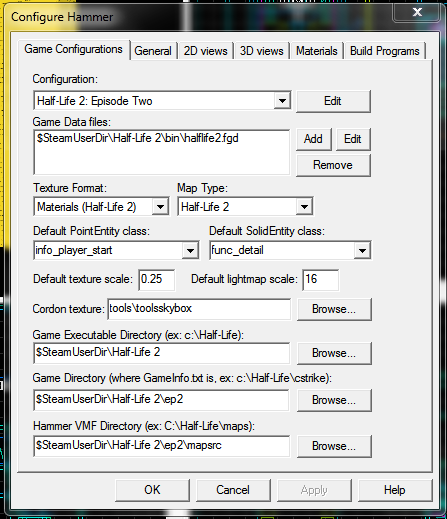 P.S. Have a screenshot of this cool hallway. 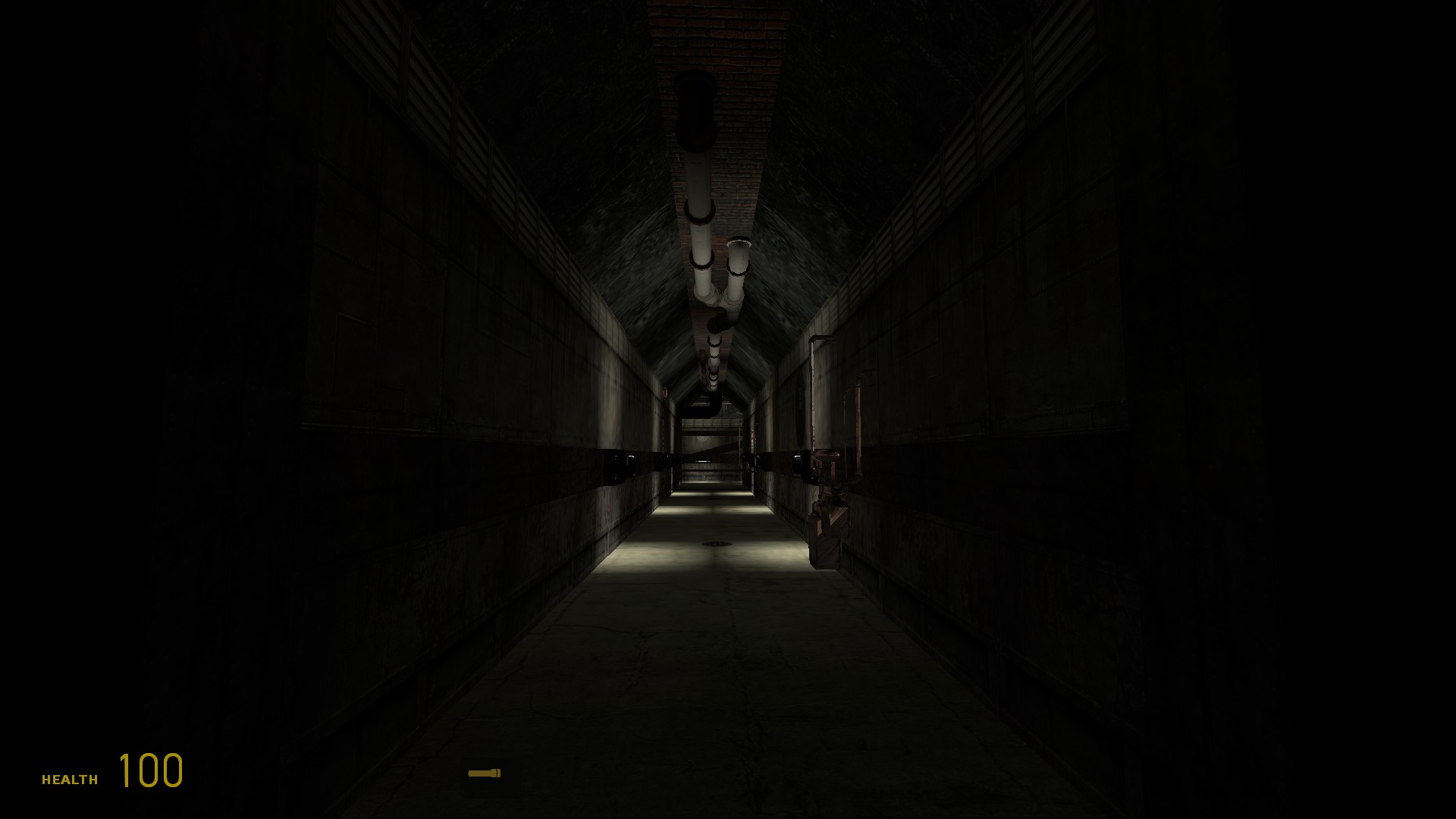 Chances are VBSP isn't completing for whatever reason. This is most often because there's a leak, but since I assume you checked that first, it's probably something a bit more interesting. Check to make sure all of your brushwork is clean, brushes are valid (you got some wonky stuff going on in that screenie), you're func_detailing appropriately, your overlays aren't on crazy brushwork, and any displacements are world brushes and have NO nodraw whatsoever. That's about all I can offer without seeing any compile log or checking the VMF for myself.

If what Crypt said didn't work, then delete the 'V'... .exe programs in the bin folder and Verify cache. this is a last minute resort.

Avoid cutting brushes on odd angles repeatedly, or using the brush vertices tool for shaping brushes. Anything of an odd or intricate shape would best be turned into a model and placed in the map as a static prop. One search on google for "hammer not compiling changes" resulted in a bunch of possible answers. Sorry I cant pin point it, but I hope my message helps a little.

Personally i never used the cut brushes option because that can indeed cause problems. About your question, it is simply impossible for us to see what is going wrong without the compile log, so please show that here so we can see what is going wrong. Sometimes a insane small issue can cause problems. I always started to cut my maps up when i couldn't find the problem another way. So i just did cut a part of the map, and compiled it then again, (not gordon tool but real deleting parts, ofcourse then fix the leak). And as soon as the compile went right i knew that the error had to be in the last part that i did cut away. Can take hours to find a problem this way, but at least you find it. You may contact me through pm or email when you want more help.
Much success,

I want to thank you specifically for you help. I decided to just start removing sections of the map, one at a time until I located the issue. I then reloaded the map, and deleted the one brush causing the problem. You saved me from remaking an entire map. Thank you so much.

Well he is the creator of some of the largest, most complex mods on ModDB.

Hahaha, you could say that. I even dream of working with it,
really.

Thank you all for the help. I will try each of these fixes then get back to you. I have an idea of what could be causing the problem if it has to do with brushwork. If I still can't fix it I may be contacting one of you. Again, thank you.

It looks good, and you are having problems with the Source SDK? because I can't get mine to start.

It's been really finicky ever since 2013. There are a couple of ways to fix it though. I'd recommend looking it up. There is an easy fix where you just find 'Hammer.exe' in your steam directory under the 'hl2' folder of 'Half-Life 2' in 'Common.' That was how I've been using it. However, it is best to configure it afterwards to make it more reliable.

Yeah, I've been using the halflife2/bin/hammer.exe, but for some reason my copy of the Source SDK half of it is configured for HL2: E2, and the rest is configured Portal(idk why)
I haven't got it to start in 6 months

Sexy hallway. Best of luck with the ongoing development.

Thank you for the encouragement.

Glad to read that you did find the error and that is was caused by a faulty brush. Cutting brushes up with the cuttool can cause this. believe i said it before but i never used it just to be sure. Glad i could help and always ask, this does save indeed a lot of time otherwise.
Much success whished with your mod,