In this developer journal we discuss the coming NuVO Market, Treasure Tokens and the new Hobby system.

Now that we've released Sunset Isle I wanted to spend some time and talk about what we’re working on next. We have some really exciting things planned, but everything has been in stages. The first stage was releasing Sunset Isle. The next stage is releasing the NuVO Market.

Currently in world we have the retail items such as Sales Terminals, ATM’s and the like. When we first built that system it was all about creating specialty items for content creators to sell and show off their wares in world. While we certainly have no plans to remove these items we wanted to expand on the offering of NuVO specific content, but ensure it remained separate from the current user content catalog. 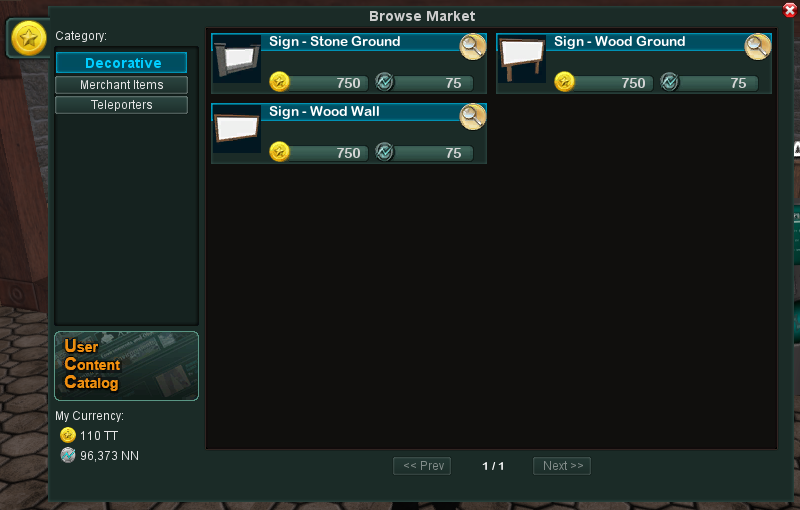 The NuVO Market will be a brand new shopping interface available in world where users can purchasing the existing content as well as additional decorative items, special titles for their avatar and more. We’re also working to integrate a 3D Viewer so that place-able items can be viewed in 3D before purchase. The NuVO Market items will be purchasable via NuVO Notes as well as our new earn-able currency called Treasure Tokens.

One big focus of the NuVO Market is the introduction of Treasure Tokens which will be our new earn-able currency. Treasure Tokens can be earned by completing achievements as well as working on Hobbies.

Hobbies are something we've mentioned before, but have not gone into too much detail. The first Hobby we’ll be introducing soon after the release of the NuVO Market is Treasure Hunting. Treasure Hunting will be a fun hobby that is great for users who enjoy exploring.

In order to perform the Hobby you’ll need to pick up a Treasure Finder in the NuVO Market. Once you equip your Treasure Finder you’ll have a new interface that will allow you to scan for treasure. If your scan is successful a new treasure item will appear and be marked on your mini map. Simply walk over to the item and interact with it to collect your treasure, but beware as there is a chance you can damage the treasure when you pick it up.

So what kind of treasure are you finding? Well collectible items of course. Each item you successfully find will be part of a collection. Each collection will have 5 items to find and after completing a collection you turn it in for Treasure Tokens which can be used to purchase new items and upgrades in the NuVO Market.

Treasure Hunting, and the other Hobbies, will have skill levels so that as you continue doing the Hobby you’ll level up and earn special upgrades and bonuses such as increased scanning range, reduced failure rate, Treasure Token boosts and more.

Additional Hobbies such as fishing and gardening are also planned, but Treasure Hunting will be the first on the list. We’re really excited about these new Hobbies.

We are also working on some modifications to the inventory system. As part of creating the NuVO Market we are working to re-create how inventory items are handled and stored on our servers. One of the main reasons is to better separate an inventory item from it's purchase record. Currently the list of items in your inventory is generated by the associated purchase information which created one big limitation which was the inability to remove items from your inventory as we don't want to be removing the original purchase records. We don't plan on making any large functional/visual changes to the inventory system, but we will be adding some minor tweaks such as being able to remove unwanted items from your personal inventories.

That wraps it up for this Developer Journal. So until next time... have fun out there!