In this blog post, we look at some of the animation tools and techniques we’re using to bring Bushido to life!

It’s been busy couple of weeks for the team here at Meteor Pixel team, as we forge ahead and are slowly getting closer to finishing up the pre-alpha build! Safe to say we can now clearly see the light at the end of the tunnel, but we’ve still got some way left to go…

As for what we’ve been up too, it can be quite neatly split into 3 areas: Environments, Characters and working on our Combat system.

Kieran has been working on retopologizing our new ninja character, which is very nearly ready to be rigged and put in game.

Jay has been plugging away at our Combat system and has now implemented a pretty robust multiplayer solution where we can all run around and hit each other! 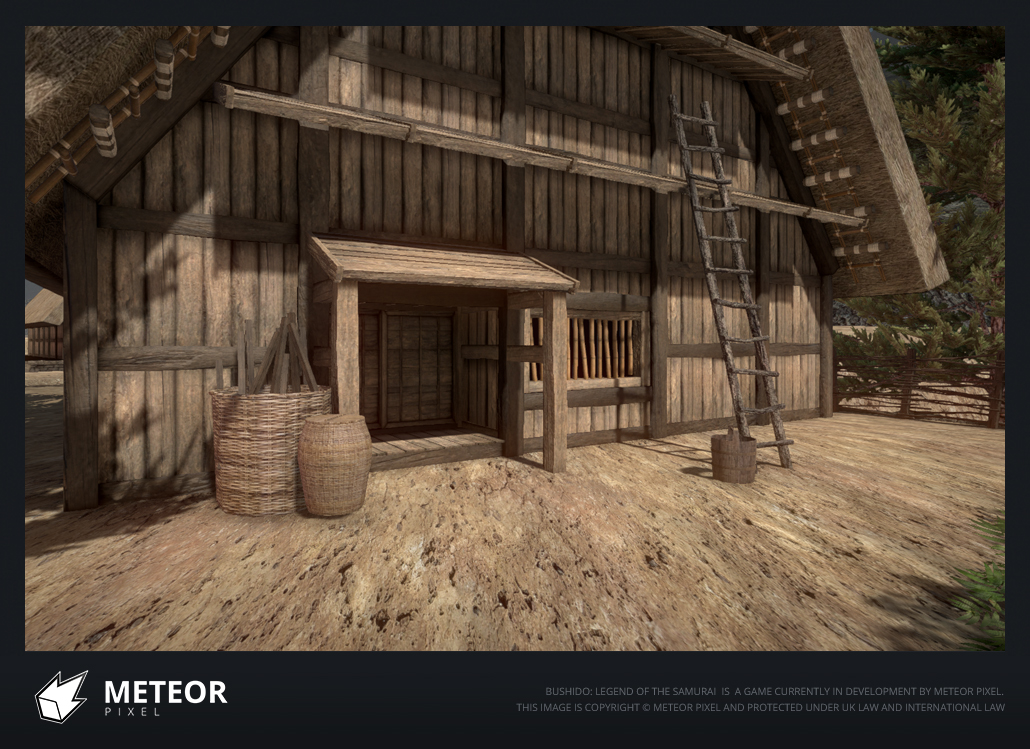 On top of the progress outlined above, we’ve also been investing a lot of time (and money!) in developing our animations. We’ve run a number of motion capture sessions to try and accurately re-create an authentic Japanese Swordsmanship style in the game.

This has involved working with a local club and spending a LOT of time designing the system so that its both historically accurate AND fun… We think we’re really onto something, and have developed something that going to get people really excited. We’re planning to show it off within the next 4 weeks or so, giving us time to implement some of the latest motion capture data.

For anyone interested, the shots below show the basic workflow for using the iPi Soft motion capture system and getting those motions into Unity: 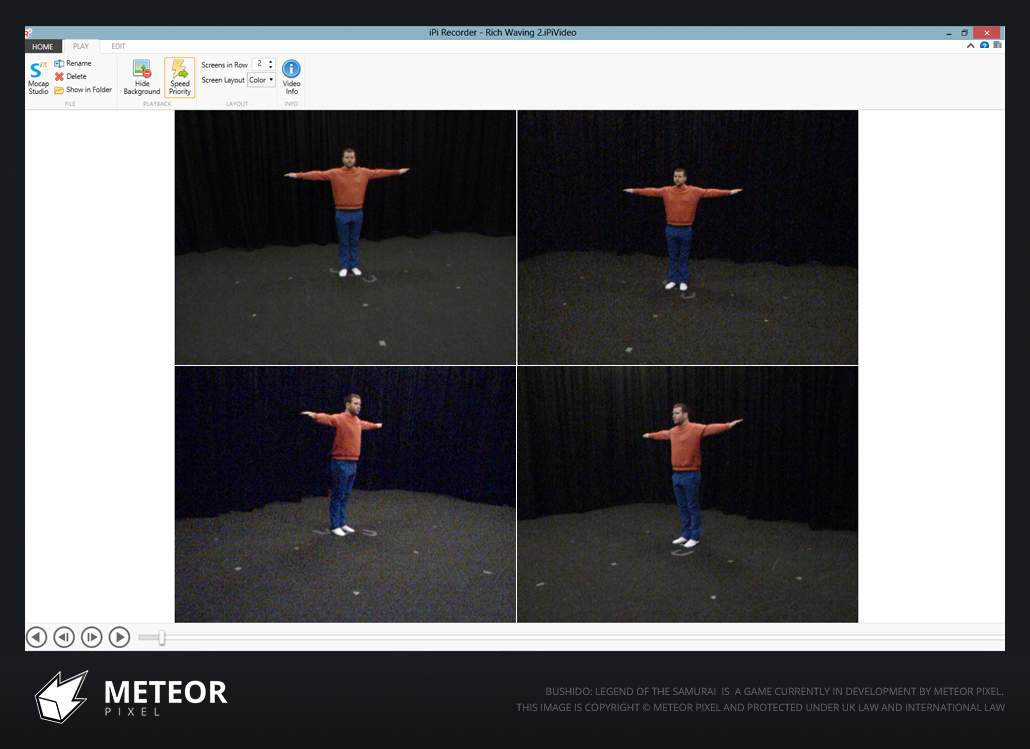 We’ve been very lucky with the project, and have found a number of people who are willing to give up their spare time to help us with it. Rich, shown in the screenshot above, is a member of a local martial arts group who practice an authentic style of Japanese Swordsmanship.

Rich has helped us out on a number of occasions, and our last session (last week) allowed us to capture some really high-quality motion data that we’re going to use in the game.

The screenshot above shows 4 USB cameras being used in a semi-circle layout. Each camera captures at 640x480 at about 60-70 FPS. This layout means that we only get a little occlusion (parts of the scene that are hidden from the camera, e.g. his back) and a really high-quality capture. 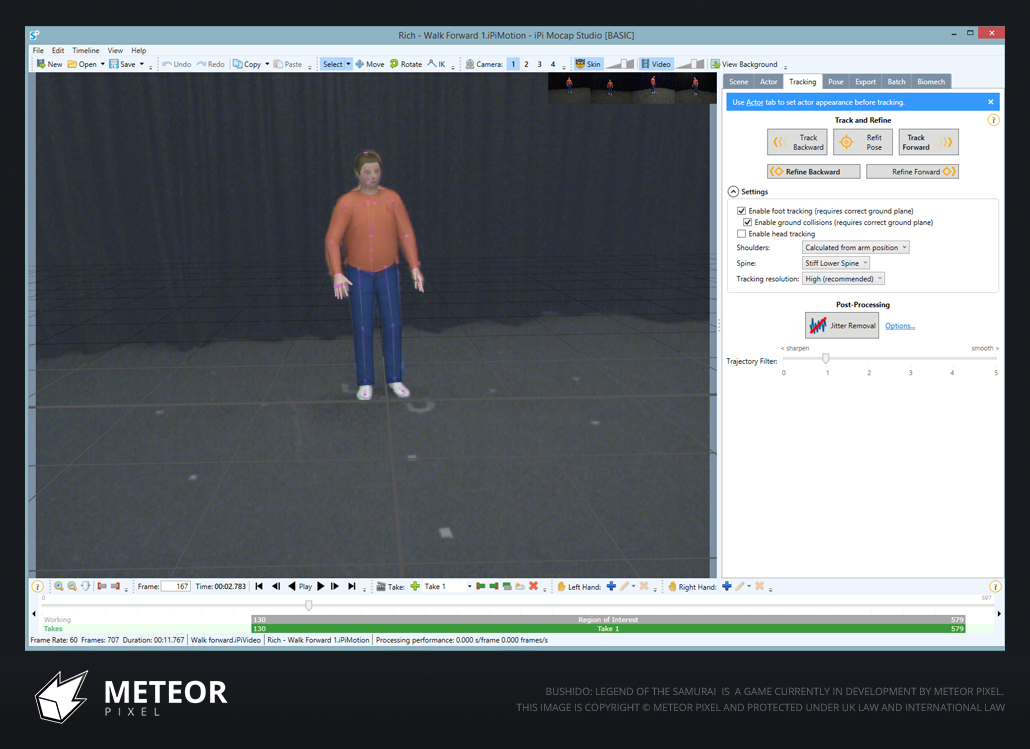 We then use the iPi Soft software to map the video data to a 3D Character. The software effectively works out the position of the actors limbs by looking at the data from all 4 cameras and then comparing them against each other.

It can then average out the location of each hand/arm/leg/foot/head etc… and add all of this data to a 3D character rig and add a key for each frame.

iPi Soft comes with a suite of tools to help clean up your data and get rid of any jitter. The result of this post-processing is a really nice smooth motion which you can then export to FBX. 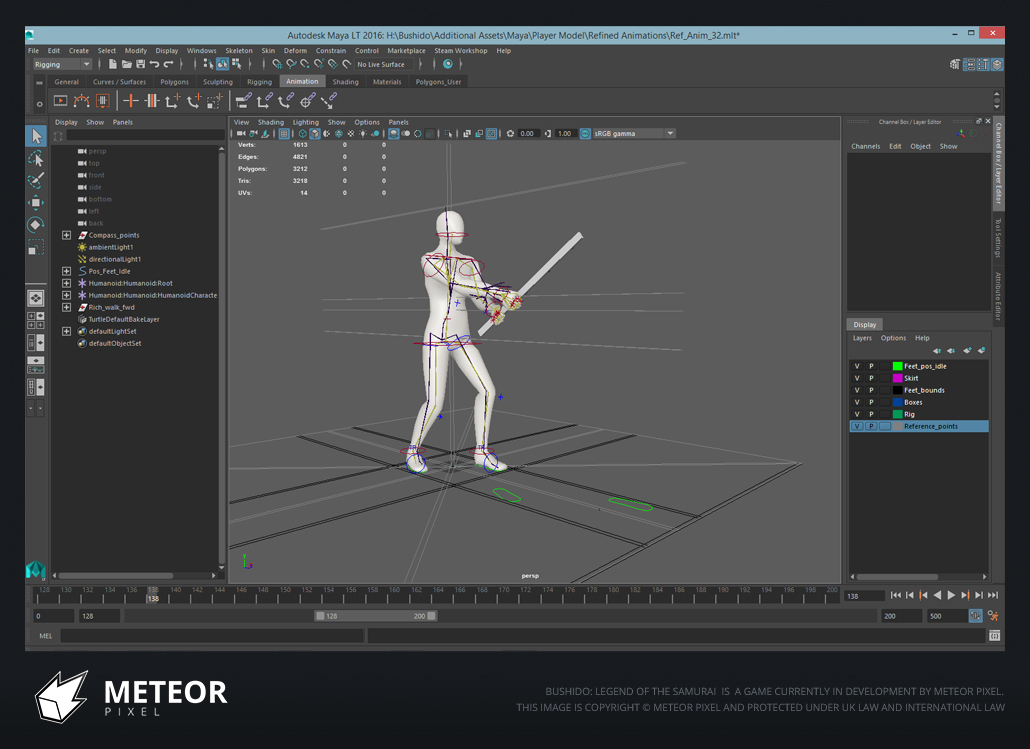 We now need to clean up the animation in Maya, and get rid of any unnecessary keyframes. Some motions (e.g. waving, interacting with a door, etc…) can be cleaned up and used ‘as is’. However, looping motions such as walk cycles, etc… Almost always need to be cleaned up and edited by hand.
This process takes time, but personally I think its worth it because the quality of the motion is almost always higher than if you had done it all by hand without any references!

Thats it for this Dev blog - thanks again for reading and stay tuned for future updates. Remember, you can always stay up to date with the very latest news/screenshots/etc… by following us on Facebook or Twitter.

Great work!
So you don't use the Kinect cameras for iPi?
Wondered if it is worth a try, but those cams cost some bucks for a PC version.
As always, great content! Really shows off your skills and lets Unity shine bright :)

Thanks Ravenblood! Yep we used 4 USB cameras and are thinking of upgrading to the pro version of iPi so that we can use 6 cameras (although we'll need a new PC to do this so we'll have to save up for it :p ).