During the last two months I completely rewrote the phyiscs system, I added multiblocks, basic trees and started to work on the power system! Check it out!

I thought it might be time for the first devlog. I hadn't had too much time to work on the game, but I made some decent progress.

Before I show you what things have been added/changed, I want to talk a bit about these devblogs.
Devblogs will probably come out every month or every two months, you can follow me on Twitter (@ProRedHD) to see progress earlier.

So lets start, shall we?

I completely rewrote the physics system, the system I used before was written very early on I didn't really like it, both code-wise and gameplay-wise.
So I changed my mind and switched to AABB collision. I can't really show you something like a picture, but if you play the game it feels a lot better than before.

I added very basic trees, they vary in height, but otherwise look the same. These trees are more like a test for world generation, the system I use for generating is not very good.
It will be rewritten for sure.

MultiBlocks are blocks which are wider than normal blocks (32px). I had to make a lot of changes to get it to work and I'm really happy with the end result.
MultiBlocks will allow me to add big machines or for instance a very simple rock (as shown in the picture). I'm not sure if this rock will stay in the game, but if it does, its texture is very likely to change.

I'm excited to show you the power system. Keep in mind, that the power system is at a very early stage.
There are a lot of bugs in it and there is high chance that it is going to work completely different next time. 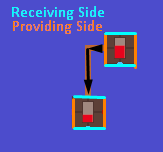 Item Storage and Transportating is the next big thing I work on! I already drew the texture for a small crate that will be in the game. There might also be a medium and a big version. More to come in the next devblog.

So that is pretty much it! Let me know what you think!
-ProRed