You are an experimental robot developed by scientists on Earth. They are sure that you are the smartest of all robots. They have equipped you with powers that let you learn. Unfortunately, the research lab was shut down by the government and you would have been destroyed. But some of the scientists really wanted to see what you would be capable of doing, they were not allowed to do that on Earth, so they sent you off to another planet. A planet where no one has ever been to before.

The researchers were going to look at your behavior from Earth with the help of sensors and cameras, well, at least that was the plan. But during the landing on the planet, the engine of the ship failed and you drastically landed on the surface of the foreign and undiscovered planet. You, the robot, have been damaged and all of your past experience and memory have been corrupted and can't be accessed. Fortunately, the systems that let you learn and all of the sensors are all intact.

You, Beepo the robot, will discover amazing things on this foreign planet that is practically infinite in all four directions. You will be able to learn recipes to craft machines and other items, that will allow you to survive on this planet. This game is heavily focused around automation and semi-realism. Be prepared for cables, machines, logistics and all of that.

Almost all of the content in the game is loaded from files. These files are structured in a component-based manner. It is very easy to add new content into the game, you just type in all the component that you need for the new game object and the properties for it and you are good to go.

Should the tile be very hard to break and be only breakable if the tool used is better or equal to Steel? No problem, just add a MaterialComponent with the proper hardness and level.

Should the entity that you want to add have 50 health points and follow the player? Then add a HealthComponent and a properly configured AIComponent?

The game is still very early in development and a lot of the planned features are not yet implemented. Be sure to follow the Twitter page and read the articles on IndieDB, that come out every few months. 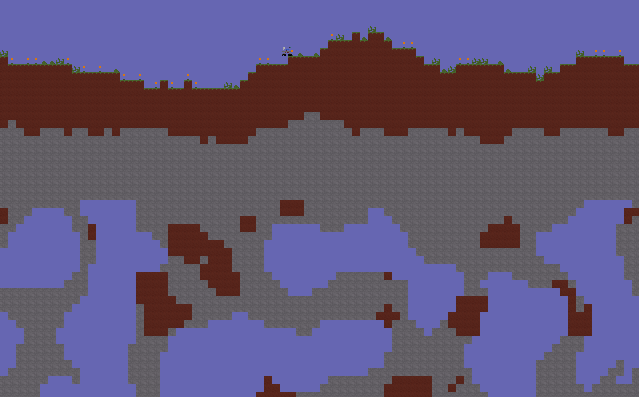 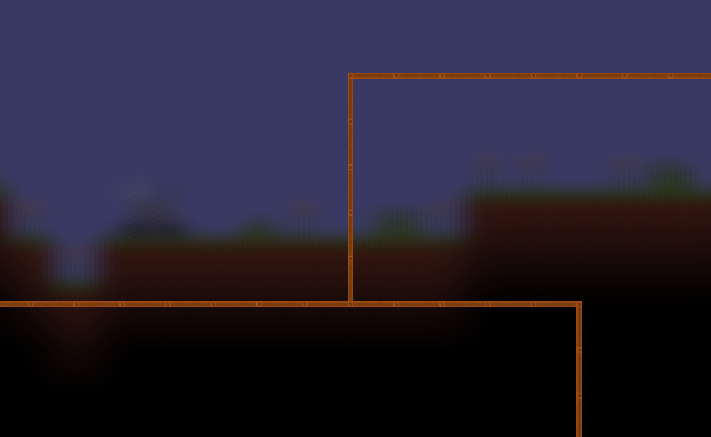 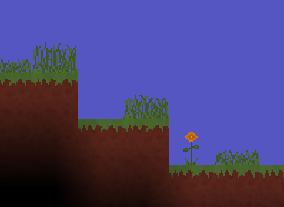 It has been some time since my last devblog! I have been working on a lot of under the hood stuff and not really anything that is visible in the game! There are some additions nonetheless, which I want to show you today!

The second biggest thing I worked on was the new hud. I decided to go with two panels. The first one is on the left and in it are all the inventories and controls of the player and also of the nearby machines and chests. The second one is on the right and this one is dedicated to crafting! Keep in mind that some areas of the crafting ui are still not done. 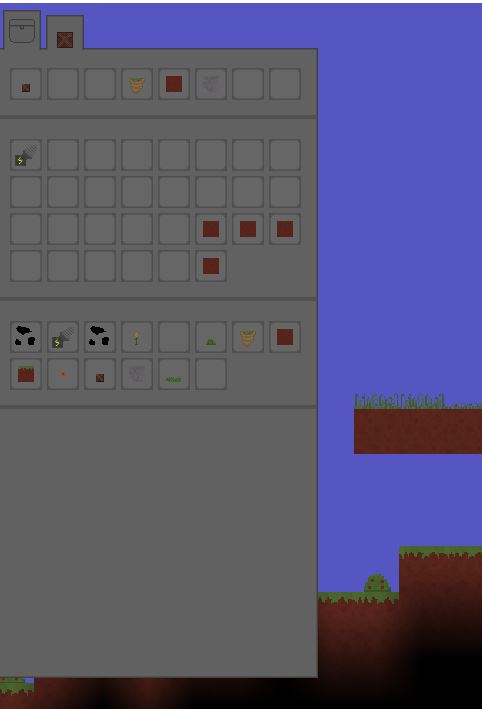 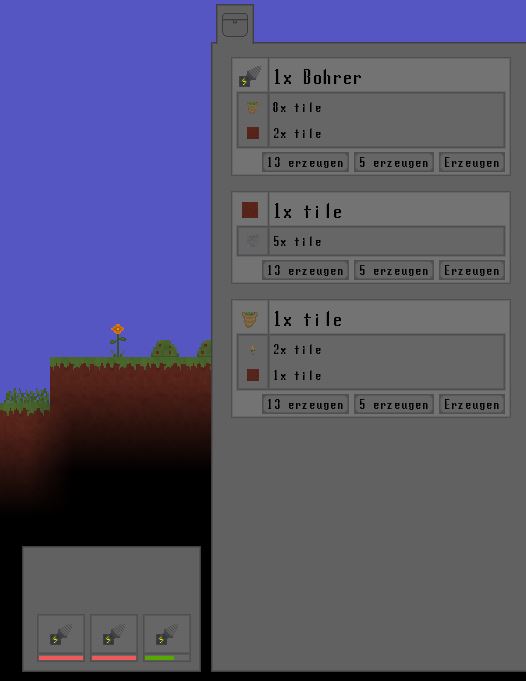 Canola is needed to produce lubricant for the robot. It was relatively easy to add the canola plant into the game since I programmed all necessary components for it a long time ago.

The biggest thing I worked on since last time, maybe even since I started this project, were content packages. Content Packages are basically a bunch of files in a folder that make up the content in the game. Every single tile, entity, item or even recipe you see in the game is all loaded from files. This was a lot of work to do since I had to assign all the ids dynamically and make sure those ids don't clash with other content packages that are loaded. You could load hundreds of content packages at once and play with them in your world.

It is very easy to create one since you don't require coding experience. I made sure to make them very powerful but also easy to understand at the same time. All game objects are made up of components. A component defines a specific behaviour or property. Here is how the canola plant is defined: 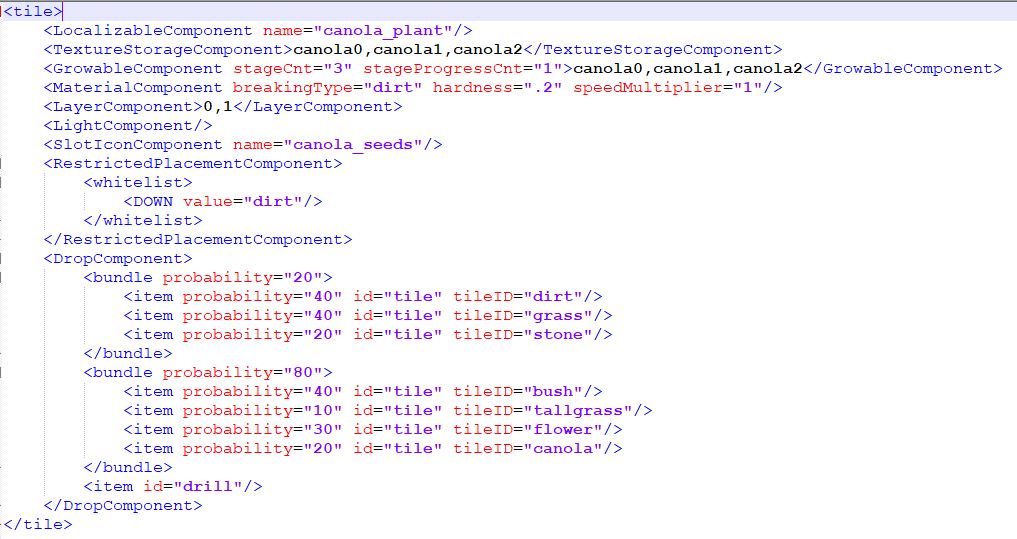 It might seem a little bit complex at first but it is really not. If you look at every component individually and understand what it does it is really simple. One of my favourite components are the 'RestrictedPlacementComponent', which defines where a block is allowed to be placed, and the 'DropComponent', which is a powerful component for defining drops when the tile is broken.

The last thing I did with the content package system was to add recipes.

The plan is to have variations in recipes. The player can find different recipes of the same type, one is cheaper and the other one might be a bit more expensive. He has to make sure to use the cheapest one in his machines or even when he crafts himself.

To end things off, here is a little video of the new stuff. I really like the gui fade-in and fade-out.

In the month of March, I implemented kinetic energy, consisting of shafts, gearboxes and a lot more. As well as growing grass, improvements to tile placement...

In the last two months, I implemented world & cave generation, power conduits and also added some foliage to the game. A lot more content to come in the...

I completely rewrote the game and I have an early technical demo to show you! Also, some story changes happened! Check it out!

In the last 3 months I added doors, fences, a new tooltip system and started to work on metal casting! Check it out!

Indie
Twitter
Tags
Embed Buttons
Link to Beyond Technology by selecting a button and using the embed code provided more...

Life is Strange: Before the Storm Adventure