As the development continues another map is in production, and in this post the matter in question are UI changes, as well as time has come to dynamise the dynamic traps. Check out this update on our progress!

Two months have passed since the last update, but the mod is not dead! Actually, it's gonna go for a
walk... :)

Previously we used to have only one map for any testing, and a lacking one indeed due to having designed as the mod was taking its infant steps, and therefore has been adjusted as the modification's concept changed. With this in mind another map (and, of course, future ones) has the privilege of being made for the final gameplay design. And this one, incidentally, has been tested on a linear map. With the decision of making a less-linear one it was obvious that code as well as level design had to be accommodated to our needs.

As any decisions made by the player rely heavily on the camera placement this is probably one of the most alarming issues. With multiple rooms connected with each other and multiple entrances it was easy to lose track of the room we were in. This would of course be easier with more details, proper texturing, however it's not very newbie-friendly as well as is quite obnoxious to experienced players. This is resolved by using different lighting, putting room-specific props that are then easily visible after switching to another camera as well as using different wall geometry. The picture below from an early version of the map shows how it's been utilised in a two-entrance area.

As it's seen the rooms are lit with distinguishable colours, one of them has a couple of concrete pipes and the corridors' walls are bent. Such features give better insight into the layout and don't need any detail-work to let the player guess where is the way in and out, what is instrumental in placing the traps properly.

Another problem with open areas is that it's not that easy to guess which camera is the next one in the camera-link, hence why another feature has been added which lets one easily switch view using right mouse button. By selecting one location, pressing RMB on any spot nearest visible
camera is looked for. If found player jumps to that one, letting the Ov easily navigate in outdoor or non-linear surroundings without worrying about wasting time finding the proper location. Its usability on linear maps is limited thought. In the end, however, navigating is much easier and frees the player from using the camera next/previous buttons just to find the proper angle.

Another UI change is the addition of a (currently) simple line being drawn to modules over which the player hovers, this also includes cameras when hovering over view switch buttons. It's a very rudimentary feature and it's only a mystery why it hadn't been in the mod since the beginning. The line also changes it's colour to correspond with the button's, which changes according to the module's state. 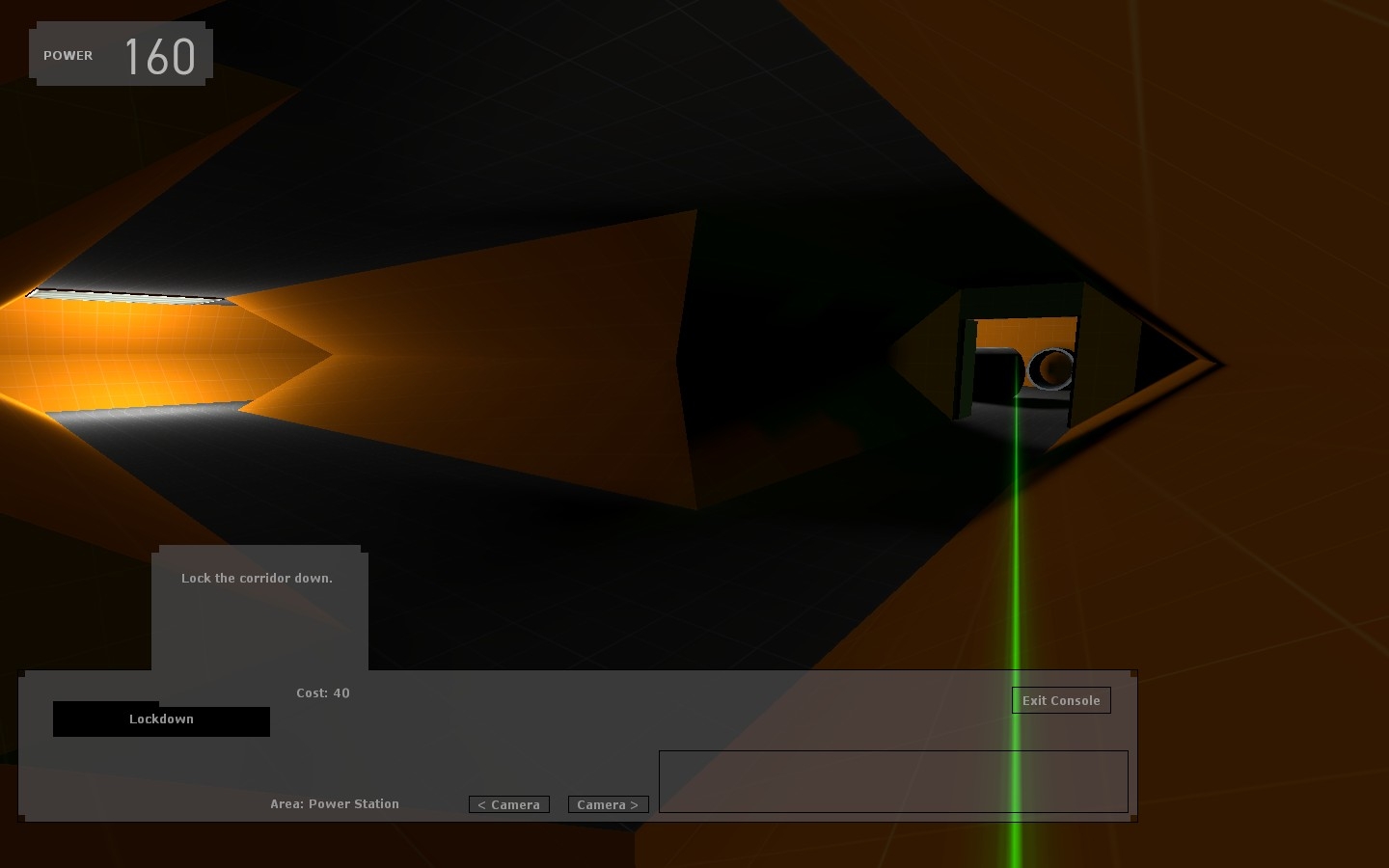 The dynamics of dynamic traps

Although there we got „static traps” and „dynamic traps” the latter are named solely to distinguish the fact that they can be placed anywhere, unlike the former type which is a mapper-made one. Their behaviour, however, was largely a simple one – they just kept on spewing flames, firing laser beams etc. even with noone else around. This quickly proved to be an issue – upon entering a room full of traps the first one to enter was largely screwed as he was the only one to be unaware of the surroundings, while the rest of the team was laughing behind his back aware of all the dangers. Therefore something was needed to wipe that smirk of their mouths.

This leads us to the point when it's time to alter the behaviour – first changes concentrated on making the traps more diverse in this field by simply stopping them from attacking until a rebel was in range. For instance the flamer only spews flames when an enemy is in its line of fire, thus hides its presence until it can attack. The laser, on the other hand, doesn't emit its beam until it can „see” anybody or, at least, they are very close to it. There are more examples to it, but generally it provokes using less careless tactics and doesn't give away the whole set-up at first glance.

Future changes will be determined by testing, but there are plans for more complex „cooperation patterns” to enable less predictable outcomes. However, all this might not be necessary and more direct changes might be needed.

Well, that's all we got time for today. I'd also like to mention that there is a position open for 3D/2D Artist for you to check out. As always we're eager to see your comments. :)

Looking good, keep it up :)

Like your ideas, sounds promising! Keep up the good work! :)