Posted by NathanTrimboliDesign on Feb 14th, 2017

Soundtrack
Sound Designer, Christine, put together our first slice of original soundtrack for ONESTRIKE. This piece is a procedural audio demonstration for rising tensions between Vive and PC players. Listen to the track below and read over the intended audio conveyance for asymmetric play between PC & Vive players.

Network Play Testing
The programming team, Matthew, Tyler and Corbin, put together functioning asymmetric Network play between a single Vive player and several PC players. We tested out the time delay between actions spoken and what we received visually, testing shows that the Network runs smoothly between Tallahassee and Orlando, Florida clients. More testing will take place over the coming week.

Sword Upgrade
Our Lead Artists, Noah, has been hard at work making a sleek upgrade for the Vive player's sword. Overall, the blade is close to the original design but the hilt received a major update in minor details.

Level Design
Now that many of the game mechanic details have been hammered out, it was time to start making a level. Nathan, has been working on this play area, first boxing out the general concept in Unity and then copying the design in Maya for more precision. The general concept is that the Vive player stands at level center with limited visibility while the PC players spawn on their platforms located at the cardinal directions. The PC players are all visible to the Vive player at the start of the match. Once the match begins, the PC players must navigate through the environment to find upgraded weapons, one of the 8 entrances to the central area, and form a tactical strike against the Vive player.

The most difficult part of making the map was handling how the PC players would initiate with the Vive player so that play mechanics would be balanced. The central room forces the PC players to commit to an attack and if they miss their One Strike, then that PC player must distract while their teammates find the means to take out the Vive player. The Vive player can only see right up to the threshold of the surrounding doors, creating a heightened sense of concentration and nervous or determined anticipation.

Not all of the doors are easy to get to from the start of the match. PC players are thrown into a warehouse like environment, navigating through hallways and around storage supply models [not pictured here]. Several paths lead to access points that are higher up on the central octagon's wall, providing the PC player's with a goal to find the best access point that works for them and their counterparts.

The original goal for the level was to provide a very large maze space for the PC player to venture before making way to the Vive player but for the sake of match time and player's not getting lost, cutting the map down 75%. 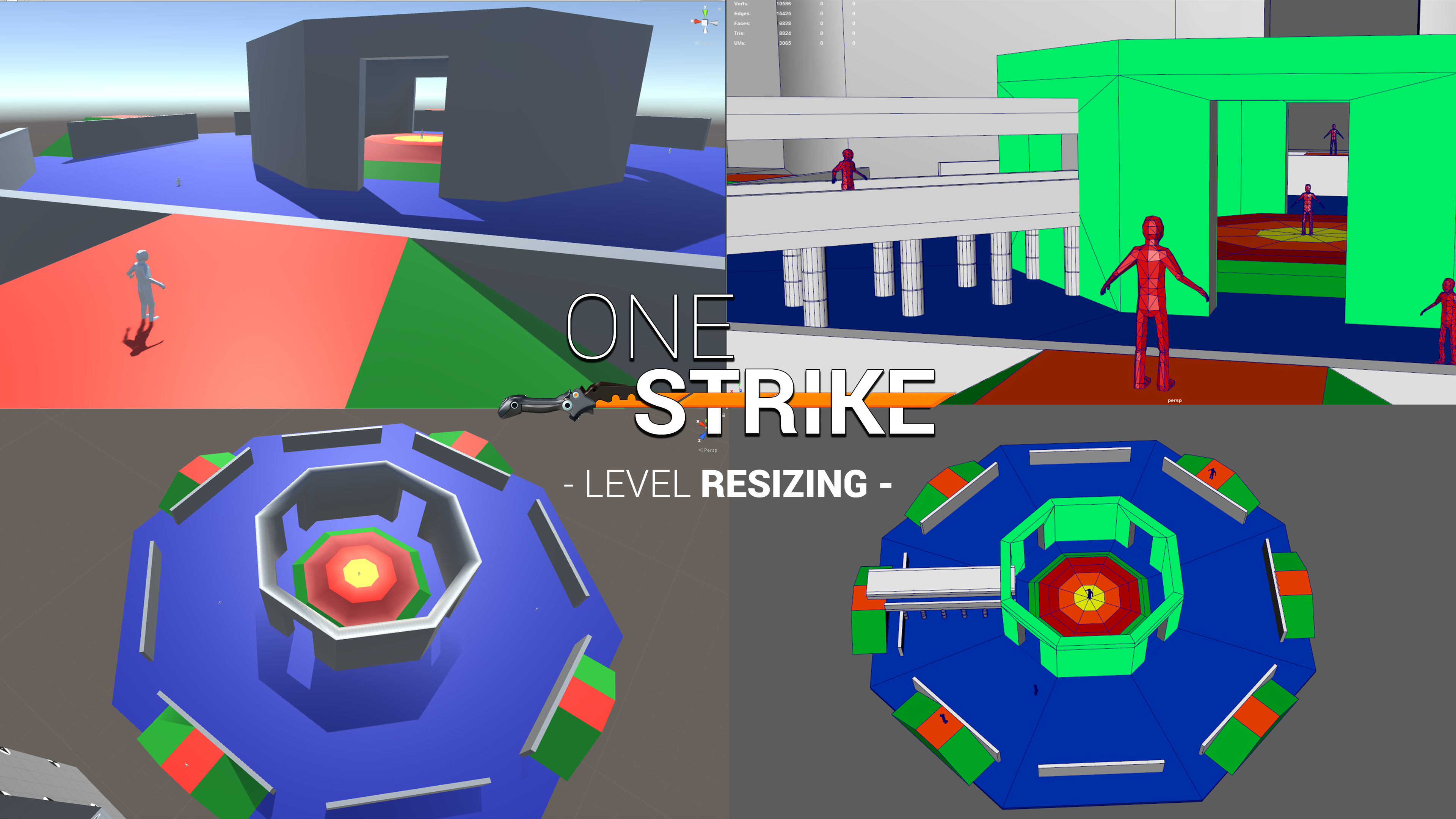 This design is still in construction. Testing will heavily decide future adjustments and any further designs.

Environment Assets
An new environmental asset, made by Jordan, is our industrial factory fans to help get the game spinning. They will be a decorative piece in the large holes behind the 4 PC player spawns. A handful of different weapons are also in the works but that will be in the next update

Social Media
Do not forget to follow us via our other social media outlets so that you can receive updates on the project as they are happening and can contact us if needed!