In this update I discuss our thought process as we continue forward designing enemies, bosses, items, dungeons & puzzles within the open world of Loomia.

A Darkness To Face The Light 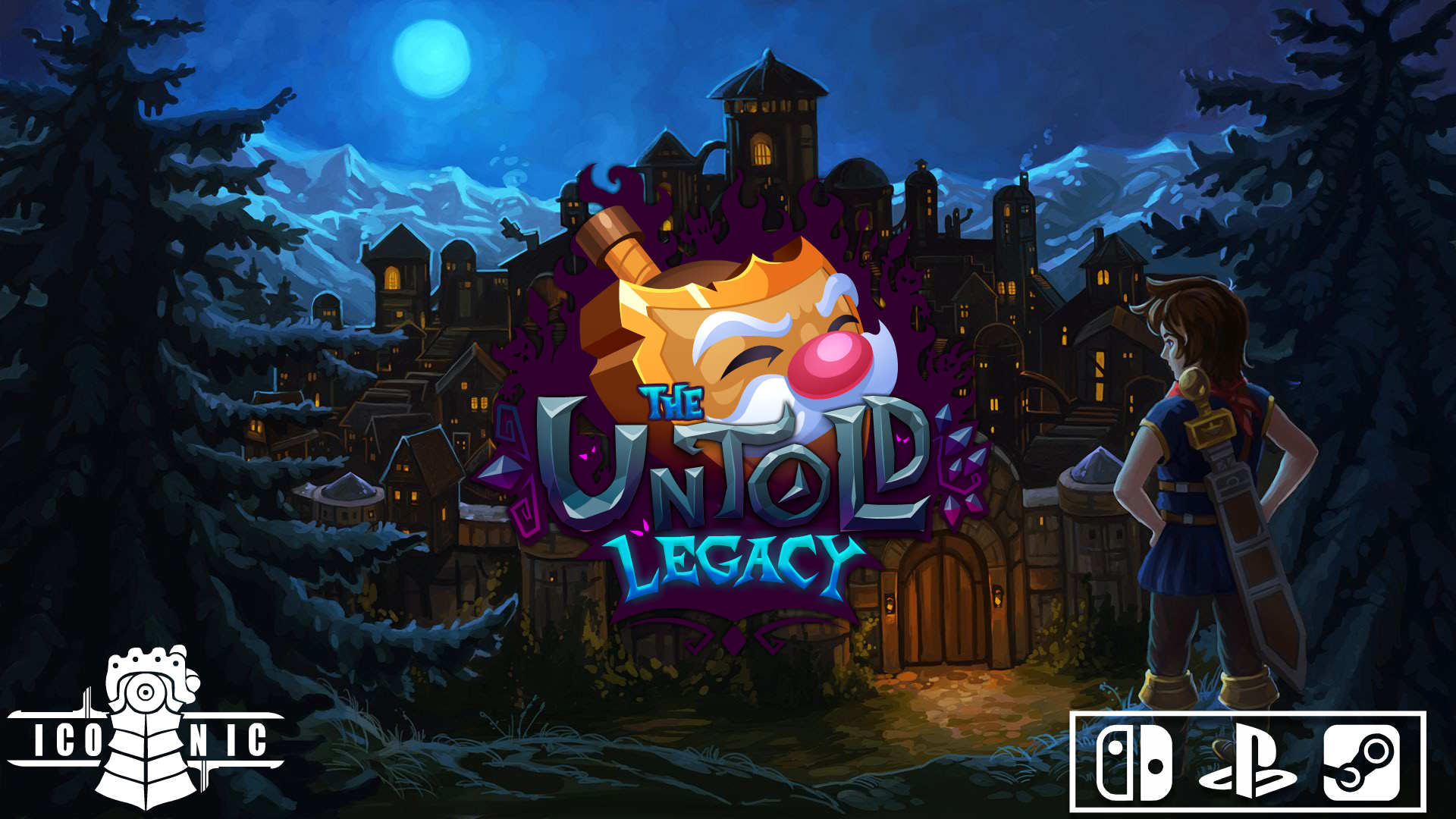 When it comes to creating enemies, bosses, characters and various monsters I really try to put gameplay in the forefront of the game, this way all npc's (non playable characters) are fun to interact with. Ive seen time and time again ( I have even done this myself) where developers focus on all kinds of very cool looking characters in a game but they are quite frankly boring to fight or interact with. Despite a compelling appearance not enough thought was put into how they would interact with the player. I think many games fall prey to this. That is not to say artistic direction and design cant go hand in hand, but for me personally I have found that its easier to think of unique ways for the player to interact with the protagonist first then to come up with some crazy artistic design to match the game play second.

From the very start I wanted The Untold Legacy to be different from other games while feeling familiar due to its various influences. As you may know TUL was inspired by The Legend Of Zelda,(and many others) however we didn't want to carry the games flaws on into our title, this was our game after all and we still want to improve upon existing ideas and make something unique. One issue that I personally have always felt (with the Zelda series) was that the unique items are vastly under utilized outside of the dungeons they are required for. The items in Zelda are typically found in a dungeon and used throughout the same dungeon to solve puzzles, defeat some enemies and the boss. Afterwards the vast majority of these items are forgotten and almost never seen again despite incredibly solid designs. To be fair a lot of this is addressed in Zelda: A Link Between Worlds for the Nintendo 3DS, however the magic of exploring and finding these items are lost due to you being able to rent/buy them from the start of the game.

Items In An Open World / Building A Compelling Story

Through our thousands of hours of meetings we have really gone to great lengths to try and rectify all of these issues. The very first thing we had to account for was TULs open non-linear world. We knew that we wanted the players to be able to explore and do as they wished for the majority of the game, while also having a strong design/crafted experience that wouldn't take away from its open nature.

This led us to be incredibly careful as we went forward and thought about how we would be introducing items and weapons. We didn't want items to be conveniently placed in a dungeon and definitely didn't want the player to just visit a store and purchase/rent them. This approach worked but it took away the fun of exploration and the reward of discovery. If the player is exploring to find chests of money so he can buy/rent the items he needed than why not eliminate the middle man? This caused us to come together and create our own system that in the end is more work, but work well worth the effort.

Our solution was to make the game even more about the open world and the journey of the hero. We felt that no hero starts off rushing into a castle or dungeon for that matter and began destroying monsters, instead it would be a gradual journey. You have to crawl before you can run right? Our protagonist would instead set off into the the world of Loomia, help its inhabitants & gain the skills, items, weapons & abilities necessary to face all of the threats ahead. We drew inspiration from games like Majora's Mask for this as the game is filled with items (masks) and Termina is also the most fleshed out world in the Zelda series (in my humble opinion). Each mask you collect is connected to specific characters and these characters all have very compelling stories that fans still fondly recall to this day.

It is our way of killing several birds with one stone. Key Items would be found in the world via exploration or quests that would involve compelling stories that relate to whats going on within Loomia, while also painting a detailed picture of the inhabitants and their lives. The protagonist would be actively evolving, becoming more immersed through quests & also gaining the tools needed. All of this would then be used to successfully complete puzzles, dungeons and defeat enemies/bosses placed throughout the world.

With items, weapons, armor & abilities acting as the rewards for exploration we knew we would want to utilize them at their full potential throughout the game. We continued forward as we designed all the rewards (items ect) and how they would interact with the environment.

A great example is one of the first abilities you will get through Shieldpa! Now for those of you who dont know Shieldpa is your companion through out the game. What you may have not known is that he will utilize & unlock abilities to help you during your journey. We didnt want him to be dead weight and just being a shield wasnt cool enough for us haha. You will be able to throw him (Captain America style) and be able to teleport to swap places with Shieldpa. This ability will be utilized through out the game in various environmental obstacles to get to places you could otherwise not reach while also acting as an effective strategy when fighting enemies. Abilities like this are actively in our minds as we sculpt the games world so they will be continuously utilized through the course of the game.

While items, the world, quests and puzzles are intricately connected we knew we would need to do the same with other aspects of the game. This brings us to the enemies! I knew that I wanted the enemies / bosses to be unique & fun to fight, our solution was to make combat fast & unpredictable while also including the rewards (items, abilities ect) as useful solutions to defeat each of them. While "most" enemies wouldn't require a special tactic to defeat them, having the said item/ability would make the obstacle much easier to overcome. Keep in mind this game is not meant to be an easy one, my hope is that it will be satisfying and rewarding to overcome each obstacle.

I set out to write this update and talk about enemy design but quickly found it difficult without really talking about all of the other elements in the game. As you can see it is all connected as I believe it should be. As I continue to design enemies I do so by thinking about the tools at the players disposal. At any given point the player could have a certain item, skill or ability & I want to utilize these in unique ways that will help the player overcome the threats he/she faces. This way nothing is under utilized and it keeps things fresh while the player is on his toes.

For example:
The player can grab and pull objects. Why not allow him to grab an enemy and pull him? I have always felt that the more interactivity the better. You can already see this idea is being implemented in a couple of designs.

In this enemy you can see his tail has a circular shape (and this could change) but the idea is that when the enemy tries to attack you can dodge him and pull him by his tail. You could use this tactic to pull the enemy into a hazardous obstacle for massive damage or you could potentially slingshot something back into him after stretching it out. If you try and keep in the mind the various tools at your disposal the possibilities quickly seem to be endless. 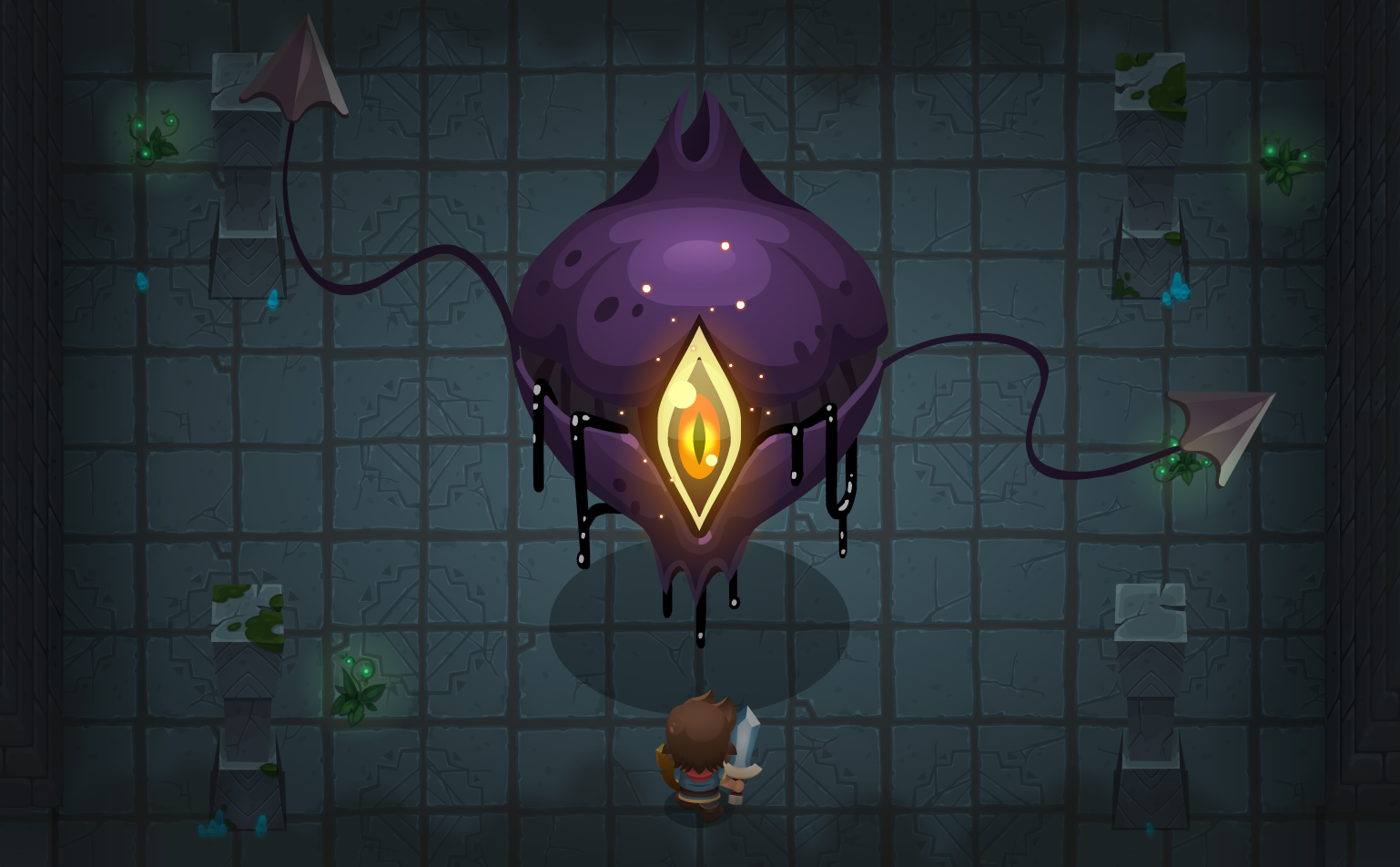 Here is a boss that will be featured in the game. As you can see he has long tentacles with blades on the end. I actually began designing this enemy purely by thinking about design and thought it would be cool to pull on a "tentacle" and cause it to rip off. From that simple idea this enemy was born. When this enemy attacks you will be constantly dodging and blocking so you can survive. Out of that frustration he will attempt a powerful attack and if he misses he could get that tentacle lodged into something, which intern allows the player to pull on it, eventually tearing it from its socket.
Its a small detail but one that adds some depth.

Another enemy we have been working on is the Troll Brute. The player can climb obstacles and jump in the game so it just seemed natural to be able to do that with enemies. One early example of this is the troll brute. The enemy is no doubt powerful and definitely one you wouldn't want to take lightly. In the game trailer you can see that when he rushes the player you can jump onto his head to stun him. 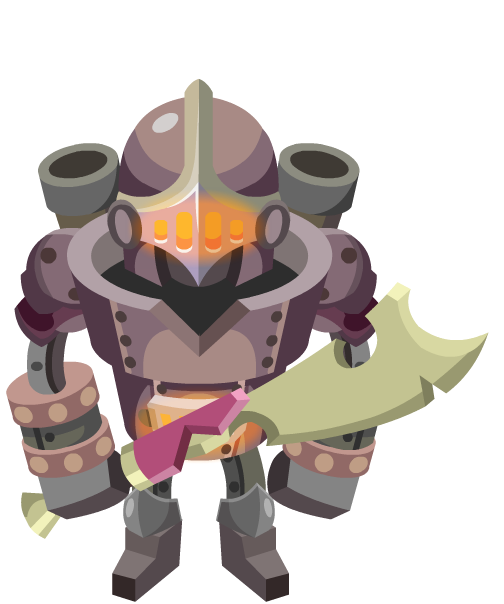 The last example I will use is one of the first enemies I designed. In fact he actually is on my list of enemies that I intend to polish since the game has evolved so much and the artistic style has improved. This is the Steam Knight (name pending). As you can see he has pipes on his body and and a several vents on the front of him. He was born from the idea of the "Phantoms Mask", this is another item that is actually featured in our game trailer. You can actually use the Phantoms Mask to disappear into smoke which makes most enemies unable to see or harm you. While in this state you can also travel through obstacles you normally couldn't (bars in a cell, vents ect). You can also do various things with specific enemies. The steam knight is the first of many. By utilizing this ability you can actually be sucked into him through his vents which allows you to control him for a short duration.

In a nutshell this is our thought process for developing the games enemies, quests, puzzles and items. Let us know what you think and if you have any questions or suggestions!

For those of you who dont know we currently have a live Kickstarter! If you think the game looks cool be sure to check it out and back us. We would greatly appreciate it and we would be 1 step closer to making this game a success.
You can do so by following the link HERE.

We also have an active thunderclap campaign ongoing. Dont worry its completely FREE and for you to support us its realy easy. Basically this allows us to spread the word via contributors who sign. If we hit our goal (100 supporters) a message will be sent out with a link to our game. Its a great way to share our project and get people interested. If your a fan of what we are doing check it out HERE.

Lastly make sure to sign up for The Untold Legacy Newsletter. Its at the top of the page. From there you can follow our games progress and stay up to date with demos and the various alphas we will offer.