Took a little longer than expected but here's the dev diary #4.

Hey guys! It has been a long time since I last wrote a dev diary! Thankfully, this is due to how full our hands have been with big improvements, progress, and excitement with the project, as well as managing the bustling alpha test server (more on that later ;)). Sadly, the dev diaries have been neglected a bit in favor of using the Discord channel for announcements and general communication. Feel free to join us if you want to get closer to realtime updates!

In the time that has lapsed since the last dev diary, we have received a lot of press, a ton of interest from both former players and those new to Hellgate, fixed many bugs, released many updates, started and exited pre-alpha, and gone full-steam into a closed Alpha phase.

As you will see and read below, the development team has made major strides towards a stable, rock-solid, classic Hellgate experience. We are super excited for the future of the project, and are encouraged by the thanks and appreciation we receive every day for our hard work on London 2038.

As the community has grown (for example: we have a few thousand members in the Discord server now), we have also grown the London 2038 administration team. So towards that effort, I would like to formally welcome to the team our newest Community Managers: UniqueRelic (you may see her with some variation of "Meow" in her name, she likes to change it constantly), HeWhoHunts, and ToshiNyan. They have been great additions to the team and we couldn't do it without them! Just don't get on their bad side, they are worse than me with the banhammer! :D

I mentioned in my last dev diary that we had added SanGawku to the development team--he has since made some great contributions and continues to be an asset to the team. Additionally, the venerable NiteHawk, steward of hellgateaus.info himself, has lent his skilled hand and mind to the development team and achieved great things! We are lucky to have such a dedicated, passionate, and funny team, and I am grateful to be surrounded by smart people while we bust our butts getting Hellgate multiplayer back to where it deserves to be.

But enough textwalls... Here are some awesome screenshots and videos by testers and community managers. Big thanks to Alternalo, ZuranOrb, Justin, Dreez, UniqueRelic, Bryan, VampQ, and all the others for these images and videos! 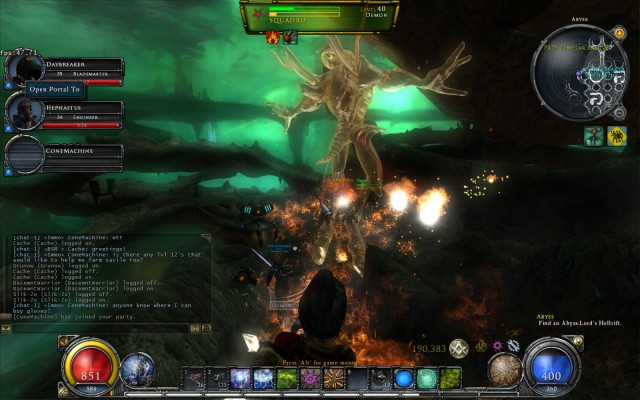 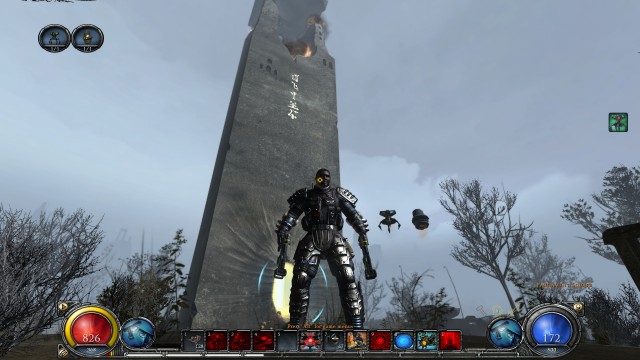 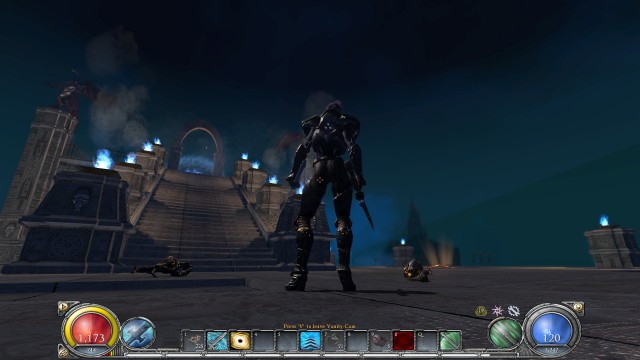 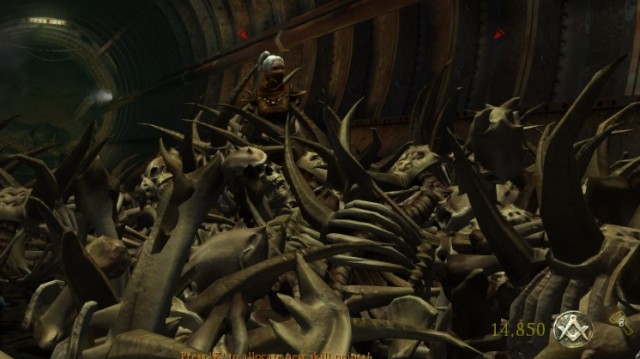 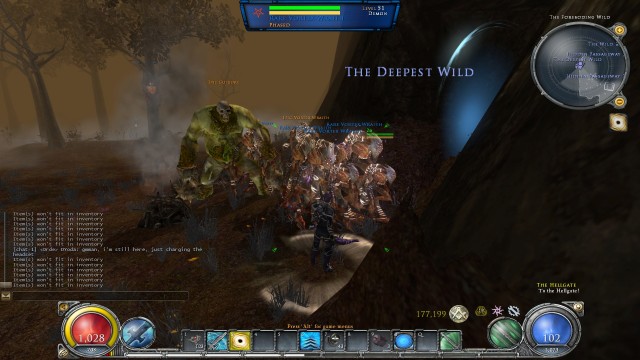 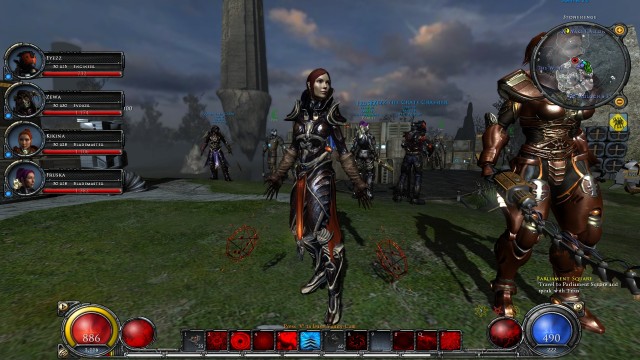 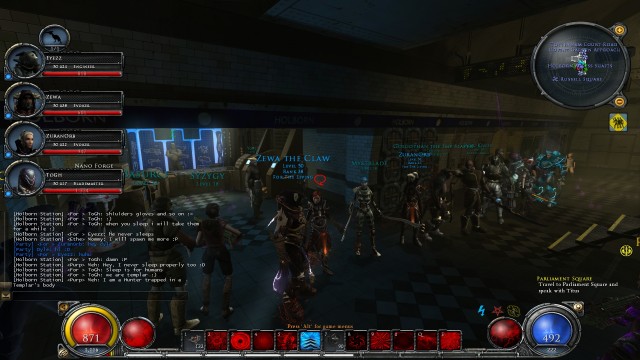 You may be wondering at this point, "Who are all those people who get to play Hellgate?!". Well, since late January we have been slowly ramping up a closed Alpha test. As of last weekend, we have over 800 registered Alpha test accounts! We have carefully chosen these testers to help us rigorously test our server, including all its warts, and help us hunt down hard-to-reproduce bugs and glitches. Their characters are temporary, and are wiped clean whenever a patch is made. Their progress will not carry over into the Beta stage, and most certainly will not carry over into the game when we go live. We truly appreciate the time and effort our testers have put in (even when I have to spank them occasionally for testing boundaries ;)) and we look forward to growing the testing family as we continue to deliver a stable and enjoyable multiplayer Hellgate server. You can find the alpha application here. There is some responsibility that comes with testing, so please read the form and the agreement carefully if you intend to apply!

The team has been working at a furious pace on fixing the major bugs that still exist in the game, and has made major strides forward. The lists below are not exhaustive, because we have made so much progress and have had amazing alpha testers reporting previously unknown issues. MarCNeT has finished a marathon of programming to get some tooling finished which allows us access to the inner workings of the game data; MMan lent his massive brain to help solve many tricky issues; NiteHawk got Champion Mobs working, continued work on the Consignent House, and helped massively with the readiness of the Abyss expansion; SanGawku added changes which massively increased stability and single handedly developed a tool to make my life 100x easier when inviting Alpha testers; and last but not least, mcenal dug in to the server to work on tools around server and player management.

One of SanGawku's fantastic contributions since the last dev diary has been to write a tool for us to easily select and invite alpha testers--it generates the invitations, accounts, passwords, emails, etc. As I mentioned in the last dev diary, we are working on a dedicated london2038.com website. This is still the plan, and now we plan to migrate the features of the account management tools into the new website, so going forward testers (and eventually all players) can apply, be accepted, and manage their accounts in one place online (including changing their passwords; yes, I have heard your cries about long auto-generated passwords ;)). In addition to some account management tools, the new website will feature an up-to-date skill tree/skill calculator which will accurately reflect the state of skills in 2038 so players can experiment with builds. Furthermore, we will be launching a wiki so that testers (and all future players) can collect knowledge and tips about the game in one place.

What Doesn't Work/Is Being Worked On

We are hot on the trail of an open alpha. We need to address some of the biggest known issues, and nail down some existing issues in the recently-released Abyss expansion, as well as continue to improve our tools, but overall the server is extremely stable (very, very high uptime and generally good ping/latency for players in both Europe and the Americas). We expect playability to accelerate, as well as our overall insight into the mechanics of the game to improve due to our ability to decrypt the game data and assets completely. Please keep your eyes peeled both here on hellgateaus and especially on Discord to keep up with the latest developments. Thank you all for your support!

Holy cow, this is awesome. I do have to ask hows the single-player side of hellgate running? either way thanks for the hard work and keeping this game alive.

This project doesn't change SP at all, that's still up to modders. The vanilla SP is still the same as it was with FSS patch 1.2.

If you wanna try the mods head to Hellgateaus.info

Excellent work, keep it up!

You know! You guys rock! I have always wanted to just sit in my comfy chair, and play HGL until someone came and peeled my corpse off of it. My dream will finally come true, thanks to you! I love you guys. I'm in love with you guys! And I want to have your babies!

Sorry but only Avalon may have my babies :P

Hi, i saw on video where you have activated 2 auras at same time is this things avaliabe last 1.5b patch or in next uplouad your great work.

I have an idea if you can creat some system for online multiplayer based on Tunngle program - there is many games with dead MP servers and Tunngle did great things about it ;)

This is a multiplayer project my friend :) Read the rest of the articles and the FAQ :)