First Dev Diary, in this dev diary we say about current development progress!

Welcome to our first Dev Diary after anniversary!

We have not thrown news for a long time, sorry us for this. In fact, we are actively working on the mod than ever. Many new people in the team, many tasks, everything happens very quickly and there simply is not time for posts.

Briefly about the development news:
1) We were able to adapt our branches of technology to features with the modernization of technology from 1.4 and decided to completely abandon the modernization of technology for experience points. Army glasses will be needed solely for the formation of brigades, and for which we are still thinking about spending fleet and aviation fleet points. This decision is due to the fact that in modern times, even in the conditions of total war, modernization will be based primarily not on operational experience (as in the Second World War), but on technological superiority. Thus, we decided to do so - the technology of each generation will have 3-5 upgrades, allowing it to reach the technological level of the next generation. Those. In 1982, the US can begin to rivet the LAV-25, having only LAV-300 experience in the form of experience, and the USSR is to continue deep upgrades of its old BTR-60 and BTR-70, which will be slightly worse, but generally acceptable competitors, , That the USSR has a doctrine honed for such a technique, and the United States does not. Now we are all scripted and soon we will show you the result. The topic is Anatoly Masin, Andriy Nikolaichuk, as well as the whole group of technical analysts. Probably soon in the ranks of sceptres on this topic will be replenishment.

2) We finally started working on the map. Two of our new scripts have started working on pilot regions (not yet the first in importance, but complex ones), and analysts who help the project prepare the initial data for them (the Caucasus is already well made in the Balkans process). Below is an example of how Southeast Asia was made. By the way, with analytical work on the map we need help - if you burn with desire - write. The theme is dealt with by Gleb Leo, Sergei Nekrasov, Huseyn Gafarli.

3) We almost finished the pack of 3d models of the Bundeswehr. There was only a truck for them - the Mercedes-Benz Zetros Military Truck and the G36 rifle. Soon we will introduce you the entire pack of Germans. Slowly we squeeze problems with old models, such as heterogeneous textures, lack of normals, animations, incorrect national "schemes" of 3d models, binding models to units, etc. The theme is dealt with by Alexey Kuznetsov, Petro Standret, Alexander Onufrienko, Iwan Anashkin, Vladislav Tuesnikov.

4) Almost completed the political model associated with the ideologies and "hard" of the regimes - created strategies for the behavior of AI - authoritarian and democratic, they are exhibited at the start of the main countries. Now the AI ​​behaves relatively adequately when changing ideologies. However, so far, many events have not been adapted to the new system and the tree of focal points of the minors has not been brought. This task is becoming one of the highest priorities for us. The topic is Maxim Belkovsky.

5) The development of a model of religions is progressing successfully, suggesting that relations between countries will be affected by the predominance of one religion (or vice versa). The bottom line is that every region on the map will have a parameter of religion, professed by the majority of the population. If in a country a significant part of the population profess a certain religion, you can lobby it through the laws, or make it through the same state laws. The whole model should ensure the conflicts of Sunnis and Shiites, Muslims and Hindus in India, and also influence the coming to power of the ideology of Islamism. If there are no Muslims in the country, then there is no Islamism either. Perhaps in the future we will come up with how to connect this topic with the laws on migration. But until this is done. The topic is Dmitry Gongalo.

6) There is a scripting of the branch of infantry equipment with our unique model of "accepting" various units of various additional elements of equipment. It's a pilot - in 0.6.1 we want to see how well it will fly. If the players like it - continue to develop the topic, no - simplify. The theme is Gleb Vasyagin, and Igor Donchik is harvesting the last icons for the branch.

7) Pre-finished (hurray!) Focuses of Ukraine and focuses of the Russian Federation, scripts and alternatives to the civil war in Ukraine are finalized. Now all this is tested and combed. These scripted by Suxrob GM, the structuring of events for the preparation for the translation of Dmitro Tsegelnik, the tests Dmitriy Shamanov.

Another important thing is that we became more active on our channel in Discord (Discord.gg). In connection with the VK ban on the territory of Ukraine and the problem of 100500 dialogs of the development team - our General Staff was moved there. Join in;)

Well, a screen with Southeast Asia. 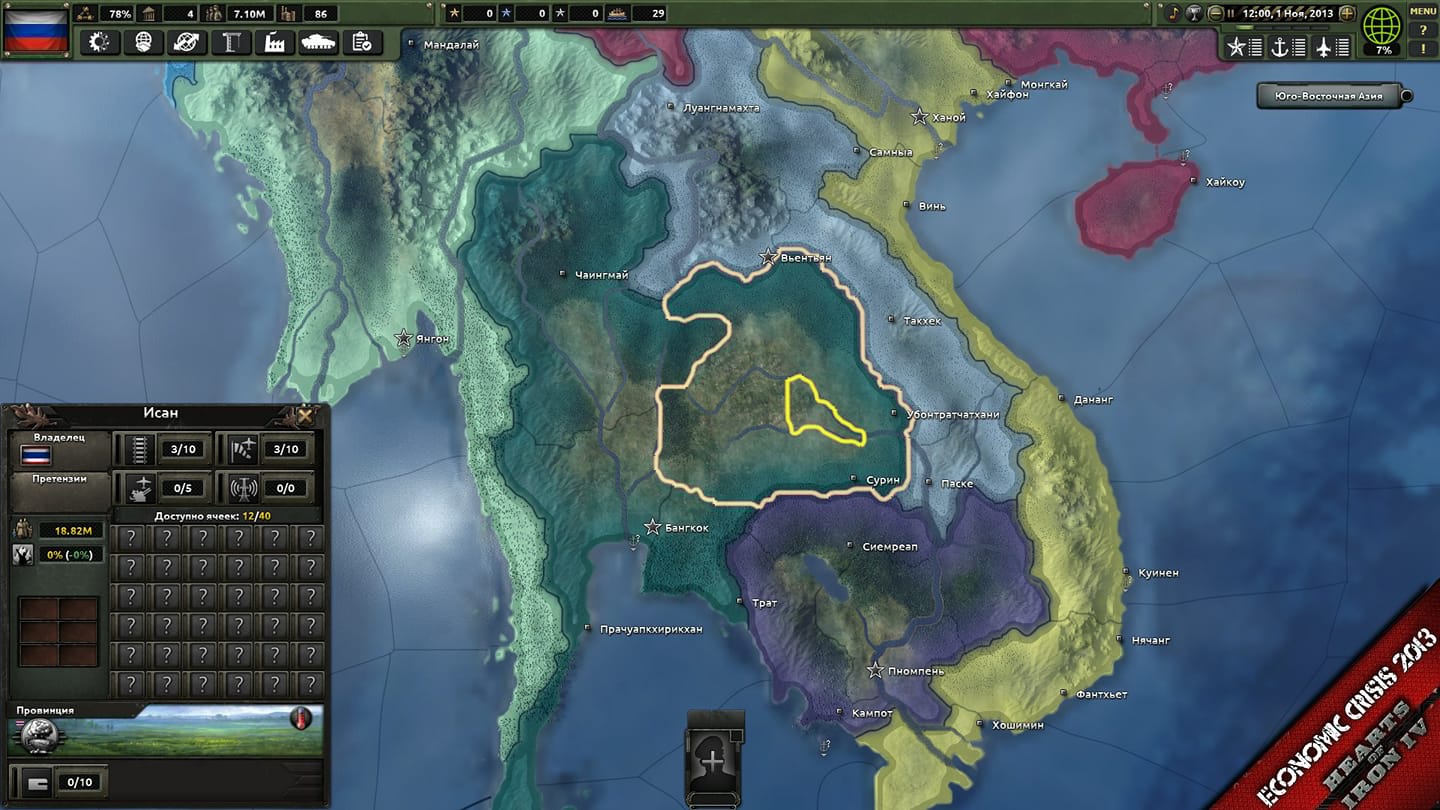 I'm sorry but I found the dev diary difficult to read and understand.

Sounds great! definitely love the implementation of religion. How will you show the influence of a religion in a region? with a pie chart as politics or something else?

Just a how many starting dates you got and if so please when do they start cause it will not harm you if you tell us,right?