3d artist Deforges gives an inside look at the work that goes into Battlecry assets.

Hey Battlecry fans! I am 3D artist Deforges, otherwise known as Joseph. I'm here to talk to you about my part on the team. I am mostly responsible for the weapons but have also made some of the props that you’ll see on the battlefield. I also run our twitter page! Without further ado, let me present my workflow in relation to Battlecry from start to finish.

Reference
One of the most bittersweet things about working on Battlecry is reference. Everything in the star wars universe that anyone has seen is just one artist’s interpretation. The A280, for example, looks different across the many films, games, and comics it was depicted.

This lets me have a lot of freedom when it comes to choosing what I want the end result to look like. I also have to keep in mind what will be practical and I want people to be able to recognize what I’m making when they see it. As a team, we try to base a lot of the looks of the models off the movies and Battlefront games.

Modeling / Texturing
The first step in my workflow is making the high-poly model. I rough out the model, add supporting edges, and subdivide the model which creates a lot more polygons that each hold their own lighting information. After creating each part that makes up the model, I save another copy for what will be the low poly model.

I speed up the process of creating my low poly model by using modifiers in 3ds max. I go through each part of the model and remove the turbosmooth modifier which is used for subdivision, and also an extra edit-poly modifier which holds all my supporting edges. I then unwrap and begin texturing the model. 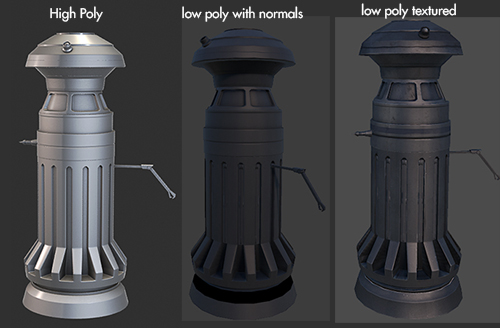 It’s easy to get carried away with sci-fi assets and make them look unbelievable. A good thing to remember is that a lot of the materials things are made of hardly change. Therefore, the textures we use are trying to recreate real-world surfaces like metal and rubber.

Another subtle thing I try to bring through in the textures are damage. The imperials being the industry supported force they are, have weapons in much better conditions than the rebels. You’ll notice that rebel and common models are more damaged and worn. 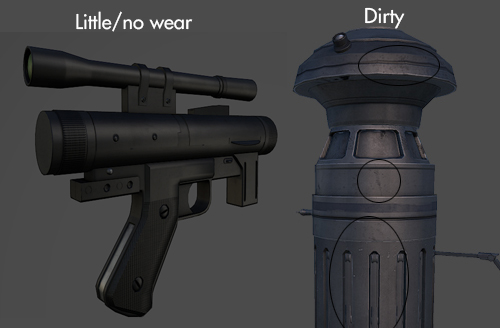 Finally, after all the textures are complete, it’s time to make the model shine! I use the marmoset engine to preview what the asset will look like in real-time inside a game engine. After everything is approved, the model is exported for use in the game engine!

I hope you enjoyed our first dev diary! We’re looking forward to showing you our progress and hope you will enjoy our next update (coming in February). We will hopefully release our first alpha later this year which will be open to everyone. In meantime, follow us on Twitter or Facebook to be the first to know Battlecry news!

i need to learn how to use 3d programs... This looks great!
looking forward to next :D

Keep up the good work. B)

Also, the equipment in huge space ships should be clean because they would be easy to clean them in an environment like that.

I liked reading through this, keep up the great job guys 'n gals on the StarWars BattleCry Dev team =]

Nice work and workflow, now you said you use the marmoset engine to preview your models on how they will look on a game engine, that is good indeed the problem is that no engine is alike so what looks good on Marmoset could look not so good on Cryengine so ultimately you should always preview your models in the engine you will use them on.

This has been brought up before but the real issue is that marmoset uses a specular fresnel that can alter the look of the model dramatically. I turn this setting down when I'm working and the end results have been identical in-game, in marmoset, in xoilul shader, and so forth.

amazing keep up the good work!