This will be the final post about creating gods for Okhlos! Over time, we will be doing a lot of stuff with the gods, also the designs may suffer some changes, but the initial concept behind them is the pillar of what will come next. This means that you can expect more things about the gods in the future, but they will be oriented from other angles, like level design, technical stuff, etc. (also, maybe next week will do a recap of the selected versions of the gods). So, lets start with...

So I started with a surfer approach. I thought of him, as cool as a mutant turtle saying cowaboonga (kind of 90's cool). Long hair, party type. Later, I thought that it wasn't exaggerated enough, and I had to push some more, so then I went for the Hippie look. I liked a lot the idea of making him a Hippie, they had music, drugs, wine, everything. I loved the bearded version of Dionysus, until Sebastian pointed out one of the most important aspects of the god. The hippies are all love and peace. And Dionysus is all disarray, chaos, and a little bit of angry.

From there, I felt in what would be the more fitting attitude: Punk. So, yeah, we have a Punk god, who plays the lyre very hardcore. 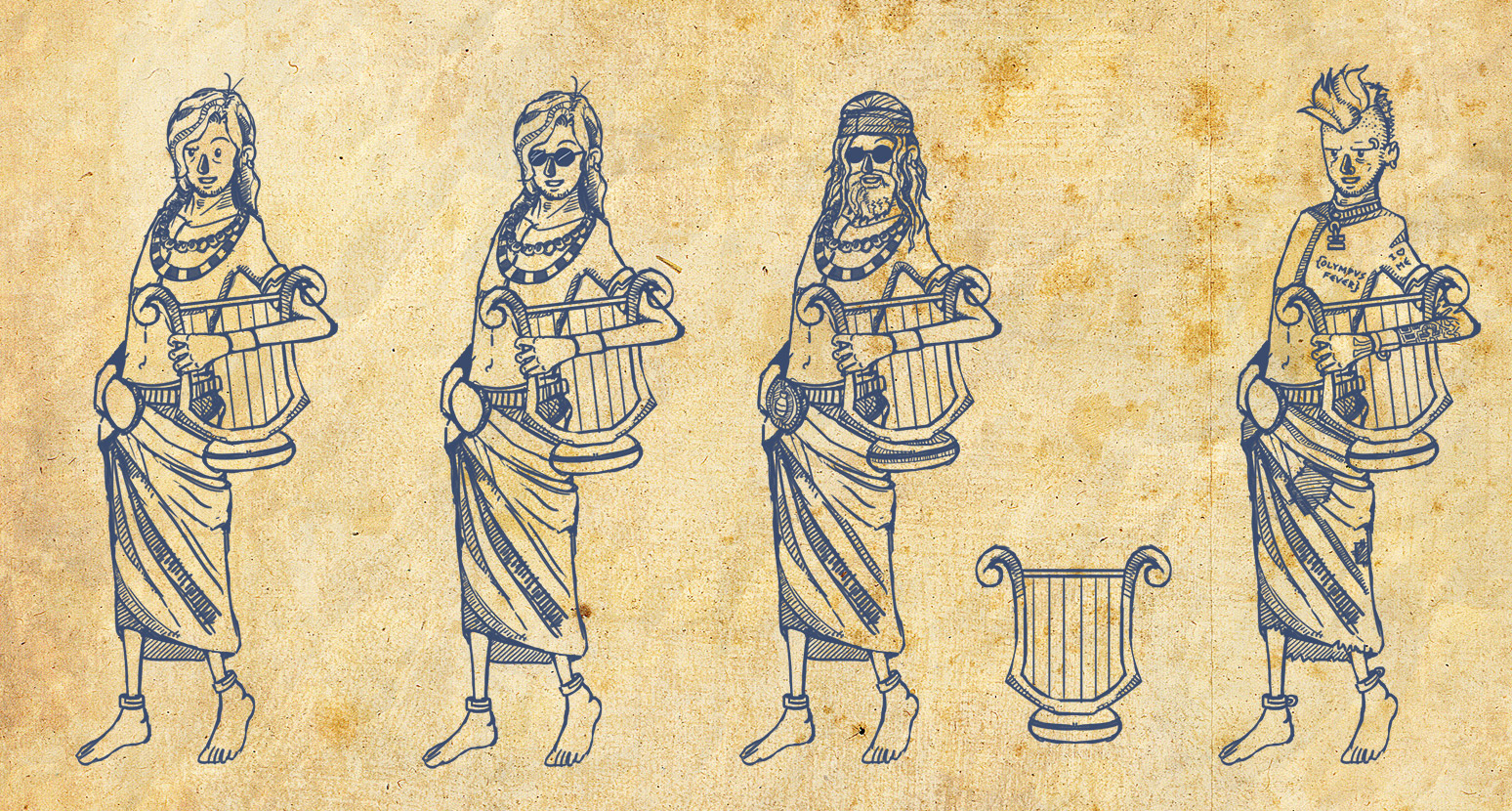 Hermes was almost the most difficult god I had to make (spoiler, Zeus was/is). I went through very different concepts, until I found some ground.

What I had: Wings, a bag, some cloths hanging to make him look quick when he runs. The initial concept (from the first update, when I made the whole bunch very quickly) was good, but very typical. Also, I hate Jay Garrick's hat very much, which is a petasos. I had a hard time drawing it in a natural manner (you will see that later concepts have the petasos in the back). The first Flash has a petasos which is kinda of a military helmet and that's not a good reminiscence for our character.

I had to do an awful amount of Hermeses (as with all concepts here, you only see a selection of the drawings) and none of them felt godly enough. It was when we added the Caduceus that he gain some bearing.

Apart from the petasos, the other problem was the he was not only the god’s mailman but also the god of athletes, so my first idea of making him very skinny was not very good. Eventually, I put him some flesh but I stayed a bit reluctant of putting more, so as not to lose the design constants of the characters (after all, they are a little bit cartoony, they don’t try to be realistic in terms of human proportions).

The final tiny problem was the hair. Sebastian thought it was too much anime-like, so I made a few versions with much shorter hair. There is also a version which has a safari hat. Searching for mailmen to inspire the petasos, I found Jake from Adventure Time as a mailman with that kind of hat, and I quite liked it.

Fun fact: The petasos it's like the one that Oedypus has.

Posidon (whithout the E because Poseidon is too mainstream) was the most straightforward and easy god to make. Posidon’s concept was very clear. Water and eastern robes. There were other things associated with him, like the horses we mentioned on the first part, but they were not so important to the god’s look as they may be to his behaviour or the design of his city.

Also, another thing that accelerated the design was the fact that he will have half his body under water during the fight. That gave us the liberty to do whatever we wanted with the bottom half. The underwear fit perfectly, and we think that maybe during some attack, or after he is defeated, the player will see it but first we have to design the temple in which the player will be facing Posidon. Also, having one croc was cute.

The other designs I tried were either too chinesy or too piraty (not on the screens). Making the crown was the most tedious part. He is the only god that has a crown, so we wanted something organic and which didn’t look so much like a crown. Also, we didn't want to fall into the coral trap, having the little mermaid's under the sea look. So we kept the sea references to an indispensable minimum.

He was the most annoying god to make. We wanted to be fresh and original so we were friends of the idea of making him lose the beard. The white hair felt good, not because of his age but because we wanted him to be pure divinity. Also, we didn’t want to make him old. He was the younger of the three brothers, and early sculptures depicted him as a middle age man.

This brought all kinds of problems, it was so different from the popular conception that it ended up not looking like Zeus at all. We even tried some kind of Muay Thai boxer thing with white hair, and stranger things happened.

To make him more serious, we tried to whitening his eyes with bolts of lighting. This is something we have planned for different types of attacks from all the gods, so we couldn’t make that a design characteristic of Zeus.

I was quite happy with the last two results. They were very unique. Unfortunately, here comes again Sebastian to point out that they felt a bit Egyptians, and the dreadlocks didn’t help a lot with the ethnicity.

So I tried different types of long hair (I don't know why, but IT HAD to have long hair), also, we gave more importance to the laurel wreath and made it golden to integrate it better with the rest of Zeus ornaments.

Finally, I tried a more traditional hair style from those times, but again it didn’t feel quite right.

So, sadly I still have some work to do with the hair, but I think the rest of the body and the clothes are fine.

Well, that sums up the process of making the gods. It's super cool having to draw a lot, but making concepts doesn’t give you the feeling of progress in the project, at best it gives you some rules for when you have to do the actual in-game graphics, which is really cool and necessary, but it's not in-game progress.

We don't know yet which kind of update we will be having next week. Maybe something technical from Sebastian or maybe which the definitive concepts that we will be using for Okhlos will be.

Stay tuned and find it out!

I really enjoy these concepts updates. I specially liked the idea of letting the player see just a glimpse of Posidon's underwear, I think I would burst out laughing if I saw it unexpectedly during gameplay. By the way, give the man a mustache! He would look really awesome, but maybe he would look too old from what you're looking for.

I also really liked the safari hat on Hermes, you should definitely stick with it. And Sebastian was right, that hair is too anime-like.

Those golden leaves on Zeus' hair fits really well. My favorite is the antepenult one.

Almost forgot, share the Posidon's piraty design, they must be hilarious.

Thanks again for the comments! The feedback really help us and keep us motivated!

Yeah, the hair thing on Hermes was kind of a bummer, but both of you are right. The safari hat is cool, but it's maybe a little out of context. I will try to keep it up!

I like that Zeus also, but I will try some more hair styles to see how it goes!

About the the piraty design, next week I will post the definitive designs, plus some of the weirdest and more border designs that didnt make the cut!

Again, thanks for your feedback! We really appreciate it.