I'm continuing work on boarding combat, which will be the major addition in the next release of Airships, according to the development plan.

Last time, I got to the point where air marines could teleport over to an enemy ship and fight the crew there. This disrupts the enemy ship's operations, with marines killing crew who would otherwise be busy firing at your ships. But marines should also be able to take over ships with enough effort. This was the next thing to implement.

Because airships are complex entities with a lot of internal structure, a takeover can be ambiguous: Imagine you're an air sailor operating a propeller somewhere in the ship. You can hear that there is fighting elsewhere, and after a while you get an order barked down the speaking tube by an unfamiliar voice: you are to turn the ship around. Do you obey? Seconds later, there is another, more familiar voice rescinding this order, the sound of gunfire in the background...

So crew will be at least somewhat aware of what's going on on their ship, and are unlikely to cooperate fully with any occupiers. Still, for practical purposes, there has to be a point at which the ship moves from one side to the other. So a ship will switch sides if its bridge(s) contain no (living) crew and at least one (living) invading marine. The original crew of a captured ship will only perform duties from self-preservation: they will operate suspendium chambers to keep the ship from crashing, and they will put out fires. Everything else will have to be handled by the invaders. 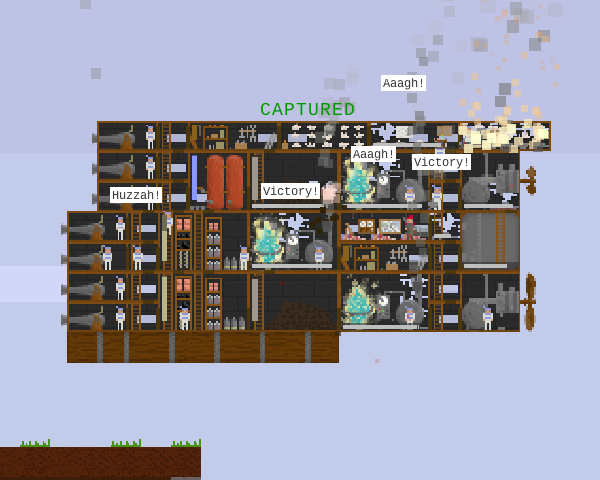 To effect this takeover, air marines will converge on the ship bridge(s) once they've run out of important strategic points to disable. The combat code continually checks the requirements for a side switch and executes it when possible. You can also recapture your own ship, and the crew will stop being in "occupied" mode and resume their normal range of activities.

Once I got that all working, it was time to tackle the other half of boarding: the process of actually moving from one ship to another, replacing the stand-in "teleporter" I'd been using so far.

Boarding an enemy ship happens in the following phases: 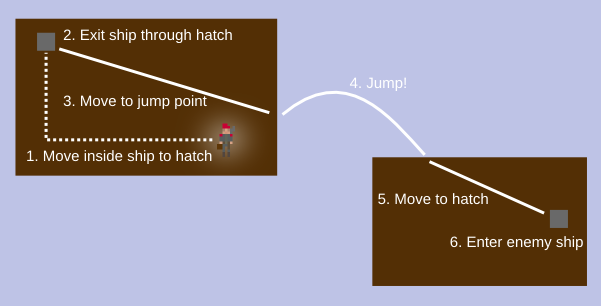 To get there, crewmen (marines) need to be able to exist outside an airship. As previously mentioned, crew normally exist on their ship's coordinate grid, which of course stops working when they leave.

To start, I introduced a new list of outside crew members. I decided to treat them differently from normal physics objects like ships and floating rocks, as they are able to move along the side of them, overlapping. Their simplified physics mean that they can move and fall down, but if they collide with a ship or rock, they hold on instead of bouncing off.

The exception to this is the ground, which they should not overlap with. Since there is only ever one ground object, I was able to solve this fairly simply: when an overlap with the ground is detected, the game moves the crew member back along his trajectory to neatly leave him outside of the ground. This would be harder to do if crew needed to be moved back out of multiple things. For example, if crew were also shifted out of airships, an airship squashing a crew member against the ground would pose a problem: he could not be moved out of the way of both of the ship and the ground at the same time.

Once I got this basic physics to work, I added a visual layer for displaying the external crew members and got started on the functionality for entering and exiting ships. To start, I ignored the planned restrictions that crew could only move through hatches or hull breaches and just... sort of let them phase through walls. One step up from teleportation, anyway. The actual code for making the switch was mostly a lot of bookkeeping - unregistering the crew member in one place and adding them in the other, translating in-ship coordinates to global ones.

The first time I tried out the code by giving the boarding order it turned out that I had forgotten one small thing: only marines should exit the ship for boarding purposes. Instead I got everyone shifted to the outside - in the wrong place too - with rather unfortunate consequences for the ship that suddenly found itself without a crew to operate it! 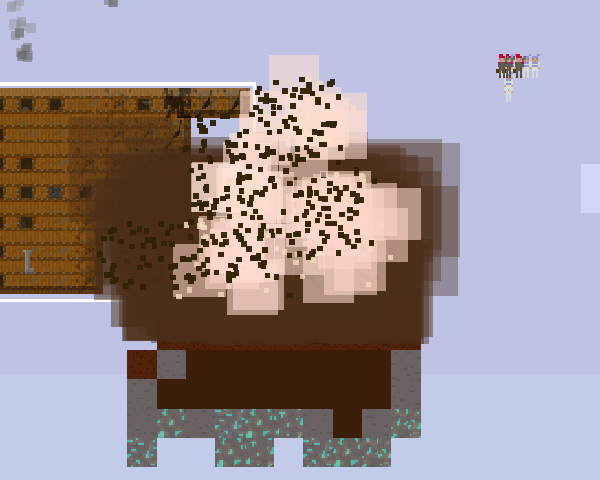 Having fixed this up, I had part of the boarding cycle working, but there was still a lot to do, especially the actual jumping across, which will be the focus of the next article.

Also, in exciting non-boarding news, Airships got nominated for the Swiss Game Award 2014 of the Swiss Game Developers' Association. Pretty pleased with that.

Looking good and solid, keep it up, i want to see it in action, maybe on the next update you can make a small video? :)

And congrats on the nomination.

Will do a video definitely. :D Just working on planning out the grappling hooks now.