Last Saturday six members of the Traction Wars Team gathered (some for the first time!) at TankFest 2015 at Bovington, Dorset, England...

Last Saturday six members of the Traction Wars Team gathered (some for the first time!) at TankFest 2015 at Bovington, Dorset, England. The combination of a team gathering and so many tanks, which ranged from the very first (and rather poor) attempts to the current main battle tank serving the British Army, the Challenger II was too good to miss.

Before launching into tales of our armoured encounters we first should attach a health warning to prevent an outbreak of excitement.

Armoured vehicles will not be included in Chapter One: Overlord. Sadly we have to draw the line somewhere on what is included in the first release and it was decided to leave armour out in order to focus on infantry in more detail and reduce the size of Chapter One to shorten its development. It's ironic that we spent the day at an event entirely dedicated to armour but it was too good an opportunity to miss for anyone interested in WW2/Armour as I'm sure you will all appreciate! 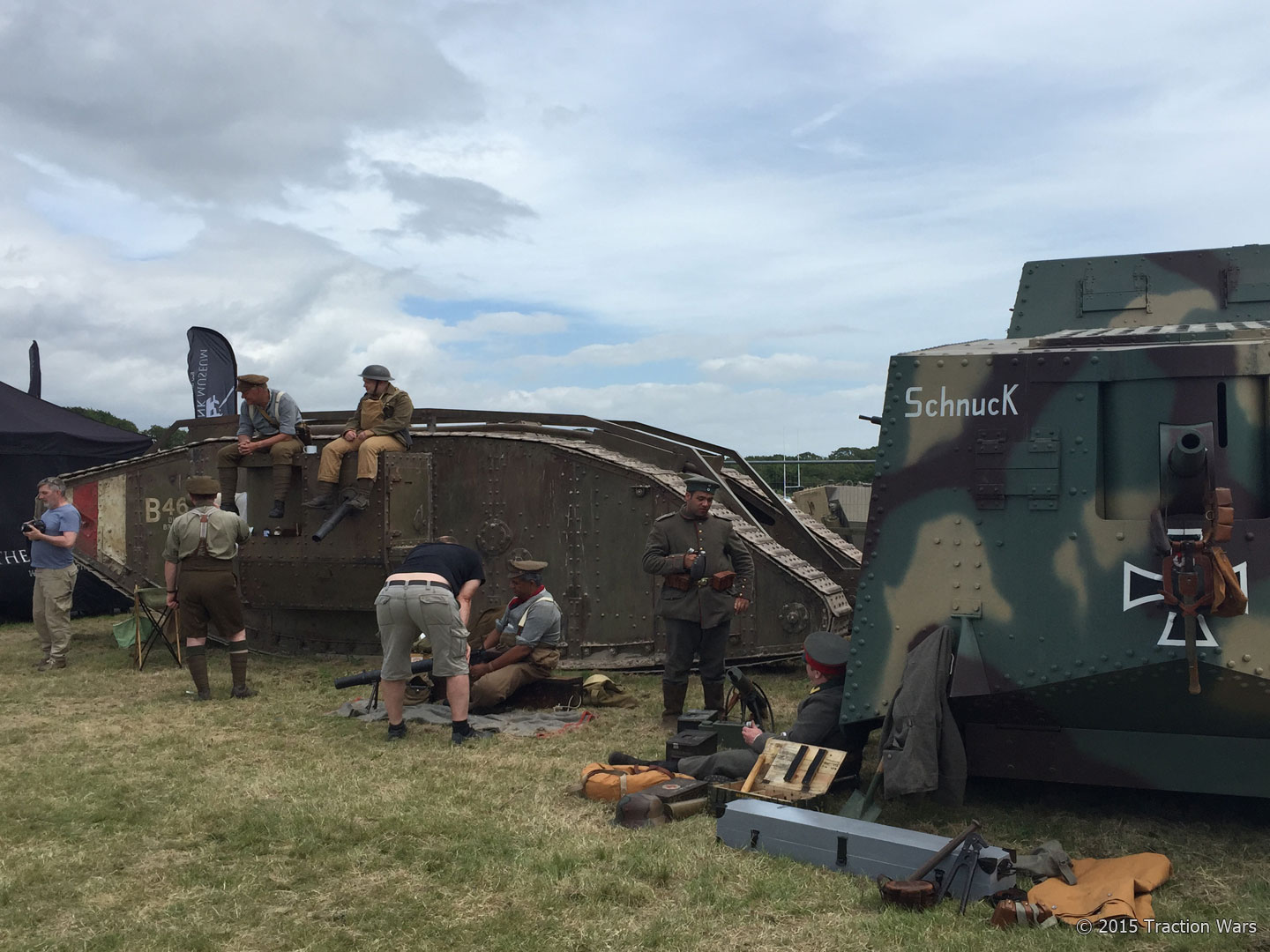 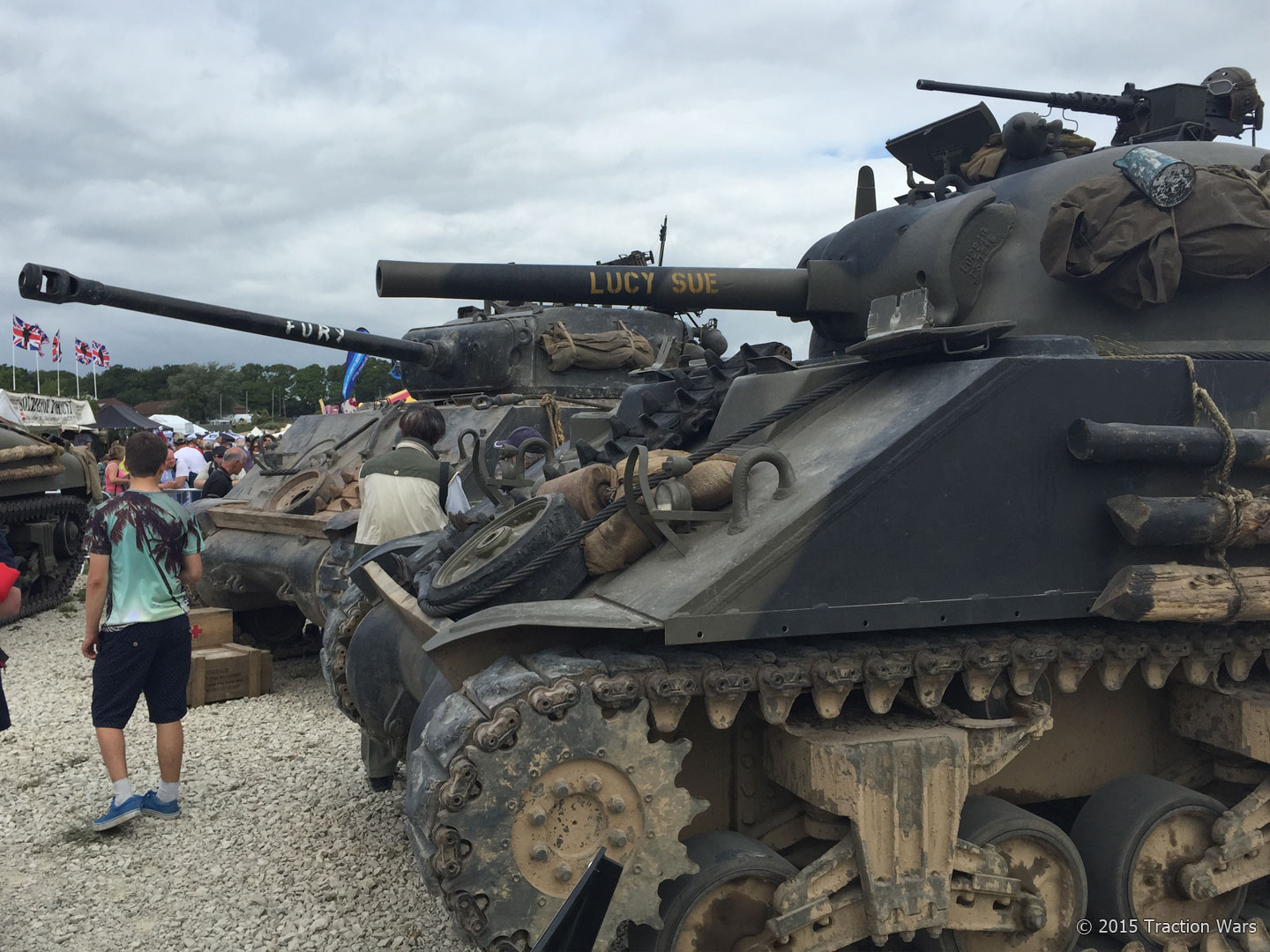 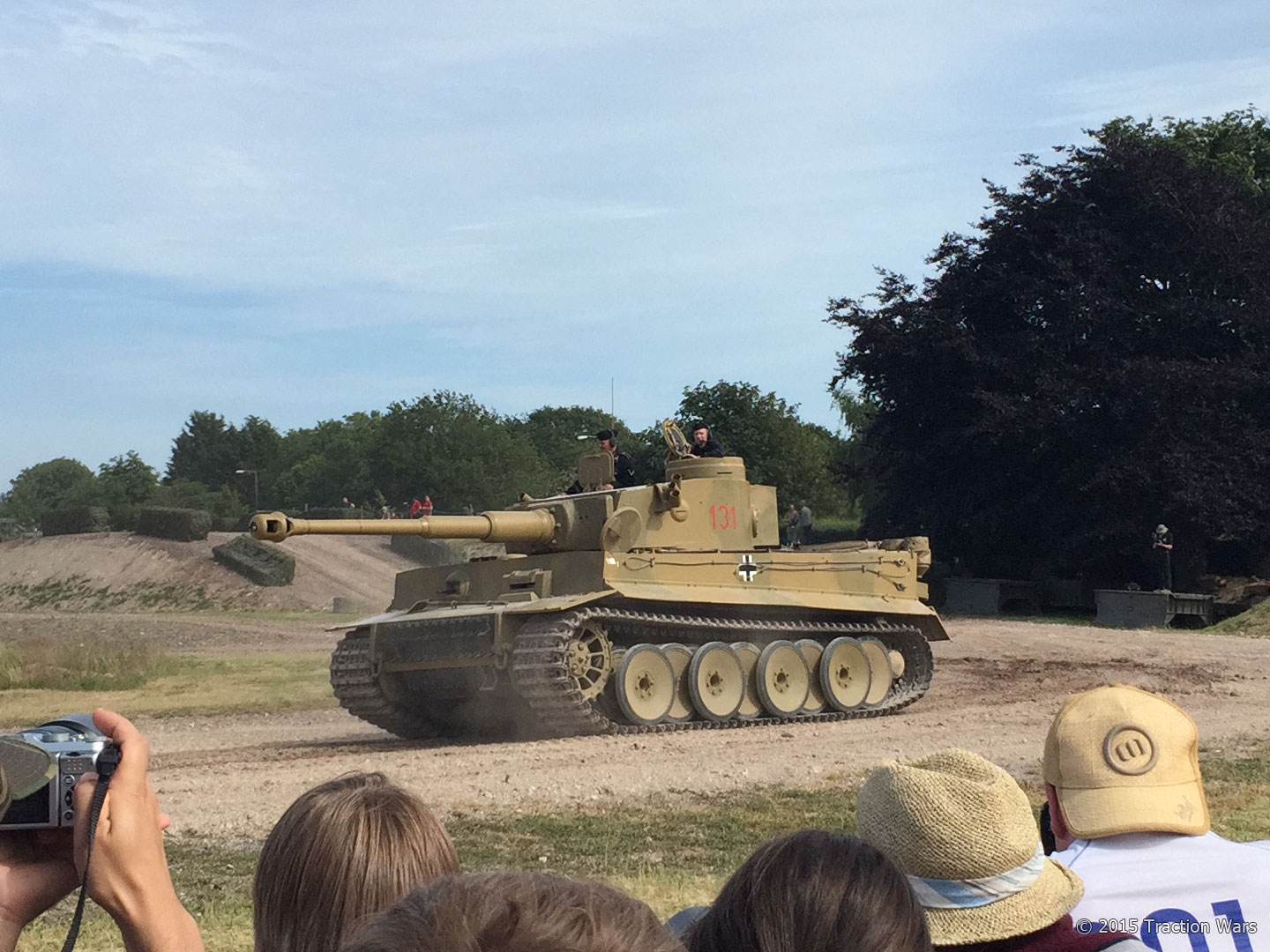 Tiger I No.131 rumbles around the arena

The day got off to a great start with our arrival at the venue greeted by a Spitfire Mk XI roaring around us as it climbed, dipped and rolled across the sky to its own unique and special soundtrack - a Rolls Royce Merlin Engine! Suitably enthusiastic we headed into the ground to walk amongst the armoured monsters. There were too many to mention individually but we could not leave out (probably) the most famous tank in the world - Tiger 1 No. 131. It's unusual to be able to get see such rare examples of WWII armour as the Tiger I but to hear and see one on the move is very special.

The live action in the arena culminated in a mock battle between US infantry with three Shermans in support vs. German defenders supported by a Panzer III. Opening with a sound of aircraft overhead and smoke, the German defenders put up a fierce resistance to the advancing US troops. Victory seemingly in their grasp the US were put onto the defensive at the arrival of Tiger 131 which was eventually disabled after a moving duel with the Sherman "Fury".

Whilst of course the event was an incredible opportunity to get up close to some of the most iconic pieces of armour in the world, the event was also a valuable opportunity for members of the team to discuss face to face the development of the game, both specifically what’s going on at the moment behind the scenes and planning out in more detail the future features of the game. 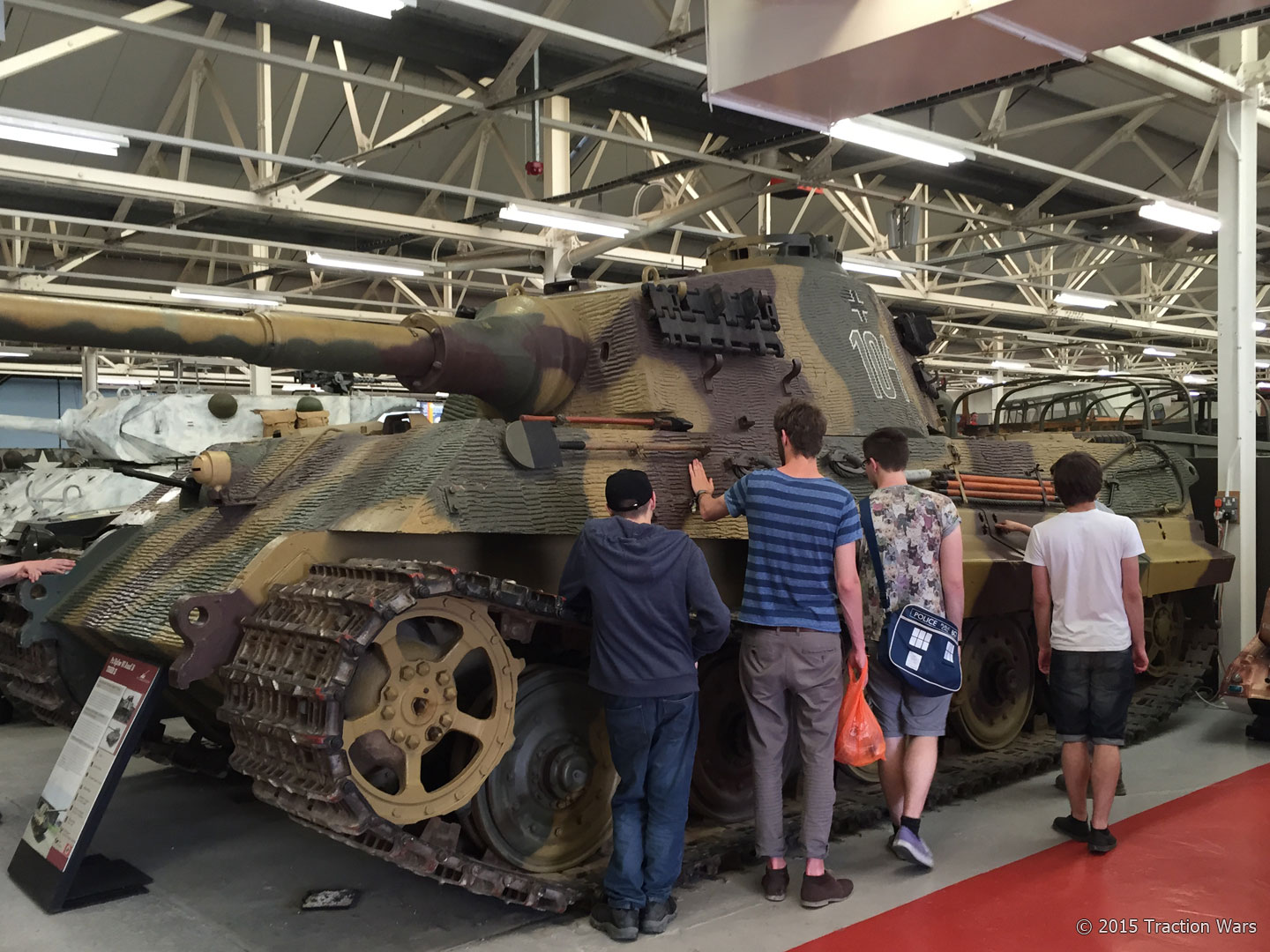 Reflecting on a
King Tiger 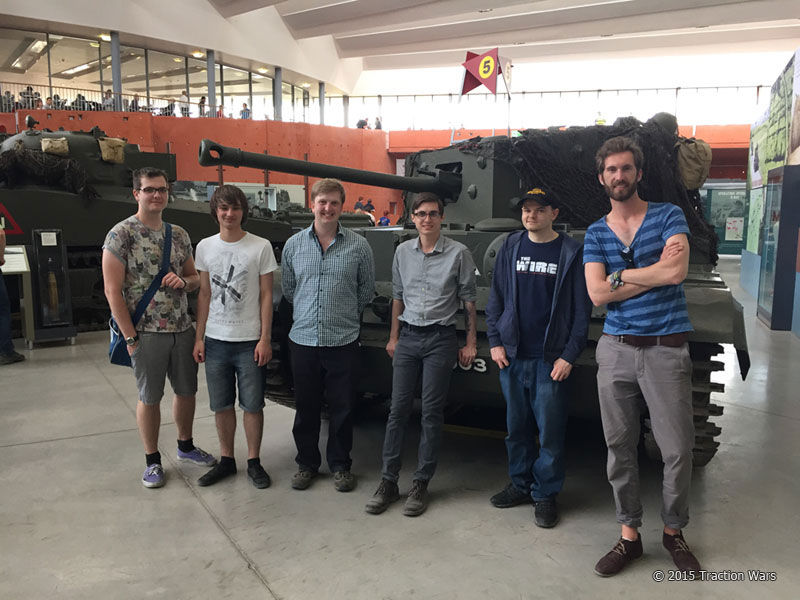 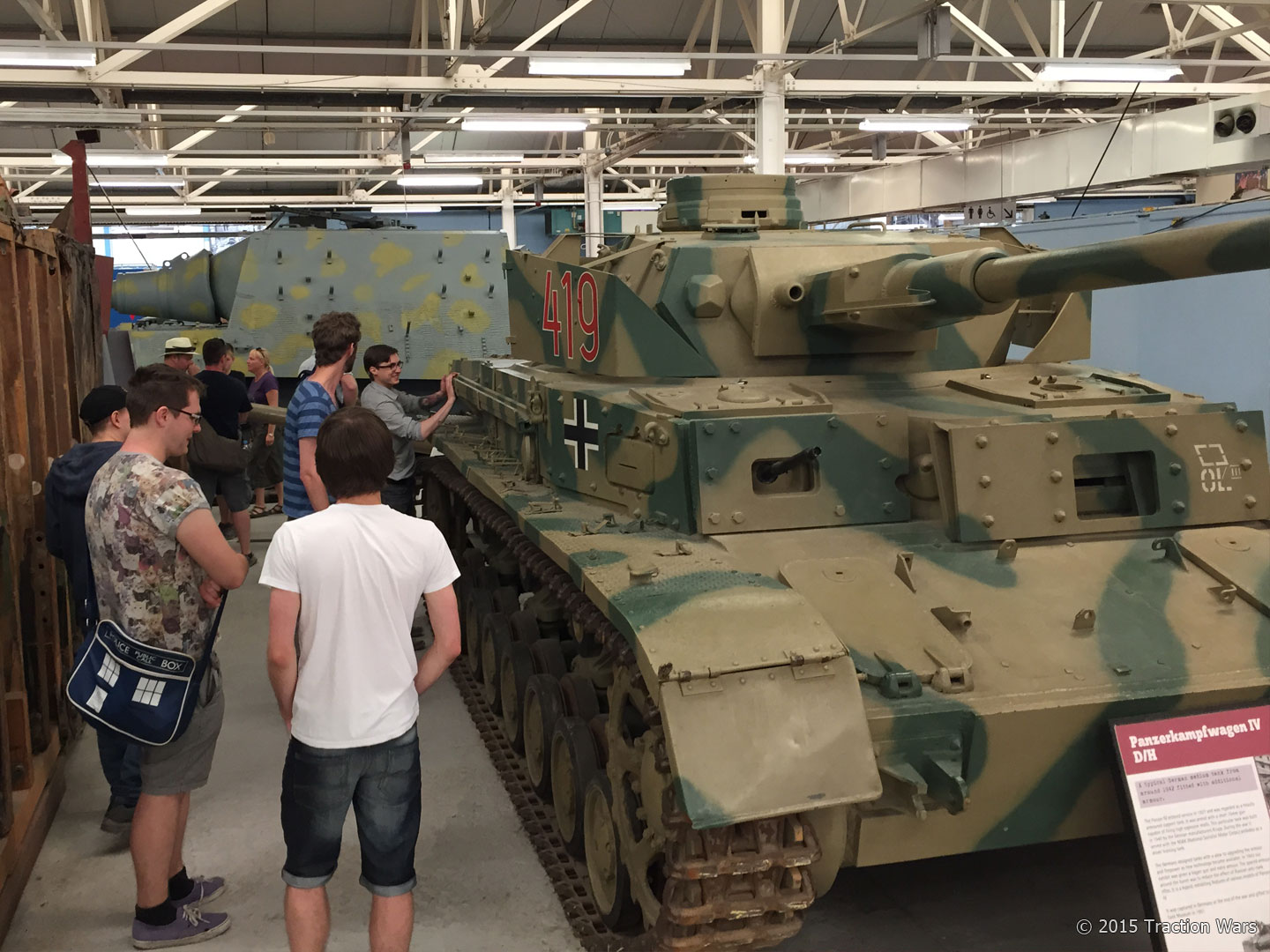 Taking a closer inspection of the Panzer IV.

At the end of the day we carried out a tactical withdrawal to a local pub to rehydrate and have a more formal development meeting over food. We won't spoil the fun by telling you the details but topics of conversation included; health, immersion, interface/controls, multiplayer interface and (most importantly) ways to speed up the development process & the upcoming schedule of news updates.

We all had a fantastic day and we look forward to sharing with you over the coming months the results of the decisions made during the day.

Just below the video, the top left picture is a Panther, correct? The king tiger is larger i believe

Look at the gun mantlet, it's a King Tiger.

The turret does look a biiit weird, though.
Was it turned to the side, slightly?

King Tiger is badass. Also it's nearby 70 tones and extremely armored, close to "super-heavy" tanks category.

It is also mostly useless outside a frontal engagement and you'll probably be walking from or even to the battle. :P

Well it is understandable if you are not to familiar with tanks, to think it is a panther V at first glance from this angel, because of the front and tracks. But of you look at the turret it is more round shaped than the panther that is more flat shaped on the side and top.

I'm very familiar with tanks. I just assumed it was the Panther because, from that angle, the gun mount appears to sit further forward and almost seems too small for the chassis which is a characteristic of the Panther. Also, I thought the King Tiger had a higher, more rounded turret, whereas this one appears to flatten out slightly at the top rather than fully round out. I may be wrong though, never seen a tank like this from such an angle.

Oh man id have love to gone to this.

It was a fantastic day out - even without the constant discussions of the game's development :)