An update to news regarding the "Deus Ex - Survival Mode" mod, being developed as a tech-demo for TREM.

First off, I would like to make one thing clear:

DXSM and TREM are not dead.

So, I can't blame you for wondering what's been happening since the last news post. Well:

But, enough small news, the BIG news is what you wanted.

Carrots may not feature in this mod, but you can still easily pick out the vital items out in the dark - any inventory pickup now has a neat blue aura around it. Also, your frobTarget will have a large orange glow around it, like the medical-bot here. 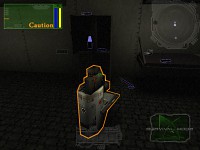 The glow will only display on items that can be traced to without hitting a wall, so objects will glow in a 360o radius of the players location, regardless of where they look. This is in-efficient, but will be fixed later, or in TREM-MP.

No, this mod doesn't feature rainbows either. However, the user-interface for the game is heavily colour customisable - to the point where there is over 700 possible colours for the user interface at present. You can have the default user-interface style - 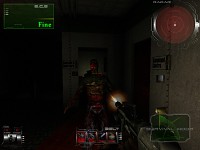 Or a user-interface in a colour of your choosing. Here are just a few examples - 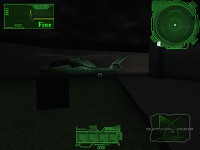 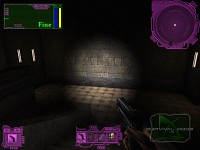 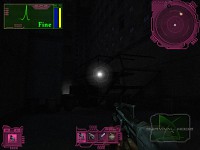 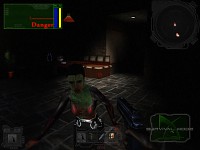 Truely, quite a diverse pallette.

As well as severe modifications to the firing system for weapons (AOE_Cone type weapons are no longer limited to firing out 5 bullets or 3 projectiles, for example), there are new toys available to the survivors. These include such gems as Anti - B.O.W. gas - which instantly kills standard enemies dead (available as single-use grenades and bazooka rounds) a flamethrower that will attach fire to flammable surfaces on the level, and a nano-sword powered by the life energy of its user.

There is also a relatively rare sight for Deus Ex Mods: a manual-operated turret. 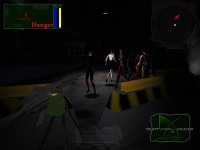 There is to be two types of turret: Heavy Machine Guns (like this), and miniguns. The difference being... the mesh, miniguns doing marginally more damage, needing spin-up time, and overheating faster than their H.M.G. counterparts.

Yes, there is much more in the works.

Here's hoping to keep you more updated than we have done recently!

lol how the hell did you manage to modify Deus Ex's UI files, they're a mess. Love to know how you did it.

It's a lot of effort, mostly a fair bit of:

Though I do agree - DX's UI files are a right mess. D:

I am so impressed with this mod!!
The changes and modifications you have made are incredible! Excellent work!
One thing I will ask, will the mod include bots at some point?

We're hoping so - I'm going to check out HardcoreDX's bots, see how much can be transferred to DX.

Failing that, it looks like I'll be nosing at UT's bot code and going "...whaaaat?" the whole time. :P