As the second part in our alien "reveals", we give to you the Skulk!

Posted by TychoCelchuuu on Aug 6th, 2009

He's everyone's favorite wall-hugging murderer and he's looking more handsome than ever. As most of you know, the Skulk is the default character class and main element of the alien fighting force. He is fast, able to hide and ambush and has a powerful melee attack. But with no ranged attacks and without a lot of health (although he's a bit tougher than in NS1), being effective as a Skulk is all about knowing when and how to attack and being skilled enough to get close to the target. Pervasive vent and ducts systems help him choose when and where to fight and also provide a quick escape.

Here's some concept art showing how he started his new life: 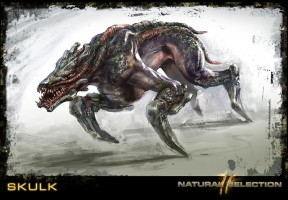 ...and here are some renders showing his finished model and texture: 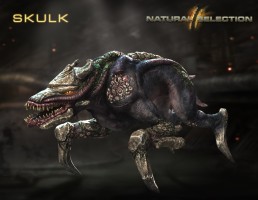 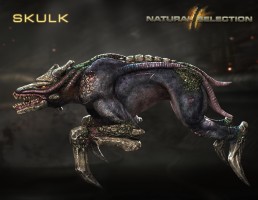 Here's a video showing him in action:


The Skulk's abilities are pretty similar to those in NS1. He's such an important class that we're a little timid about giving him crazy new abilities (although new ones are always under consideration). Wall-running Skulks can drive their sharp leg spikes into crevices to walk on walls or ceilings as if they were the ground. It doesn't cost energy nor does it slow you down, so it can be used to dodge gunfire, confuse enemies or hide. You can get a glimpse of wall-running in action with the Skulk running up the wall behind the Onos at 0:41 in our teaser video.

Bite With his powerful multi-hinged jaws, he can deliver a lot of damage very quickly. As in NS1, the Skulk player's view is from inside his mouth (is this really that controversial or weird?). We're still not sure what his alt-fire for Bite is going to be. We've talked a lot about a grapple type of attack where he could clench down on a marine and do damage to him over time, but that seemed too annoying from the marine's perspective (and how would he shoot the skulk off of him?). Please give us some suggestions.

Leap The Skulk can leap short distances quickly, landing in a pounce and doing damage to its target. In NS1, leap appeared later in the game – now he always has it. Coupled with wall-running, leap allows good players to traverse the map without ever touching the ground.

What about 'site?! You'll notice that he no longer has Parasite. The reason we currently don't have it as one of his abilities is because we think it's better for the Alien Commander to be scouting (which is the main purpose of Parasite). I really like the secondary purpose of it though, which is to do a small amount of ranged damage to kind of goad a marine into (hopefully, very stupid) action. I would love a kind of provoking ability for him here and will probably put one in later if we come up with an appropriate one.

Finally, we wanted to show you a bit of the environments the Skulk will be spending his time in - vents. We have a shiny new engine now and also because players spend so much time as a skulk in vents, we wanted to make them look a lot cooler. Here's a concept piece Cory painted showing yours truly in a modeled vent (click the magnifying glass in the lower right to get an even higher-res version for your desktop). 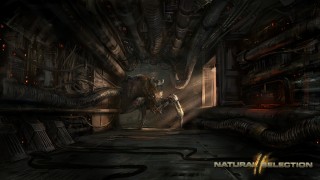 oh my god! i love those animations!

Fucken aye!
Sounds awesome as hell but I'll miss the parasite, it was always fun to kill marines with it before an onos can devour him; it's good for a laugh.

I doesn't seem quite the same to me. I kind of imagined it going in a different direction. Rather than a sinewy dog, I was thinking it would look like a skeletal rat-ish creature.
Regardless of perceptions, it's a great job. I can't wait to see more.

Wow.. great job on the animation! (and texturing.. and modeling.. and concept drawing.. yeah)

Indie Devs are really starting to create some incredible work. Great work this is a definite buy for almost everyone that enjoys fps.

You can preorder it and get access to alpha and beta and early SDK tools :P
20$/40$

That is, access when they are released. NS2 has not reached the point of any released content in the form of an alpha nor the tools, but the $40 will give you access the moment they do.

Very nice animations and really like the concept art especially the vent one :)

Can't wait for this game, will probably plunk down the 40 beans when the alpha is released.

Reminds me alot of a mini Onos in NS2. Quality work, Unknown Worlds, you got my money for NS2.

I like the idea of a grapple attack, perhaps you should make the grapple limited via only from the back.

Give the grapple a really small sort of 'hop' onto the enemies back to make it easier to target with.

Now for the marines, I've been thinking about possibly going into third person view when this happens and you press the USE key to lunge yourself backwards (of course aiming yourself for a wall first) to slam the skulk into a wall, popping it off and giving it a good bit of damage.

Although keeping it in first person mode with a sort of like... slime around your screen indicating that you've been grappled or something (plus staggering movements by your view) might be better so if you're assaulted by multiple skulks you can still defend yourself while you try to get the other one off.

Now being on the marine, I think the skulk should probobly take increased damage so that it dies if some other nearby marine shoots at it a couple times to get it off the marine. This makes it so that marines who travel away from the others are a more viable target for skulks and promote teamwork with the marines. Also: as the skulk grapples the damage should start out at a slow counter of damage per second and then slowly ramp up if the marine chooses to ignore the skulk as it bites through all the armor.

This whole situation is similar to L4D's hunter pounce except there are ways for both characters to continue controlling themselves afterward. (Perhaps after a few seconds of the skulk grappling someone they have the ability to leap off.)

My thought for the grapple was to give the marine the ability to slash and throw the skulk off him/her with the knife. ( Primary fire once or twice to get the skulk to loosen its grip, doing some damage to it. Then alt fire to throw it off sending it in the direction the marine is aiming. )

Although I am going to say I will miss parasite.. loved using it. At the moment I have no ideas on a replacement.. although I noticed no mention of Xenocide.. Makes me wonder if it is still going to be in or not?

Early on in NS1 it was good but later when the marines get enough upgrades it kinda gets a little useless.. although it can help in weakening things for the rest of the aliens..

A idea to help the aliens counter the marines in the beginning could be "calls" made from any of the aliens, to identify the marines and possibly be used to confuse them by roaring at them from inside vents.

I think a way for the Clench attack to work is that as the Skulk is on the marine, it does more damage but at a slower rate, and can stay on him while moving. But this can be used best for stealth attacks and can make the marine aim around like crazy to get it off of him. Maybe in order to counter the attack, the Skulk could be treated like a Hunter in L4D, in which a partner kills it for you. That would encourage more teamwork.