After countless issues, the Cat-Life Beta has been scaled back to a short demo. This being the case, and the bug issues that continue, I feel the matter needs a new direction.

Today I had a short chat with BiGToM as he sent me the latest work on Cat-Life for our November beta release. I must admit, I was disappointed.

Though the team has worked hard to develop this project, the planned beta has been scaled back to a short demo. This demo consists of a three map training course and five of the original maps that BiGToM developed when he first started work alone back in 2007.

There are several additional bonus maps that can give the player a good idea of what the final project should look like. I recommend cat_introbeta1.bsp and cat_living.bsp for a better idea of the project's actual map and story line introduction.

I want to discuss some of our chat and then make a few comments of my own here.


First, this is indeed a DEMO and not a beta. Second, it is a short demo with more limitations then I would have preferred. The main game maps are the same ones we have shown in the screen shots and videos to date. And feel a bit thrown together rather then tied together by the story. 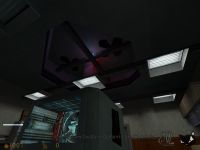 This is largely due to the fact that the actual game story changed when DS began writing for the project. BiGToM's original story idea was basically as follows:

The cat begins inside of a pet carrier on a transport train. As it progresses, a crane transfers the carrier to a conveyor belt that delivers the cat into the bowels of Black Mesa. Near the end of the line, and after a number of transfers, the cat is one of several crates on the brink of delivery into a test facility when a robotic arm transfers it instead to a waiting scientist.

From that point, the cat experiances the Resonance Cascade from inside a lab and then must escape.


Portions of that story can still be seen in this demo, but not in its entirety. Unless I am gravely mistaken, the story was changed to a scientist's pet cat and this idea is reflected in the cat_intro and cat_introbeta1 maps which allow you to see a part of a different introduction sequence, one that even pre-dates Newton's name. Keep an eye out in the living area bonus map for Easter Eggs, which reflect the gags of the final project's secrets.

BiGToM made the decision to switch over to a demo largely due to bugs. He explained that there are simply too many bugs to fix at this time. I think BiGToM would like some help in debugging maps and sounds. It's my understanding that part of the reason the demo has so few custom sounds is because of a problem with his sound editing software. 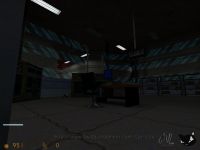 I have already explained the bugs with my source code, but there are apparently a number of additional problems. For example, BiGToM points out a bug on the cat4.bsp map in the demo in which the player must duck to enter a tram even though he raised the door height. The cat source code only gives the illusion of shrunk height and so the player hull is still full sized, but this is a human sized door and should not be a problem.

He also tells me there is a problem with the elevator near the end of the actual full game in which the elevator walls injure the player.

This seems to be unrelated to the code as he elected not to use the modified hull file and scaled hull idea. Instead, we are using the Half-Life friendly version of the dlls. Which does indeed mean that players can play in regular HL and enjoy the game. You'll want to use the console to enter map c0a0 for the HL Campaign and map t0a0 for the HL training course.

Keep in mind that you will need noclip to get passed the HEV checkpoint in the HL campaign since you can't pick the suit up anymore [player spawns with a suit].

I think players will have a little fun with this, especially playing the original HL, but they may be disappointed by the very short nature of the demo and a lack of action or changes. Most of the monsters and/or items have not been added yet.

I myself was disappointed as much of the custom content is absent and I feel that the project has hit a bigger problem then just source code or map bugs. I do recommend that you download the demo and enjoy it. BiGToM has explained that his plan is to release a "map pack" once he has more of the bugs defeated.

In fact he said, "all the maps are basically done so all I have to do is tweak them some, add monsters and sounds, etc. 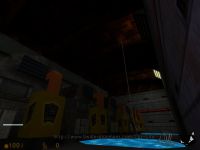 I asked BiGToM if he had any plans for the cheap clones I made for the eventual extra monsters... three headcrab clones and a zombie clone that could have been further refined to "friendly cats", "juvinile headcrabs", "zombie cats", and "military dogs". He said that if we can find a new modeler, we could possibly create a sort of pet laboritory with an outbreak of the headcrabs and the resulting zombies. He hopes this idea will be usable in the future but is not in the project as it stands. 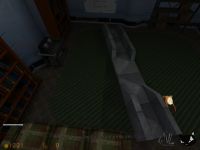 Keep an eye out for bugs while you play and report them to sayrken[AT]hotmail.com And if you have something to contribute such as :SysOp: has offered to work on a custom HUD, please contact BiGToM via that same address. I'd love to see this project finished and in far greater quality.

However... I have some personal feelings about this and as I said before, I am now disappointed. You do not want Mr Wildcat to be disappointed.

During my discussion with BiGToM we spoke about the "addon map pack" and his hope for the sequel project. I share his enthusiasm for a successful project, but I also am not satisfied with the current project.

For all that has been discussed previously, :SysOp: had some valid points regarding the project as it stands. Despite all of the customization, we won't be able to see that in the demo. And I'm worried that the final release will not have everything we would like either. And I need to admit that I really do agree with his point that the source code should come first. Maybe its because of my programmer background, but I think any truely good project needs the source code to really develop a proper game.

Truthfully, I feel that the project is no longer what I personally had hoped it would be. So, with BiGToM's agreement, I am now actively seeking a Source coder.

If you have been by our site recently, then you know I am in the process of changing the site into something more then just a Half-Life fan site. BWL Development is growing and improving, so too should our projects.

It is my intention to write a more serious and dark story for Cat-Life. If you want to know more about my type of story telling, then here are some options for you. Be WARNED, these stories are all rated M for Mature and contain violence and graphic descriptions.

Conundrum - around half-finished, this is my HL fan-fic in epic novel form. It was based on a forum RP thread and is basically a crossover story for HL, D00M, and my own characters and features many character creations by our forum members from years ago.

Mod-Fiction - this is a set of two mod fan-fictions. One is a fan-fic for Cat-Life and the other is for GargArena.

Delivery - this is a short 1-shot HL2 fan-fic that began as a forum rp-thread on the old Concerned forums.

This code would then be used in the source alternate Cat-Life and it's sequel Cat-Life 2.

I also want someone that isn't affraid to write extra code on their own. Feel free to create for this mod project. Chainsaws and grappling hooks have no part in the main story, but they would make a great bonus for finding secret worlds and secret areas as a sort of gag or comical reward.

If you can map for source, make models, sprites, sound, music, etc... start thinking about this project. Can you make a cat player model? Go ahead, we could use it. Can you make Half-Life style music? Get started, we'll either use it in Cat-Life: Source or we'll use it in one of our upcomming machinima projects. We WILL FIND A WAY to use your work and of course credit you for your contributions.

And, by all means, ask anyone you know that may be able to contribute to the new source code. We WILL NOT proceed beyond my story development [which I have not yet started] until we have working code.

I welcome existing Team Cat-Life members to offer their aid as well. I know that some of them including BiGToM are anxious to work on this newer incarnation too.

So, in closing, expect a Cat-Life "map pack" and we welcome any help on said project. But also be on the look out for a Source coder. Cat-Life: Source will be a completely different game and we hope it will live up to the BWL tagline of Epically Awesome in Every Way. And we certainly welcome wishes of luck and showes of support.

Help when i start up a game on cat life the console says cant open learn text file or what ever please help it wont let me play!

learn1.txt is a reference to an overview file because the SDK has the option to code a map overview. It isn't used in the mod, so that shouldn't be your problem, there is probably some other issue. What happens when you try to start? Have you installed HL and played it once? What are your current game settings? That sort of thing.

this is exactly what was missing in my life XD
If a headcrab bites now a cat, does it become a catcrab or a headcat....

You write the story and design the game as you wish. Characters, places, dialogs, story bits, so on and so fourth.

Once you are happy with the script, then... you will need a coder to create the new stuff you need. Same for modellers, animators, ect.

Then... when you have a nice base to work with, you start to create the levels. Level design is where code, 2d/3d art and story meets.

Writting a story having in mind coder's skills will be a _tremendous_ limitation.

Downloaded the demo, gonna check it after ;)