Hello people out there! In this article will be a first and more detailed approach to what the first culture of the mod will be: the Aztecs!

Hello people out there! Today we’ll be sharing with you some information and a little bit of the advances done so far by the Return of the Gods Team. That’s right we are a team now, it is not anymore, a one-person project, we are a small team but at team after all. we’ve got 2 new members who are: Yiome who is now doing most of the modeling and NateE our new Programmer.

Now what is this new entry about?

Well, as the tittle may suggest this article will be a first and more detailed approach to what the first culture of the mod will be: the Aztecs! Note that this entry will mostly talk about general culture aspects and won’t say much about Gods and mythology aspects, that will be for another time.

Now, when we think about the Aztecs we may immediately think of jaguar and eagle warriors, pyramids and human sacrifices, brief that military empire who settled in central Mexico and was utterly conquered by the Spanish.

Well this vision is partially true and partially fake, so this is when we start decodifying the Aztecs. There are many versions of the Aztecs origin myth, but according to the one that we will be using, Aztecs first inhabited the city of Aztlan (land of the heron), later they abandoned their city to start a large pilgrimage. The word Aztec then means habitant of the heron’s land, The Aztecs were composed of 7 different nahuatlac (nahuatl speaking) tribes, which were:

One of those names may sound familiar: the Mexicas, so the Mexicas were the biggest and most important tribe, they are the ones who built the biggest empire of Mesoamerica they were so important that the name Aztec is used as a synonym of Mexica. But as we can see the Aztecs were more than just the Mexica, as an example, the Tlaxcaltecs were Mexica’s worst enemies and were never conquered, in fact they allied the Spaniards and greatly contributed to the fall of the Mexica empire.

So, the Aztec civilization will be mainly based on the Mexica empire, however we also wanto to include features of the other Aztec tribes.

Following the myth, the 7 tribes arrived to place called Chicomoztoc meaning place of the seven caves (according to some versions Aztec tribes emerged miraculously from those caves). Around the XII century the seven tribes started to abandon Chicomoztoc and migrated to the center of Mexico where they settled. Once there, they got fusionated with previous civilizations mainly Teotihuacan and the Toltecs. From them, Aztec tribes adopted gods (such as Quetzalcoatl, Tlaloc and Tezcalipoca) they also adopted customs and ways of life like the warrior societies and social organization. The Aztec tribes started erecting great and powerful kingdoms and empires, the first tribe to arrive were the Tlahuicas who founded a kingdom with capital at the great city of Xochicalco, years later Acolhuas arrived to the valley of Mexico and founded the first Chichimec empire, it’s capital were the cities of Tenayuca and Texcoco. Acolhuas were later defeated by another tribe, the Tepanecs, headed at Azcapotzalco. The last to arrive were the Mexicas, they founded their cities Tenochtilan and Tlatelolco in the lake of Texcoco. At first they were vassals to the Tepanecs and later they defeated their previous lords to became the biggest, bloodiest and most tyrant empire of Mesoamerica.

As we can see the story of the Aztec tribes is more than just that of the Mexica, this story will be featured in the Aztec campaign: Mexicas, the empire of war; which will tell the story of the Mexica tribe, starting with their pilgrimage and their settlement in the valley of Anahuac until they consolidated their civilization as the biggest empire of Mesoamerica, the campaign will feature many of the Aztec tribes as well as their fights.

The rest of Aztec tribes will be shown for example in the names of Aztec AI players:

As you may notice Tlaxcallan is not in this list of cities, that is because we have special plans for the tlaxcaltecs which will be revealed later.

Aztec culture units will speak nahuatl, getting the nahuatl voices is proving challenging since there are not a lot of nahuatl speakers in the world and also the Aztec voices from AOEII and AOEIII cannot be used since it is not nahuatl what those Aztecs speaks, it’s some sort of invented language. We have been researching a lot about nahuatl language and we have also got in contact with some nahuat teachers so we can have a proper grammar, structure and pronunciation.

Here some examples of nahuatl phrases:

Aztecs will mainly gather favor by sacrificing captives, captives are acquired through fighting. All warriors and warrior priests have a chance of capturing enemy units while fighting. Captives are then taken and sacrificed either in altars or temples. There are two kind of captives: simple captives, taken from villagers and weak military units and high-status captives, captured from elite units, high status captives produce more favor than regular ones.

Aztecs can generate extra favors by building Tzompantli (Rack of Skulls) one becomes available at age I and another one at age IV for a total of two. The tzompantli will generate a small trickle of favor which will help but won’t be sufficient to replace the sacrifice of captives.

The Huey Tlatoani (great speaker) is the leader of the nation and will grant special favor similar to the Egyptian pharaoh. Unlike the Pharaoh, the Tlatoani won’t grant economic favors, his main role will be to boost the faction’s military such as:

He will also have support role:

He can also transform into a Nahual (Myth Unit) by paying a cost and he can return to his Tlatoani form by paying another favor price. In Mesoamerican civilizations, there was the belief all humans are born with an animal spirit, this spirit has the task of guiding and protecting it’s person. The are some people (like god, witches or kings) which were believed a really strong connection to their nahual to such a degree that they could transform and take the form of their nahual. So the tlatoani will be able to transform into a nahual, which will be an animal bigger than regular ones and obviously stronger.

Here are some pics of how the tlatoani looks so far: 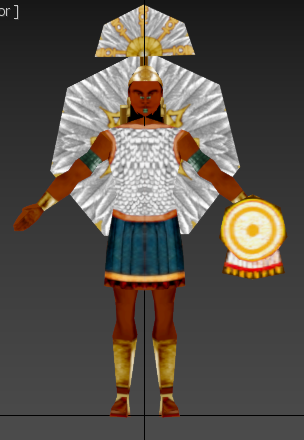 and the ingame tlatoani icon:

To complete their hero roster Aztecs will also have three kind of warrior priests. This units are not as strong or specialized heroes as the greeks, but rather they are fairly cheap and only about as powerful as the other military units (like norse hersirs). Warrior priest can also capture prisoners while fighting.

Here a preview for the age I priest:

Aztecs lack cavalry to cover this role they will have some runner units which will be fast infantry good against archers and light infantry similar to AOE2 eagle warriors and AOE3 coyote runners.

Aztecs will train military units from two main buildings: the Telpochcalli (commoners’ barracks) and the Calmecac (noble’s academy). The first one will allow to create cheap fast training units to be used during the early stages of the game. The second one will create more specialized but also expensive noble knight and priest units. In addition, each major god will grant a unique unit in the final age just as the Greek major gods, major gods will also grant different military bonuses.

Tezcatlipoca -> Skull knight – armed with a tepoztopilli (halberd) is good against buildings, cavalry and runner units.

Huitzilopochtli -> Cuachicqueh (Shorn warrior) – armed with a shield and a macahuitl is strong against infantry, deals area damage.

Quetzalcoatl -> not yet decided, it should be a unit for countering ranged units.

Aztecs will start the game with two or three villagers one tlatoani and one priest which can be used for exploring.

Military instruction at the Tepochcalli was mandatory for all of the macehualli (peasants). Therefore, macehualli can turn into tlamanih spearmen by paying a cost and pressing a button (like Norse villagers turn to ulfsarks). This way they can defend themselves from cavalry raids, but they cannot get back to peasants, so you sacrifice economic production to increase military strength.

Aztecs won’t have infantry upgrades such as medium, heavy or champion. Instead Aztec units will rank up by capturing prisoners. Each prisoner a warrior captures will increase his strength (just like hydras).

Since ancient American civilizations didn’t have coin, they will sell and purchase resources at the market by barter. They can exchange any resource for any other resource: wood – food, food – coin, coin – wood, etc. 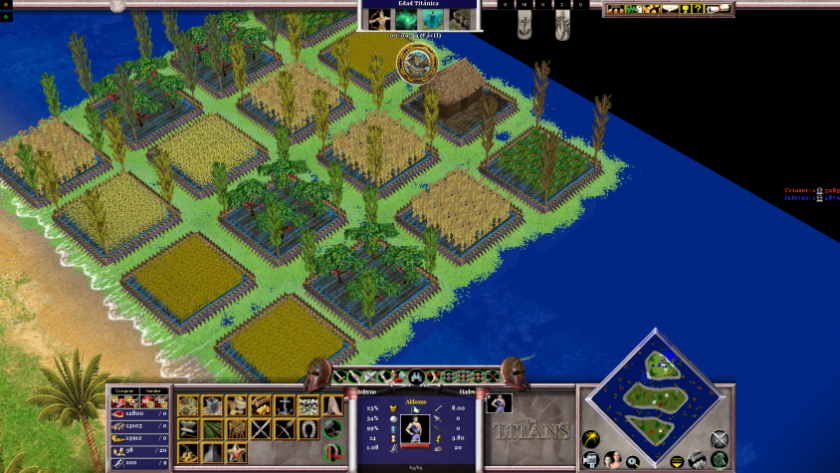 Here some previews for the villagers, male and female:

Villagers will hunt using an atlat:

and will carry resources with a cacaxtli:

We have set a goal which is to have the first age of the Aztec culture ready by 21 February so will be woriking during a month to achieve this. Our next mod update will be by then and we will be uploading a video showing a gameplay of the aztec culture during age I.

That's all for today folks!

- The Return of the Gods Team

I just bought this game on steam!, I would love to see how this turns out

So good to see a really serious aztec mod in AOM !! I dreamed of this idea for long time, and I found several idea of gods, unit and myth unit, If it can inspire... (I had the same ideas for sacrifice, in order to gather favor, for chinampas on water and : an incredible possible gameplay :) I had the idea of human skull warrior like in AOE3 (with a special attack like minotaurs (?). standed Cipacli as Titan, Axolotl water or amphibian myth unit (ability ?). Ahuizolt (amphibian ?) myth unit, able to manipulate (convert for short time ?) ennemies with it hand, tzitzimitl fast myth unit with 2 knives, able to decrease speed of near ennemies with fear. Centzon Huitznahua myth unit, looking a little as archon from starcraft (?), Centzon Tōtōchtin : rabbit which are gods of alcohol (ability ?), earth giant able to throw little meteora as ability (with long time reloading of course), Tlaloques, which are servants of major god Tlaloc : (they are 9 max in myth) amphibians citizen able to fishing and gathering food faster in rainy field , why not making defenses (towers, walls, gates) on water with dams), Civatateo : a ghost women lanching skulls : similar to norse trolls. Chalchiuhtecolotl an aerian myth unit. As powers : colibri scouting for Age 1, volcanoes, and ruins for last age. Ruins is a power which transform an ennemy fortress building in extremely slow and resistant myth unit : able to throw arrows like fortress buildings (or something else ? I imagined a powerfull arm able to hit severely building), and which can make dead mounted conquistadors (with guns as in AOE2, skeletons horses and with limited time) . But I'm so bad for modding... My ideas are maybe impossible to realize or you have no doubt other good ideas. Anyway,I will follow this great project ! So Good luck, and sorry for bad english :)

This answer comes a bit late but it might surprise you we already have many of your ideas planned to appear in game. The centzon huitznahua, centzon totchtin, cipactli, tzitzimine as well. I can't say a lot without doing lots of spoilers :D. But I'm sure you wont be dissapointed with the final result.