New zombie- it like to ambush the unwary thief in the night! And... new missions!

Sorry we haven't updated before this, but a lot has been going on since the last news update! The team is working hard on the first update to TDM 1.0. Springheel has been adding some more zombie types to the game, and Crispy has been setting up "sleeping" behaviour on them, so zombies can suddenly get up and ambush you. 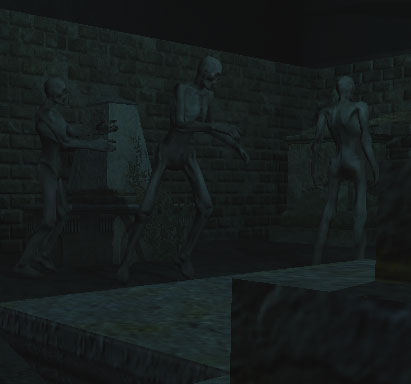 More excitingly, a number of completed missions for our Christmas Contest are starting to roll in. "The Parcel" and "Too Late" were the first, and "Trapped!" has just been released today (see our FM forum for specific download details). At least three other maps are in the beta-testing phase and should be released soon. While these contest maps are generally small, it is exciting to see what people are doing with only a few weeks of exposure to Dark Radiant! There are two other, larger maps created by team-members which should be released in the next few weeks as well.

Since the downloads page on the website is too slow to keep track of every mission released, Sneaksie Dave has started a wiki list of all completed missions. Check it out if you want to stay up to date on new releases.

The zombies in Deadly Shadows scared me so much that I never played beyond the Abysmal Gale level.